The quality criteria for herbal drugs are based on a clear scientific definition of the raw material. Even though global herbal resources have a great potential as natural drugs and are of great commercial importance, they are very often procured and processed without any scientific evaluation, and launched onto the market without any mandatory safety and toxicology studies. On that basis, an attempt was made on a well-known herbal drug A.nilotica flower and A.leucophloea flower by evaluation of phytochemical and toxicological parameters like heavy metals, aflatoxins, total microbial load and pesticide residues.

The procedures recommended in AOAC, ASTA were followed to determine analysis of heavy metals, aflatoxins, microbial load and pesticide residues. Thin layer chromatographic technique was used to separate the chemical compounds present in the drug.

Results obtained during this experiment revealed that heavy metals, aflatoxins, total microbial load and pesticidal residues were variable but found within the prescribed limits. Phytochemical evaluation revealed that the catechin phytoconstituents is absent in A.leucophloea flowers when compared with A.nilotica flowers. Hence, there is an urgent need for mandatory evaluation of these parameters in every crude drug before further processing to ensure safety and efficacy of Indian medicinal plants for better acceptance at International platform. The study revealed specific identities for the particular crude drug which will be useful in identification and control to adulterations of the raw drug.

Herbal medicines have been used in medical practice for thousands of years and recognized especially as a valuable and readily available resource for health care. Traditional herbs and herbal products have been considered to be mild, non-toxic and even harmless because of their natural origin. Like other crops, medicinal plants are susceptible to insects and diseases both in the field and the storage, so pesticides are widely used for their protection. In fact, contamination of crude medicinal plants as well as their products has increasingly been reported.1,2 This has brought concernsand fears regarding practitioner’s professionalism and quality, efficacy and safety of their treatment methods and also for the products from herbal and natural sources available in market. Because of the high cost of pesticide’ free cultivation, organic cultivation is only possible on a small scale and wild raw material is of insufficient quantity to meet the needs to the herbal drug market. The ever increasing consumption of medicinal plants necessitates large scale cultivation of medicinal plants which is not possible without use of pesticides. Attentions usually focused on contamination by organochlorine pesticides (OCPs) due to their toxicity and persistence in environment and contamination by common pesticides.3,4

Similarly, aflatoxins (AFs) are secondary metabolites produced by fungi Aspergillus, particularly flavus and parasiticus.5 There are four naturally occurring AFs, designated B1,B2, G1 and G2 with AFB1 the most common and toxic. The carcinogenic, mutagenic and immuno-suppressive effects of aflatoxins on several animals have been fully documented.6 Human liver cancer and levels of aflatoxins in the daily diet are strictly correlated as epidemiological studies.7 Furthermore, previous works show that aflatoxins levels are not reduced by domestic cooking with either microwave or conventional gas oven heating8 and that AFs do not decompose at the temperature of boiling water during the preparation of the drink.9 It is therefore important to have a simple and quantitative method of analysis to control levels of aflatoxins in food. In 2002 European Regulatory sets maximum limits for spices (Capsicum spp., Piper spp., Myristica fragrans, Zingiber officinale, Curcuma longa) (AFB15 g/kg; total AFs 10 g/kg) (02/472/EC). It is therefore imperative to ensure quality of the preparations derived from the traditional plants by using modern techniques and applying suitable standards.

Standardization of raw drugs in herbal industry is an important step towards quality control. Several analytical parameters such as physico–chemical constants, estimation of elements, heavy metals, microbial contamination, aflatoxins and pesticide residue are to be carried out as a measure of quality check. The World Health Organization10 emphasized certain quality standards and has proposed certain guidelines for the assessment and development of standard herbal products.

Acacia nilotica and Acacia leucophloea belongs to the family Leguminosae. It is a moderate sized tree much fissured, spines long, straight white, sharply prickled. A. nilotica flowers are yellow, fragrant in axillary and with globule heads. A. leucophloea flowers are creamy yellow, fragrant in axillary and with globule heads.11 The ethno medical information states that, the parts of the tree find use in diabetes, skin diseases and leucorrhoea. These are also used as an antidiarrheal, antidysenteric, antidiabetic. The stem bark is an astringent,12-17 used in ulcers and wound healing18,19 as an antidote to snake bite,20 in dysentery21 and for tooth ache.22 In the present paper an attempt was made for analysis of heavy metals pesticide residues, aflatoxins, microbial load and phytochemical assessment of A.nilotica and A.leucophloeaflowers.

The fresh flowers of A.nilotica Linn, A.leucophloea Willd were collected from various domestic places in Thanjavur district, Tamilnadu, India, in the month of August 2009. The flowers were identified by Taxonomist, and authenticated by Prof.P.Jayaraman, Botanist, Director, Plant Anatomy Research Centre, Tambaram, Chennai, India. A voucher specimen number was PARC/2009/2093 and PARC/2009/2094 and it was deposited in CSMDRIA at Chennai for the future reference.

The procedures recommended in AOAC23 were followed to determine analysis of heavy metals, aflatoxins and pesticide residues. The powdered samples were weighed (each 1 g) into separate conical flasks and treated with 5 mL of concentrated nitric acid. The flasks were covered with watch glasses and heated for an hour; the contents of the flasks were treated with additional 5 mL of nitric acid, followed by 2 mL of 30% hydrogen peroxide solution. The heating was continued till the clear solution was obtained. The mixture was diluted with deionized water and filtered through Whatman No. 42 filter paper and the solutions were made up to 50 ml.24

For determination of microbial load, 1g of each sample was weighed accurately in separate flasks and 99 ml of sterile distilled water was added. The samples in the flask were kept in a mechanical shaker for few minutes to obtain uniform suspension of microorganisms. The dilution is 1:100 or 10-2 from, which 1 ml was transferred to 9 ml of sterilized distilled water to make a 1:1000 dilution and this procedure was repeated up to 10-6 dilution. Each 0.1 ml of serially diluted sample was inoculated to the sterile plates containing nutrient agar, SS agar and potato dextrose agar (PDA) by spread plate method.

Thin layer chromatographic technique was used to separate the chemical compounds present in the drug. Various solvent systems were checked to separate the maximum number of chemical compounds in the drug. TLC of the methanolic extract developed in the mobile phase of Chloroform:Methanol (8:2 v/v). After air drying the plate was not visualized in UV 254 and 366 nm. The plate was then dipped in Vanillin -Sulphuric acid and heated in hot air oven at 105°C till the spots appeared. 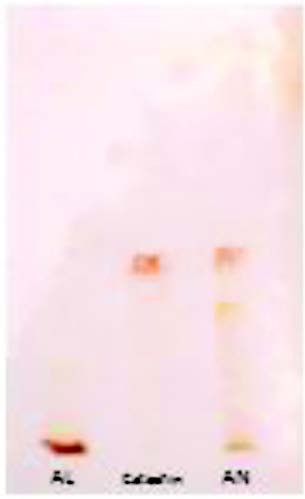 The flowers of Acacia nilotica and Acacia leucophloea exhibit a set of diagnostic characters, which will help to identify the drug in dried condition. It has been concluded from this study that estimation of heavy metals and pesticides residue, aflatoxin and total microbial load is highly essential for raw drugs or plant parts used for the preparation of single and compound formulation drugs. Plant-based traditional knowledge has become a recognized tool in search for new sources of drugs; it is clear that these herbal medicines will offer a platform for further research. So,concluding that both species (A.leucophloea and A. nilotica) can be distinguished on the basis of their secondary metabolites like catechin. Furthermore isolation of catechin is needed to explore its medicinal value in order to establish as a standard drug. Hence the periodic assessment is essential for quality assurance and safer use of herbal drugs.

We are thankful to the Director General, CCRAS,M/O AYUSH,GOI,New Delhi for the facilities provided.

[1] Conflicts of interest CONFLICT OF INTEREST We declare that we have no conflict of interest.