To establish a method for quercetin content determination of the three plant drugs from genus Sedum and to decide their best harvesting time. Dried herbs of Sedum sarmentosum Bunge., S. lineare Thunb. and S. erythrostictum Migo. are all traditional medicines from Genus Sedum. They all have long been used to cure hepatitis, dysentery, swelling poison and so on. It has been reported that flavonoids contained in S. sarmentosum Bunge. were one type of the active components to protect liver and reduce serum alanine aminotransferase level. Through the qualitative analysis and TLC assay, we have verified that both S. lineare Thunb. and S. sarmentosum Bunge. contain flavonoid glycosides whose aglycones include quercetin. In this study, a HPLC methodology was established to determine quercetin which was a common hydrolyzate of the flalvonoid glycosides in the three plant medicines. The determination method developed showed good linearity in the range of 41.2-412.0 µg/mL, and had a nice accuracy and repeatability. It indicated that the content of quercetine in Sedum sarmentosum, Sedum lineare and Sedum emarginatum can achieve the quality standard required by Chinese Pharmacopoeia.( No less than 0.01%), The results also revealed preliminarily a relation between collected season and medicine quality. Thus it could be used to control some flavonoids content in the three plant drugs indirectly. By determining the samples of the 3 drugs collected in different seasons, the optimal harvest periods could be preliminarily ascertained.

Sedum sarmentosum Bunge., S.lineare Thunb. and S. erythrostictum Migo., whose dried herbs are traditional herbal medicines, all belong to Genus Sedum. As the three plants are closely related with each other, they usually possess similar chemical components. Despite certain differences that existed among their efficacy, all could treat hepatitis, dysentery, swelling poison and so on.1-4 It has be proved that sarmentosin, a water-soluble component contained in S. sarmentosum Bunge., is one of the active components to protect liver and reduce serum alanine aminotransferase level. Many reports on the methods to determine sarmentosin have appeared, including to the IR, HPLC and GC approaches.5-7 The studies also find that the flavonoids included in S. sarmentosum Bunge.8 show a better efficacy in liver protection and the enzyme decrease compared with the water-soluble total glycoside,9 suggesting that flavonoids should also be main active composition to treat hepatitis. Through the qualitative analysis and TLC assay, we have verified that both S. lineare Thunb. and S. erythrostictum Migo. also contained flavonoids. And the preliminary HPLC analysis has shown that the three plant drugs all contain the flavonoid glycosides whose aglycones include quercetin. As HPLC has been a routine methodology to determine the active composition in natural plants both at home and abroad,10-13 in this study, we have developed a HPLC means to determine the quercetin content of the samples collected in various seasons, trying to find out the variation trends of the some flavonoids content vs. the growing periods, obtain the appropriate harvest seasons and preliminarily control the quality of the 3 medicines finally.

samples and their Sources

High performance liquid chromatography (HPLC) analysis was performed using an Agilent 1200 HPLC system from Agilent (Karlsruhe, Germany), equipped with a quaternary pump, an autosampler, and a VWD UV detector. Quercetin was separated from the sample solutions using a C18 column (4.6×250 mm I.D., particle size 5 µm, Agilent Eclips XDB- C18), with a mobile phase consisting of methanol and 0.40% phosphoric acid(49:51, V/V), at 25°C. The flow rate was 1.0 ml/min , and injections were 20 µl in volume.

About 2.0 g of dried (100°C, to a constant weight) of Sedum sarmentosum, S. lineare and S. erythrostictum. samples powder was taken and weighed accurately and respectively, then 20 ml of methanol was added and refluxed twice( each time for 30 min ).The mixture was filtered into a 50ml volumetric flask. The residue was washed with methanol (2×10 ml), and transferred to the same flask, consecutively, and then made up to the volume with methanol, and shaken until evenly mixed. After that, 20 ml was taken, mixed with 5ml of 25% hydrochloric acid solution, refluxed for 30 min, then cooled immediately and transferred to a 50 ml volumetric flask, and made up to the volume with methanol, finally shaken, filtered through a 0.45 µm millipore filter prior to HPLC analysis.

A calibration curve was established for quercetin by injecting 2, 4, 8, 12, 16, 20 µl of the standard solutions twice respectively. Linearity was tested by analyzing the average peak area of quercetin of different injection volume. And then the regression equation(y=74.431x－0.9177) was obtained，and the correlation coefficient （r） was 0.9999. Thus, a good linearity was shown when the quercetin concentration ranged from 41.2 to 412.0 µg/ml. [Figure 1]. 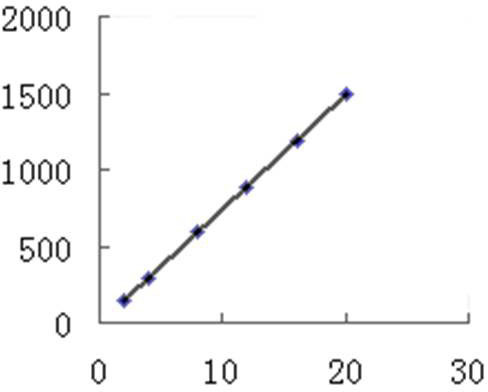 The precision was assessed by injecting 20 µl of quercetin standard solution five times respectively. The quercetin content was calculated based on the calibration curve. The content variation (RSD, %) was found to be 1.04%, demonstrating that the instrument used had a high precision.

The 20 µl of the same S. sarmentosum Bunge. sample (Jianshi, April) solutions were injected into the apparatus in a certain period of time (0,2,4,6,8,12 h) respectively, and quercetin content was calculated based on the calibration curve. As a result, the content variation (RSD, %) was 1.65%, revealing that the sample solution was stable within at least 12 h.

Five same dried samples of the three plant medicines harvested in April were taken respectively to prepare the sample solutions according to the method mentioned above prior to the HPLC determination. The consequences showed that the content variation RSD (%) of each sample was less than 2.8%, indicating a good repeatability of this method. [Figure 2, 3, 4] 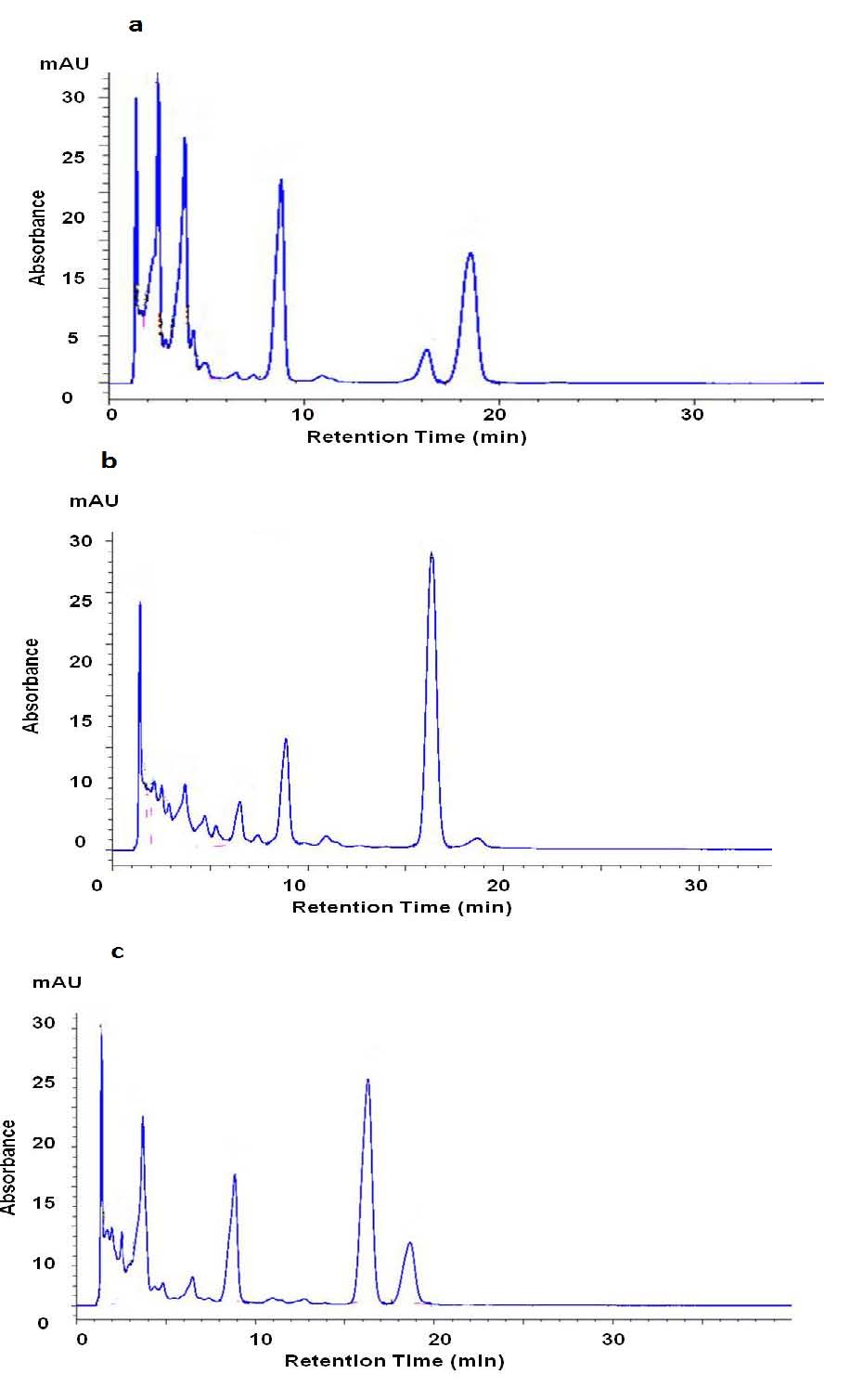 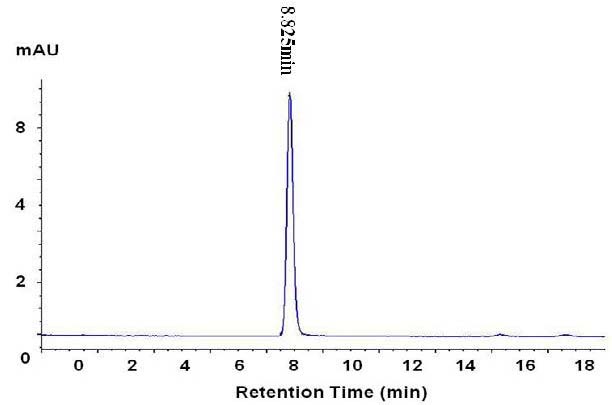 Percentage contents of quercetin contained in the 3 medicines collected in different seasons. (a: S. sarmentosum b: S. lineare c: S.erythrostictum) 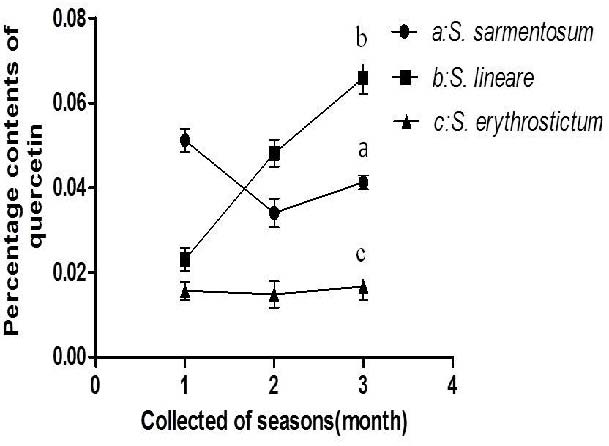 In the linear range, 1.0 mg of quercetin which was nearly equal to that contained in 2.004 g of dried S. lineare Thunb. Sample collected in June in Huangmei was accurately taken to prepare the solution for recovery test according to the sample preparation method mentioned above. The quercetin content was determined according to the above chromatographic conditions. The recovery test was repeated six times. By comparing obtained quercetin content with that actually injected each time, the average recovery was100.52%, and RSD (%) was 2.2%, showing that developed determination method had a nice accuracy.

Average retain time of quercetin peak was 8.835 min, and the quercetin standard substance HPLC peak was as follows [Figure 3].

A total of 9 samples of three plant medicines collected in different periods were determined by the developed analytical method. The results of the quercetin content were given in the following table (Table 2). And the relations of the content change and the collected months were shown as follows [Figure 2].

[i] *Different letters in same column were significantly different at P < 0.05

By the HPLC analysis, we found that Sedum sarmentosum, S. lineare. and S. erythrostictum all contained flavonoid glycosides, whose hydrolysate included quercetin. The results suggested that the common flavonoids existed in the 3 plant medicines should be associated with anti-hepatitis activity.14,15

The results also revealed preliminarily a relation between collected season and medicine quality. In detail, the quercetin content of S. lineare Thunb. went up with growing months and reached the climax in October, while both S. erythrostictum Migo. and S. sarmentosum Bunge. had the relatively high amount in April (flowering period), and were the lowest in June (during this period, the growing state of S. sarmentosum Bunge. was poor, and the leaves mostly withered), then increased a little in September, showing preliminarily that the last two would own the best quality if collected in flowering period.

In a word, The HPLC assay of the quercetin in the hydrolysate of the 3 herbal drugs could be used to control the drug quality to a certain extent from the aspect of the related flavonoids content.

The author gratefully acknowledges the financial support by the Hubei Provincial Department of education plan for Science & Technology Project (Grant no. Q20171705).