Contemporary Use of Phytocosmetics in Three Districts from North-Eastern Algeria

Amel: Contemporary Use of Phytocosmetics in Three Districts from North-Eastern Algeria

In Algeria, the cosmetic market is competitive, with an annual growth of 12%. Because of the toxicity of synthetics cosmetics, the industry is currently more concentrated on herbal cosmetics. Phytocosmetic is an important aspect of traditional medicine in Algerian culture, whose information is scanty.

The present study has been conducted to assess quantitatively the use of herbs in phytocosmetics application.

Data was collected from 300 users via face to face interviews using semi-structured questionnaire in three districts from North-eastern Algeria: Annaba, El Tarf and Skikda. Five parameters were evaluated including the demographic characteristics, the form of cosmetic preparation and, medicinal stories used in cosmetic applications.

This study is able to record the available information the importance of phytocosmetic in traditional medicine. However, further research should be conducted in Algeria, to explore the toxicity of these products. 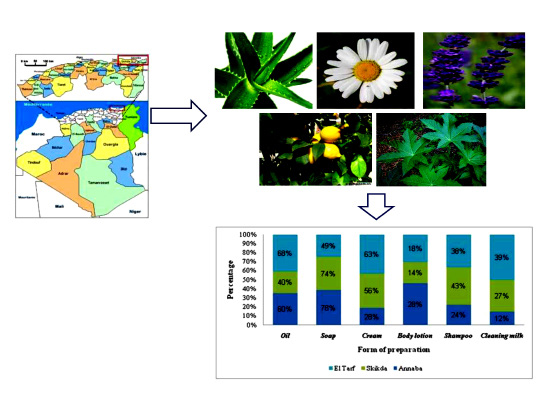 The soap and the fixed oil were the preparation forms most used in phytoscosmetics application. Five medicinal plants have been recorded in this survey. Aloe vera L. was the species most cited by population from the three districts. There is no correlation between local flora and cosmetic use in Algeria.

Natural products have been for ages the first and often the only, source option for most of human necessities: from food to medicinal preparation, passing through materials and even for beauty purposes.1 Over the past decade there has been an increasing interest in the use of natural products. Since 1978, the World Health Organization (WHO) extent of the use of plants in health ecosystem. WHO has estimated that 80% of the world population relies chiefly on traditional medical system.2 Ethnobotanical uses of plants is useful approach for targeting leads in the development of new drugs.3-4 In recent time, there is an increase of interest in the use of traditional cosmetics, because they are considered less toxic, effective with an antioxidant effect.5 Plants have been found to be useful for various skin ailments and cosmetics.6 In spite of the stimulation of the studies involving medicinal plants by WHO, many traditional uses may not be validated as safe and efficacious by scientific methods. In Algeria, most ethnobotanical research has focused on documenting the diversity and traditional uses of medicinal plants.7-29 However, no written pharmacopeia has been made. To our knowledge, in Algeria no ethnobotanical study of medicinal plants used for cosmetics purposes has been published. Therefore, this study was conducted to assess the importance of phytocosmetic uses in three states for north-eastern Algeria.

Data were collected in 2015-2016 using semi-structured interviews. Three level of stratification were considered : the age, the sex and the education level. The characteristic of the population was provided from the data of National office of statistics.30

A total of 300 key informants were interviewed, five parameters have been analyzed: a) demographic characteristics including the age of the interviewed users, the sex, b) the level of education, c) the form of preparation used, d) the frequency of use, and e) the species cited.

Geographical position of the study area. 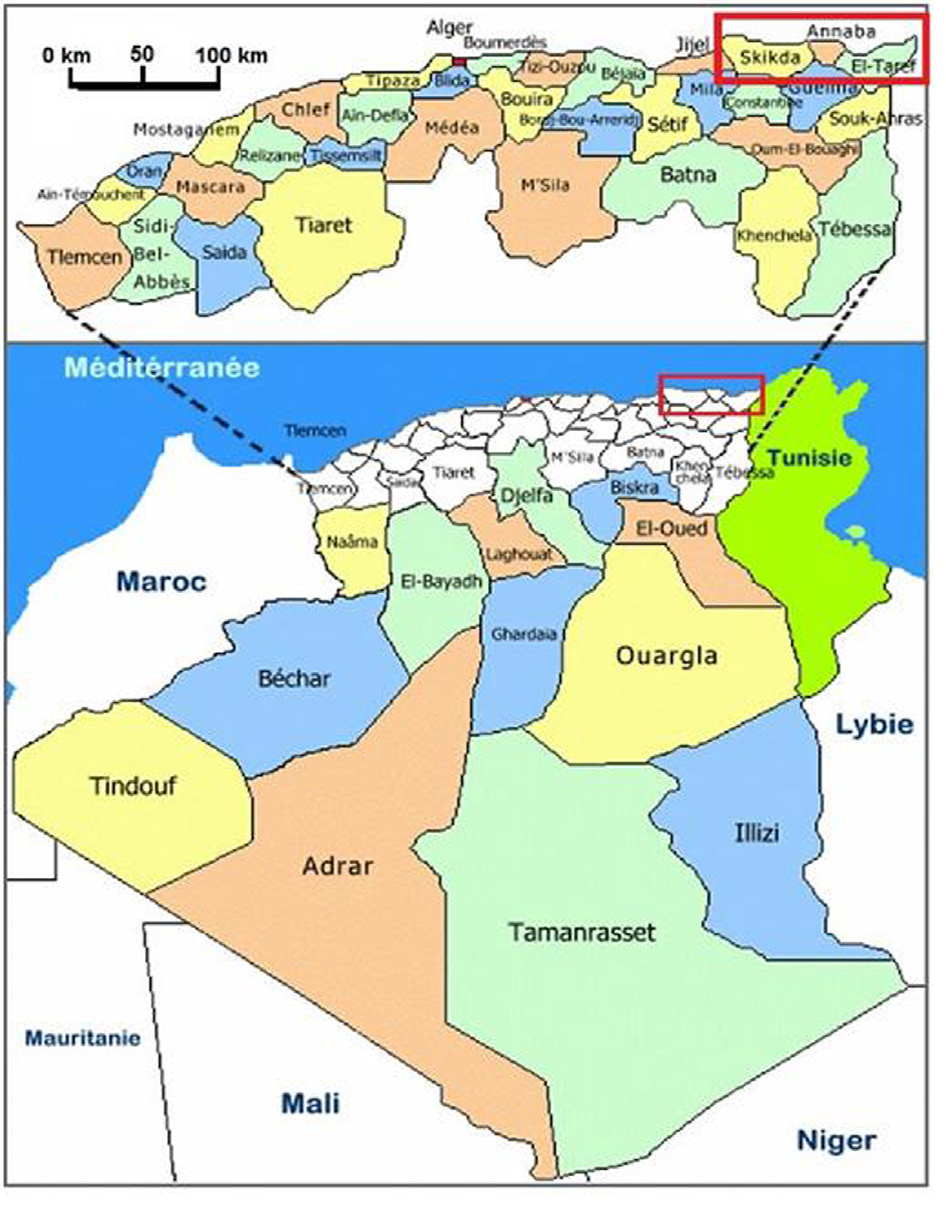 Data collected for the study was analyzed using descriptive statistical methods. We have used a stacked bar chart to 100% to explore the specific distribution in each ditrict. The scientific name of species was recorded from the database online the plant List.31 The Relative Frequency of citation (RFC) was calculated, and showed the local value of every plant species, RFC was measured using this equation:

where FC: number of informants quoting the cosmetic use of the plant species and N: total number of informants participating in the survey.32,33 Although, we have analyzed the correlation between the popularity of each species and the geographical characteristics by Pearson ‘s test, by SPSS 21.0 (Statistical Package for Social Sciences Inc., Chicago IL, USA,).

We interviewed three hundred residents in three districts in the North-Eastern Algeria, each district contained 100 residents. Table 1 describes the age categories, the gender and the education level of the participants interviewed in this study.

Forms used in phytocosmetic applications and frequency of use

Six forms used in phytocosmetic were showed, and divided into three categories: solids (soap), semi-solids (creams) and liquids (lotions, hair oil, shampoos, and cleaning milk). The most representative forms of preparation was the soap with 67% of respondents, following by the hair oil (56%), the cream (49%) and the shampoo (35%), respectively. Although, the distribution of the preparation’s form used in phytocosmetics was investigated in each district. Based on a stacked bar chart to 100% (Figure 2), the soap was majoritary cited and used in Annaba (78%) and Skikda (74%), following by the hair oil in Annaba and the cream in Skikda district with percentage of 60% and 56%, respectively. However, in El Tarf district, the hair oil and the cream were predominant (68%, 63%). In addition, 60% of respondents indicated that the phytocosmetics are employed with the frequency of use once per day, or less frequently twice per day (13%), once a week (15%) and twice a week (12%). 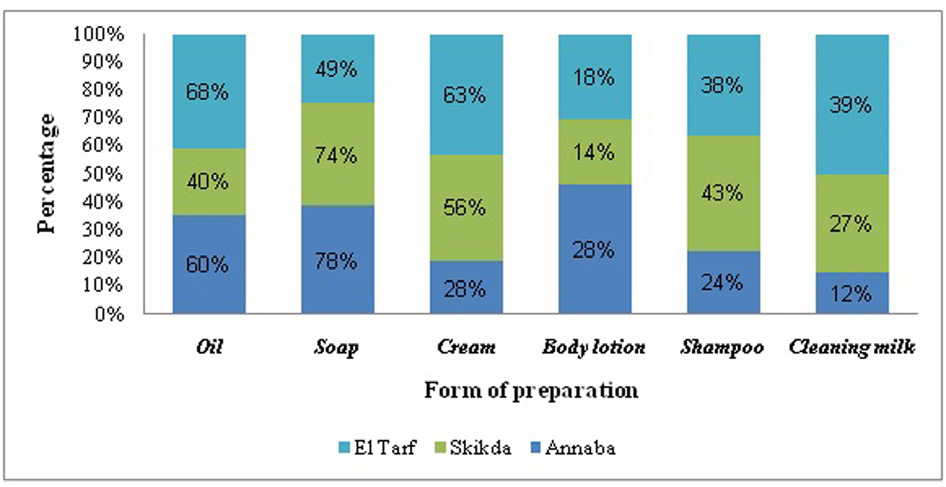 Distribution of RFC species cited in each district. 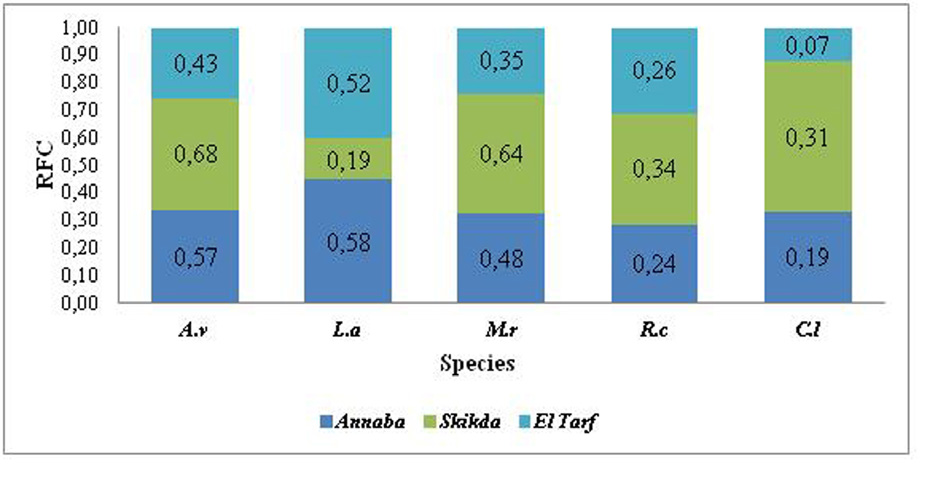 Five medicinal species have been recorded by the participants sampled, for phytocosmetic applications: Aloe vera (L.) Burm.F., Matricaria recutita L. and Lavandula angustifolia Mill. , Ricinus communis L. and Citrus lemon (L.) Osbeck. The figure 3 illustrates the repartition of each species mentionned by informant in each district. Based on stacked bar chart to 100% A. vera, L. angustifolia, and M. recutita were almost used in Annaba and El Taref district, with RFC values of [0.57, 0.58, 0.48], v.s [0.43, 0.52, 0.35]. However, A.vera, M. recutita, R. communis were predominant [RFC=0.68, 0.64, 0.34] in Skikda district.

Our results are in accordance with ethnobotanic survey described in tropical islands of Mauritus as well as in Italy, where the women are most frequent users of herbal cosmetics.34,35 In addition, as described in other study the most popular forms in topical preparations were dermatological cream, ointments and lotions.36

The highest relative citation frequency (RFC) was attributed to A. vera in the three district Skikda (0.68), Annaba (0.57), and El Tarf (0.43). Other ethnobotanical studies have identified A. vera in herbal remedies used in different countries. A. vera is one of the most widely used in herbal products for the treatment of various skin conditions and developed in industry.36 Although, A. vera was described in Nigeria as useful in the treatment of skin diseases facial cleansers and body cream.37,38 As far back as 3500 BCE, the use of A. vera was very ancient in times of an Egyptian.39 In Ayurveda medicine, A. vera is known as the treatment for skin diseases.40 For instance, A. vera leaves are usefull for skin burns.41,42 However, some studies reported the weak allergenic potential of A. vera.43,44 An additional, A. vera has been exhibited excellent pharmacological and cosmetic relevance and has been explored for skin hyperpigmentation problems.45 For instance, actually A. vera was formulated in an aqueous based gel system for topical therapy of wild acne vulagris.46 Furthermore, A. vera prepared gel was tested on the healing of skin wounds surgically induced in Wistar rats, and had showed promising effect on the wound healing process.47 A. vera gel was explored in cream cosmetics for skin against UV-induced aging.48,49 The efficacy of ointment preparation on bedsores was reported.50

Other plants have been also cited in our study, and were published as being herbs with potential cosmetic value. The Comission E approved the external use for skin and mucous membrane inflammations. The chamomile is popular for irritations of skin and mucosa in any part of the body and for eczema.51

Although, the popular use of Lavandula angustifolia (lamiaceae family) as a perfume was reported in Italy.52 The fruit juice of Citrus limon was beneficial for the skin and in the treatment for hair loss.53,54 It was also revealed that the extract juice is applied directly for dry skin and for burns.6-39-45 The seed oil of Ricinus communis was used as ointment for skin diseases.51 Indeed, Ricinoleic acid is used as a source of the oil for the manufacture of soap as a cream base.52

Taking into account previous studies on the traditional knowledge and practices in local cosmetics, it appeared that the use is recorded to botanical flora. Indeed, it was reported that the most species used as traditional cosmetic are lamiaceae in Egypt as well as in Morocco, consequence of its representation in local flora.53,54 In contrast; we could remark that in north-eastern Algeria there is no correlation between the local flora and the traditional use of phytocosmetics. For that purpose, aloe is infrequent in Algeria, mainly cultivated or subspontaneous on the coast, confused with Agave. In addition, aloe is represented in Algeria by Aloe succotrina Lam. known as «Sabr». Maghreb authors indicate the soucoutri (from Socotra) being the best, and term that names the plant and the juice extracted from its leaves. It should be noted that this species is used for the high blood pressure.12

In addition, eleven herbal preparations have been showed (Table 2), the drug was administrated along with honey, milk baking soda, flour, egg yolk. These supplement ingredients have been also reported in other ethnobotanical survey cited by Assamese people. It was also noticeable that the extract role of these materials is not clearly known.6

The importance of the traditional medicine in the preparation of natural phytocosmetics was highlighted in north-eastern Algeria. In this study, we didn’t evaluate the risk of phytocosmetics for users. In spite of these limitations, this is the first study on phytocosmetics in Algeria. A. vera was the species most cited in herbal cosmetics. Therefore, there is no correlation between the traditional use in cosmetics and the local flora. The local knowledge is representing by heritage orally transmitted orally. Further extensive ethnobotanical and ethnopharmacological study may lead to the discovery of plants used for cosmetics.

The author thank to Pr Geoffrey Cordell, for his valuable advices in the redaction of this article.

Author declare that there is no conflict of interests regarding the publication of this paper.

Amel B. Traditional treatment of high blood pressure and diabetes in Souk Ahras District. Journal of Pharmacognosy and Phytotherapy. 2013;5(1):12–20

Mahomoodally MF, Ramjuttun P. A quantitative ethnobotanical survey of phytocosmetics used in the tropical island of Mauritius. Journal of Ethnopharmacology. 2016;193:45–59

A. Bouzabata: Is research professor in the faculty of Medecine, Pharmacy Department, Badji-Mokhtar University, Annaba. Algeria. 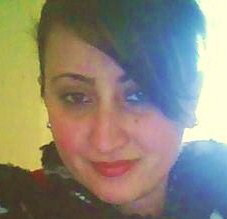