Bioactive Propensity of Macroalgae from the Andaman & Nicobar Islands

Marine macroalgae are the rich source of biologically active metabolites and potential source for development of novel biotechnological products. The present study was made to explore the metabolically active compounds from the macroalgae of the Andaman & Nicobar Islands.

It was observed that different species have different kind of bioactive nature. 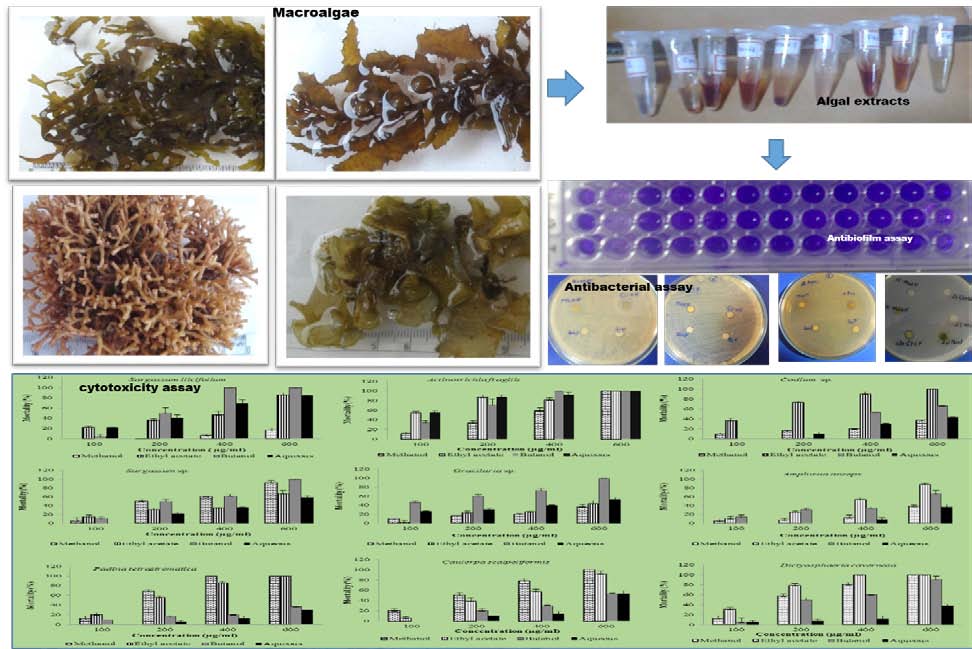 Marine organisms inhabit in a variety of ecosystems where the ecological processes provide support to sustain the life with adaptive interactions. Studies on ecological interactions of marine organisms and their products have taken momentum in recent years with the growing recognition of their importance due to biomedical potential to promote human welfare. Research and utilization of marine algae also increased markedly in recent years. Totally about 8,950 species (6000 Rhodophyceae, 1750 Phaeophyceae and 1200 Chlorophyceae) of marine algal species are hitherto recorded from the seas and oceans. Out of which only 221 species are utilized commercially. These include 145 species for food and 110 species for phycocolloid production. They form one of the major living renewable resources of the ocean.1 Approximately 841 species of marine algae are found in both the intertidal and deepwater regions of Indian Coast.2 Marine algae have been reported to possess a wide array of bioactive properties3-11 and many species have been isolated with antibacterial, antiviral, antifungal, cytotoxic and antioxidant properties. More than 2400 marine natural products have been reported from the subtropical and tropical populations of seaweeds.12-13 Biologically active compounds in algal extract are polysaccharides, proteins, pigments, polyphenols etc.14 Sulfated polysaccharides inhibit activity of many bacterial species as well as viruses.15 Laminarin, a polysaccharides found in brown algae can act as a prebiotic and it has also antiviral and antibacterial properties.16 Many macroalgae were widely studied for their antibacterial activity against pathogenic bacteria6,17-21 and still the investigations are going on. A number of studies have demonstrated the cytotoxic activity of macroalgal secondary metabolites from different geographical region.22-26 The brine shrimp cytotoxic assay is very useful for the isolation of biogenic compounds from plant extracts27 and it is considered as a convenient probe for preliminary assessment of toxicity. Antifouling nature of macroalgae has also been studied widely and reports suggest that most of the marine macroalgae are potential source of antifouling compounds.5,8,28 Hence, the present study was aimed to screen the bioactive potentials including antimicrobial, antibiofilm and cytotoxic activity of macroalgae from the Andaman and Nicobar Islands.

Collection of algae and extract preparation

The marine macroalgae belonging to Chlorophyceae (Caulerpa scalpeliformis, Dictyosphaeria cavernosa and Codium sp.), Phaeophyceae (Sargassum ilicifolium, Sargassum sp. and Padina tetrastromatica) and Rhodophyceae (Amphiro anceps, Actinotrichia fragilis and Gracilaria sp.) were collected from Wandoor (11°35′44.56″N; 92°36′26.63″E), North Bay (11°42′30.80″N; 92°44′44.42″E), Science centre (11°39′15.76″N; 92°45′25.96″E) Carbyn’s cove (11°38′28.65″N; 92°44′48.93″E) and Shastri Nagar (6°48′8.65″N; 93°53′20.69″E) of the Andaman and Nicobar Islands. The collected algae were cleaned with fresh water to remove the epiphytes and other extraneous matters and shade dried. The dried algae were ground to fine powder using a blender and mixed with solvents such as methanol (MeOH), ethyl acetate (EtoAc), butanol (BuOH) and water (H2O) and kept for 48 hours at room temperature. The solvent mixture was filtered with Whatman No.1 filter paper and concentrated in a rotary vacuum evaporator (Buchi, Germany) at 40°C under reduced pressure. The residual extract was lyophilised and preserved at 4°C until further analysis.

The antibacterial assay was performed by the disc diffusion method against 12 human pathogens viz., Staphylococcus aureus (MTCC 3160), Pseudomonas aeruginosa (MTCC 424), Proteus mirabilis (MTCC 1429), Vibrio cholerae (MTCC 3905), Escherichia coli (MTCC 443), Shigella flexneri (MTCC 1457), Micrococcus luteus (MTCC 106), Bacillus subtilis (MTCC 2616), Streptococcus pneumoniae (MTCC 655), Entero coccus faecalis (MTCC 439), Klebsiella pneumoniae (MTCC 3384) and Salmonella typhi (MTCC 3216). Briefly, What man No. 1 filter paper disc (5 mm Ø) was impregnated with 200 μg/disc of each extract and placed on Muller Hinton Agar plates (Hi-media, India) pre inoculated with the above human pathogens. The inoculated plates (triplicate) with extract loaded disc were incubated for 24 hrs at 37° C and the discs soaked with respective solvents used as negative control while kanamycin and streptomycin were as positive control under static condition. The assay was carried out in triplicate. The zone of inhibition which appeared around the disc after the completion of incubation period were measured in millimeter and recorded.

The anti-biofilm assay was carried out as described by the modified methods of O’Toole and Kolter (1998).29 Briefly, 2 μL of aliquots (5 mg/1mL) of extract were coated to each well of a 96-well microtiter plate and 200 μL Vibrio azureus culture (18 hrs old) added to each well. Along with the test extracts respective solvent and marine broth were also added in separate wells as control. The microtiter plates with test samples were incubated at 28±2°C for 24 hrs. After the incubation, the plates were washed with sterile water to remove planktonic Vibrio cells and the wells were stained with 200 μL of 0.1% crystal violet for 20 min. Finally, 200 μL of ethanol was added to the well to release the stain and the extent of biofilm staining was determined by measuring the absorbance of the resulting solution at 590 nm in a multimode micro plate reader (TECAN M200, Austria). All the assay were carried out in triplicate.

The brine shrimp cytotoxic assay was performed using freshly hatched free swimming nauplii of Artemia salina. The assay system was prepared with 2 ml of filtered seawater containing specific concentration of extracts (100 to 600 μg) in a cavity block (embryo cup) with 20 nauplii. The experiment was carried out with test and control (solvent and filtered sea water) for 24 hrs, under constant illumination. The percentage of mortality was recorded after the incubation period and LC50 of the test extract was determined using probit scale method.30

A one –way ANOVA test was performed on the cytotoxic activity results to investigate significant differences among the effect of extracts.

Percentage of antibiofilm activity of active extracts of macroalgae. Data are mean (n = 3) ± SD and percentage of inhibition calculated with the OD values of broth and specific solvent controls. 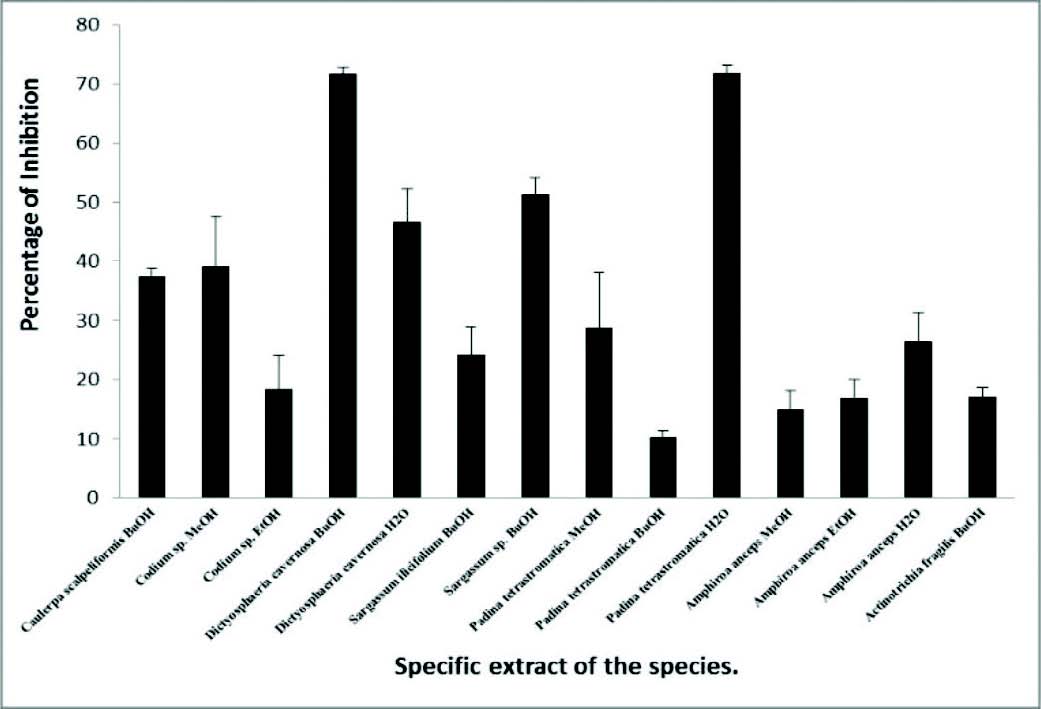 The brine shrimp cytotoxic assay results are represented in figure 2 based on the mortality percentage of Artemia salina at different concentrations of extracts. The 50% lethal concentration (LC50 value) was calculated and all the species were evaluated by one way ANOVA with different extracts and concentrations. The highest toxic effect was exhibited by all its four extracts of Actinotrichia fragilis which was highly significant (P<0.01). Among this, aqueous extract showed the lowest LC50 value of 31.7 μg/ml followed by the EtoAc extract, (89.33 μg/ml) (Figure 3). Three extracts of Dictyosphaeria cavernosa (P<0.05) showed LC50 values with less than 200 μg/ml (EtoAc extract -138 μg/ml, MeOH -190.5 μg/ml and BuOH -199.5 μg/ml). Two extracts of Padina tetrastromatica (MeOH and EtoAc) showed LC50 values of 166 μg/ml and 173.8 μg/ml respectively. Similarly, MeOH extract of Caulerpa scalpeliformis (LC50 values 195 μg/ml), Gracilaria sp. (BuOH) (LC50 - 128.9 μg/ml), Codium sp. (LC50 - 129.4 μg/ml) and aqueous extract of Sargassum sp. (LC50 - 195.9 μg/ml) also exhibited LC50 below 200 μg/ml. Among this, the extracts of Caulerpa scalpeliformis (P<0.01) and Sargassum sp. (P<0.01) were significantly inhibited. All extracts of Sargassum ilicifolium and Amphiroa anceps had LC50values with more than 200 μg/ml. 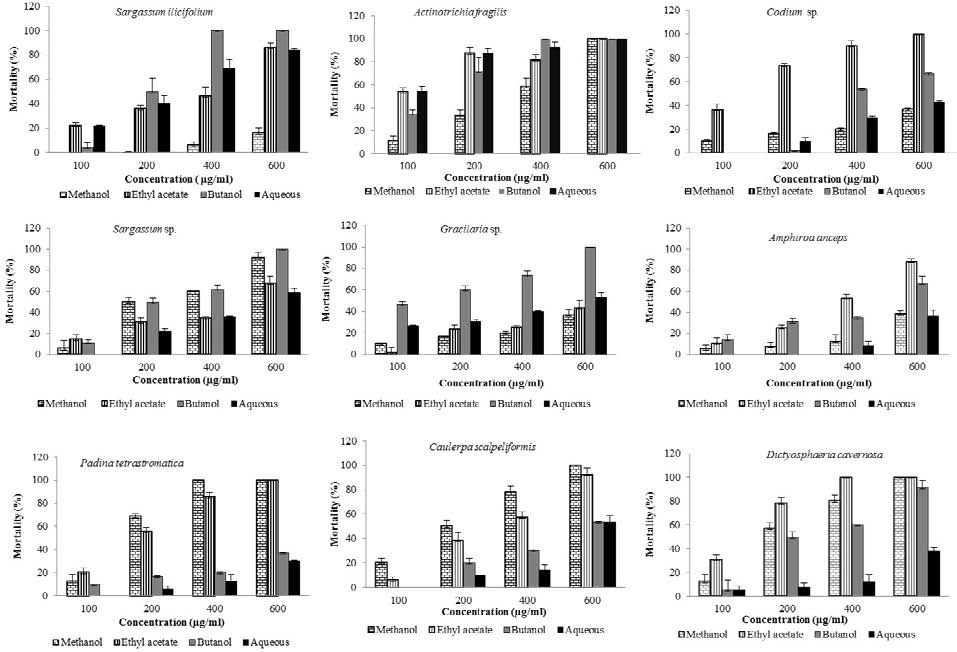 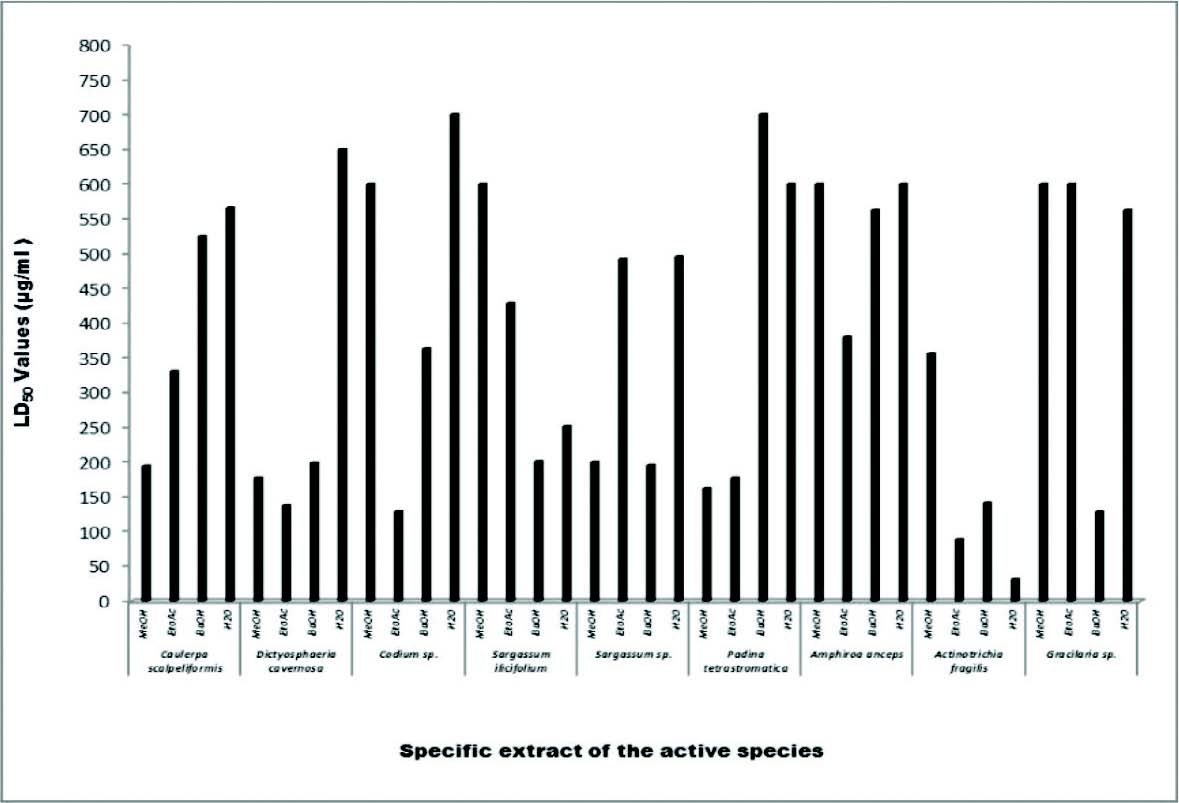 The bioactive compounds produced by marine macroalgae are mostly used for its self-defence and these molecules have tremendous probabilities for usage in pharmaceutical industry. The present study disclosed the presence of potential bioactive compounds in the screened macroalgae and most of the species have at least one of the bioactive effects, such as antimicrobial, antibiofilm and cytotoxic effect.

Biofilm formation (microfouling) is the initial step of biofouling followed by the attachment of macrofoulers such as spores of macroalgae and larvae of invertebrates. Marine natural products or extracts with antifouling activities have been isolated from a wide number of seaweeds.7,39-42 Microfouling by bacteria can be prevented by two methods, one by bactericidal activity of natural or synthetic products or by inhibiting the biofilm formation. The bioassay study in the present work revealed that the tested fouling bacteria (Vibrio azureus) is highly sensitive to aqueous extract of P. tetrastromatica and BuOH extract of D. cavernosa (above 70% inhibition) and BuOH extract of Sargassum sp (above 50%). So it is evident that these algae possess better antibiofilm metabolites. The antibiofilm nature of Ulva reticulata, Sargassum wightii and Halimeda macroloba has also been reported.43 Recently, Yuvaraj and Arul44 reported the antibiofilm activity of ten macroalgal extracts among this Sargassum wightii and Hypnea musiformis were prominent in inhibiting biofilm.

Many of the secondary metabolites of macroalgae are well known for their cytotoxic activity. The brine shrimp cytotoxicity test has been used as a bioassay for a variety of toxic substances45 and it is extrapolated for cell-line toxicity and anti-tumour activity as well. The cytotoxic property of plant material is due to the presence of anti-tumour compounds.46 In the present study, the higher cytotoxic profile of all solvent extracts of Actinotrichia fragilis and other macro algae Dictyosphaeria cavernosa and Padina tetrastromatica indicated the presence of high amount of cytotoxic substances. The previous inventions also reported on high cytotoxic profiles of macroalgae like Stoechospermum marginatum, S. swartzii, S. binderi, Spatoglossum asperum, Stokeyia indica and Caulerpara racemosa,46 Acrosiphonia orientali, P. tetrastromatica and G. corticata25 L. brandenii26 and H. musiformis and U. fasciata.23 The Caulerpa sp. is well known for its cytotoxic effect because of compounds like caulerpin and caulerpenyne in Caulerpa cupressoides,47 Caulerpa racemosa48 and Caulerpa taxifolia.49 Fischel et al.50 showed that caulerpenyne caused early and marked shift into S phase followed by a blockage in the G2/M phase in the cell cycle. The comparatively high inhibitory activity shown by the extracts of Caulerpa peltata in this study might be due to the presence of the cytotoxic compounds caulerpenyne or caulerpin and further evaluation is required to confirm this.

The extraction process of bioactive compounds were varied by researchers and the most used solvents are acetone, benzene, butanol,51-52 ethanol,43,53 methanol26 and water.19 In our study an approach was made to analyse the effectiveness of the four solvents (MeOH, EtoAc, BuOH and H2O). MeOH was found to be effective solvent in dissolving the bioactive compounds than other solvents.

The present study revealed the bioactivity of algae from Andaman & Nicobar Islands and it showed that few species had antimicrobial activity and some algae have antibiofilm as well as cytotoxic effect. Altogether, bioactivity of nine tested macroalgae, Sargassum ilicifolium, Sargassum sp., Padina tetrastromatica and Actinotrichia fragilis have more potent bioactive compounds. Further studies should be undertaken to characterise the active components residing in the algae and to evaluate the effect of each compounds on microbes can be useful for developing ecologically significant bioactive compounds and are effective in biopharmaceuticals.

The authors gratefully acknowledge the financial support provided by the Earth System Sciences Organization (ESSO), Ministry of Earth Sciences (MoES) Government of India, to conduct this research. We thank Director, ESSO-National Institute of Ocean Technology (NIOT), MoES, Chennai, India, for his constant encouragement and support to do this work. We are thankful Dr. M. Vijaykumaran, Consultant, ESSO- NIOT, Chennai, for the critical review. We also thank the scientific and supporting staffs of ANCOST, ESSO- NIOT Port Blair, India, for their timely help during this research work.

Leonard SG, Sweeney T, Pierce KM, Bahar B, Lynch BP, O’Doherty JV , authers. The effects of supplementing the diet of the sow with seaweed extracts and fish oil on aspects of gastrointestinal health and performance of the weaned piglet. Livestock Science. 2010;134(1):135–8

Sivadasan Deepa is working as Project Scientific Assistant at Andaman Nicobar Centre for Ocean Science and Technology (ANCOST); ESSO-NIOT. She obtained her Ph.D. from the University of Kerala. 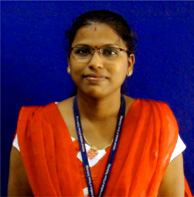 Pitchiah Venkateshwaran serves as Project Scientific Assistant at Andaman Nicobar Centre for Ocean Science and Technology (ANCOST); ESSO-NIOT. He received his master of science in Microbiology from the Manonmanium Sundaranar University. 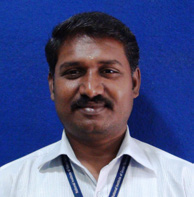 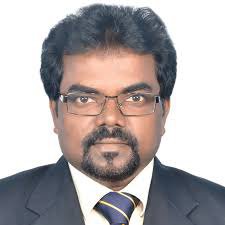 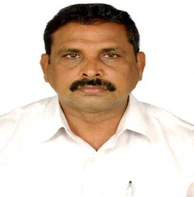