Cyperus species are well known traditional plants and used for several diseases around the world.

Aim of the Study

Our study aimed to identification of the phenolic constituents in addition to evaluation of different extracts of Cyperus laevigatus L as antioxidant, anti-inflammatory and antidiabetic agents.

A new flavone, chrysoeriol 7-O-β-(6‴-O-acetyl-β-D-glucopyranosyl)-(1→4) glucopyranoside (1), along with seven knowns (2-8) were isolated from Cyperus laevigatus L. The structures of isolated compounds were established depending upon 1D, 2D-NMR and HR-ESI-MS. The MeOH and EtOAc fractions exhibited significant antioxidant activity while the isolated flavonoids exhibited from moderate to weak antioxidant activity. The total extract, MeOH and EtOAc fractions exhibited significant anti-inflammatory activity using LPS-stimulated RAW 264.7 macrophages model by decreasing of NO accumulation by 76 – 66% and 84 – 67%, of the original accumulation values with increasing concentrations in comparison with the reference drug, dexamethasone. The total extract exhibited antidiabetic activity in streptozotocin-induced diabetic rats and this effect was manifested by decreasing serum levels of glucose, glucagon and NO. It also increased level of insulin and promoted paraoxonase activity.

These results proved that this plant may be multiple sources for medicinal natural drugs especially for anti-inflammatory and antidiabetic. 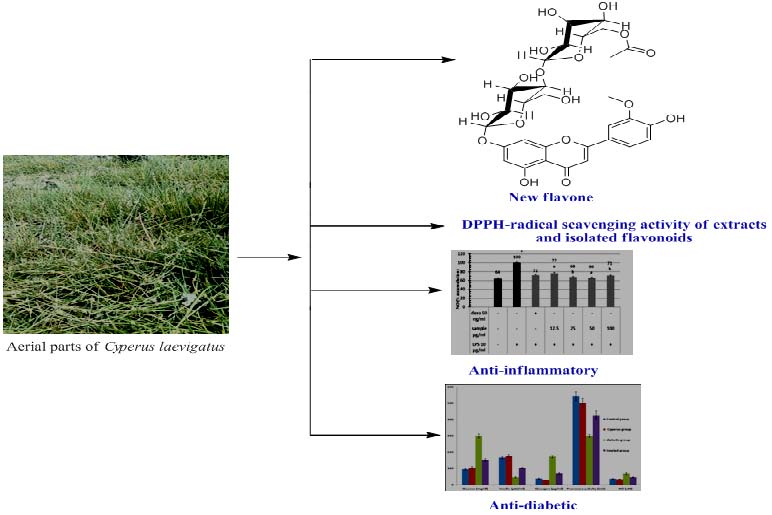 Cyperaceae is a largest family in the monocotyledons that includes more than 100 genera. Cyperus genus is the largest genus in this family that contains more than 600 species.1 Cyperus species are widely used as weeds in traditional medicines.2 In 1983, Buolus reported that Cyperus species were traditionally used as an emollient to treat analgesic, diuretic, carminative and others.3 Pharmacological studies on Cyperus sp. indicated a myriad of biological effects such as anti-inflammatory, hepatoprotective, gastroprotective, anti-malarial and anti-diabetic activities.4-7 Several secondary metabolites were reported from Cyperus sp. Including quinones, flavonoids, sesquiterpenes, steroids and essential oils.2-8-10 Herein we report the phenolic constituents of the aerial parts of Cyperus laevigatus (Family: Cyperaceae) as well as the pharmacological effects of the different extracts and isolated compounds.

[i] *All assignments are based on 1D and 2D measurements (HMBC, HSQC, COSY).

The antioxidant activity of the different extracts of C. laevigatus aerial parts along with the isolated flavonoids 1-8 were evaluated in terms of DPPH radical-scavenging ability, as described before12 in a comparising with a reference drug, ascorbic acid.

The anti-inflammatory of total extract, MeOH and EtOAc fractions was evaluated at different concentrations (12.5, 25, 50 and 100 μg/ml) using LPS-stimulated RAW264.7 macrophages model with a reference drug, dexamethasone as described previously.13

The mitochondrial-dependent reduction of MTT to formazan was used to measure cell respiration as an indicator of cell viability.13 Cells (0.5 × 105 cells/ well) in serum-free media were plated in a flat bottom 96-well microplate, and treated with 20 μL of different concentrations of the tested samples for 24 h at 37 °C, in a humidified 5% CO2 atmosphere. After incubation, the media were removed and 40 μL MTT solution / well was added and incubated for an additional 4 h. MTT crystals were solubilized by adding 180 μL of acidified isopropanol/well and the plate was shacked at room temperature, followed by photometric determination of the absorbance at 570 nm using 96 wells microplate ELISA reader.

Inhibition of nitric oxide (NO) production

Raw murine macrophages (RAW 264.7) were seeded in 96-well plates at 0.5 × 105 cells / well for 2 h in RPMI without phenol red. The cells were stimulated with LPS with final concentrations of 10 μg/mL. The stimulated cells after 2 extra h were treated with serial concentrations of the tested samples, dexamethasone (50 μg/mL) or left with the LPS alone. Untreated cells were used as a negative control.13

Nitrite accumulation was used as an indicator of NO production using a microplate assay based on the Griess reaction. In each well of flat bottom 96 well-microplates, 40 μL of freshly prepared Griess reagent was mixed with 40 μL cell supernatant or different concentrations of sodium nitrite ranging from 0-100 μmol/L. The plate was incubated for 10 min in the dark and the absorbance of the mixture at 540 nm was determined using the microplate ELISA reader. The amount of nitrite in the media was calculated from NO standard curve.

Serum glucose was performed according to the method of Passing, 1983.15 Serum glucagon and insulin were performed according to previous reported methods.15,16 NO was determined according to the reported method17 where nitrite, stable end product of nitric oxide radical, is mostly used as indicator for the production of NO. The activity of paraoxonase was measured spectrophotometrically in supernatants using phenyl acetate as the substrate. In this assay, aryl esterase/paraoxonase catalyzes the cleavage of phenyl acetate, resulting in phenol formation. The rate of phenol formation is measured by monitoring the increase in absorbance at 270 nm at 25 °C. Absorbance at 270 nm was taken every 15 s for 120 s using UV Spectrophotometer.18

The pancreatic tissues were dissected out immediately, fixed in 10% normal formalin dehydrated in series of alcohol and then to xylene each for 1 h followed by embedding in wax at 60°C. Paraffin blocks of the tissues were sectioned to 5 μm thickness. The sections were then stained with hematoxylin and eosin for histopathological evaluation.19

All data were expressed as mean ± standard error. Data were analyzed using one-way ANOVA using SPSS (Version 16). Duncan’s new multiple-range test was used to assess differences between means. A significant difference was considered at the level of P < 0.05. 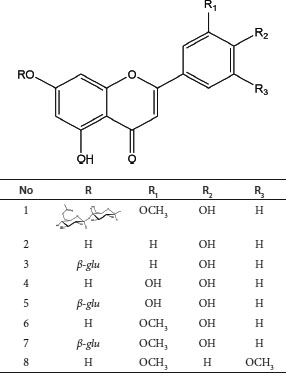 The total extract and MeOH fractions showed moderate DPPH radical scavenging activity with IC50 23.39±0.72 and 24.28±0.56, respectively but EtOAc, and n-hexane showed weak activity with IC50 57.89±0.71, and 76.98±0.73, respectively. Also the isolated flavonoids exhibited from moderate to weak antioxidant activity by the order of compound 4>2>5>6>3>7>8>1 (Table 2). The moderate antioxidant activity of both the total extract and MeOH fraction was attributed to the high flavonoid content. It was reported that flavonoids possess antioxidant activity especially luteolin derivatives and methoxylated flavonoids.24 The DPPH reaction mechanism with the compounds that exhibited activity depending upon the free OH groups in B-ring, so the flavons exhibited more activity that the flavons 7-O-glycosides.25

Cytotoxicity results confirmed that the tested extracts are safe on RAW264.7 macrophages with different concentrations (12.5, 25, 50 and 100 μg/ml). The total extract (12.5, 25, 50, and 100 μg/ml) and MeOH fraction (12.5, 25, and 50 μg/ml) decreased NO% accumulation as the concentration increased reaching 76 - 66% and 84 - 67%, respectively. Also, the EtOAc fraction (12.5, 25, and 50 mg) decreased the NO% accumulation with concentration increased with values ranging from 77 - 66%. The results of the anti-inflammatory assay suggested that the total, MeOH and EtOAc extracts exhibited potent activity at different concentrations and the results were comparable with the reference drug, dexamethasone (Figure 2). A strong correlation has been always noticed between chemical constituents and herbal biological activities. By the same analogy, the anti-inflammatory activity of C. laevigatus can be correlated to its chemical constituents. The phytochemical study of this plant elucidated that it is rich with bioactive compounds. Luteolin, its methoxylated and glycosides derivatives inhibited the NO production and iNOS expression in LPS-stimulated BV-2 microglial cells.26 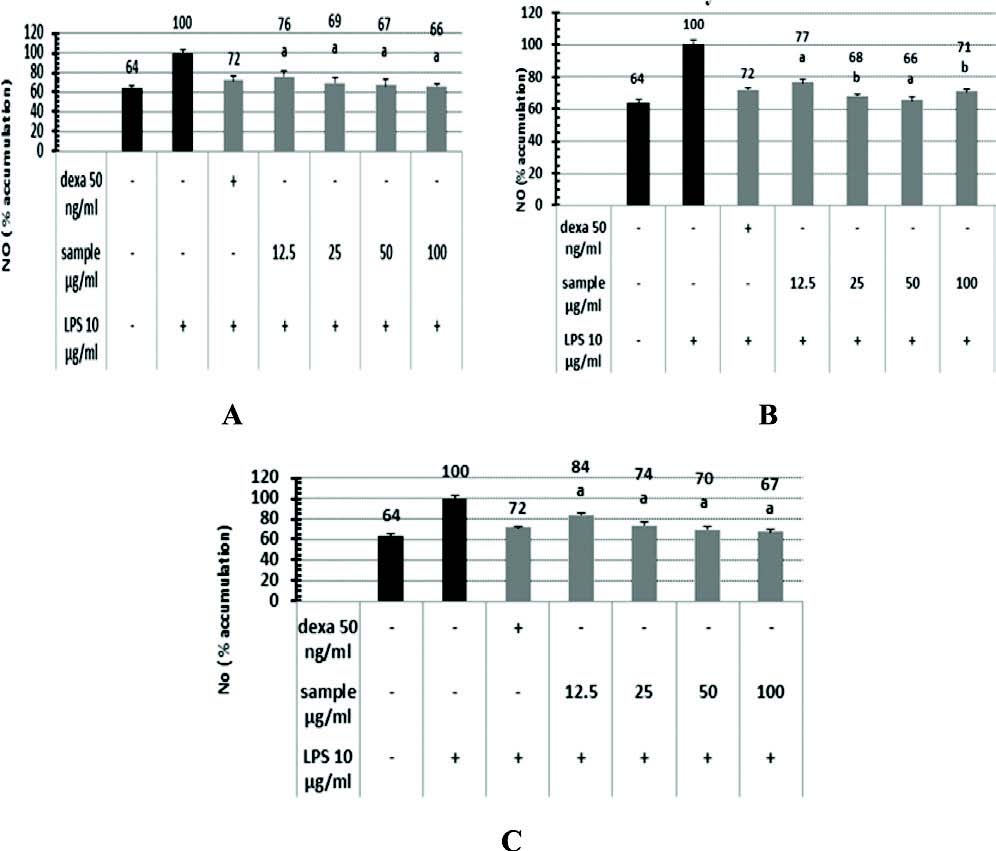 Cyperus laevigatus aerial parts total extract did not exhibit any obvious toxic symptoms or mortality in rats up to 5000 mg/kg b.w. after 14 days. Biochemical markers in the present work exhibited that the diabetic group treated with C. laevigatus extract showed a decrease in the glucose, glucagon, and NO serum levels and promote serum insulin and paraoxonase levels. Zhang et al. 201027 reported that flavonoids exhibited antidiabetic activity by decreasing fasting blood glucose (FBG) and glucagon serum levels while increasing insulin serum levels (Figure 3). Histological examination of the pancreas of the control and extract treated rats indicated normal architecture (Figure 4-A; B). The islets of Langerhans found in the pancreatic tissue were round in shape with normal cell lining. On the other hand, the acini were arranged in a well-organized manner. The interlobular ducts were surrounded with the supporting tissue. These results were consistent with Jarral et al. 201328 that found that beta-cells comprise the major of islets’ cells of rat’s pancreas. 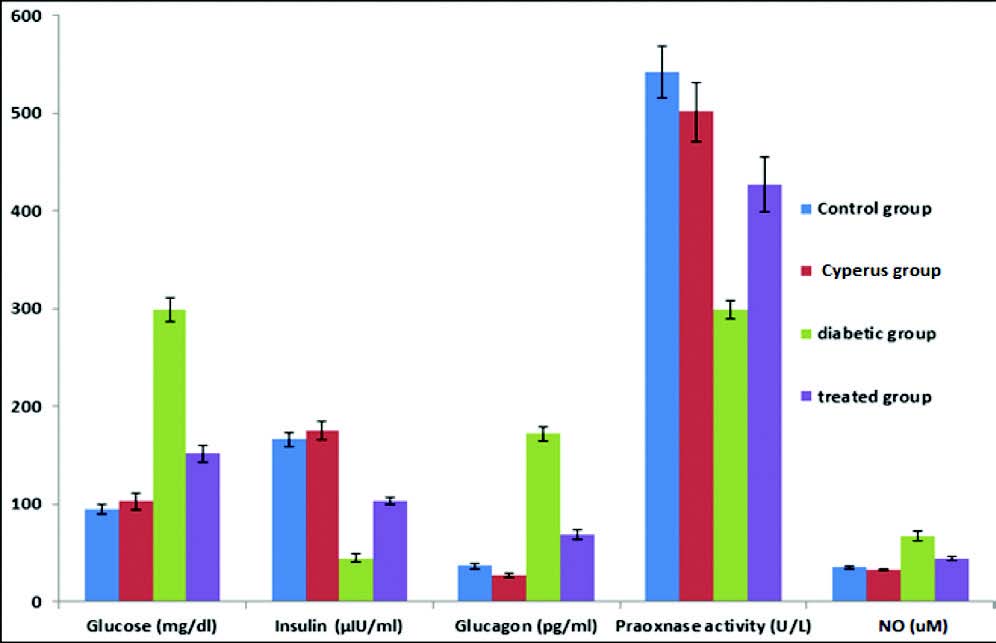 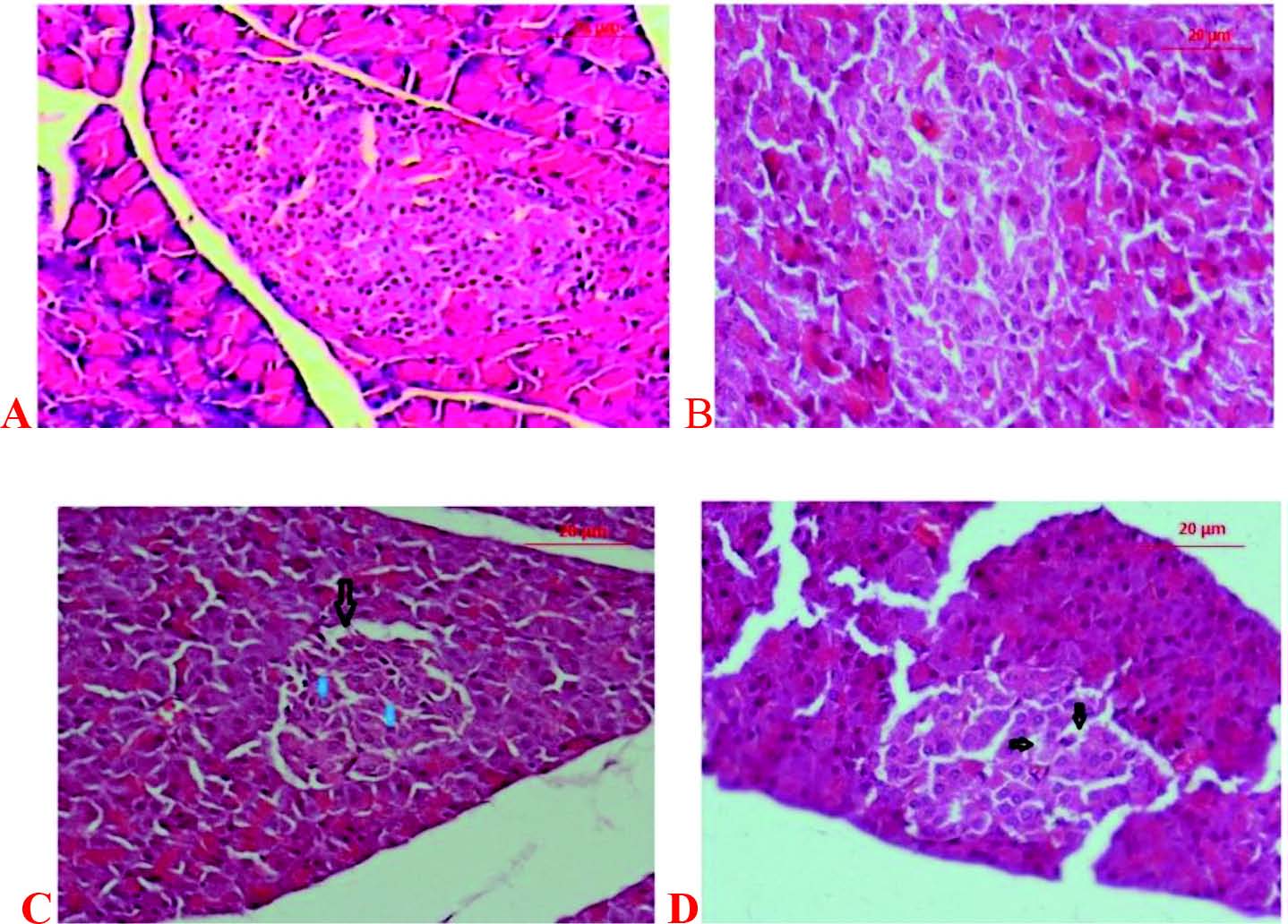 In the diabetic rats, the pancreas showed a decrease in the pancreatic islet size, atrophy, vacuolation, and connective tissue invasion in the parenchyma of the pancreas islets. The sections revealed a reduced pancreatic β-cell numbers compared to the control group (Figure 4-C). STZ-induced diabetes may be due to the selective destroying of pancreatic β-cells, which is responsible for the insulin production from endocrine cells.29 The pancreas of the diabetic rats treated with C. laevigatus extract showed dramatic suppression of all abnormal histological changes as compared to the diabetic group (Figure 4-D).

The pancreas of the diabetic rats treated with C. laevigatus extract showed dramatic suppression of all abnormal histological changes. Regarding the mechanism by which C. laevigatus can improve β-cells, researchers found that flavonoids, flavonoid glycosides and phenolic acids exhibited a strong contribution as antioxidant agents that can regenerate the changes in the morphology of β-cells.24-30-31

A new flavonoid, chrysoeriol 7-O-β-(6‴-O-acetyl-β-D-glucopyranosyl)-(1→4) glucopyranoside (1), and seven knowns (2-8) were isolated and identified from aerial parts of C. laevigatus alcoholic extract. The different extracts and isolated compounds exhibited from moderate to low antioxidant activity. The total acoholic extract, MeOH and EtOAC fractions exhibited significant anti-inflammatory activity using by decreasing of NO accumulation in comparison with dexamethasone as a reference drug using LPS-stimulated RAW 264.7 macrophages model. The MeOH fraction exhibited antidiabetic activity by decreasing levels of glucose, glucagon and NO along with increasing level of insulin and promoted paraoxonase activity in streptozotocin-induced diabetic rats.

This work was supported by the research project of the National Research Centre (Project ID: 10010303) and the Faculty of Pharmaceutical Science; Tokushima Bunri University.

[2] Conflicts of interest CONFLICT OF INTEREST The authors declare no conflict of interests.

Yomna M. Yassine is a doctoral researcher at National Research Centre, Egypt. She finished her Msc in 2016 from Faculty of Pharmacy; Ain Shams University; Egypt. Her research topic is isolation and identification of bioactive constituents from natural resources