Yupparach and Konsue: Hypoglycemic and Hypolipidemic Activities of Ethanolic Extract from Mimosa pudica L. in Normal and Streptozotocin-Induced Diabetic Rats

Mimosa pudica L. its unique property to collapse when touched and opens up.

The results from this study confirmed the traditional use of Mimosa pudica L. for the treatment of diabetes mellitus. 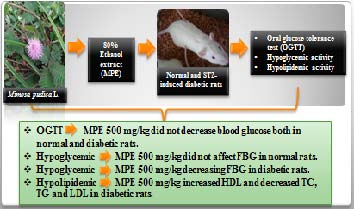 Diabetes mellitus (DM) is a group of a metabolic disease of all age groups especially the middle age and aged people. Diabetes can cause serious complications that involve multiple organs and physiological functions. The chronic hyperglycemia of diabetes is associated with long-term damage, dysfunction and failure of various organs and systems.1 DM is a chronic illness that requires continuous medical care and patient self-management education to prevent acute complications and to reduce the risk of long term complications.2 Type 2 diabetes, often associated with obesity, high blood glucose, blood lipid abnormalities, mainly increase levels of TC, TG, LDL-C, serum insulin and decrease levels of HDL-C, which lead to a series of complications.3 Many oral agents for the treatment of DM such as insulin, sulphonylureas, biguanides and thiazolidinediones are expensive and can cause adverse effects.4

Recently the traditional medicines from Thai medicinal plants including Mimosa pudica L. were used for the treatment of DM.5 Mimosa pudica L. is a medicinal plant belonging to family Fabaceae. It is particularities property to collapse when touched and opens up a few minutes later. Some pharmacological activities of this plant such as wound healing,6,7 analgesic, anti-inflammatory,8 anti-oxidant,9,10,11 hepatoprotective,11,12 hypolipidemic,13,14 anti-hyperglycemic,9,14,15,16 and hyperglycema.17 have been reported. Although this plant was widely used for treatment of diabetes, its hypoglycemic activity has not yet been reported. The present study was therefore, conducted to determine the hypoglycemic activity of 80% ethanolic extract from whole plant of Mimosa pudica L. in normal and STZ-induced diabetic rats.

The fresh whole plants were collected from the moist waste ground along the road side in Kalasin Province, Northeastern Thailand. The specimen was identified by the Plant Varieties Protection Division, Department of Agriculture, Ministry of Agriculture and Cooperatives, Thailand. The voucher specimen is deposited at the Faculty of Medicine, Mahasarakham University, Thailand (code: MSU.Med-MP0001/AK). The plants were dried at 50°C for 48h in a hot air oven and then powdered.

MPE were prepared by macerating the plant powder in 80% ethanol for 7 days (1:5 w/v). The residue powder was excluded by using the filter papers. The filtrate was evaporated using rotary evaporator (Heidolph Laborota 4000, Germany) and freeze-dried. The obtained dark brown extract with a percent yield of 5.74% dry powder was kept at 4°C until be used.

The using animals in this study were male albino Wistar rats weighing 150-200 g purchasing from the National Laboratory Animal Centre, Mahidol University, Thailand. They were acclimatized in an air-conditioned room at 25±2 °C, 12-h light/12-h dark cycle with a relative humidity of 50-55%. They were given with some standard chow and watered ad libitum for 7 days prior to the commencing experiment. The rats were maintained in accordance with the guidelines of the Committee Care and Use of Laboratory Animal Resource, National Research Council Thailand, and performed in accordance with the advice of the Institutional Animal Care and Use Committee, Mahasarakham University of Thailand (License, No. 0003/2017).

The rats were injected intraperitoneally with a single dose of 65 mg/kg body weight (bw) streptozotocin (STZ, Sigma Chemicals, St. Louis, MO) dissolved freshly in cold 20 mM citrate buffer pH 4.5. After injection, they were provided with 2% sucrose solution for 48h to alleviate the discomfort after initiating the hypoglycemic phase. Three days after injection, the rats were examined for FBG to confirm their diabetic stage. The rats with FBG higher than 126 mg/dL were used in the experiments.18

After 8 weeks of treatment, the rats were fasted overnight. They were sacrificed by cervical dislocation technique, then blood samples were drawn from the rat’s heart. The blood samples were centrifuged at 3500 rpm for 20 min to separate blood serum. The biochemical data include total cholesterol (TC), triglycerides (TG), high-density lipoprotein (HDL) and low-density lipoprotein (LDL) which were measured by an automatic blood chemical analyzer (BT 2000 plus, Germany).

All data were expressed as mean±standard error of mean (SEM). Statistical analysis was carried out using F-test (One-Way ANOVA) followed by Scheffe’s test. The criterion for statistical significance was at a p-value less than 0.05.

Oral Glucose Tolerance Test, the blood samples were analyzed for glucose content at -30, 0, 30, 60 and 120 min, respectively. The blood glucose levels of MPE (500 mg/kg bw) treated groups were showed that the doses of MPE could not decrease in normal and STZ-induced diabetic rats comparable to control and Glybenclamide treated at a -30, 0, 30 and 120 min. Table 1.

Table 2 showed the FBG in normal and STZ-induced diabetic rats. FBG in normal control, normal rats with glibenclamide and MPE were not effect. FBG with glibenclamide and MPE were significantly (p<0.05) decreasing in diabetic rats. MPE at the dose of 500 mg/kg bw showed significantly (p<0.05) decreasing slightly better than control group at the 8 weeks of the experiment.

The effect of MPE on 8 weeks fasting blood glucose levels in normal and STZ-induced diabetic rats.

Lipid Profiles of MPE in normal and STZ-induced diabetic rats.

A test widely used for glucose tolerance classification is the oral glucose tolerance test (OGTT). The OGTT is a widely used to evaluate apparent insulin release and insulin resistance in various clinical settings.19 For OGTT the blood samples were analyzed for glucose content at -30, 0, 30, 60 and 120 min, respectively. In this oral glucose tolerance test study, the whole M. pudica plant, the single dosed study of MPE doses at 500 mg/kg bw produced could not decrease in normal and STZ-induced diabetic rats. It’s was compared with glibenclamide has been used for many years to treat diabetes and stimulates insulin secretion.

The present study, STZ 65 mg/kg bw was selected in order to partially destroy the β-cell of pancreas and consequently the rats became permanently diabetes.20 The result showed that MPE had a significant hypoglycemic effect by decreasing FPG after 8 weeks of treatment. MPE at the dose of 500 mg/kg bw showed more potent effect than control group in diabetic rats.7,17 MPE did not show a hypoglycemic effect in normal rats. We assume that hypoglycemia might not be induced by giving M. pudica to non-diabetes patients. Because MPE decreases FPG in diabetic rats, we assumed that it stimulates the insulin secretion. This effect is probably due to the regeneration of pancreatic β-cells which are destroyed by streptotozin.21 However, this proposed mechanism has to be clarified in a further study. The plant composition such as steroids, tannins, flavonoids and phenolic compounds have been reported.11 Constituents of MPE such as kaempferol and stigmasterol and flavonoids with their antioxidant activity may be responsible for this effect.22,23 Flavonoids such as kaempferol are known to improve insulin-stimulated glucose uptake in mature 3T3L1 adipocytes and to protected the body against free radicals, it is biologically plausible relation between flavonoids and low risk of diabetes.24,25

Diabetes is associated with alterations in the plasma lipid and lipoprotein profile, with an increased risk of coronary heart disease.26 Our data show that the level of HDL was increased, but levels of TC, TG, LDL in the diabetic rats were decreased. These results indicate that MPE possesses hypolipidemic effect in diabetic rats and thus may lead to a decrease in the risk of cardiovascular disease and related complications. The improvement of lipid profile might be directly or indirectly related to the reducing of FBG levels in diabetic rats27

The results from this study in particula whole plant of Mimosa pudica extract support the traditional use of the plant for diabetic treatment and health promoting agent for prevention of diabetes. The ethanolic extract at the dose of 500 mg/kg bw shows a beneficial hypoglycemic effect in diabetic rats. Further study, isolation and investigation of the chemical constituent of the extract from M. pudica responsible for the hypoglycemic effect should be undertaken in order to confirm and clarify the mechanism behind this activity.

The research was partially supported by the Development Research Division, Mahasarakham University. We thank Assoc. Prof. Dr. Chusri Talubmook for valuable discussion and a critical review of the manuscript.

[4] Conflicts of interest CONFLICT OF INTEREST The authors are declared no conflict of interest.

Ampa Konsue: Is a lecturer at the Faculty of Medicine, Mahasarakham University, Thailand, where she graduated in Bachelor of Sciences (Applied Thai Traditional Medicine) and Master of sciences (Pharmaceutical chemistry and natural products). Her doctoral research focused on theevaluation of hypoglycemic effect and mechanisms of actionand antioxidant activity of natural products.