Cadmium (Cd), is a toxic metal which affects various organs including testis. It produces oxidative stress leading to male infertility. Moringa tree, is a natural plant with a great therapeutic value and hence it is found to be effective both in prevention and treatment of various conditions including reducing toxicity of hazardous materials. The aim of the present study was to examine the effects of Pre-and Post-treatment with Moringa oliefera leaf extract (MoE) on testis in cadmium exposed rats.

The present study was conducted at the Department of Physiology, Kasturba Medical College (KMC), Mangalore, Manipal University (MU), Karnataka, India, between (2011-2013). This prospective study consisted a total of 30 rats. These were divided into 5 groups with group I being the control. Data were presented as mean ±SD. student’s t test was used as statistical tool, p<0.05 considered statistically significant. Group IV and V were pre-and post-MoE treated groups respectively. Serum testosterone and tissue lipid peroxidation levels were estimated.

Treatment with MoE prior and after administration of cadmium, respectively showed an increase significantly in the testosterone levels and a decrease in the tissue lipid peroxidation as compared to the group treated with cadmium. However, the pre-treatment showed better results in combatting the toxic effects of cadmium. 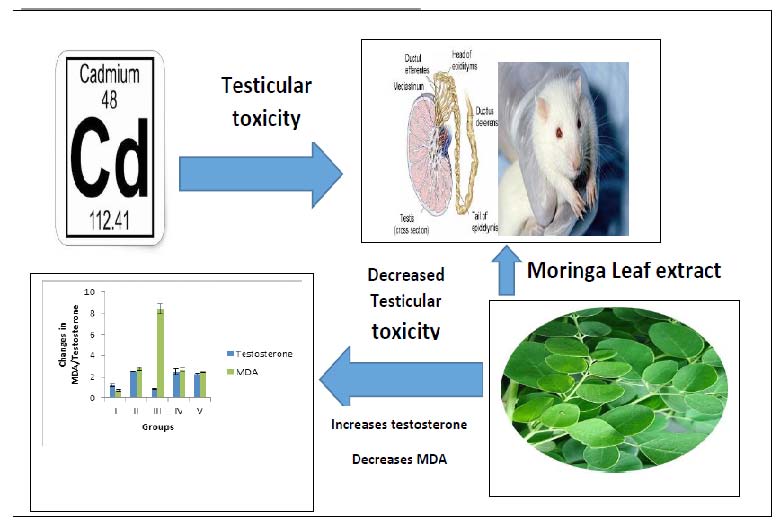 Cadmium has been found to produce various dysfunctions in our body, physiologically and biochemically. It can also lead to injury to the tissues.1 Previous studies have shown that one of several mechanisms through which cadmium exerts its toxicity is by altering the antioxidant defence systems and increasing the production of cellular reactive oxygen species, like singlet oxygen, hydrogen peroxide and hydroxyl radicals.2 This is usually followed by the development of oxidative stress in the target organs.3,4 Cadmium toxicity affects many organs adversely like, kidney, liver, lung, pancreas, prostate, ovaries, placenta etc. including testis.5,6 Moringa oleifera of Moringaceae family is one of the plant species that provide medicinal herbs which has been scientifically evaluated for its possible medicinal applications.7

Cadmium toxicity leads to alterations in the antioxidant defense system by fetching changes in the lipid peroxidation levels.8 Moringa oleifera is considered as a highly nutritious herb which has a lot of medicinal values and source of vitamins , minerals and other phytochemicals with antioxidant property.7 Hence, extracts of this plant is indicated as an anti-cancer, anti-inflammatory and hepato-protective agent.9,10 Its anti-diabetic actions also has been demonstrated. Till recent times, there are ongoing scientific researches being carried on some of the reported medicinal properties of this plant.

Male infertility is one of the important problems nowadays and affects almost about 10% of couples in the society. Recently there are few studies reported on Moringa oleifera in improving the fertility rate. A study done by the Bureau of Plant Industry (BPI) revealed that the sperm count in men can be boosted by a steady diet of Moringa fruit.12,13 But till date there are no studies reported the comparative results Moringa olifera prior and after the treatment on serum testosterone and tissue lipid peroxidation levels in cadmium exposed rats. So, the present study was designed to elucidate the effect of extract of Moringa oliefera leaf on damage of testicles after the exposure of cadmium in wistar rats.

The chemicals required for the biochemical assay were obtained from Durga Laboratories, India. Experiments were carried out after approval from the Institutional Animal Ethics Committee (IAEC).

The leaves were collected and validated by a taxonomist. After drying the leaves at 37°C, powdered form of extract was prepared. 20 gm of powder was soaked in 100 ml of water and chloroform in a shaker for three days. It was further concentrated Filtrate of this was concentrated to 10 % of its original. We concentrated the filtrate in rotary evaporator and dried in water bath.14

We procured male Wistar Albino rats (4 months old) from the institutional animal house. They were provided food and water adlibitum. Rats were maintained and procedures were conducted according to the institutional ethical committee guidelines.

The present study was conducted at the Department of Physiology, Kasturba Medical College (KMC), Mangalore, Manipal University (MU), Karnataka, India. A total of 30 male Wistar rats were divided into five (5) groups as summarized in the Table below.4

Tesosterone was estimated in 2ml of blood which was collected from rats by cardiac puncture. Chemiluminescence Immuno Assay (CLIA) kit (Chen et al,1991) was used for the estimation of serum testosterone levels.15

Tissue lipid peroxidation (MDA) was analysed by using testis tissue hemosylate. Malondialdehyde was estimated by the standard procedure described by Kartha and Krishnamurthy.16

Changes in the MDA & testosterone level with prior & post-treatment with MoE in Cadmium exposed rats. Values are expressed in mean ± SD. 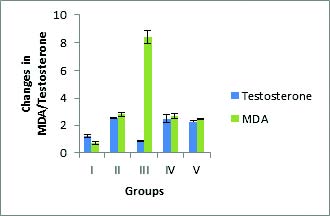 Effect of heavy metal exposure on testes (biology of reproduction) has become one of the major concern for the society as it is directly related to infertility.17,18,19 Recently, anti-diabetic actions of Moringa olifera have also been reported.20 Cadmium is a toxic metal, implicated in oxidative stress 10,11 and embryonic tissue.21,22 Oxidative stress arises from a variance between the production of oxidants and physiological antioxidant capability.23 Lipid peroxidation is a measure of oxidative stress. Hence in the present experiment we measured tissue lipid peroxidation and serum testosterone levels.23 Our results showed significant increase in the testicular MDA of the cadmium alone treated group (oral 10mg/kg/bw, single dose). Testosterone levels were found to be decreased significantly in these rats. These findings indicate testicular toxicity. Our previous study reports on Pre- treatment of Moringa olifera in rats also showed the similar results on cadmium induced rats.24 Imbalance of steroidogenic activity observed in this study are in accordance with the previous reports.25,26 Increased MDA level suggests that CdCl3 triggered testicular oxidative damage by enhancing the production of reactive oxygen species.27 Treatment with M. oleifera (pre and post 100 mg/kg oral for 10 days ) showed decreased toxic effect caused due to exposure of cadmium ,which is evidenced by an increase in the serum testosterone level coupled with decrease in the tissue MDA levels. However, the pretreated group showed a better effect in reducing the toxicity than the treated group after exposure to cadmium M. oleifera leaf extract (proved of having bio flavonoid and other effective antioxidants) administration prior to cadmium exposure and post to cadmium exposure caused in significant improvement of toxicity in the testis.9,10 Studies have also reported that pre-treatment with M. oleifera leaf extract (containing fundamental antioxidant and phenolic compounds) protects the testes against various lethal substances and the oxidative damage caused by them26 Our study suggest that Moringa oleifera extract could diminish cadmium induced toxicity which owe to their antioxidant property. This may explain the fact that, the experimental group treated cadmium and M. oliefera leaf extract (MoE) showed an increase in testosterone concentration and subsequent reduction in testicular MDA. Studies have shown antioxidant activities of M. oleifera leaves.28 Active components of this plant scavenge free radicals. It offers protection against oxidative damage on cellular macro molecules. Free radical scavengers may include polyphenols, flavonoids, and phenolic compounds.29 Moringa oleifera could enhance the antioxidant system present in the epididymis which in turn preserved and facilitated the process of spermatogenesis. Apparently, it may have reversed concentrations of gonadotropins (FSH and LH) and ultimately testosterone.30 Therefore the present study suggests that M. oleifera leaf extract (MoE) can be used as preventive and convalescent agent to attenuate the deleterious effects of cadmium on the testis

Limitation of the Study

Further studies are warranted in isolating the active components responsible for the reversal of cadmium induced decrease in sex hormone and testicular damage.

Fahey JW. Moringa oleifera: a review of the medical evidence for its nutritional, therapeutic, and prophylactic properties. Part 1. Trees for life Journal (TLJ). 2005;1(5):1–5

Maiga A, Diallo D, Bye R, Paulsen BS. Determination of some toxic and essential metal ions in medicinal and edible plants from Mali. Journal of Agricultural and Food Chemistry (JAFC). 2005;53(6):2316–21

Dr.Vinodini NA: She has Obtained her Ph. D. degree in 2005 from Manipal Academy of Higher Education Manipal, and currently she is working as Associate professor in the department of physiology Kasturba Medical college Mangalore Karnataka. Her field of research is toxicology, reperfusion injury and cancer and to find out preventive as well as therapeutic solutions from different plant sources. she has attended & presented papers at international & national level conferences and has received best paper award in an international conference organized by IISRO held at Pattaya She has more than 40 papers to her credit. She has also been a member of Board of Studies (BOS) for BDS curriculum, Manipal-University (MU), Karnataka, India. 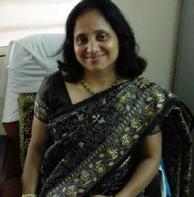 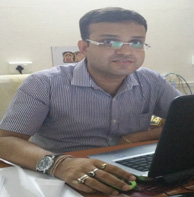 Journal:
Pharmacognosy Journal
‹ Triptolide Mediated Amelioration of Breast Cancer Via Modulation of Molecular Pathways up Characterization and Distribution of Flavonoids from Flowers in Different Horticultural Types of Begonia. ›