Leucas aspera is one of the important medicinal plants in Indian medical system and it belongs to Lamiaceae family. Leucas aspera (Willd) Link (L. aspera) belongs to Leucas genus, widely distributed throughout India. L. aspera has many vernacular names and is commonly known as Thumbai. Flavonoid is a phenolic compound which is widely distributed in the plants and responsible for many biological activities. Preliminary phytochemical analysis gives a broad idea to the researchers for their further research.

In this present study, we did a preliminary phytochemical screening, quantitative estimation of total flavonoids and fingerprinting profile of flavonoids compounds using five different solvent extracts obtained from leaves of L. aspera.

Results of this study revealed, L. aspera leaf is a rich source of flavonoid content and it can be used to alleviate many chronic illness and various diseases. This study results warrants for further isolation, identification and characterization of active principle which is responsible for the biological activity. 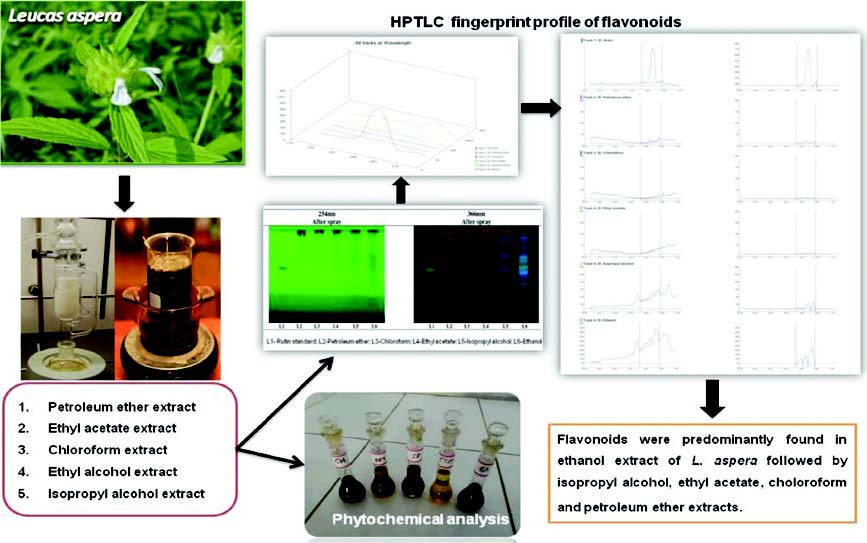 Leucas aspera (Willd) Link (L. aspera) belongs to Lamiaceae (Labiatae) family. It is a common weed in India and widely distributed throughout the country. The leaves of L. aspera are obtuse, linear or linearly lanceolate or petiolate. The length of the leaf is about 8.0 cm and 1.25 cm in broad. Though L. aspera has many vernacular names depending on the region, most commonly known as Thumbai.1 The juice of L. aspera leaves are used as remedy for chronic skin eruptions, chronic rheumatism and psoriasis.2 In villages L. aspera leaves are used as insecticides and mosquito repellent. Flavonoids are the phenolic compounds that comprise in large group of plants and widely distributed throughout the plant kingdom. Several studies have suggested that flavonoids are effective in prevention and treatment of many diseases.3,4 In our present study, we attempted to evaluate the presence of flavonoids content and fingerprinting profile of flavonoids present in the L. aspera leaves by HPTLC technique using different solvent extracts.

The plant L. aspera was collected from southern part of Tamil Nadu (Kandappakottai, Dindigul District) and was authenticated by Prof. P Jayaraman, Director, Institute of Herbal Botany and Anatomy Research Centre, Tambaram, Chennai (PARC/2014/2272). The leaves were then isolated, cleaned and dried under sun shadow. Dried leaves were crushed to powder and passed through pharmaceutical sieve no 40 and 80. Any materials which retained at sieve-80 were collected and used for extraction.

Five different solvents were used for extraction process with increase in polarity, which included petroleum ether (60-80°C), ethyl acetate, chloroform, ethanol (70%) and isopropyl alcohol. Soxhlet apparatus was used for petroleum ether extraction. Six hundred g of powdered leaf was extracted with 2.5 L of petroleum ether (60-80°C). Excess solvent was removed by distillation method. Crude extract was dried at vacuum desiccators and stored in a glass bottle at -20°C for further studies. All other solvent extracts were prepared by cold maceration technique. Weighed powder were soaked in individual solvents viz., ethyl acetate (200 g + 1.0 L), chloroform (200 g + 1.0 L), isopropyl alcohol (200 g + 1.0 L) and ethanol 70% (600 g + 2.5 L) in a separate round bottom flask for 72h with occasional shaking. After soaking, the mixture was heated at 30±5°C for 60 min. Heated solution was cooled to room temperature and filtered through muslin cloth and Whatman filter paper. Excess solvents were then removed by distillation method and allowed to evaporate at room temperature. Dried crude extracts were collected and stored in an individual glass bottles at -20°C for further studies.

All the five solvent extracts were screened for the presence of flavonoids with all respective testing procedures include shinoda’s test, alkaline reagent test, lead acetate test and sulphuric acid test as described in the textbook by Harborne JB (eds).5

Total flavonoids were estimated by using spectrophotometric technique.6 Flavonoids give yellow color when treated with aluminum chloride reagent (1% w/v) and this principle was used in flavonoid estimation. Rutin was used as standard in methanol solution (100 mg/ml). Test sample was prepared with methanol to the final concentration of 100 mg/ml. One ml of test and standard solutions were taken in a separate 10 ml volumetric flask and 1.0 ml of aluminum chloride reagent was added to both test and standard solutions. Volumes were made up to 10 ml with methanol and optical density measured at 410 nm against blank solution exactly at 15 min after adding aluminum chloride reagent.

Thin Layer Chromatography has been used for isolation of compounds form the crude extracts. Pre-coated silica gel on aluminum plates (Merck pre-coated Al. Sheets - 1.05554) were used as adsorbent for elution. Crude extracts were dissolved in HPLC-grade methanol to the final concentration of 10 mg/mL. Based on trial and error method toluene: ethyl acetate: acetic acid (55: 45: 1) was used as mobile phase (eluting agent). Spots were observed at 254 nm and 366 nm.

The present study was carried out on the crude extracts of petroleum ether, ethyl acetate, chloroform, ethanol and isopropyl alcohol obtained from leaves of L. aspera. Petroleum ether, isopropyl alcohol and ethanol extracts had shown to strong positive for flavonoids test than chloroform and ethyl acetate extracts Table 1. Quantitative estimation showed the higher concentration of flavonoids present in the ethanol extract compared to other solvent extracts. The summary of amount of total flavonoids content present in each extract was described in Table 2.

HPTLC studies showed blue, greenish blue and yellowish green coloured fluorescent zones at UV 366 nm after derivatization. These fluorescent zones confirmed the presence of flavonoids in the L. aspera leaf extracts Figure 1. The order of presence of flavonoids (fluorescent zone) in L. aspera extract was ethanol > isopropyl alcohol > ethyl acetate > chloroform > petroleum ether. The Rf value of the extracts were found to be 0.61, 0.66, 0.67, 0.70, 0.76 and 0.77 of the peaks. Out of 10 peaks 6 were identified as flavonoid compounds. The complete details of Rf values and area of the peaks were presented in Table 3. Rutin was used as the standard compound for flavonoid identification.

Preliminary phytochemical studies give a broad idea to researchers for their further research. In this present study, preliminary phytochemical screening confirmed the presence of flavonoids in the L. aspera leaf extracts. Out of which, petroleum ether (non-polar), isopropyl alcohol (polar) and ethanol (polar) extracts had shown strong positivity. The quantitative estimation revealed, total flavonoid compounds are almost equally present in the L. aspera leaf extracts. But the HPTLC fingerprint profiles showed, among the five solvent extracts, flavonoids were predominantly found in ethanol extract of L. aspera followed by isopropyl alcohol, ethyl acetate, chloroform and petroleum ether extracts. At least two types of flavonoids were observed in each extract Figure 2 and 3. Four unknown compounds were observed by HPTLC fingerprint profile of flavonoids in different solvent extracts of L. aspera leaves. The summary of HPTLC chromatogram of different solvent extracts of L. aspera is presented in Table 4. Our study findings are comparable with the existing literature where they used methanol extract of whole plant of L. aspera.7 Flavonoids have potent antioxidant properties and it can modulate the various enzymatic activities due to their interaction with various biomolecules.8 Traditionally L. aspera was used as insecticide and antipyretic. Several studies showed L. aspera has a potential anti-diabetic effect9-11, larvicidal effect 12-14 and antimicrobial effect.15-17 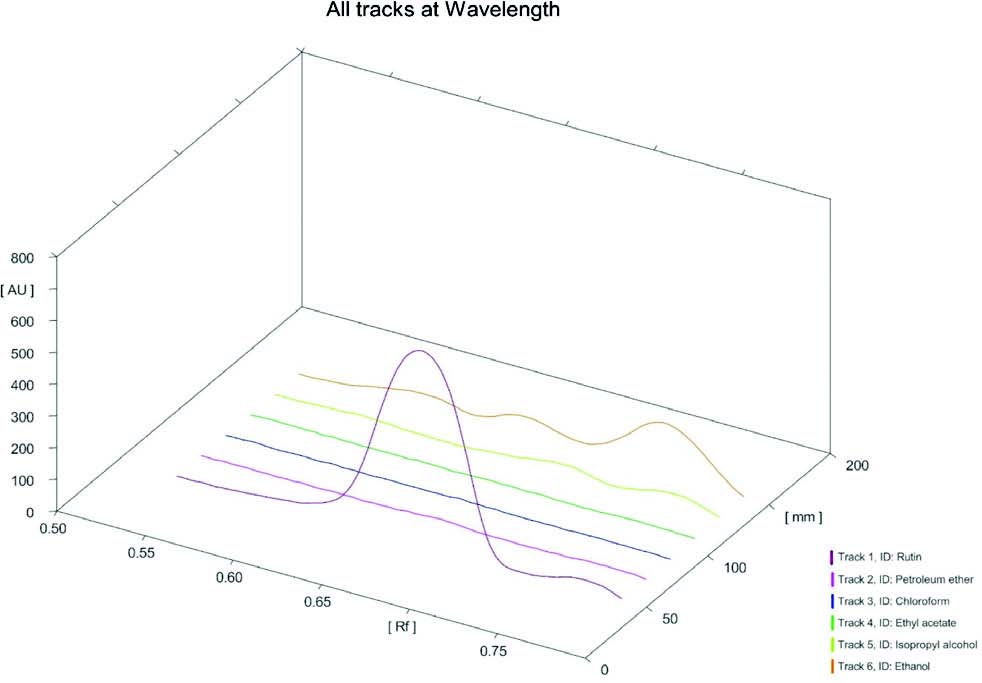 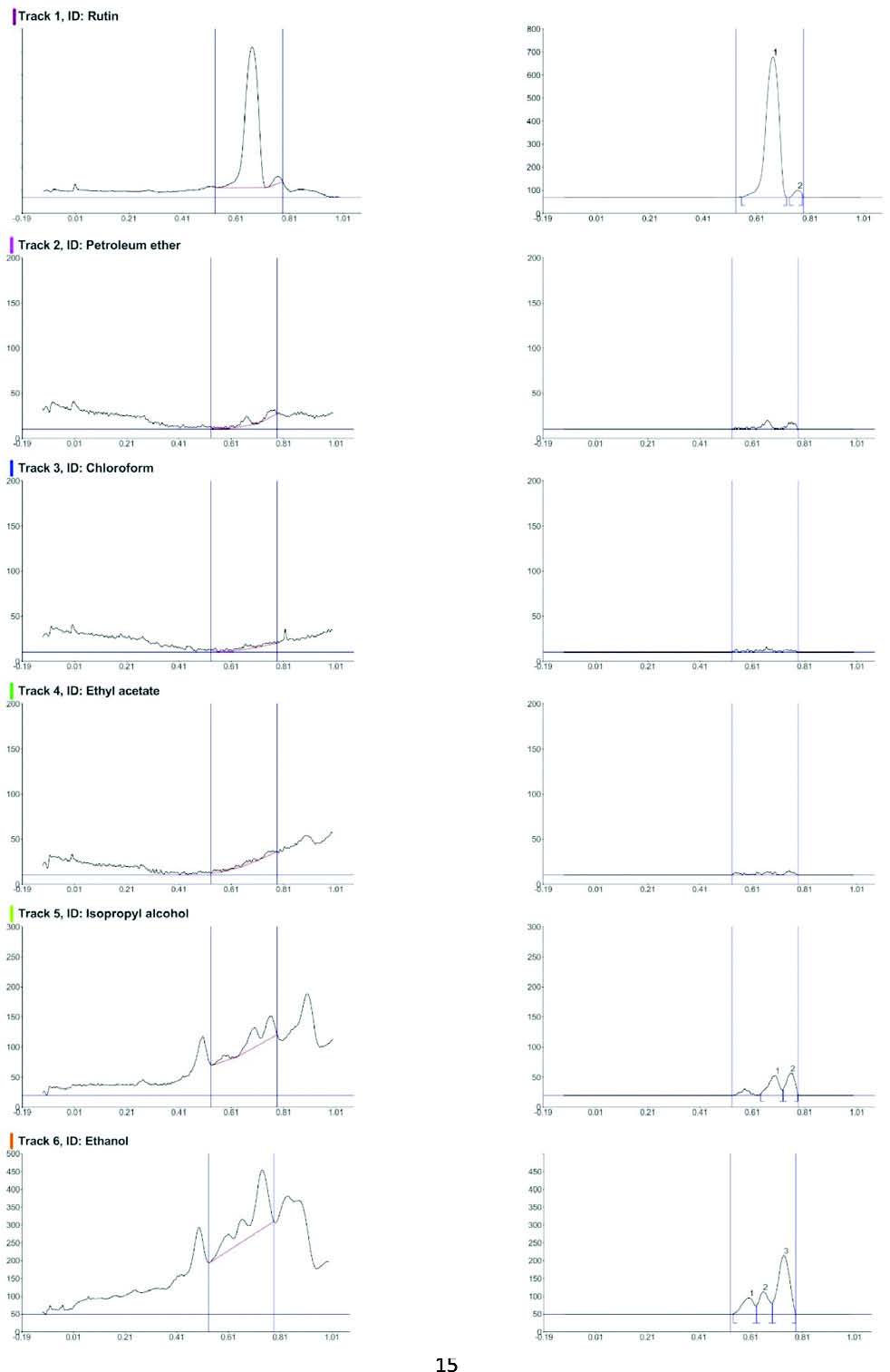 In recent years the usage of Indian Medicine system and Traditional Medicine systems are increased. Many people have started using alternative medicines particularly in chronic disorders. Herbals and phytocompounds based medicines are believed to be less toxic and effective. Leucas aspera is a good source for flavonoid compounds and seems to have promising phytocompounds that can be used to alleviate many chronic illnesses with its isolated active compounds. Further studies are required for identification and characterization of flavonoid compounds present in the Leucas aspera leaves, which is potential for therapeutic applications.

[4] Conflicts of interest CONFLICTS OF INTEREST All authors have no conflict of interest. 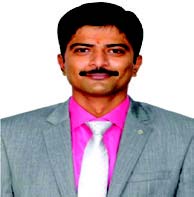