The present study was undertaken to evaluate the possible ameliorative role of curcumin, capsaicin and their combination against lipopolysaccharide (LPS) induced hepatic toxicity in mice.

Animals were distributed into five experimental groups: Normal control, vehicle control, curcumin, capsaicin and combined curcumin and capsaicin treatment groups respectively, for 7 days prior to LPS induced liver toxicity (3 mg/kg b.w. in saline). Hepatoprotective effect of individual and combined spice principles were evidenced by the measurement of serum marker enzyme activities such as, SGPT, ALP and TB and it was further confirmed by histopathological observation of liver tissue section.

Dietary curcumin and capsaicin individually are protective to LPS induced hepatotoxicity, the beneficial effect was found to be more when the two compounds were fed in combination. 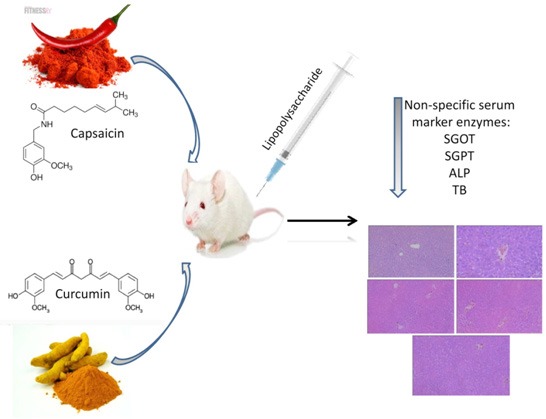 Liver diseases have become one of the major causes for morbidity and mortality in all over the world. Liver cirrhosis is a significant cause of global health burden, with more than one million deaths in 2010. According to WHO report globally alcohol consumption is estimated to cause from 20% to 50% of liver cirrhosis and 325 million people were living with chronic hepatitis infections (HBV or HCV) worldwide and 1.34 million people died of viral hepatitis in 2015.1 According to the medical certification of cause of death reports 2014, India ranks 61 position in the world ranking list with 68.1% of deaths due to liver diseases.2 William Bernal et al., (2013) reported that, in India 61% of acute liver failure was due to viral infections (Hepatitis A, B, and E), 7% was due to others and 31% of liver injury was due to unknown reasons.3 Hepatotoxicity due to drug abuse to be the most common contributing factor for acute liver injury/failure in developed countries, where 53% and 68% of acute liver failure were documented in United States and United Kingdom respectively. Whereas, 1% drug induced liver damage was reported in India.3-5

Liver is the body’s most complex and largest organ in the body. It plays a major role in maintenance of internal environment, site of immune tolerance while initiating an adequate immune response to infectious agents, thereby acts as a primary line of defense in mucosal immunobiology. As an essential interface between the environment and the internal milieu, liver is continuously exposed to toxic effluents, drug metabolites, and infectious agents6 etc. causing liver illness.

LPS is an outer membrane component of gram negative bacteria and widely used model to study the hepatic injury in vitro and in vivo. LPS induces the activation of kupffer cells, which initiates detoxification by removing of some polysaccharide moieties, which is then presented to hepatocytes for further metabolism.7-9 However high concentration of LPS overwhelm the detoxification process by activating kupffer cells to release chemo-attractants, leukotrienes, interleukins and complement proteins which stimulate neutrophils and expression of adhesion molecules,10,11,12 thereby activating hepatic macrophages to initiate lipid peroxidation, platelet aggregation, microthrombosis, consumptive coagulopathy and blocks sinusoids, results in the disturbance in microcirculation, cell injury and further tissue damage/sclerosis.12-14

Many reports have emphasized on the importance of the interactions between nutrition and liver health, including the slowing down of liver damage especially fatty liver, chemicals and infectious agents-induced liver damage.15,16,17 Spices are nutraceuticals which have been used since ancient times as predominant class of food adjuncts not only to enhance the taste, colour, flavor of foods and beverages but also for their preservative and medicinal properties. Dietary spice principles curcumin, capsaicin and eugenol were proven to be effective antioxidative agents, cuminaldehyde, piperine, linalool and zingerone were found to be lipid peroxidation inhibitors18 by enhancing the activity of endogenous antioxidant enzymes and by quenching oxygen free radicals.19,20 Dietary curcumin, capsaicin and garlic were protective against oxidative damage to erythrocytes and liver of hyperlipidemic/hypercholesterolemic rats.21,22 Curcumin and capsaicin are protective to iron induced hepatotoxicity, where deposition of iron in hepatic parenchymal cells results in fibrosis and cirrhosis which was measured in terms of lipid peroxidation and elevated levels of plasma alanine aminotransferase, aspartate aminotransferase and lactate dehydrogenase. These beneficial effects were found to be more when the two compounds were fed in combination.23,24

Dietary curcumin, capsaicin and lipopolysaccharide were procured from Sigma-Aldrich (USA). The assay kits for SGOT, SGPT, ALP and TB were purchased from Robonik (India) Pvt. Ltd., (Mumbai, India). All other chemicals used were of analytical grade.

Adult male albino mice, weighing 25-30 g housed in individual stainless steel cages, were maintained on standard pellet diet with ad libitum water. The animals were maintained under controlled conditions of temperature with 12 h light-dark cycle. The animals were used after an acclimatization period of three days in the laboratory animal house. Animal experiments were carried out taking appropriate measures to minimize pain or discomfort in accordance with the guidelines of the animal ethics laid down by the NIH (USA) regarding the care and use of animals for experimental procedures and with due clearance from the Institute’s Animal Ethics Committee CPCSEA (Ref: NCP/IAEC/CL/07/12/2010-11).

Animals were fasted for 12 h and then divided into five groups (6 Animals / Group) as mentioned below.

Curcumin and capsaicin were dissolved in olive oil and were administered orally for seven days at respective doses. On the 7th day after 6 hrs of the administration of curcumin, capsaicin and combined curcumin and capsaicin (all the experimental samples) by giving a single dose of LPS dissolved in PBS. At the end of the experiment (LPS administration), all the animals were subjected to fasting for 6 hrs and later sacrificed under mild anesthesia.

Histological analysis: The liver tissues were removed and fixed in neutralized 4% paraformaldehyde. Specific lobes were taken, embedded in paraffin, and sectioned at 6 μm. The sections were treated with xylene to remove paraffin, followed by rehydration with plenty of water. The tissue sections were then stained with hematoxylin and eosin (H&E) to observe general morphology. Histological changes were evaluated under a light microscope.

Effect of curcumin, capsaicin and their combination on LPS induced Hepatotoxicity in Mice

[i] Values are expressed as mean ± SEM of six animals per group. One-way ANOVA was performed followed by Dunnett’s multiple comparison tests. The values of *p<0.05, **p<0.01 and ***p<0.001 were considered as statistically significant.

Effect of curcumin, capsaicin and their combination on LPS induced liver histological examination

The sections of liver obtained from the normal control mice showed the characteristic hepatic architecture of the normal central vein and surrounding hepatocytes (Figure 1A). While, the liver sections obtained from negative control group exhibited ballooning degeneration, intense hemorrhage and necrosis in most of the hepatocytes. The portal area exhibited infiltration of inflammatory cells and this infiltrated area divided the hepatic parenchyma into lobules (Figure 1B). Conversely, there were few histopathological alterations detected in the liver sections of the curcumin and capsaicin-treated group although rare ballooning degeneration was observed in the hepatic parenchyma allied with few inflammatory cells infiltration (Figure 1C and D). Interestingly, the liver sections obtained from the group treated with combined curcumin and capsaicin had normal architecture indicating potential benefit of combined spice principles in nullifying the potential toxicity of LPS to liver (Figure 1E). 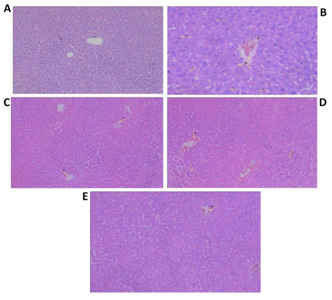 Drug, chemical or endotoxin induced liver injury represents a major impediment in the modern science. Usually a small dose of LPS triggers non-injurious response, but the subsequent stimuli that are pathologically inert can synergistically enhance the physiological/biochemical response from liver.25 Many researchers evaluated the effects of curcumin and capsaicin against CCl4 and drug induced liver toxicity. In addition, the beneficial effect of combined curcumin and capsaicin was proven against iron induced hepatotoxicity. Therefore the present study was designed to evaluate the beneficial influence of dietary curcumin, capsaicin and their combination against LPS induced liver toxicity in mice.

Many reports have utilized the analysis of serum non-specific enzymes as a useful tool in estimating the risk of LPS induced liver damage. The cascade of activities initiated by LPS intoxication leads to disruption of structural integrity of the hepatic cell membrane and release of SGOT, SGPT, ALP, lactate dehydrogenase (LDH) and alkaline phosphatase (AP) hepatic non-specific enzymes into the blood stream from the affected, necrotic and dead hepatocytes and possible hepatic dysfunction manifested by increased serum total bilirubin, thus producing signs of hepatotoxicity.26,27 In the present study, the observation of elevated level of serum SGOT, SGPT, ALP and total bilirubin in the group of mice treated with LPS alone is consistent with these reports and might explain the inflammation manifested in liver.

Earlier reports state that supplementation of natural antioxidants were proven to be an excellent prevention strategy for many diseases, including diabetes liver injury, liver fibrosis, cancer and ageing.28-32 Natural antioxidants curcumin, capsaicin and their combined form prevented the LPS induced hepatotoxicity in mice model. Administration of curcumin (20 mg/kg b.w.) and capsaicin (4 mg/kg b.w.) showed significant detoxification, thereby reduced the leakage of SGOT, SGPT, ALP and total bilirubin from the hepatocytes indicating the inhibition of LPS induced toxicity in mice. These results are in agreement with the earlier reports of Zhanq et al.34 (2014) and Abdel et al.33 (2012). Where, intraperitoneal administration of curcumin (200 mg/kg b.w) and capsaicin (15, 150 and 1500 μg/kg b.w) significantly reduced the LPS induced liver toxicity respectively. However, combined curcumin and capsaicin (10 mg/kg + 2 mg/kg b.w) protective activity is found to be more than individual molecules. Our current findings are consistent with previous reports of Manjunatha et al. (2006), where supplementation of combined curcumin and capsaicin was found to be more protective against iron-induced hepatotoxicity, when compared with the individual curcumin and capsaicin fed animals groups.

The present study suggest that dietary intake of curcumin and capsaicin individually are protective to LPS induced liver injury in vivo, and the beneficial influence was appeared to be higher when the two compounds were fed in combination.

This work was supported by a grant from Department of Science and Technology-Science and Engineering Research Board (DST-SERB) (SB/EMEQ-343/2013), Govt. of India, New Delhi. First author (TV) thanks DST-SERB for JRF. Second author (HM) thankful to DST-SERB for funding under the program “Empowerment and Equity Opportunities for Excellence in Science”.

[2] Conflicts of interest CONFLICT OF INTEREST No conflict of interest.

Standard error of the mean

Report on medical certification of cause of death 2014. Office of the Registrar General, Government of India. 2014. Available from: http://www.censusindia.gov.in/2011-Documents/mccd_Report1/mccd_report_2014.pdf.

Reddy AC, Lokesh BR. Studies on the inhibitory effects of curcumin and eugenol on the formation of reactive oxygen species and the oxidation of ferrous iron. Molecular and cellular biochemistry. 1994;137(1):1–8

Kempaiah RK, Srinivasan K. Influence of dietary curcumin, capsaicin and garlic on the antioxidant status of red blood cells and the liver in high-fat-fed rats. Annals of nutrition and metabolism. 2004;48(5):314–20