Kaffir lime (Citrus hystrix D.C) has been used for a long time in agricultural and alternative medicine. Kaffir lime leaf (KLL) had been proved effective against certain fungi that could infect human body.

To study the antifungal effect of KLL extracts on Aspergillus niger and Candida albicans.

This is a laboratory-controlled prospective study conducted in Universiti Sains Malaysia. KLL was extracted with 70% ethanol and aqueous via Soxhlet extraction method. The concentrated extract then freeze dried to obtain powdered form which was diluted to establish five different concentrations of 50 g/ml, 25 g/ml, 12.5 g/ml, 6.25 g/ml and 3.125 g/ml. Sabouraud Dextrose Agar (SDA) lawned with tested fungal isolates were inoculated with the extracts using well-diffusion method. Zone of inhibition was measured followed by minimum inhibitory concentration (MIC).

Aspergillus niger able to produce several secondary toxic metabolites such as 3-nitropropionic acid and ochratoxin A.12 In contrast, cell surface hydrophobicity, biofilm formation and adhesion composite resin process are the important factors in defence mechanism of Candida albicans.13 The importance of this character is a reduced susceptibility to the host immune system and to conventional antifungal drug therapy.13

Eradication of this entity remains a challenge to medical practitioners especially the otorhinolaryngology. Until today, there has been no standardised treatment for otomycosis.14 Minimal data is available regarding safety of use of ototopical medication especially in presence of tympanic perforation.15 In a case of perforated tympanic membrane, the topical antifungal can readily reach cochlea by diffusion through the round window. If the agent has ototoxic property, temporary and permanent electrophysiology changes within inner ear or morphological injury to stria vascularis, hair cells and supporting cells of organ of corti may occur. This situation can lead to ototoxicity and sensory neural hearing loss.14,15

When choosing the correct topical antifungal drugs, certain factors should be considered such as water soluble, low risk of ototoxicity, low allergic effect, a broad spectrum antimitotic drug, suitable for application on pediatric patients, and commercially available.15 There were very limited publications on antifungal effect of KLL especially to Candida albicans and Aspergillus niger. Hence, in this study, we are considering the antifungal properties of KLL extracts towards pathogenic otomycosis, particularly Aspergillus niger and Candida albicans.

This is a laboratory-controlled prospective study. It was fully conducted under a well-controlled environment in the Medical Microbiology and Pharmacology laboratories in the School of Medical Sciences, Universiti Sains Malaysia (USM). This study has been approved by the Human Ethics Committee of USM.

KLL were collected from a single area, prepared for USM herbarium identification (voucher reference number 11538). The remaining KLL were washed with distilled water and dried in oven at 45°C for two days. Dried KLL leaves should maintain the original green colour. Then, the dried leaves were grinded using leaf grinder machine to smaller course powder form and stored in tightly sealed glass container.

Preparation of in vitro culture medium

The fungal isolates were taken from archives of microbiology laboratory in School of Medical Sciences, USM, which already been identified earlier from patients of otorhinolaryngology clinic. Both Candida albicans and Aspergillus niger was used as tested fungi. Candida albicans from SDA plates were suspended in sterile distilled water and adjust to 106 cells with colony forming units (CFU)/ml9 (0.5 McFarland standard). Nephelometer was used to adjust the turbidity of fungal suspensions so that the number of fungal was within a given standard McFarland range. Similar process done for Aspergillus niger.

The suspended sterile fungal organism labelled and used for the next step to lawn and prepare for testing in SDA plates. Within 15 min of diluting the organism, sterile swab was dipped into the properly adjusted inoculums of tested fungal organism. The sterile swab was slightly lifted, and then the swab was firmly rotated several times against the upper inside wall of the tube to express excess fluid. The plate was open slightly to lawn the fungal organism. Later, by using glass pipette, four wells were created in four quadrants.

Initiation of in vitro test and data collection

The SDA plate was kept lid side up in a 30°C incubator. Before inserting in an incubator, micropipette was used to drop 100 microliters of extracts into wells. The upper quadrant well, the aqueous KLL extract was inserted with its aqueous control at opposite site. The lower quadrant well, the alcohol extracts was inserted with its alcohol control at opposite site (Figure 1A & 1B). This was done using different concentration which was diluted prior to this. Five different replicates were done. The plates were examined every day to make sure no spillage or growth of other organism. The measurement was done on third day whereby this was the perfect time to visualize the margin of inhibition. After the third day, there was overgrowth especially the Aspergillus niger which may jeopardize the safety of the staff. Measurement was done of zones showing complete inhibition by gross visual inspection.

Minimum inhibitory concentration measured by agar diffusion method to determine MIC of each tested KLL extracts. After measurement of all the result, a scattered plot graph X2 Versus Log Concentration was plotted. A linear line represents the mean value was drawn and the area where X2 equal to zero was taken for the MIC level of the extract. Antilog of the selected value was mathematically identified as MIC. The X value represent the zone of inhibition diameter subtract the well diameter and divided by two.

Aspergillus niger showed sensitivity to both aqueous and alcohol KLL extracts (Table 1A). Growth of Aspergillus niger inhibited in KLL alcohol and aqueous extract in concentration of 50 g/ml. However, the growth was resistance to concentration from 25 g/ml, 12.5 g/ml, 6.25 g/ml and 3.125 g/ml. One replicate of samples at different concentrations whereby aqueous KLL extract tested at right upper quadrant of petri dish and alcohol KLL extract tested at left upper quadrant of each petri dish (Figure 2A). Mean zone of inhibition is higher in extract concentration of aqueous compared to alcohol. 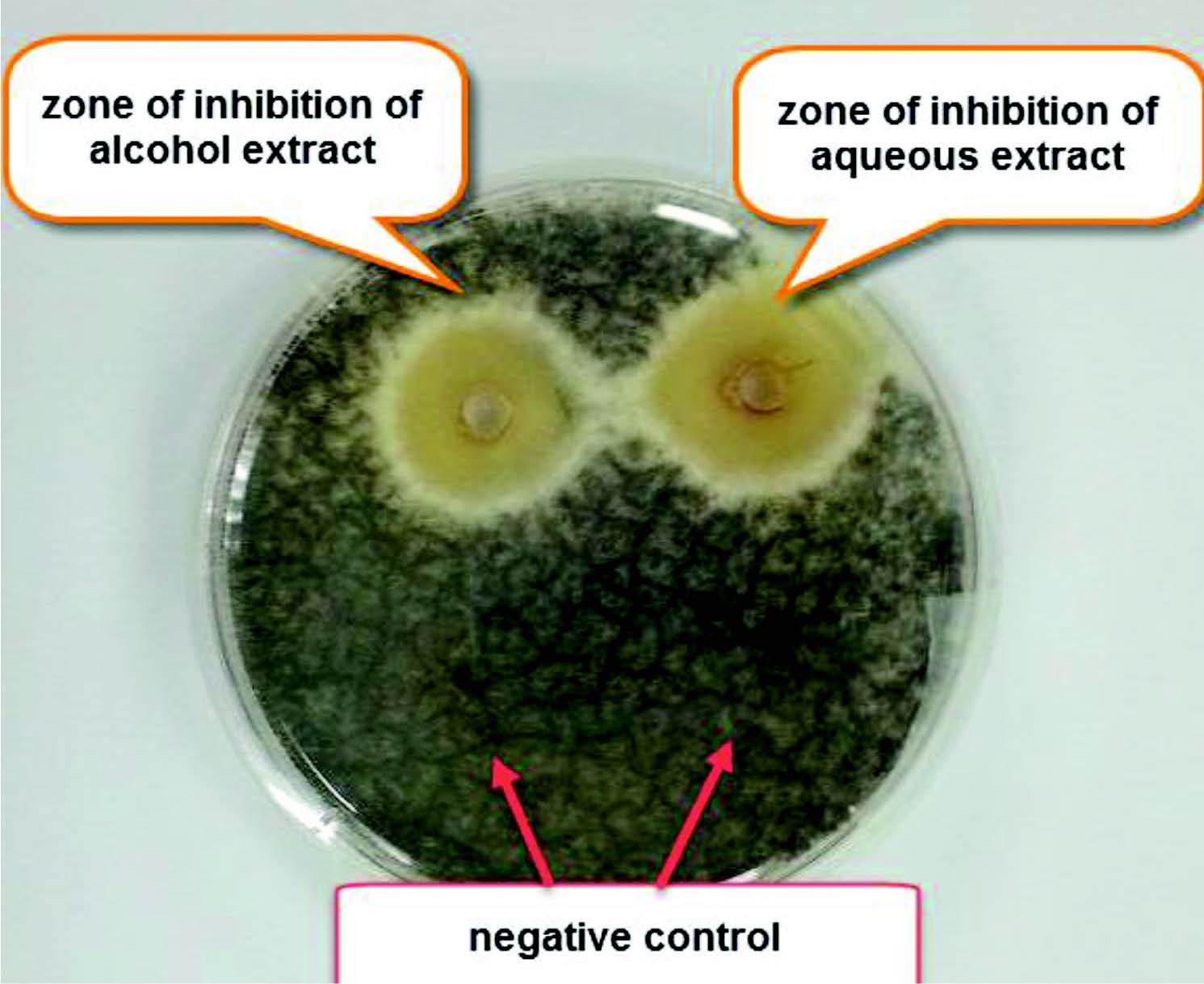 Positive zone of inhibition against Candida albicans with negative control in aqueous and alcohol extract at 12.5 g/ml concentration. 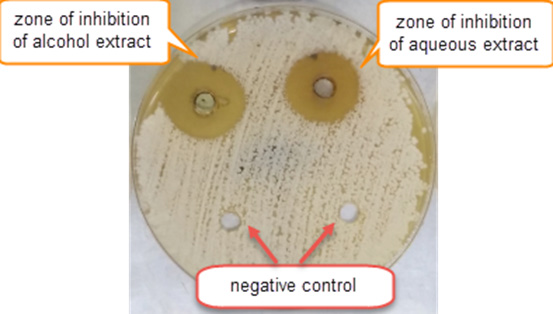 Comparison of means of zone inhibition between aqueous and alcohol extracts against growth of Aspergillus niger at 50.0 g/ml concentrations

Candida albicans showed sensitivity to both aqueous and alcohol KLL extracts (Table 2A). Growth of Candida albicans was inhibited in KLL alcohol and aqueous extract concentrations of 50 g/ml, 25 g/ml and 12.5 g/ml. One replicate of samples at different concentrations whereby aqueous KLL extract tested at left upper quadrant of petri dish and alcohol KLL extract tested at right upper quadrant of each petri dish (Figure 2B). Mean zone of inhibition increase in proportion to extract concentration.

One replicate of samples showing zone of inhibition of kaffir lime leaf extracts on Aspergillus niger growth at 5 different concentrations.

[i] One-Way ANOVA test was applied

[i] aScheffe test was applied

[i] One-Way ANOVA test was applied

[i] aScheffe test was applied 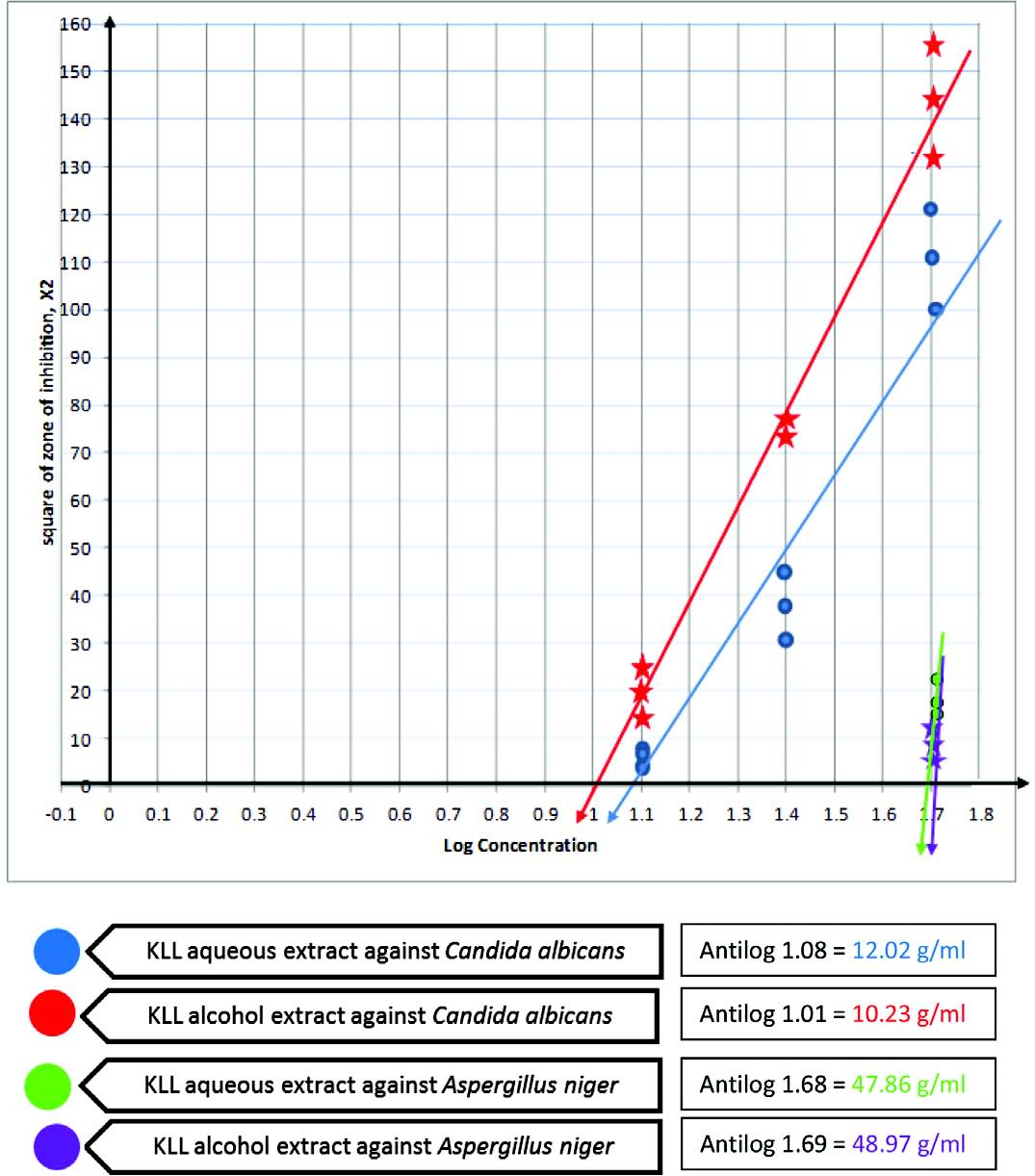 As for Aspergillus niger, we noted there was antifungal activity towards Aspergillus niger but it was more remarkable in aqueous KLL extract as compared to alcoholic KLL extract, a total opposite to Candida albicans. Not many literatures mentioned on antifungal effect of KLL towards Aspergillus niger. Unlike Candida albicans, Aspergillus niger does not exhibit biofilm formation or adhesion composite resin. Some of the selected Aspergillus spp. are known to produce secondary metabolites or toxic substances that are capable of eliciting toxicity in animals and human.20 The pathogenicity of Aspergillus spp. closely related to these mycotoxins. Study by Thanaboripat et al. revealed that KLL extract at all concentrations had significant inhibitory effect on the fungal growth of Aspergillus flavus (p<0.001). Aspergillus flavus has the capability of producing toxic secondary metabolites, known as aflatoxin.21 Although Aspergillus niger does not have the ability to produce aflatoxin, this fungal produce almost similar mycotoxin such as 3-nitropropionic acid and ochratoxin A.20,21 Possible explanation regarding inhibition more in aqueous extract rather than alcoholic is depending on the bioactive constituent in the extract. Extraction using water as solvent will preserve certain substance which will strongly inhibit Aspergillus niger growth. Rammanee and Hongpattarakere evaluated on inhibitory activities of ethyl acetate extracts and hydrodistillated essential oils from five cultivars of tropical citrus epicarps against Aspergillus fumigatus, Aspergillus niger, Aspergillus flavus, Aspergillus parasiticus, and Penicillium sp. Among all citrus cultivars, only extract from kaffir lime inhibited the growth of all fungi tested. The result appeared to be more sensitive to the hydrodistillated oil than the ethyl acetate extract which suggestive that fungal growth inhibition is solvent dependent.22 In our study, antifungal activity of Aspergillus niger is better in aqueous KLL extract than alcohol extract (p<0.001). Despite of using hydrodistillated oil, we used other aqueous base extraction method using soxhlet apparatus that showed almost similar result.

Kaffir lime contained multiple antimicrobial compounds with major constituents of citronellol, limonene, linalool, and o-cymene, correlating to its broad-spectrum inhibition.26 Combinations of limonene with other components such as citronellol and linalool may be responsible for the antifungal activity of kaffir lime because they were present in the significant level. In addition, many other minor compounds such as o-cymene, sabinene, β-myrcene, β-pinene, and α-pinene should not be ignored.22 The antimicrobial activity of these compounds was previously reported. Pure limonene at a concentration of 25 μl/l was reported to effectively inhibit Fusarium verticillioides.23 P-cymene has strong mycelial growth inhibition towards F. oxysporum and can cause destabilization of B. cereus cytoplasmic membrane.24 Other monoterpenes including citronellol, limonene, β-myrcene, β-pinene, α-pinene, and α-terpineol able to inhibit hyphae growth.25 Also, citronellal and citronellol were reported to effectively inhibit human pathogenic fungus, Microsporum gypseum, which is known to cause hair and scalp infections.26 Therefore, the inhibitory activity was contributed from the synergistic effect of both major and minor constituents present in the kaffir lime.

KLL showed that the leaves extracts possessed remarkable antifungal activity against all tested fungi, evidenced by presence of zone of inhibition in both extracts for both fungi growth. Antifungal activity of Aspergillus niger is better in aqueous KLL extract than alcohol extract. In contrast, antifungal activity of Candida albicans is better in alcohol KLL extract than aqueous extract. Candida albicans was inhibited better as compared to Aspergillus niger in both aqueous and alcohol KLL extract. We would suggest that KLL able to achieve medical use as ototopical antifungal with low risk of ototoxicity. Furthermore, with easy availability of KLL in Malaysia, it can be cheap and environmental friendly source of medication.

[9] Conflicts of interest CONFLICT OF INTEREST The authors are declared no conflict of interest.

Journal:
Journal of Young Pharmacists
‹ The Antifungal Effect of some 4-Chloro-6-Methoxy-N, N-Dimethylpyrimidin-2-Amine Derivatives Containing a Heterocyclic Compound on the Important types of Fungi up Computational Study of Bufadienolides from Indonesia’s Kalanchoe Pinnata as Na+/K+-ATPase Inhibitor for Anticancer Agent ›