Solvent fractions and decoction of Eleusine indica leaves were tested for their ability to inhibit angiotensin-converting enzyme (ACE), an important component of the Renin-Angiotensin-Aldosterone System which is a critical regulator of arterial blood pressure. The ACE inhibitory activity of each fraction was measured by employing a colorimetric assay based on the hydrolysis of histidyl-hippuryl-leucine (HHL) by ACE. Preliminary assay results revealed that the ethyl acetate fraction exhibited the highest antihypertensive activity with a percent inhibition of 51.51%. This fraction was considered for further isolation using a bioassay-guided fractionation scheme.

One of the biggest single risk factor of deaths worldwide is hypertension. Globally, cardiovascular diseases account for about 17 million deaths a year; 9.4 million of which are accounted to hypertension according to the World Health Organization.1 The World Health Organization also reported that the continuous increase of prevalence of hypertension is attributed to population growth, ageing and behavioral risk factors like unhealthy diet, physical inactivity, excessive salt and alcohol intake, persistent stress and excess weight.

Hypertension has a reputation of being a “silent killer” due to its lack of distinct symptoms during its early stages. Being generally asymptomatic, hypertension does its immense harm to the body through ‘target organ damage’.2 To reduce the risk of hypertension and other associated health complications, it is often recommended that one indulge in dietary and lifestyle changes. However, drug treatment may prove essential for patients whose lifestyle changes prove ineffective and inadequate.3

Hypertension treatments have widely evolved-from low sodium dietary regimens to a vast arsenal of modern pharmaceuticals. The diuretics, β-blockers, and calcium antagonists are some of the earliest developed anti-hypertensive drugs. Although these group of drugs were found to be extremely effective anti-hypertensives, their effectiveness are often marred with their associated deleterious side effects.4

The Renin-Angiotensin-Aldosterone System (RAAS) which serves as one of the most powerful regulators of arterial blood pressure has become a major focus on the hunt for targets of hypertension alleviation.5 Regulation of blood pressure by RAAS is via angiotensin release and body electrolyte content via aldosterone release.6 One component of the RAAS is the hydrolase, Angiotensin-Converting Enzyme (ACE), is responsible for converting angiotensin I to angiotensin II, a known potent vasoconstrictor. Angiotensin II stimulates both the synthesis and release of aldosterone from the adrenal cortex resulting to an increase in blood pressure via sodium retention.7 Thus, the concept of inhibiting ACE became a popular and effective therapeutic approach in treating hypertension and other cardiovascular diseases.

The first oral ACE inhibitor, captopril, l was considered a breakthrough in managing blood pressure and was also an early example of a structure-based drug design.4 Other synthetic ACE inhibitors which are widely used for clinical use in the treatment of hypertension include enalapril, alcacepril, and lisinopril.8 Just like the early antihypertensive drugs, synthetic ACE inhibitors are also associated with a few side effects such as dry cough and angioedema.9 The current trend in anti-hypertensive drug research is finding potential ACE inhibitors from natural products that mimic synthetic ACE inhibitors and provide health benefits without adverse effects. There have been several bioactive compounds extracted from plants which were found to possess in vitro ACE inhibitory activity such as flavonoids, hydrolasable tannins, phenylpropanes, xanthones, fatty acids, terpenoids, alkaloids, proanthocyanidins, oligosaccharides, and peptide amino acids.10

An abundantly available plant is Eleusine indica Linn. Gaerth. or Indian goosegrass has been reportedly used as a natural diuretic. E. indica is a member of the Poaceae family.11 It is a native plant in tropical and subtropical regions like the Philippines and is adventitious and invasive.12 The plant can grow up to 1 meter. The stem is usually white or pale green and is laterally flattened with a few strands of “grainy hair” on the edges. The leaf sheaths are also laterally flattened and its leaf blades are flat or folded and linear-lancoelate. This plant has been commonly used in the folkloric medicines among South East Asian and African countries. The decoction from its leaves is used to treat asthma, muscle pains, febrifuge, diarrhea, and dysentery. In Nigeria, it is used to treat diabetes and malaria. In other countries, it is used to treat bladder disorders, convulsions and childbirth aid.12 The whole plant is usually used as diuretic, laxative, and depurative which makes it useful for the treatment of influenza, hypertension, and oliguria.12 The antioxidant, antibacterial, antifungal, antiplasmoidal, anti-cancer, and anti-inflammatory activities of E. indica has already been studied. The main focus of this study is to investigate and evaluate the anti-hypertensive effect of E. indica via ACE inhibition.

Leaves of E. indica were washed and air-dried for at least 72h. Thereafter, it was homogenized and was soaked in distilled methanol for three days and filtered. The filtrate was concentrated in vacuo utilizing a rotary evaporator at 85-95 rpm and 40°C. The concentrated filtrate was then collected, weighed and stored in Corning tubes.

About 30.0 g of crude methanolic extract were partitioned using hexane, ethyl acetate, and water to obtain their respective fractions. The resulting extracts were concentrated in vacuo using a rotary evaporator.

About 100 g of E. indica leaves were homogenized and soaked in deionized water. This heterogeneous mixture was then heated to medium to boiling temperature for about 2-3h. The mixture was simmered for 30 min. Then, the mixture was removed from heat and was allowed to cool slightly. The resulting decoction was subjected to in vitro ACE assay.

The cleavage of the substrate hippuryl-histidyl-leucine (HHL) by ACE mixed with pyridine and benzene sulfonyl chloride to produce hippuric acid (HA) and histidyl-leucine (HL) was based on the method developed by Jimsheena and Gowda.13 The therapeutic drug captopril was used as the positive control.

The assay mixture was composed of 35 μL of 0.05 M sodium borate buffer (pH 8.2) containing 0.3 M NaCl, 35 μL 500 μg/mL of plant extracts, 20 μL of 5 mM HHL, and 10 μL of ACE enzyme extract from rabbit lung (Sigma A6678). The first step of the method is a 10 min pre-incubation step at 37°C to establish contact between the inhibitor and ACE. After the pre-incubation step, 20 μL of 5 mM HHL was added to each to initiate ACE reaction. Then, the mixtures were incubated at 37°C for 30 min. The reaction was arrested by adding 50μL of 1 M HCl. This was immediately followed by the addition of 100 μL pyridine and 50 μL benzenesulfonyl chloride (BSC) to develop the yellow color. Then the absorbance was measured at 410 nm using a microplate reader.

The following formula was used to determine percent inhibition:

The crude fraction with the highest percent inhibition was subjected to vacuum liquid chromatography (VLC). A short column was dry-packed with 70.0 g of silica using suction and manual pressing to make a sorbent bed (bed volume of 150 mL) onto which the sample, preadsorbed in silica, was added. Then the column was pre-treated with 300-mL hexane under light suction. Thereafter, the column was successively eluted with a series of solvents consisting of hexane, hexane combined with increasing amounts of ethyl acetate in 10% increment, ethyl acetate, ethyl acetate combined with methanol (1:1), and methanol. Methanol was used to wash all remaining samples from the column. The fractions were collected in numbered Erlenmeyer flasks. Then the solvents from each fraction were removed by concentrating the fractions in vacuo using a rotary evaporator. The dried fractions obtained using VLC were subjected to in vitro ACE assay. Lastly, the IC50 value of the VLC fraction with the highest percent inhibition was determined. Samples with similar thin-layer chromatography profiles were pooled.

T-test was used to determine if there was a statistically significant difference between means of treatments. Q-test was employed to reduce the number of replicates from 4 to 3. Data were expressed as means ±S.D. Differences were evaluated using one-way analysis of variance (ANOVA) test completed by a Dunnett’s multicomparison test.

The crude fractions with the aqueous fraction and decoction out from the leaves of E. indica were subjected to ACE inhibition assay. Figure 2 shows the percent inhibition of the various fractions.

Elbl and Wagner developed one of the earliest assays for ACE inhibition, stated that an extract is considered active if it is able to inhibit the enzyme by more than 50%.14 These extracts should therefore be considered for further isolation and purification. Results showed pronounced activities for both methanolic and ethyl acetate fractions with percent inhibition of 68.84% and 51.51% respectively. These activities are comparable with the activity of the positive control, captopril, which has a percent inhibition of 76.64%. Ideally, if the methanolic fraction is found to have good activity, the hexane and ethyl acetate extracts should produce better activity. However, there was an observed decrease in activity for both hexane and ethyl acetate extracts as shown in the results. This could be explained by synergistic effects, a phenomenon in which activity is lost in purified fractions.14 Optimization of test compound concentration may produce better results for both hexane and ethyl acetate fractions.

About 2.3 g of ethyl acetate extract was purified using VLC and the fractions were dried in vacuo using a rotary evaporator. The fractions were again evaluated using ACE assay to determine which fraction contains the highest inhibitory activity and the results are shown in Figure 3. 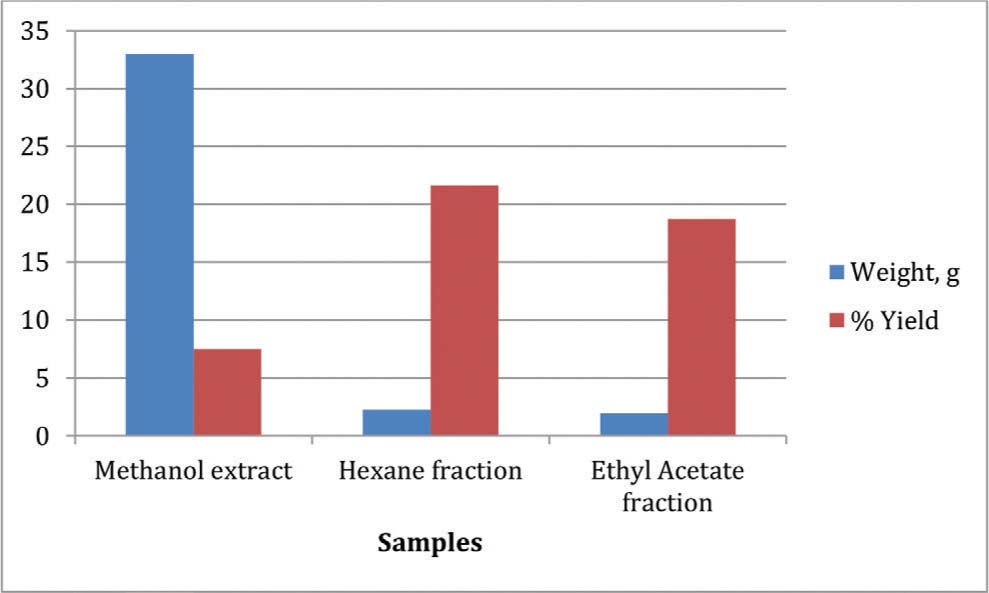 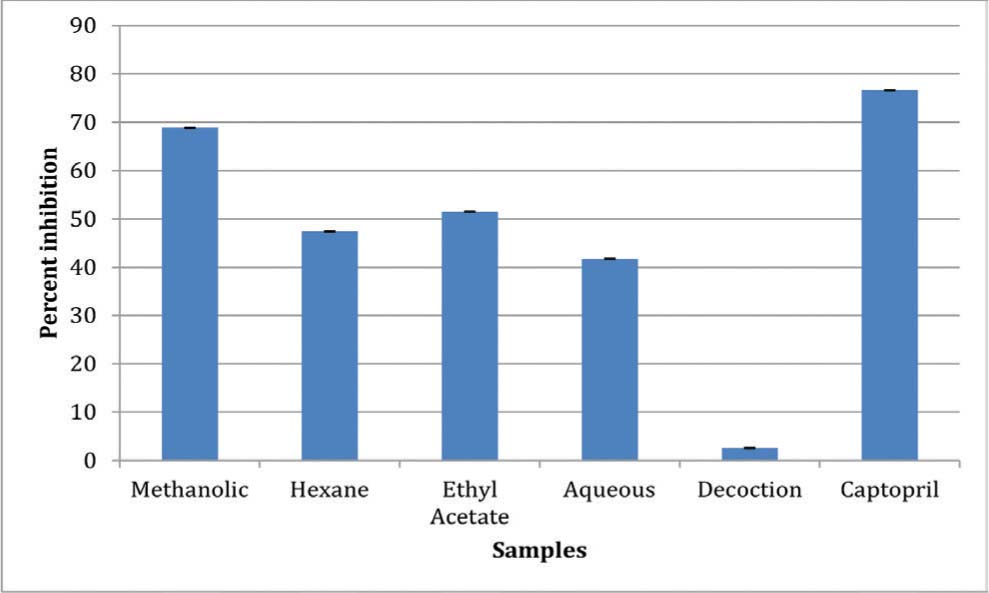 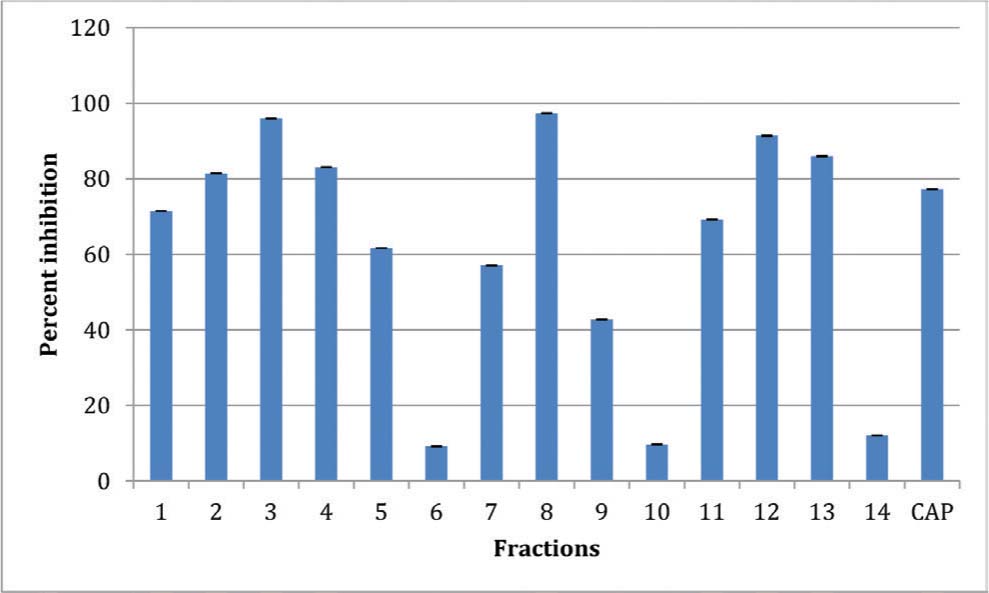 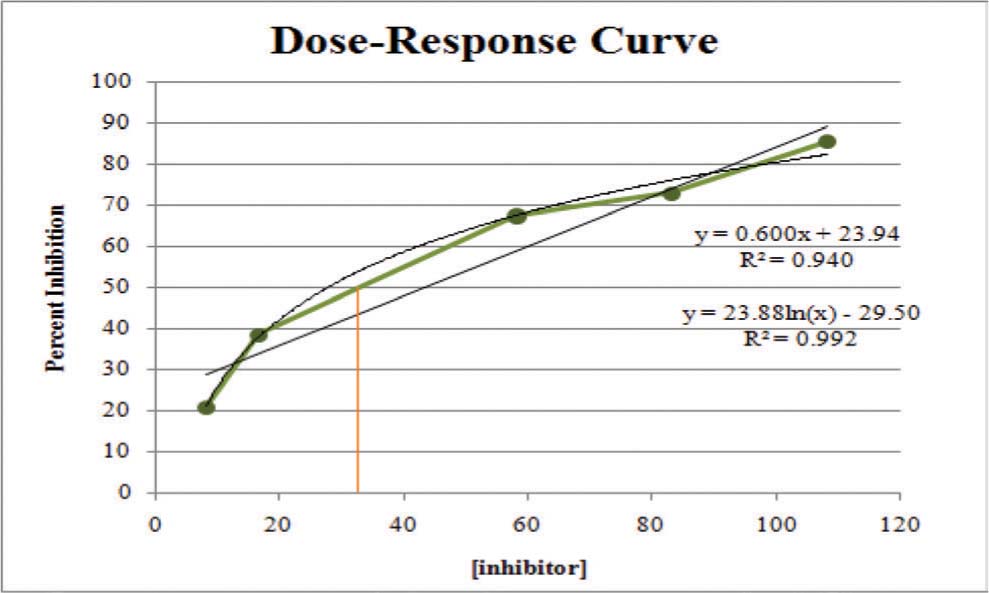 Some of the secondary metabolites that could be responsible for the observed in vitro ACE inhibitory activity are triterpenes, flavonoids, proanthocyanidins, and hydrolysable tannins.17 The results of the phytochemical screening in a study by Okokon et al.18 revealed the presence of alkaloids, terpenes, flavonoids, tannins, anthraquinones, saponins, and cardiac glycosides in E. indica extract.

There has been an established positive correlation between the consumption of foods and supplements rich in flavonoids and protection against cardiovascular diseases.16 The ability of flavonoids to modulate vascular function and blood pressure appear to be related with the action of nitric oxide. There are three parts in the active site of ACE: a carboxylate binding functionality such as guanidinium group of arginine, a sieve that accommodates a hydrophobic side chain of C- terminal amino acid residues and lastly, a zinc ion.16 The carbonyl of the penultimate peptide bond of the substrate coordinates to the zinc ion making it polarized and vulnerable to nucleophilic attack.16 Thus, flavonoids are able to inhibit the activity of ACE through generating chelate complexes within the active center of ACE. Just like flavonoids, proanthocyanidins contain properly positioned ligands are able to chelate the zinc on the active center of ACE.19

The preliminary evaluation of the crude extracts and fractions of E. indica showed that the plant is a potential source of bioactive compounds that can inhibit the activity of ACE. The ethyl acetate extract was found to have the highest ACE inhibitory activity. The anti-hypertensive activities of the different E. indica extracts and fractions observed in this study may have resulted from one of the mechanisms in inhibiting ACE activity as described above. Further purification studies will carried out to identify the bioactive compounds responsible for the observed activity. In vivo studies will also be done to further establish the anti-hypertensive effect of E. indica. 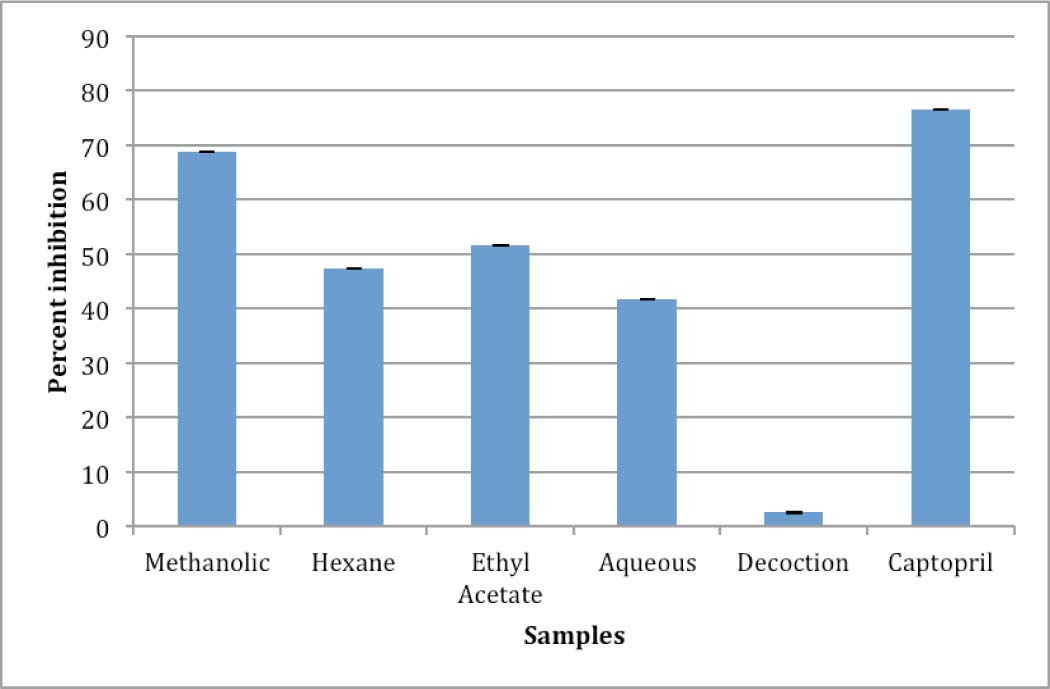 Department of Science and Technology through the Philippine Council for Health Research and Development. 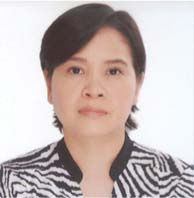 Christine L. Chichioco-Hernandez: Is an associate professor of the Institute of Chemistry, University of the Philippines Diliman, Quezon City working on the isolation and identification of bioactive compounds from terrestrial samples. 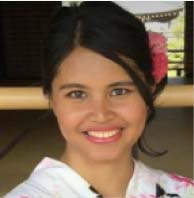 Jasmin T. Tutor: Is a graduate student and currently a science research specialist working at the Institute of Chemistry, University of the Philippines Diliman.

[1] Conflicts of interest CONFLICTING INTEREST The authors are declared no conflict of interest.