To study the distribution, traditional knowledge, dose and preparations, phytoconstituents, pharmacognostic characters and to correlate phytoconstituents and the claimed health benefits among the tribal people of Arunachal Pradesh if any, the present study was carried out.

Field survey and interview were used for ethnobotany and protocol given in Shah and Seth (2010), Kakote et. al.,(2012) and Wallis (2011) was followed to study pharmacognostic studies while GCMS was used in the studies of phytoconstituents.

This study reports numbers of volatile and non-volatile compounds from the rhizome of Coptis teeta with high percentage of berberine alkaloids. The study also reports alkaloid deposition at parenchymatous tissues and vascular tissues of rhizome. Phytoconstituents presents in the ethanolic extract of C.teeta cold be related to health problems and phytoconstituents as claimed by tribal people of Arunachal Pradesh.

Nature has endowed plant kingdom to the blue planet and plant is one among pre-requisite life supporting system. Plant provides almost everything that man needed and the environment around has been influencing the man’s culture since antiquity to make use of available resources around him. Therefore, Man must have learnt use of medicinal plant subject to the hungry, accident, injury, bite of insects or serpent or death of fellow men and made man’s instinct by luck or observation to get help from available surroundings 1 thus the importance of plants and animals was realized by the early men since the dawn of time. They started to use fruits, leaves and tubers for food and medicine. Such experiences became a knowledge system and assimilated as an integral part of man culture that passed down generation after generation and climaxed into traditional knowledge system.2 Therefore, Knowledge on the therapeutic and nutritional properties of medicinal herbs and food plants predated recorded history.3 Likewise, there are several historical indications that claim the ancient use of natural remedies to resolve primary health problems in different part of the world.1,4,5 In fact, traditional medicine practice is as old as mountains and hills in a tribal society where primary health care is totally based on traditional medicines.2 With the emerging worldwide interest in adopting and studying traditional systems and exploring their potential based on different health care systems, the evaluation of rich heritage of traditional medicine is essential.6

Moreover, in more recent past, the use of plants as medicines has involved the isolation of active compounds, beginning with the isolation of morphine from the opium in the early 19th century.7 Drug analysis from medicinal plants led to the isolation of important drugs like cocaine, codeine, digitoxin, and quinine.8

As cited above, Indigenous people of Arunachal Pradesh also has predated knowledge on medicinal plants and their uses. But no written records is exist in this part of territory however still exists in form of traditional knowledge and need to record before it is lost forever. It was the Britishers, who explored flora including their uses among aborigines of Arunachal Pradesh in late Nineteenth Century. Mishmi teeta is one among the herbal treasure grows in Arunachal Pradesh. Coptis teeta has been reported only from Indian Territory of Arunachal Pradesh and Yunnan province of China. This herb grows at the lower elevation limit of 1700 mts and upper elevation limit of 2800 mts. This herb is enlisted in Red List Category as endangered (A2cd ver 3.1) (IUCN Red List of threaneted species). The combined effects of unregulated collection and degradation of forest over the last decade years has resulted in decline of the population of over 60%. Therefore, the species has been assessed as Endangered. About 90% C. teeta population is in India, therefore considered representative of that of the global population.9

This herb was recorded as early as 1825 by R. Wilcox and Captain Bedford followed by Griffith in 1836 from Mishmi Hills of Indian flora. Mishmis and other tribes of Arunachal Pradesh used C. teeta to treat malaria, stomach ache and dysentery. The current rate of Coptis teeta is about Rs.2000/kg, it is found to be adulterated with the rootstock of Geranium wallichianum D. Don ex Sweet, root of Thalictrum filiolosum DC, roots of Swertia genus resembles the of rhizome of C. teeta.10

In the word of Philipson,11 herbal medicines are, of course, used for their reputed beneficial effects, however, scientific studies for validation are also important and Pharmacognosy is one of the basic methods to characterize and validate the drugs of natural origin to give correct and authentic identity. Plants provide a great challenge in metabolomics due to the rich chemical diversity of metabolites that they possess across a huge range of concentrations; estimates of 100000-200000 metabolites have been made for the plant kingdom,12 And Gas Chromatography–Mass Spectrometry (GC-MS) is a hyphenated analytical technique that combines the separation properties of gas-liquid chromatography with the detection feature of mass spectrometry to identify different substances within a test sample.13 Gas chromatography-mass spectrometry (GC-MS) is the most commonly used technique for the analysis of liposoluble constituents, especially volatile/semi-volatile compounds, and their metabolites in biological fluids due to its high resolution, selectivity and sensitivity.14 Hence, the present study has been taken up to study phytocompounds present in the Mishmi teeta by using GC-MS and pharmacognostic parameters of Coptis teeta.

Coptis teeta is a stem less herbaceous plant of Ranunculceae family, much used in Bengal and elsewhere as recorded by Kanjilal,15 the roots are gathered towards the end of the rainy season and are carried in tiny little wicker baskets to Sadiya where dealers from other provinces go to buy them.13 This herb is perennial herb, rhizomatous with densely fibrous roots, petiole is long, leaves are ovate – lanceolate, flowers are whitish yellow bloom in the month of Feb’- April and rhizome is golden in colour and bitter in taste Figure 1 and 2.

For pharmacognostic works, fresh rhizome was collected from Hawaii forest by Miss Amina Miso of BSc- Botany major Vth semester student of J.N.College, Pasighat. Characterization of pharmacognostic parameters were carried out by following methods given in Shah and Seth.16 Kakote et al.17Wallis.18

The dry rhizome of Coptis teeta was collected from Anini by Y. Jamoh Lego (a local healer) of Arunachal Pradesh. The sample was shade dried and pulverized to powder using a mechanical grinder. 500g of plant powder of the sample was soaked in ethanol for 72 h with intermittent shaking then filtered through Whit man No. 41 filter paper and concentrated under reduced pressure at 40°C using rotary evaporator to obtain a viscous semi solid mass/extract.

Gas-Chromatography Mass Specrometry (GC-MS) analysis of the ethanol extracts of Mussaendamacrophyllawas carried out in Shimadzu GCMS-QP-2010 plus system. RTx-5 Sil MS column (30 m × 0.25 mm id × 0.25 film thickness) was used for the analysis. The operating conditions of the column were as follows: 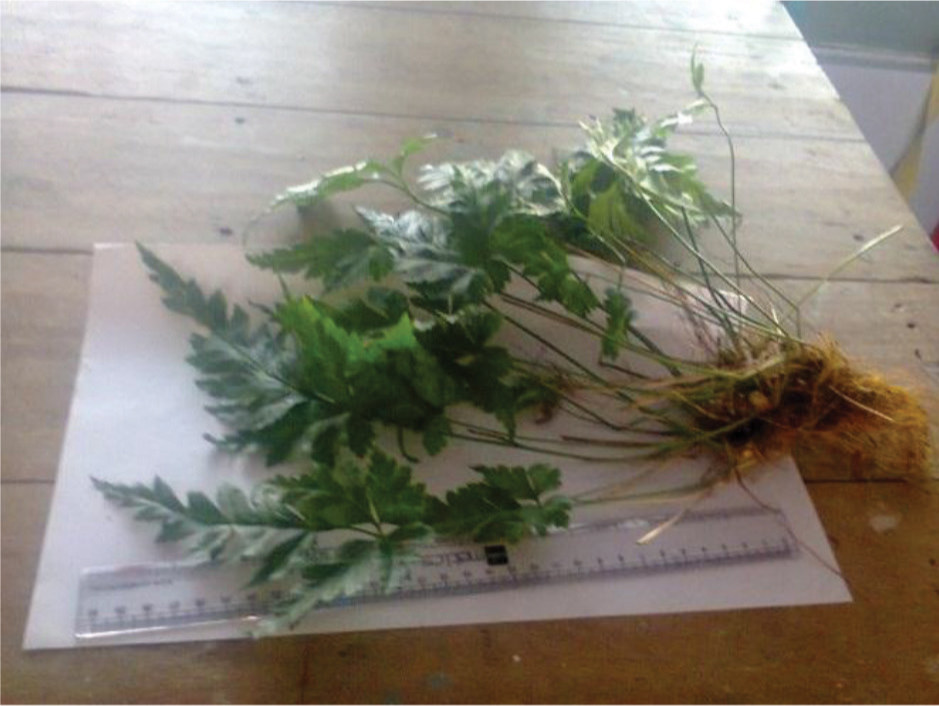 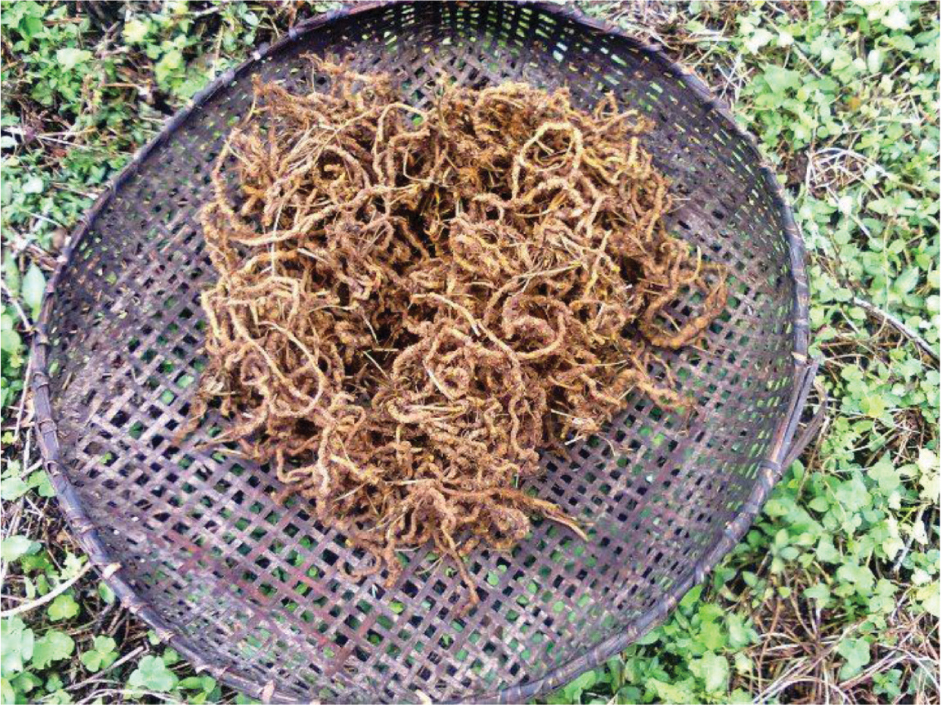 The identification of compounds was performed by comparing their mass spectra with data from NIST 11 (National Institute of Standards and Technology, US) and WILEY 8. 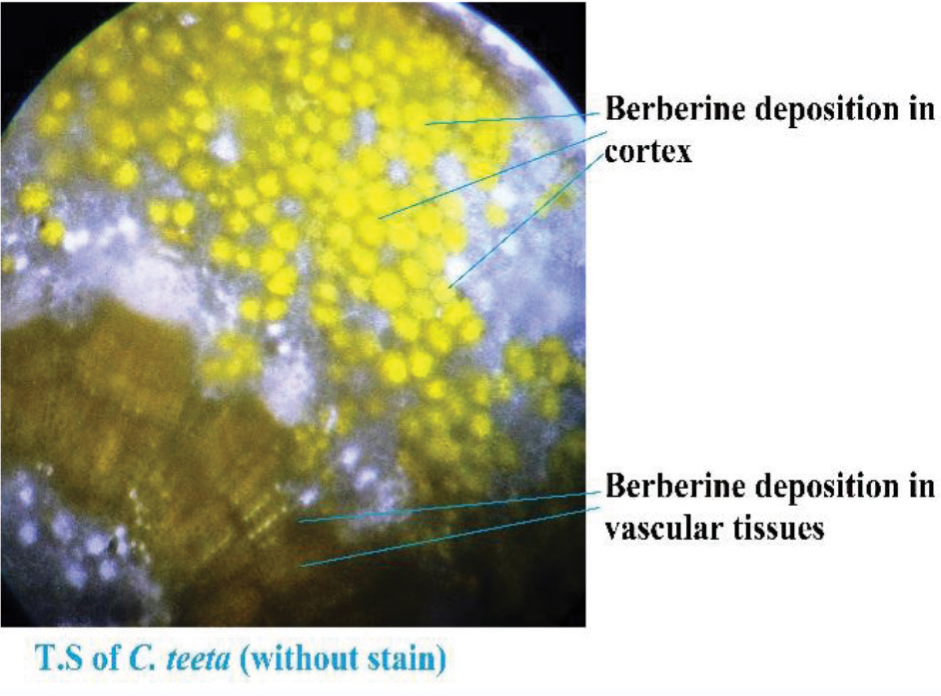 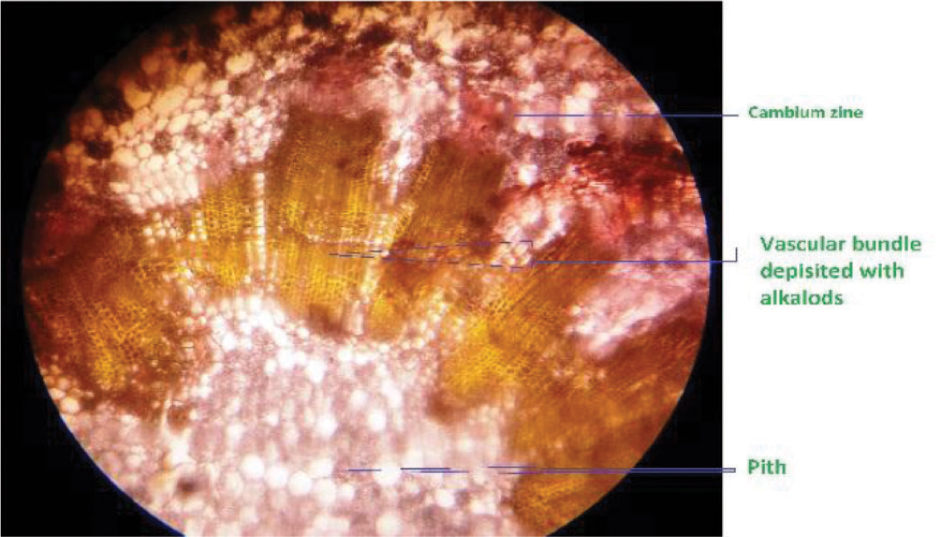 Mishmis and other tribes of Arunachal Pradesh use C.teeta in case of health problems like malaria, stomach ache, dysentery, Cold and Cough, Diarrhea, blood Dysentery, Typhoid, High blood pressure , Jaundice and to bring down body temperature during fever and also to relieve pain of eyes conjunctives. The rhizome is uprooted manually, hairs of rhizome are cleared, washed, sundried Figure 2 and grinded, soak in water then filtered and stored. In the word of Kanjilal and Borthakur.15 Rhizome were brought in tiny little wicker baskets to Sadiya (Assam) where dealers from other Provinces go to buy them. Mishmis bartered M. teeta for opium with Meyor, an ethnic Tibetan tribe, now Arunachali after 1988.19 They also brought the Yunnan Chinese silver.20 Idu mishmi (Chulikatiya maanu) exchanged daos, musks, ornaments and salt for Coptis teeta with Assamese.21 The open selling is illegal, but one can purchase at about Rs.2000/kg if source or seller can be located.

The rhizome is up rooted; the uprooted rhizome is washed thoroughly in running water and dried under the sunlight (in case of immediate need, dried over the fire place). Dried rhizomes are either cut into pieces or grinded into powder form. These pieces or powder is soak in water (cold/lukewarm) for at least 30 min or until the solution appears yellow. For faster result the latter is recommended. The best way to avail its benefit is to consume the decoction twice a day before food.

The rhizome is rough, live or fresh rhizome appears golden yellowish in colour while it looks brownish in dry; leaf scar is prominent and gives rhizome a rough and almost un-straight shape. Root stock profusely originate from the points where leaves developed and less profuse on underground rhizome part. The outermost surface of the transverse sectioned rhizome is covered with multi-layered cork upon cell wall; tissues are well differentiated into cortex, vascular bundles and pith. Alkaloids are chiefly deposited at cortex and Vascular bundles. Parenchymatous and conducting tissues are deposited with full of yellowish alkaloids while hardly any alkaloid deposition on pith Figure 3 and 4.

Coptis teeta is a an endemic and highly threatened medicinal plant, this herb is uprooted to collect the rhizome for medicinal purposes and put high pressure on their population, various methods to propagate shows partial success, protection and in situ conservation to increase population is important and further research on the line of pharmaceutical domain should be carried out to bring this useful herb to fight various health problems. 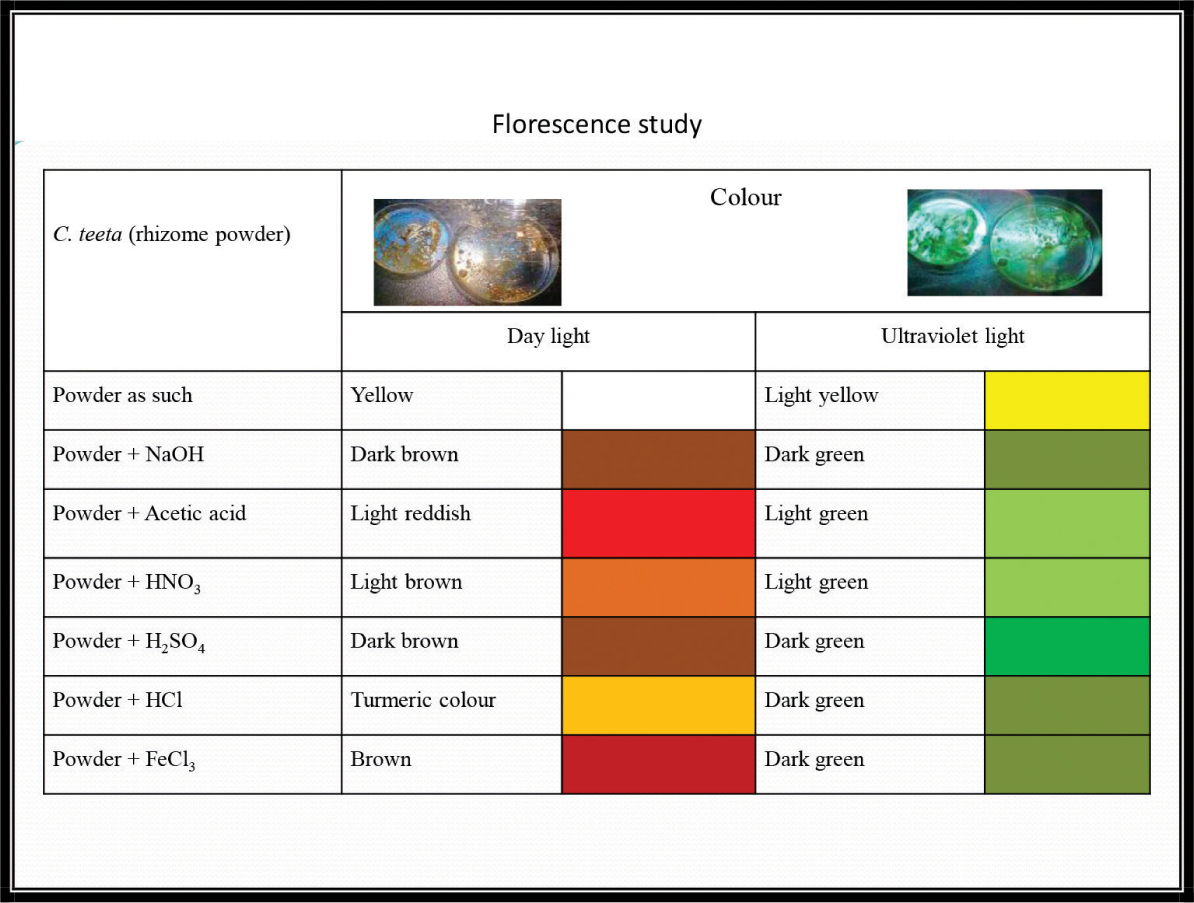 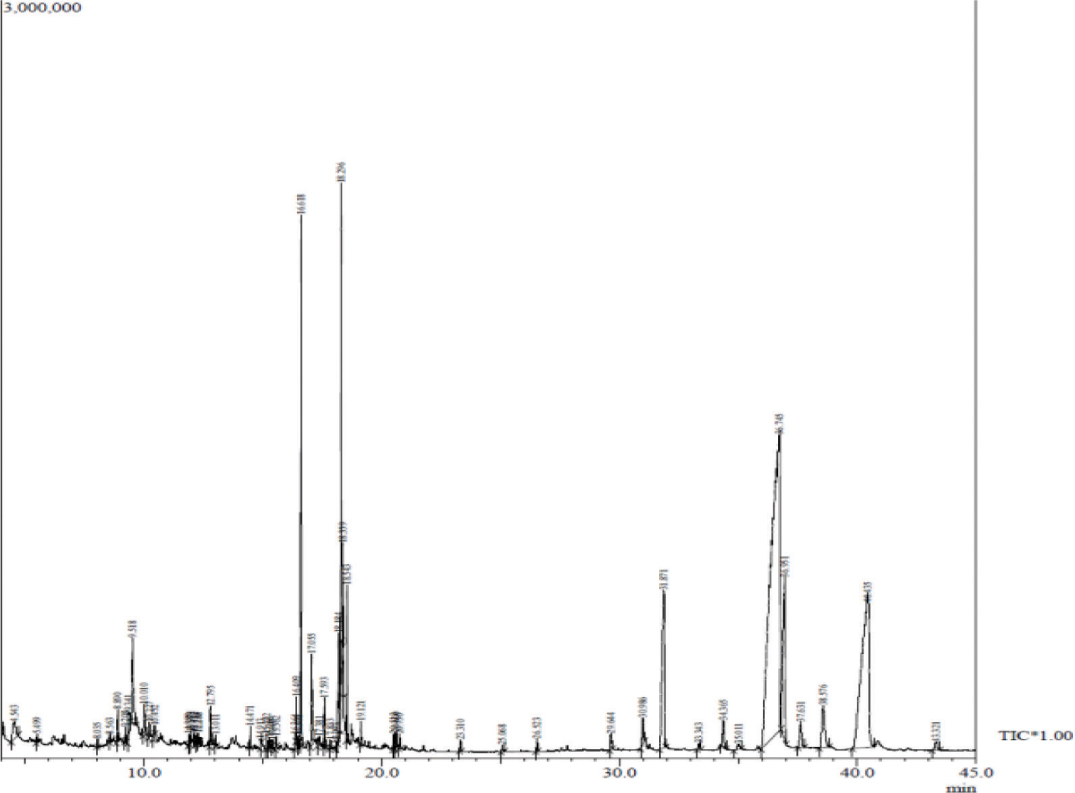 It is concluded that Coptis teeta is distributed in the eastern Himalayas and a highly threatened important medicinal plant. The study gives hints that Coptis teeta contain at least 56 compounds, out of which ten compounds are biologically active against numbers of health problems like anti-cancer and anti-diarrhea. It is important to make out that the traditional use among the tribal people of Arunachal Pradesh for various health problems like anti-diarrhea, stomach pain and to bring down the temperature of fever could be correlated with the reported compounds present and found in this study; 2-methoxy-4-venylphenol as Antitumour.22 Antimicrobial Anti-inflammatory23 likewise Methyl Streate has already been reported as antidiarrheal.25 Therefore, it is concluded that Coptis teeta need protection, propagation and further studies for the welfare of ecosystem and mankind. 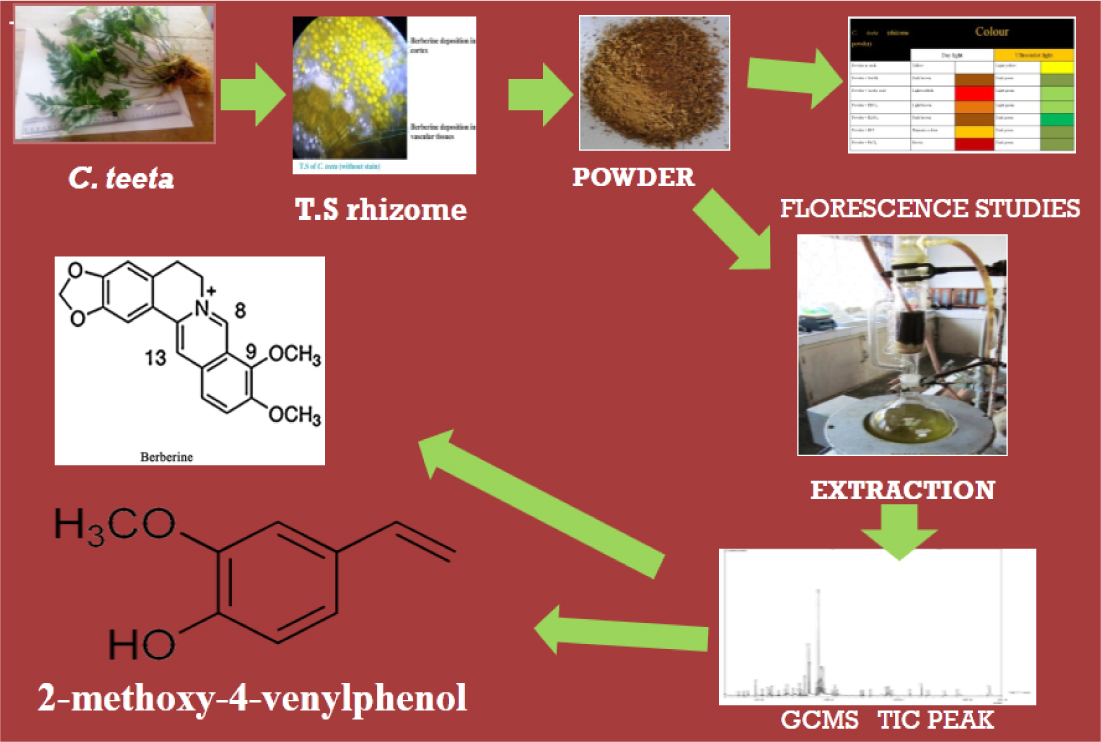 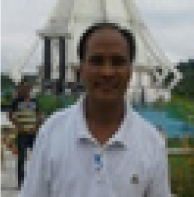 Gurib-Fakim A , author. Medicinal Plants: Traditions of yesterday and drugs of tomorrow. Molecular Aspects of Medicine. 2006;27(1):1–93