From the results showed the interactions between 1KDM protein with 47 phytocompounds, a natural compound chlorogenic acid showed the best glide docking XP score -7.255 kcal/mol and the binding energy value of -47.869 kcal/mol. Based on the result, the chlorogenic acid and target were run on MD simulations stable at 10 ns.

Finally, this study concludes the chlorogenic acid is a suitable drug candidate for infertility.

Infertility is a disease of the reproductive system which affects both men and women with practically parallel recurrence. It is a global phenomenon affecting an average of 10% of human reproductive age population.1 Male infertility is affecting one in six couple in common2 which interferes with the process of spermatogenesis and reduce sperm quality and quantity. Mostly, men are affecting this infertility disease due to coronary heart diseases, diabetes mellitus, chronic liver diseases, chronic smoking, and insufficient vitamins, few genetic factor intakes have been reported to cause deleterious effects on spermatogenesis.3 Androgens plays a central role in the maintenance of normal spermatogenesis, if androgen levels are decreased, infertility could ensue.

Gonadotropins [luteinizing hormone (LH) and follicle stimulating hormone (FSH)] secretion of estrogen reduces at pituitary level resulting in decreased testicular function and reduction in testosterone production and intratesticular and serum testosterone levels. The balance between serum androgen and estrogens is essential for normal semen parameters.4,5 There are few specify information about Sex hormone-binding globulin (SHBG) is a high molecular weight plasma protein that binds androgens and estrogens and plays a key role in maintaining the balance between unbound and bound sex steroids.6

If we consider deeper high -binding affinity, SHBG acts as a major part of steroids in the blood and any changes in SHBG levels effects the allocation and entrance of these molecules to target tissues. Besides natural steroid hormones such as dihydrotestosterone, testosterone, and estradiol, SHBG has also been shown to bind several EDCs including phthalates esters. Binding of the endocrine disrupting chemicals such as phthalate esters to SHBG in the body represents a potential way of interfering in the natural ligand and protein interactions and leads to harmful effect for the usual performance of the steroid target organs. Molecular modeling of zebra fish homolog of SHBG with several EDCs has been reported. In recent years, reported docking of many phthalates with androgen, progesterone, estrogen and peroxisome proliferating-activated receptors (PPARs). However, molecular modeling studies of phthalate esters with human SHBG are apparently not available. These are the information’s about the infertility disease.7,8,9

Molecular study was performed using different modules of Schrodinger.10 The schematic representation describes the work flow of the study Figure 1 followed by detailed description in the subsequent sections.

Protein X-ray crystal structures of SHBG was obtained from the Protein Data Bank after converted into PDB format with the help of Schrodinger software. The protein preparation is using by the tool of protein preparation wizard on Schrodinger suite. In general, protein is commonly occupied the water molecules. But, this process was evacuating those water molecules for increasing the entropy of target.34,35

Preprocessing and preparation of ligands

All the ligand molecules are prepared by the tool ligprep in Schrodinger.36 Later these ligand molecules optimized on various ionization states, tautomer, stereo chemistries and ring conformations to adding molecules. It was using ligand rotatable bonds can move freely on further process.37,38

The Maestro suite10 was used to perform molecular docking and utilized to prepare the input pdb file SHBG (PDB ID: 1KDM). Molecular docking uses the computational simultion predicts the ligand preferred orientation to a receptor when interact each other to form a higher stability complex. In this study Maestro 10.2 version tool was used to perform rigid flexible docking for predicting binding affinity, ligand efficiency and inhibitory constant. Glide Extra precision (XP) tool is used for the justification of suitable ligand molecule to the active site of specific target. The ligands being docked were kept flexible.39,40

MD simulation was performed using Macromodel Version9.0 (a Schrodinger module).41 The OPLS_2005 force field was used for the energy calculation. Constant temperature was 300 K and in the integration step 1.0 fs was given. Run the MD simulations for complex structure. MD simulation with position restraints was carried out for a period of 4000 PS to allow the accommodation of the water molecules in the system. Finally, Root Mean Square Deviation (RMSD) was calculated for checking the stability of 1KDM protein with their native motion. All the coordinate file was saved every 1000 ps upto 4 ns and the result was analyzed by Scatter Plot.42-44

The ligand binding energy of total 10 phytocompounds to inhibit SHBG was estimated using Prime MM-GBSA module in Schrodinger Suite 2014.45 The total free energy of binding, dGbind (kcal/mol) is estimated by the software as:

In this study, we intended to explore the overlaps SHBG inhibitory special effects of chlorogenic acid. In this protein sequence length is 177 amino acids and the resolution is 2.35 Å. These structures were to abolish water elements. A descriptive hydrogen atom was added to every inhibitor to assure that all of them were all-atom structures followed by energy minimization. After the protein preparation process is over, the protein is ready going with molecular docking. This molecular docking analysis has shown drug molecules potential and their hydrogen bond interaction where from the binding site of target. A total number of 10 natural compounds molecules in complex with SHBG protein were docked. Each ligand was docked with SHBG receptor that ligand molecules were produced docking score. The H-bond distance and their consequent glide energy were generated. And leading the docking score better drug for target molecules.50 Based on the research finding which molecule is placed leading docking score with the good binding affinities. We justified, it is a suitable ligand for target.

The results of our docking analysis, pertaining to each ligand is presented below. The docking scores and binding affinities are presented in Table 2.

Trifluridine had the second-best Glide G score (-5.417 kcal/mol) and binding affinity score (-46.574 kcal/mol). Analysis of the docked complex showed that the residues Trp 170 and Asp168 were involved in hydrogen bonding with Trifluridine Figure 2b.

Ellagic acid had the third best binding affinity score (-43.796 kcal/mol) with Glide G score of -4.805 kcal/mol. Analysis of the docked complex showed that the residues Ser 180 (2), Lys 173 and Asp 168 were involved in hydrogen bonding with Ellagic acid Figure 2c.

Kaempferol had the fourth best binding affinity score (-41.101 kcal/mol) with Glide G score of -4.456 kcal/mol. Analysis of the docked complex showed that the residues Trp 170 (2), Asp 168 and Ser 180 were involved in hydrogen bonding with Kaempferol Figure 2d.

Schematic representation of the docking procedure and analysis. 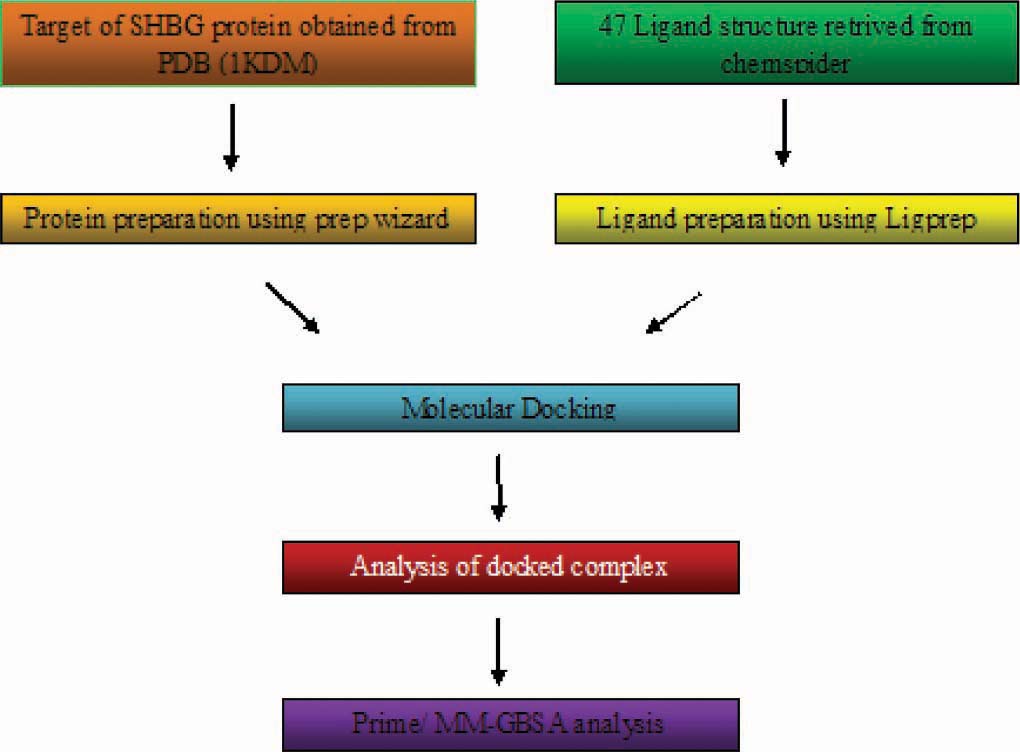 List of bioactive molecules and their source medicinal plants

[i] aResidues involved in the Docking against SHBG receptor {the distance between the amino acid and ligand are calculated in Angstrom (Å)}.

In the beginning stage of drug discovery physico-chemical indicators were used to find the vital properties affecting the biological functions (ADME) Table 3. There are some important measured physico-chemical properties such as permeability, solubility, lipophilicity, integrity and stability.52 But the concept of ADME has been expanded by toxicity.53 At the initial stage of drug discovery not only the several end points related to potential hazardous effects. Right from the beginning of disclosure strategy has been utilized to give a precise expectation of pharmacokinetic properties for moment ADMET.54

Similarly, Ishfaq et al.55 reported that the compound dimethyl phthalate is shown superior docking score with the target of SHBG. Earlier, many researchers have been analyzed this molecular docking to different disease-causing receptor proteins to predicting various bioactive molecules respectively56,57. End of the outcome validation all the phytocompounds were validated by the binding mode of the target. The suitable ligand molecules have filtered based on the binding affinities of ligand to target amino acid residues. Binding affinities shows the contribution of ligand from target and strongly rely on the flexibility of receptor.

The root mean square deviation (RMSD) is used to measure the average change in displacement of a selection of atoms for a particular frame with respect to a reference frame. It is calculated for all frame in the trajectories. 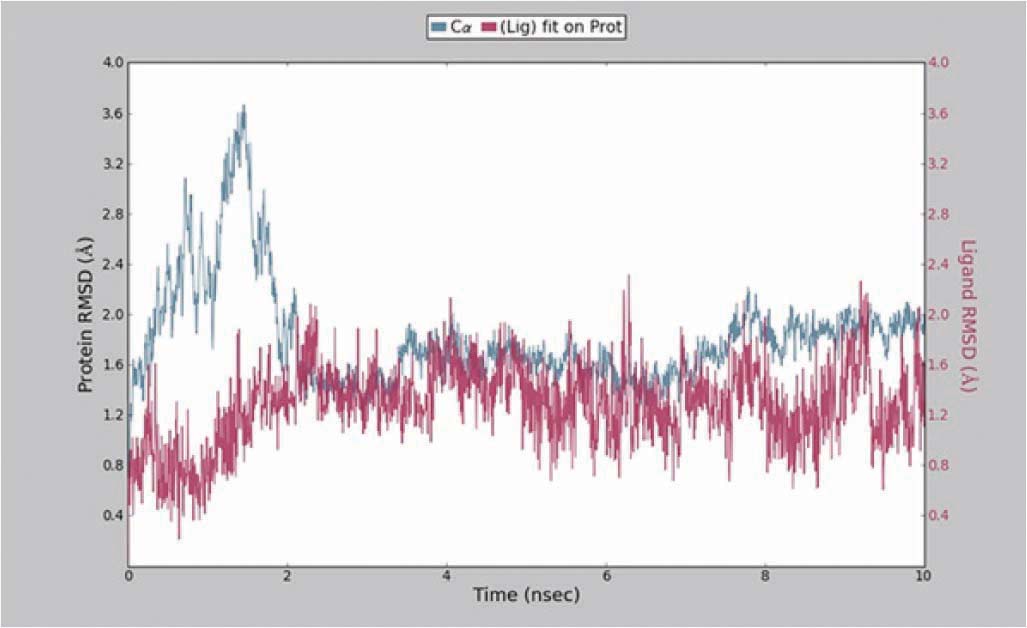 As a result of this computational experiment Phytocompound of the Chlorogenic acid has shown efficient docking score and effective binding affinities. Hence, we concluded that the chlorogenic acid may be a suitable potential to the SHBG stimulation. Based on this finding, we suggested that chlorogenic acid bioactive molecule used for further drug development process. And, this study will be addressed to further drug processing analysis. 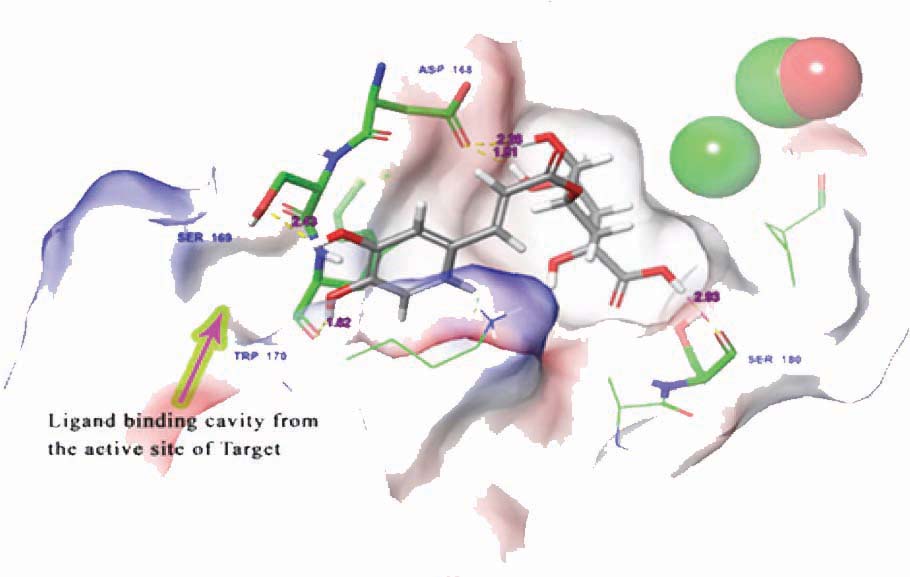 The authors are grateful to the DST-SERB (SB/YS/LS-109/2014) for providing financial assistance for this project. We specially express our thanks to the management of A.V.V.M. Sri Pushpam College (Autonomous), Poondi, for providing us necessary facilities and for supporting us to carry out this work 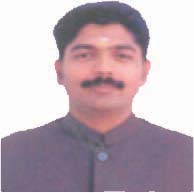 Dr. S. Vijayakumar has received his doctorate degree from Barathidhasan University and has more than 15years of teaching experience at U.G. and P.G. levels. He has 15 years of research experience. He is workingas Assistant Professor in the Department of Botany and Microbiology, A.V.V.M. Sri Pushpam College (Autonomous),Poondi-613 503, Thanjavur district, Tamil Nadu. He has got vast experience in research especially oncyanobacteria, Medicinal plants, Environmental Microbiology and Computer Aided Drug Design (CADD). He has guided P.G. students for their projects in the field of fresh water Algae, Medicinal plants and Bioremediation. At present he is completed 10 Ph.D and guiding 8 Ph.D. programme in this line. So, far he has guided 22 M. Phil.,candidate for their degree and published 68 research papers in the SCI journals. He has got best paper award from National Symposium on “Algae, Man and Biosphere” and International Medicinal Plants and Pharmacological Research, Columbo University, Srilanka. Recently, he got YOUNG SCIENTIST AWARD from Wasinghton University, USA. He has visited more than 8 countries which include Spain, Dubai, Sri Lanka, Singapore,etc. He also completed One UGC Minor and UGC Major Project. Right now one DST-SERB major projectis ongoing in the area of Computer Aided Drug Design and Modelling. 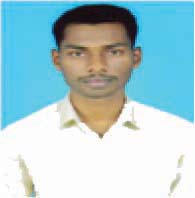 Mr. J.E.Morvinyabesh has received his under and post graduation in Botany from A.V.V.M. Sri Pushpam College. Presently, he is studying Doctor of Philosophy in Department of Botany and Microbiology at same institution under the supervision of corresponding author of this paper. Currently, he is studying about Venereal diseases and those diseases causing opportunistic pathogens. He is seeking drug efficient having medicinal plants and their bioactive molecules for curing those venereal diseases. He has also handled some advanced computational tools for identify new drug candidate.

Journal:
Pharmacognosy Journal
‹ Distribution, Ethnobotany, Pharmacognosy and Phytoconstituents of <italic>Coptis teeta</italic> Wall.: A Highly Valued and Threatened Medicinal Plant of Eastern Himalayas up Isolation, Purification of Quercetin from <italic>in vitro</italic> Cell Suspension Culture of <italic>Caesalpinia pulcherrima</italic> and its Analysis by HPLC-DAD and NMR ›