Phytochemical Screening and Antimicrobial Activity of Rhizomes of Hedychium spicatum

Arora and Mazumder: Phytochemical Screening and Antimicrobial Activity of Rhizomes of Hedychium spicatum

The use of and search for drugs and dietary supplements derived from plants have accelerated in recent years.

In this study the rhizomes of Hedychium spicatum (Zingiberaceae) were evaluated for phytochemical parameters & antimicrobial activity by determining its MIC (by checker board method) and zone of inhibition (by cup plate method). Phytochemical parameters were studied with the aim of drawing the pharmacopoeial standards for this species. This study was also designed to evaluate the antimicrobial efficacy of the methanolic extract of the rhizomes of H. spicatum against various diarrhea and dysentery causing drug resistant microorganisms isolated from patients admitted in hospitals.

It was evident from the results that the extract was highly active against Shigella boydii, Shigella. Soneii, Shigella flexneri, B. cereus, Vibrio cholera, E. coli, S. aureus, Ps. aeruginosa and K. pneumoniae. The result of determination of zone of inhibition was compared with that of standard drug (Ciprofloxacin). This study has pointed to the potential application of H. spicatum as a bactericide and fungicide.

The findings of this study further reinforces the importance of H. spicatum rhizomes in traditional healthcare practice and its use in culinary. Further investigation is however needed to isolate and purify the bioactive antimicrobial principles for potential development into generic antimicrobials.

H. spicatum (Ham-ex-Smith) is a perennial rhizomatous herb belonging to the family Zingiberaceae. It grows throughout the subtropical Himalaya in the Indian state of Assam, Arunachal Pradesh and Uttarakhand within an altitudinal range of 1000–3000 m.1,2 H. spicatum rhizome is mentioned as Shati in Ayurvedic classics and has been used in various dosage forms to treat cough, wound ulcer, fever, respiratory problems and hiccough. The rhizomes have a strong aromatic odor and bitter taste. In local language, the rhizomes are commonly known as kapur kachari or ban Haldi.3 Rhizomes are also used as perfume in tobacco and insect repellent. The rhizome extract has been reported to contain essential oil, starch, resins, organic acids, glycosides, albumen and saccharides, which has been advocated for blood purification and treatments of bronchitis, indigestion, eye disease and inflammations.4,5 Rhizome is reported to contain sitosterol and its glucosides, furanoid diterpene-hedychenone and 7-hydroxyhedychenone and essential oil contains cineole, terpinene, limonene, phellandrene, p-cymene, linalool and terpeneol. The plant rhizomes possess hypoglycemic, vasodialator, spasmolytic, hypotensive, antioxidant properties.6 Powdered rhizome of H. spicatumhas been used clinically for the treatment of asthma7 and tropical pulmonary eosinophilia 8 and as anti-inflammatory and analgesic.9

The raw materials of H. spicatum were procured from the supplier (S.S. Herbal, 485/2, Katra Ishwar Bhavan, Khari Baoli, Delhi) and the sample was identified and authenticated. 100 gm of air dried powdered plant material was extracted with methanol in soxlet apparatus for 96 hrs. After that the extract was filtered and again suspended in the above mixture for 24 hrs. Finally extracts was filtered and concentrated over water bath at a temperature of 40ºC. The extract was cooled and kept in desiccator overnight. The extracts was weighed and used for antibacterial and antifungal potentiality.

All parameters were applied on rhizome physicochemical analysis i.e., percentage of ash values and extractive values, were performed according to the official methods prescribed in Indian Pharmacopoeia, 1996 and the WHO guidelines on quality control methods for medicinal plant materials (WHO/QCMMPM guidelines).10

The rhizome extract (stock solution) was reconstituted with a minimum amount of dimethyl sulfoxide (DMSO). This solvent did not possess any antimicrobial activity of its own. Calculated volumes of this stock solution were dispensed in a series of McCartney bottles previously containing calculated volume of sterile cooled molten nutrient agar media (40-45ºC) to prepare final volume of 30 ml each with dilutions of 5, 10, 25, 50, 100, 200, 400, 800 and1000 μg/ml. The stock solution were dispensed into molten SDA to prepare varying dilutions of 100, 200, 400, 800, 1500 and 2000 μg/ml while determining the MIC against the fungi. Then these molten media containing varying concentration of extract were poured aseptically in pre-sterilized Petri dishes (70 mm) to give sterile nutrient agar plates with varying dilution of extract. These plates were then kept in refrigerator at 4ºC for 24hrs to ensure uniform diffusion of the extract. Then these plates were dried at 37ºC for bacteria and 25ºC for fungi for 2 hours before spot inoculations. One loopful (loop diameter: 3mm) of an overnight grown bacterial strain suspension (105 CFU/ml) was added in each quadrant as marked by checker board technique. The spotted plates were incubated at 37ºC and 25ºC for 24 hours for bacteria and fungi respectively, in an incubator and MIC values were obtained.13,14,15

Determination of Mode of Action of the Extract

To determine whether the extract was bacteriostatic or fungistatic and bactericidal or fungicidal in nature, plugs from the zone of inhibition were taken out and reincubated into fresh media which were then examined for their growth after 96 hours incubation at 37ºC and 25ºC in an incubator, respectively.15,16

Ash value of a drug gives an idea of the earthy matter or the inorganic composition and other impurities present along with the drug. Extractive values are primarily useful for the determination of exhausted or adulterated drugs. The alcohol soluble extractive was high in rhizomes of H. spicatum. The results of physicochemical constants of the drug powder are presented in (Table 1).

Preliminary phytochemical screening of the extract revealed the presence of tannins, saponins, flavonoids, steroids, terpenoids, cardiac glycosides and reducing sugar in it (Table 2).

Determination of MIC of the rhizomes extracts of H. spicatum against different bacterial strains:

Determination of diameter of zone of inhibition (in mm) produced by the methanolic extract of the rhizomes of H. spicatum and its comparison with that of Ciprofloxacin against selected sensitive bacterial strains*

The result in Table 3 depicted the MIC values of the methanolic extract of the rhizomes of H. spicatum against various tested bacterial pathogens.

It was evident from the results shown in the Table 3 that the extract was highly active against Shigella boydii, Sh. soneii, Shigella flexneri, B. cereus, Vibrio cholera, E. coli, S. aureus, Ps. aeruginosa and K. pneumoniae. The result of determination of zone of inhibition of the crude extract of the rhizomes of the plant and their comparison with those of standard antibacterial agent Ciprofloxacin against the tested bacterial strains is recorded in Table 4.

The pharmacognostical and phytochemical evaluation of H. spicatum (Zingiberaceae)) rhizome provided useful information for identification and authentication of the plant. The antibacterial study of the methanolic extract of the rhizomes of H. spicatum showed the maximum activity against Shigella boydii, Sh. soneii, Shigella flexneri, B. cereus, Vibrio cholera, E. coli, S. aureus, Ps. aeruginosa and K. pneumoniae. The results of phytochemical analysis and antimicrobial activity studies of the plants extracts confirmed its therapeutic usage, as depicted in the literature. The active plant extract may be further subjected to biological and pharmacological investigations for isolation of antibacterial and therapeutic compounds. 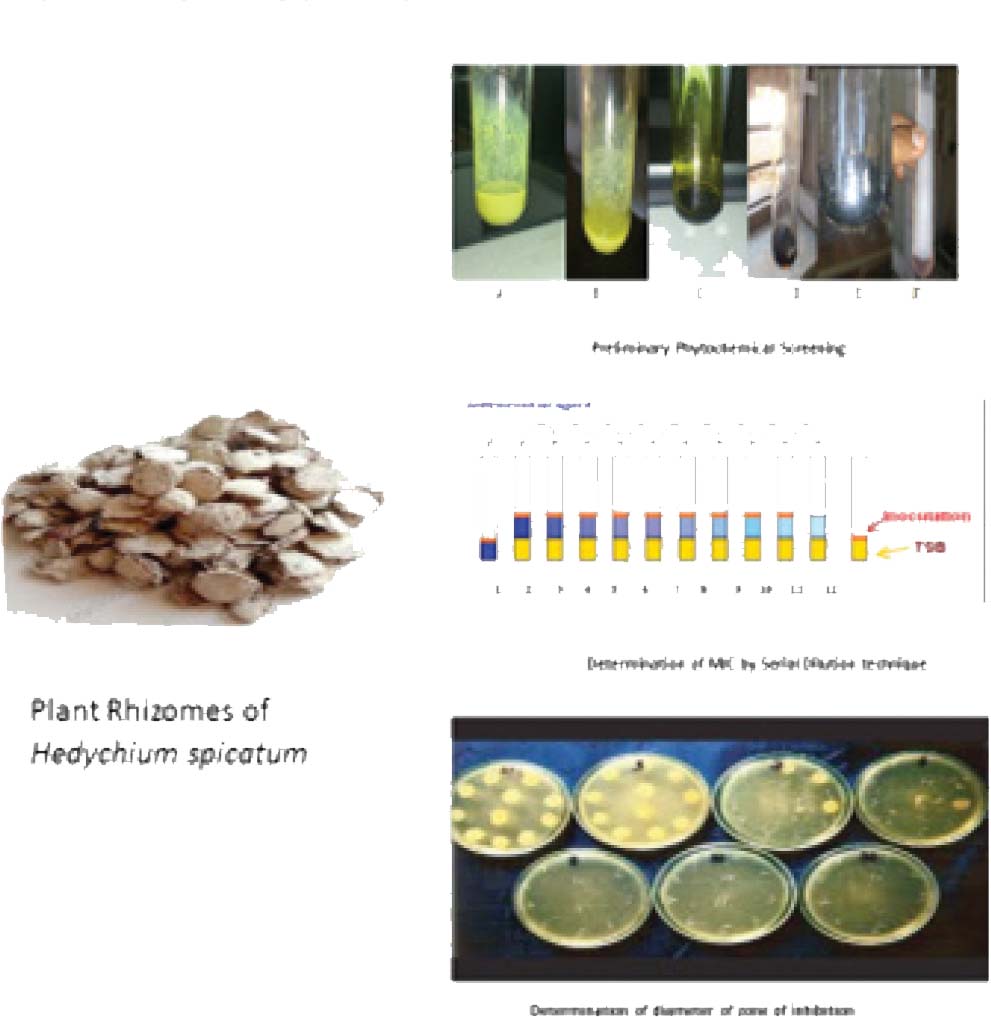 The authors are grateful to extend special thanks to Dr. G. S. Chakraborthy, Pharmacy Institute Noida Institute of Engineering and Technology, Greater Noida, for his constant encouragement & support throughout the work.

Ritu Arora: Is a Research Scholar at Dr. Abdul Kalam University, Lucknow. Her research is focused on Phytochemical analysis of plants and herbal products, pharmacological screening of plant and plant products.

Dr Avijit Mazumder: Is working as Professor and Director in the NIET Pharmacy Institute in Noida Institute of Engineering and Technology since October 2009. He had a total of more than one hundred eighty national and international publications to his credit. He had contributed eight book chapters and is the author of three books of repute.

[2] Conflicts of interest CONFLICTING INTEREST The authors are declared no conflict of interest.