The dried and pulverized fruit materials were extracted with n-hexane for 6-8 h. The phytochemical constituents were analysed by GC-MS.

Totally 23 bioactive compounds were identified with RI and SI factors. Of the twenty-three compounds detected from n-hexane extract, Tetradecane (27.87%), Hexadecane (27.26%), Nonadecane (22.25%) and Pentacosane (8.13%) were detected as major compounds.

The obtained bioactive compounds were reported as potentially active in various medicinal treatments and can be used for the treatment of various diseases.

Trichopus zeylanicus ssp. travancoricus Burkill ex K. Narayanan is a rhizomatous herb belongs to the family Dioscoreaceae locally known as Arogyapachai (Tamil) and Arogyapacha (Malayalam) and literally known as the green that gives strength. In India, the species have reported as endemic to the Southern Western Ghats with a restricted distribution in Agasthyamalai Biosphere Reserve. It is reported as one of the important ethnomedicinal plants which grow near to the wet banks of streams and rivulets of the dense forests. The Kani tribe of Agasthyamalai has contributed to bring the multifarious uses of this wild plant to the present medical world. They also claim that to remain healthy, agile, young and resistant to the various diseases on infections, one should consume the fresh fruits of Aroghyapacha regularly.1 According to ethnobotanical knowledge, the unripened fruits are immersed in honey for ten days and then taken internally to get relief from asthma and the powder of leaves of T. zeylanicus ssp. travancoricus along with stem bark of Mangifera indica has taken orally to treat venereal diseases.2 The powder of whole plant of Diospyros ebenum has taken along with the leaves and fruits of Trichopus zeylanicus, rhizome of Curculigo orchioides and fruits of Phyllanthus emblica, Terminalia bellirica and honey to strengthen the body and these combinations of herbals contains phytochemical constituents such as ceryl alcohol, lupeol, betulin, sitosterol, diospyric acid, triterpene and carboxylic acid.3 Arogyapachhai also possess several pharmacological activities and medicinal properties such as choleretic, aphrodisiac, hepatoprotective, mast cell stabilization.4,5,6 adaptogenic,7 cardioprotective,8 anxiolytic and antidepressant activity, hepatoprotective activity, immunomodulatory activity and anti-ulcer activity.9,10,11 The phytochemical studies have found that, the seeds and leaves extracts were reported with rich in saponins. The chemical investigations showed that, the leaf contains flavonoid glycosides, glycolipids and some other non-steroidal compounds.12 The chemical investigation of aerial parts of T. zeylanicus ssp. travancoricus resulted in the isolation and characterization of five compounds namely, 6-acetyl-7-hydroxy, 8-methoxy-2,2- dimethyl-3,4-dihydro-1H-1-benzopyran, β-sitosterol, Triacontanol, apigenin-8-C glucoside (vitexin) and apigenin-6,8-di-C glucoside (Vicenin-2).13

The fruits of T. zeylanicus ssp. travancoricus were collected from Agasthyamalai Biosphere Reserve, India. The specimens collected from the forest areas were identified with the standard literature and authenticated with valid voucher specimens. The voucher specimen of T. zeylanicus ssp. travancoricus (GU 511) was submitted in the Herbarium of Department of Biology, The Gandhigram Rural Institute – Deemed University, India.

The shade dried and coarsely powdered fruit of T. zeylanicus ssp. travancoricus was extracted with n-hexane by using soxhlet apparatus for 6-8 h. The extract was filtered through Whatman No. 1 filter paper and concentrated in vacuum rotary evaporator to get a constant weight and stored at 4°C dark place prior to analysis. The n-hexane extract of the fruit was used for GC-MS analysis.

Gas chromatography combined with mass spectroscopy is a preferable for analysis of compounds. n-hexane extract was performed using a Shimadzu GC-MS QP 2010 Ultra model and Gas Chromatograph interfaced to a mass spectrometer (GC-MS) equipped with a Rxi-5Sil MS, fused silica capillary column (30 m × 0.25 mm ID × 1× df, composed of 100% Dimethyl polysiloxane). For GC/MS detection, an electron ionization system with ionizing energy of 70 eV was used. Helium gas (99.999%) was used as the carrier gas at constant flow rate 1 ml/min and an injection volume of 1 μl was employed (Split ratio of 50:1) injector temperature 250°C; ion-source temperature 280°C. The oven temperature was programmed from 100°C (isothermal for 2 min) with an increase of 5°C/min to 2000°C, then 10°C/min to 280°C, ending with a 2-min isothermal at 280°C. Mass spectra were taken at 70eV; a scan interval of 0.3 sec and fragments from 40 to 800 Da. Total GC running time was 32 min. Software adopted to handle mass spectra and chromatograms was a Lab Solutions.

The components of the extracts were identified by the calculation of their retention indices (RI) under temperature- programmed conditions for n-alkanes (C7 to C33). The identification of individual compounds was made by comparison of their relative retention time and their identity was confirmed by comparing the mass spectra with the database from the Library of National Institute of Standard and Technology 11 and Wiley8.

The n-hexane extract was obtained from fruits of T. zeylanicus ssp. travancoricus through soxhlet method and the chemical composition of the extract was analysed using GC-MS. The fruits of T. zeylanicus ssp. travancoricus afforded brownish-yellow coloured semi solid mass (3.7%). Through GC-MS, a total of twenty-three compounds were detected and depicted in Table 1. All the twenty-three compounds were identified by comparison with the authentic spectra obtained from GC-MS library (NIST - 11 and WILEY 8) with SI factor. Of the twenty-three compounds identified from n-hexane extract of fruit, Tetradecane (27.87%) was found as a major compound which is an acyclic alkane hydrocarbon with 1858 structural isomers (CH3(CH2)12CH3). The second major compound was detected as Hexadecane (27.26%) is an alkane hydrocarbon reported from the extract of the fruit with the chemical formula C16H34 Figure 1. Tetradecane have antimicrobial, wound healing, antiviral and anti-tumour properties whereas Hexadecane possess antibacterial and antioxidant activities.14 The third major chemical constituent was Nonadecane (CH3(CH2)17CH3) which comes under the saturated aliphatic hydrocarbon which occupied 22.25% of the total extract. The other compounds viz. Pentacosane (8.13%), 2,6-dimethyl decane (2.19%), Undecane, 3-methyl- (1.48%), 5-Methyltetradecane (1.30%), Hexadecane (1.18%), Tetratetracontane (1.17%), 2-bromo dodecane (1.13%), Decane, 5,6-dipropyl- (0.92%), Nonadecane, 9-methyl- (0.92%), Pentadecane, 8-hexyl- (0.82%), 9-methylheptadecane (0. 78 %), Dodecane (0.40 %), Heneicosane (0.40%), Hexacosane (0.30%), Pentadecane, 7-methyl- (0.28 %), Eicosane, 10-methyl- (0.28%), Heptadecane, 7-methyl- (0.26%), Tritetracontane (0.25%), Dibutyl phthalate (0.22%) and Heptadecane, 2,6,10,15-tetramethyl - (0.22%) were found as a meagre amount in the fruit extract.Huang et al.15 stated that, n-dodecane, tetradecane, heptadecane, octadecane and dibutyl phthalate are generally considered to smell faint. The plant has the promising bioactive compounds which are helpful in the production of novel pharmaceuticals and in addition a nutraceutical. It is beneficial to further separate the compounds and determine their specific activity and to understand the synergistic impact of compounds for their therapeutic roles.

In the present investigation, twenty-three chemical constituents have been identified from n-hexane extract of the fruit of T. zeylanicus ssp. travancoricus by Gas Chromatogram Mass Spectrometry (GC-MS) analysis. The presence of various phytochemicals contributes to the various bioactive compounds have different medicinal properties which can be useful for the treatment of several diseases. 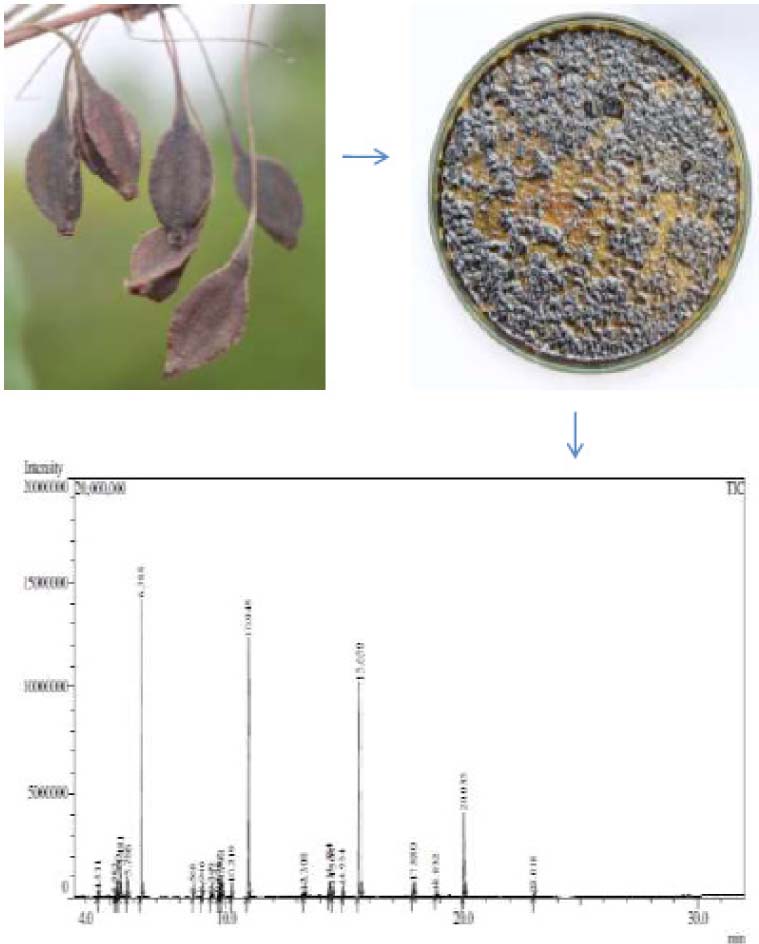 We thank Department of Science and Technology, New Delhi for providing fund under INSPIRE Fellowship Programme (IF140173) to carry out research.

Journal:
Pharmacognosy Journal
‹ Formulation Development and Evaluation of Anti-inflammatory Potential of <italic>Cordia obliqua</italic> Topical Gel on Animal Model up Pharmacognostic Evaluation and Determination of Secondary Plant Metabolites by HPTLC and its Antioxidant Activity in <italic>Myrica esculenta</italic> ›