Gaylan, Estebal, Tantengco, and Ragragio: Anti-Staphylococcal and Antioxidant Properties of Crude Ethanolic Extracts of Macrofungi Collected from the Philippines

Kirby-Bauer disk diffusion assay and broth microdilution method were used to screen for the antibacterial activity and DPPH scavenging assay for the determination of antioxidant activity.

Based on the results, these Philippine macrofungi showed antistaphylococcal activity independent of the antioxidant activity. These can be further studied as potential sources of antibacterial and antioxidant compounds.

Macrofungi have been used for a long time in traditional medicine especially in Asian countries.1 This indicated the potential presence of mycochemicals that are responsible for the health benefits of macrofungi. It has been previously reported that constituent compounds of macrofungi have cytotoxic, antinociceptic, and immunomodulatory properties.2,3,4

The mushroom species were collected from three sites Sitio Pastolan, Hermosa from July to December of 2016. The map coordinate of the study site is 14°50’26.29”N and 120°20’47.17”E. Collected macrofungi were wrapped in newspaper. Each were labeled accordingly and voucher specimen were submitted to the National Museum of the Philippines for taxonomic identification.

Macrofungi were weighed separately using a top-loading balance. They were dried in the oven overnight at 40°C and were air-dried after for seven days. They were washed with distilled water and cut into small pieces. About 150 grams of each macrofungus were soaked in 500 mL of 95% ethanol for five days. Filtration was done using Whatman filter paper No. 1. The supernatant was concentrated by a rotary evaporator at 40°C. Stock solutions were prepared by dissolving the dried extracts in 1% DMSO to a concentration of 100mg/mL after collection. The extracts were stored at 4°C for subsequent use.

Staphylococcus aureus (ATCC 25923) was retrieved from the Department of Medical Microbiology, College of Public Health in the University of the Philippines Manila.

A 24 h culture of S. aureus was prepared prior to the methods of disk diffusion assay. It was inoculated in sterile Brain Heart Infusion broth with the turbidity adjusted to 0.5 McFarland standard of approximately 1.5×108 CFU/mL. A volume of the inoculum was swabbed on Mueller-Hinton agar plate using a sterile cotton swab within 15 minutes after standardization. Twenty microliters (20μL) of the crude ethanolic macrofungal extract were loaded on sterile 6 mm paper disks and were placed on the agar plates. Ciprofloxacin (5 μg) was used as the positive control while 95% ethanol and 1% DMSO were used as negative controls. Incubation of the plates were done at 35±2°C for 16 to 24 h. The setup was done in triplicates and the diameters of zone of inhibition were measured in millimeters using a Vernier caliper.

The inoculum was prepared as described in the Kirby-Bauer disk diffusion method. A 1:20 dilution of the suspension was made using MHB as the diluent. Ten microliters (10μL) of the inoculum was added to each of the wells. Media were mixed and the trays were incubated at 35±2°C for 16 to 24 h. Reading of absorbance values was done using the ELISA micro plate reader. Controls include a reference drug control and a negative control blank containing no bacterial inoculum. Extracts with 1% DMSO, 95% ethanol and MHB were also used as controls. Determining the MIC50 required the use of the formula:

Four hundred micrograms (400 μg) of the dried extracts was weighed using an analytical balance and was dissolved in 1mL of 95% ethanol in a microcentrifuge tube. Two hundred microliters (200μL) of the extract was added to the first lane of the 96-wells microplate with 100μL of 95% ethanol in the succeeding lanes. Two-fold dilution was done using a multichannel pipette discarding the last 100μL from the last lane. Addition of 100 μL of 0.2 mM DPPH radical was done to each well producing a range of concentration from 200 μg/mL to 0.1 μg/mL of the extract. Blank controls were also done. The mixture was shaken using a vortex mixer for 30 minutes before subjecting to the spectrophotometer set at 515 nm for absorbance readings. The scavenging activity (SA) (%) of the extracts on the DPPH radical was computed using the formula:

Data were analyzed using the SPSS program and GraphPad Prism. Half maximal effective concentration (EC50) was also computed from the SA values of each ethanolic extract. Shapiro–Wilk test was performed to determine if the data were in normal distribution. Mann-Whitney’s test was done to determine which sample extract has significantly different antimicrobial activity when paired with ciprofloxacin. The test was also done to assess differences between the EC50 values of each extract against the ascorbic acid standard. Differences with p-value of less than 0.05 (P< 0.05) were considered as statistically different.

Diameters of zone of inhibitions from the activities of the mushroom extracts are shown in Table 1. G. applanatum, G. lucidum and P. pinisitus exhibited zones of inhibition ranging from 6.55 ± 0.23 mm to 7.43 ± 0.29 mm against S. aureus. The rest of the macrofungi did not exhibit anti-staphylococcal activity.

The radical-scavenging effects of the samples were observed by the capacity to decrease the absorbance of the DPPH solution at 515nm. EC50values of the crude ethanolic macrofungal extracts are shown in Figure 2. In general, extracts exhibited DPPH radical scavenging as most have an activity of above 50% at 200 μg/mL (log[extract]: 2.3). Notable effective antioxidant activities due to low to moderate EC50 values include F. rosea, G. applanatum, G .lucidum, M. xanthopus, with F. rosea having the highest antioxidant activity among all the extracts tested (3.0μg/mL). 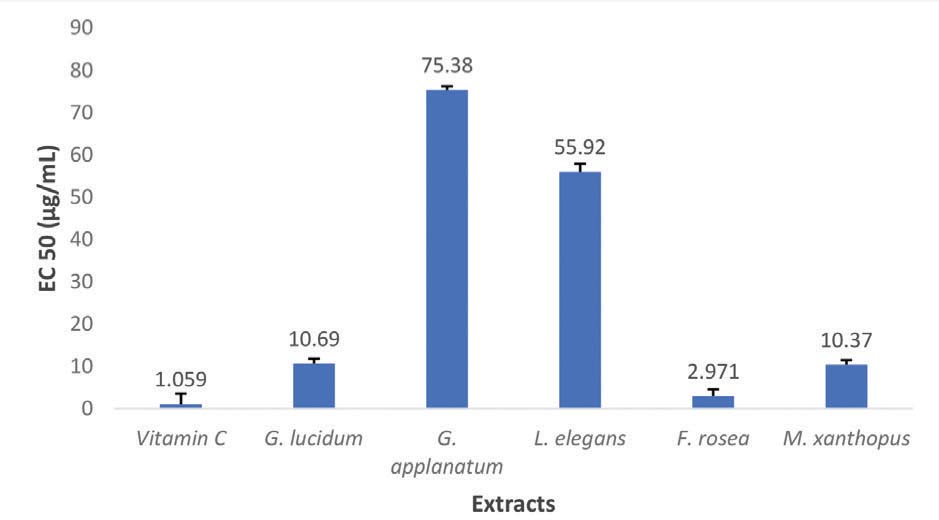 Mushrooms are advantageous as source of bioactive compounds over plants because their fruiting body can be produced in shorter period of time. Different wild mushrooms have been previously reported to have high antimicrobial and antioxidant activity. Phytochemical analysis from previous studies have shown that antioxidants found in mushrooms are mainly from phenolic compounds (phenolic acids and flavonoids), tocopherols, ascorbic acid and carotenoids.9

The minimal to no zone of inhibition against S. aureus did not necessarily mean the absence of antimicrobial activity of the macrofungal extracts. Diffusion assay is not suited to crude extracts with less polar compounds because they are hardly soluble in water and their hydrophobic nature inhibits the diffusion of the extract through the agar media.10

This limitation of diffusion was addressed by broth microdilution method showing better antibacterial activity.The results of broth microdilution assay revealed higher antimicrobial activity compared to Kirby Bauer disc diffusion assay. D. confragosa showed the highest MIC50against S. aureus based on this study. This was supported by previous literature which showed that D. confragosa had MIC50 value of 5 mg/mL against S. aureus. Previous studies also showed that D. confragosa contains tannins and flavonoids which are both major classes of antimicrobial compounds present in macrofungi.2,11,12

F. rosea, G. lucidum, G. applanatum and M. xanthopus have statistically comparable DPPH scavenging effects (p<0.05) to the standard vitamin C. No correlation was observed between the antioxidant and antibacterial properties of the macrofungi tested. Based on previous studies, F. rosea contains triterpenes but it has no antiradical activity against DPPH radicals.13 It is possible that other phytochemicals present in F. rosea is responsible for the excellent antioxidant activity obtained in this study. Exopolysaccharisdes have been previously isolated from G. lucidum which exhibited antioxidant properties.14 Previous study has shown that polysaccharides from G. applanatum has antioxidant activity.15 Previous reports on M. xanthopus showed it contains high amount of ascorbic acid and antioxidant activity.16

D. confragosa, F. rosea, G. lucidum, M. xanthopus and P. pinisitus showed antimicrobial activities against S. aureus with MIC50 ranging from 1250 μg/mL to 10000 μg/mL. F. rosea, G. lucidum, G. applanatum and M. xanthopus have statistically comparable DPPH scavenging effects (p<0.05) to the standard vitamin C. These Philippine macrofungi can be further explored as potential sources of antibacterial and antioxidant compounds. Isolation of these compounds in further studies can lead to the eventual clinical application of mushrooms as agents against bacteria and oxidative stress. 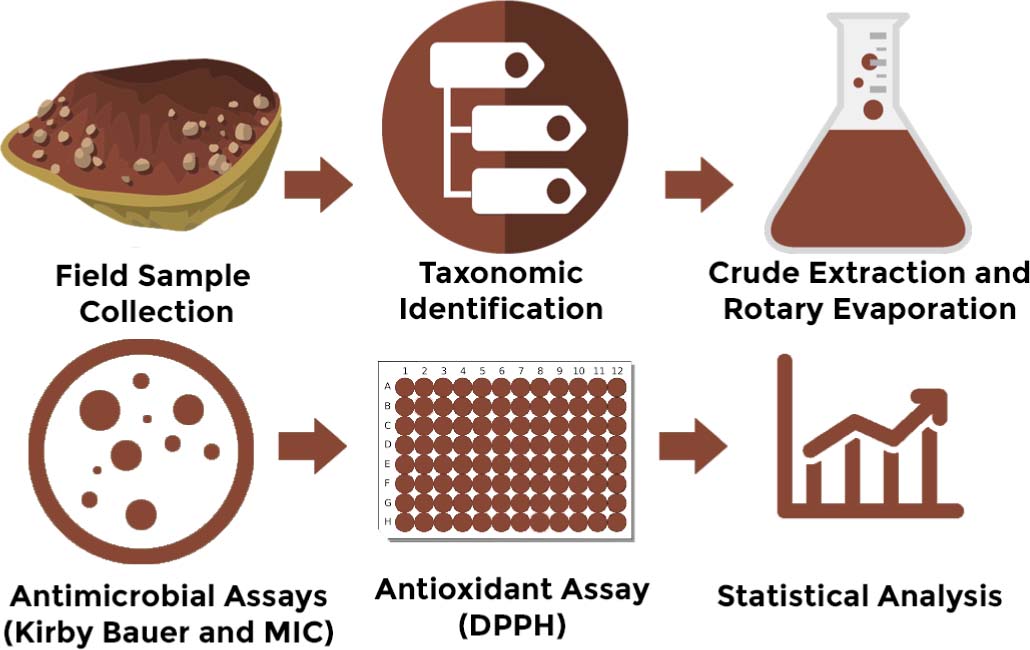 This work was financed by the UP Manila National Institutes of Health Faculty Research Grant (Project Code: NIH 2015-007).

Christine May D. Gaylan: BS Biology graduate at the Department of Biology, College of Arts and Sciences, University of the Philippines Manila, Philippines.

John Carlo Estebal: BS Biology graduate at the Department of Biology, College of Arts and Sciences, University of the Philippines Manila, Philippines.

Ourlad Alzeus G. Tantengco: MD-PhD in Molecular Medicine student at the College of Medicine, University of the Philippines Manila, Philippines.

Elena M. Ragragio: Associate Professor and Chairman at the Department of Biology, College of Arts and Sciences, University of the Philippines Manila, Philippines.

[1] Conflicts of interest CONFLICT OF INTEREST The authors declare no conflict of interest. The funding sponsors had no role in the design of the study; in the collection, analyses, or interpretation of data; in the writing of the manuscript, and in the decision to publish the results.