This research aimed to determine the phytochemical composition and the antioxidant properties in vitro of three types propolis collected from the region of South Sulawesi Province of Indonesia.

Samples from three types of propolis: smooth, rough and mix were extracted with 96% ethanol. The propolis ethanolic extracts (PEE) was dried and studied their antioxidant properties by using FRAP (Ferric Reducing Antioxidant Power) and DPPH radical scavenging assays. Total phenolic compounds were quantified by Folin-Ciocalteu, and total flavonoid contents were also quantitatively determined by the AlCl3 colorimetric method with a microplate reader. The chemical compounds were identified by an ultraperformance liquid chromatography TOF mass spectrometer (UPLC-TOF-MS) using the MSE mode.

Smooth propolis which taken from inside the nest was the most potent antioxidant among of all the types of examined propolis. The antioxidant activity was influenced by the phenolic content of Propolis.

Bees produce propolis, a mixture of bee saliva and gum produced by leaf buds and stems, which come out through plant’s skin collected by bees.1 The physical properties of raw propolis are hard and wax-like when fresh, but soft and very sticky when warm. It has a characteristic aromatic smell and odor; its range color varies from light to dark brown, red, yellow, or green, depending on its age and source.2 Chemical composition, which bees collect from the resinous plant parts, may influence its biological effect.3 The composition of propolis depends on diverse vegetation, phytogeographic region, and time of the collection.4

Propolis contained one of the biological activity was well known as an antioxidant. Propolis showed the most potent antioxidant of all the bee products including honey, royal jelly, and bee pollen.8 Antioxidant activity of propolis was originated from their polyphenolic substances. The use of propolis with antioxidant capacity for prevention and treatment of diseases related to the increase of oxidative stress such as cancer, aging, and cardiovascular diseases.4

This research aimed to determine the phytochemical composition and the antioxidant properties in vitro of three types propolis collected from the region of South Sulawesi Province of Indonesia.

Tetragonula Beehives were taken from Masamba, North of Luwu district, South Sulawesi Province of Indonesia. The types of beehive were smooth (taken from inside the nest), rough (taken from outside the hive) and mix (a combination of both).

PEE was extracted by Muhamad Sahlan method (2013).9 The beehive sample (1 kg), from three types of propolis: smooth, rough and mix, were macerated with 5 L of 96% ethanol, allowed to stand for 16 h. After that, filtrate and residue were separated by filtration. The water was added to extract until 70 % ethanol-water v/v and incubated on water bath 50oC for 30 mins, to separate propolis with wax. Then, the solution was frozen in the refrigerator overnight. Propolis separated with wax apparently at room temperature incubation; separate the wax and propolis by filtration. The filtrate was evaporated using rotary vacuum evaporator (Rotavapor R-205, Büchi, Switzerland) to give a viscous residue and then was dried using oven vacuum. We obtained the dried propolis ethanolic extracts and wax free.

The percentage of yield was determined using the dry weight of extract (a) and soaked samples material (b) using Equation 1,

The extraction yield was calculated for each type of PEE in triplicate.

The qualitative phytochemistry test was conducted as shown in Table 1 according to Indonesian Materia Medika(1995)10 and Harborne (1998).11

TPC method was based on the microplate method given by Ahmad et al (2017)12 with some modifications. A total of 25μL of the sample solution or the standard solution was mixed with 100 μL of 1:4 diluted Folin–Ciocalteu reagent and shaken for 60 s in a 96-well microplate and incubated for 4 min. Then add the mixture with 75 μL of sodium carbonate solution (100 g L−1), and shaken for 60s. Incubate it two h at room temperature. The absorbance was measured at λ 765 nm using a microplate reader 96 well™ (Versa Max ELISA Microplate Reader, USA).

Gallic acid solution (5–300 mgL−1) was used as standards. The calibration curve of standards (gallic acid) was measured by the absorbance from microplate reader instrument and was calculated using SoftMax 6.5.1 software. The equation formula was Y = 0.0633x + 0.0099 and R2 = 0.9947, where Y is the yield of GAE (total phenolic content) and X is the absorbance of gallic acid or samples. All determinations were carried out in triplicate.

TFC was determined by the AlCl3 microplate method given by Massoumeh Farasat (2014)13 with some modification. A total of 20 μL of each sample or standard solution were mixed with 20 μL of 10 % AlCl3, 20 μL of CH3COOK(1M) and 140 μL of distilled water, and shaken for 60s. Incubate it 30 min at room temperature. The absorbance of was measured at λ 415 nm using the microplate reader96 well™ (Versa Max ELISA Microplate Reader, USA).

Quercetin ethanolic solution (5–200 mgL−1) was used as standards. The calibration curve of standards (quercetin) was measured by the absorbance from microplate reader instrument and was calculated using SoftMax 6.5.1 software. The equation formula was y = 0.0366x - 0.0146 and R2 = 0.998, where Y is the yield of QE (total flavonoid content) and X is the absorbance of quercetin or samples. All determinations were carried out in triplicate.

The microplate antioxidant activity with DPPH assay was based on the method described by Bobo Garcia (2015)14 with some modifications. DPPH method procedure of antioxidant activity assay is in Table 2. The absorbance was recorded using a microplate reader 96 well™ (Versa Max ELISA Microplate Reader, USA). The % DPPH quenched was calculated using Equation 2,

The concentration of samples resulting in 50% inhibition on DPPH was calculated, expressed as anEC50value (μg/ml), and obtained by using SoftMax Pro6.5.1 software. All determinations were carried out in triplicate.

The microplate FRAP assay was based on the method described by Bolanos De La Torre (2014)15 and Shinta Marlin (2017)16 with some modifications. The FRAP reagent solution contains 10:1:1 of acetate buffer (300 mM, pH 3.6), TPTZ (40 mM dissolved with 40 mM HCl) and ferric chloride (20 mM in water). The procedure of FRAP method assay is in Table 3. The absorbance was measured at λ 595 nm using a microplate reader (VersaMax; Molecular Devices, USA). The percentage of reducing power capacity can be calculated using the Equation 3,

As = As positive control − As blank FRAP solution

The result was expressed as EC50 (μg/ml), calculated using the equation of nonlinear regression by Microsoft Office Excel and SoftMax Pro6.5.1 software. EC50. The analysis was done in triplicate.

The extractant from three samples of rough propolis, smooth propolis, and mix propolis, then process using rotary evaporator and oven vacuum to get dry extract and wax free of propolis ethanolic extracts. As can be seen in Table 5 obtained highest yield at Mix Propolis Ethanolic Extract (MPEE), PEE from mix propolis, equal to 20.21% with the content of propolis dry matter in PEE equal to 40.33 mg / mL.

Phytochemical screening of PEE showed the presence of alkaloids, flavonoids, phenolics, glycosides, tannins, terpenes and saponins and negative to anthraquinone. Here is the test results data shown in Table 4.

Composition of the solution to test the antioxidant activity with DPPH methods.

Composition of the solution to test the antioxidant activity with FRAP methods.

Extraction yield, content of phenolics and flavonoids, and antioxidant activity of PEE.

From the experiments, SPEE also showed the best reducing power capacity with the EC50 value of 26.41 μg/mL. The descending order of the FRAP reducing power of the PEE was gallic acid > smooth propolis> mix propolis> rough propolis.

The composition of a propolis ethanolic extract of Tetragonula sp was examined on Aquity UPLC and the LC-MS/MS chromatogram was shown in Figure 6-7. Tentative identification of phytochemicals in smooth propolis extract and rough propolis extract were presented in Table 6 and 7, respectively. As shown in Figure 6-7, a total of various compounds were identified by comparing molecular weight (M), and m/z fragment with the UNIFI literature data and the results were shown in Table 6-7. 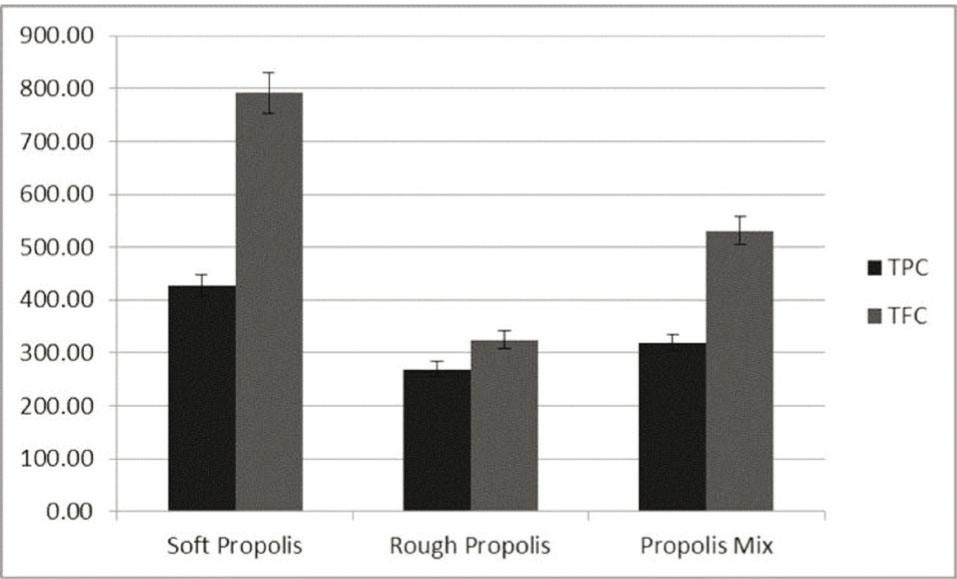 Regression Equation between TPC and Antioxidant Activity by DPPH assay. 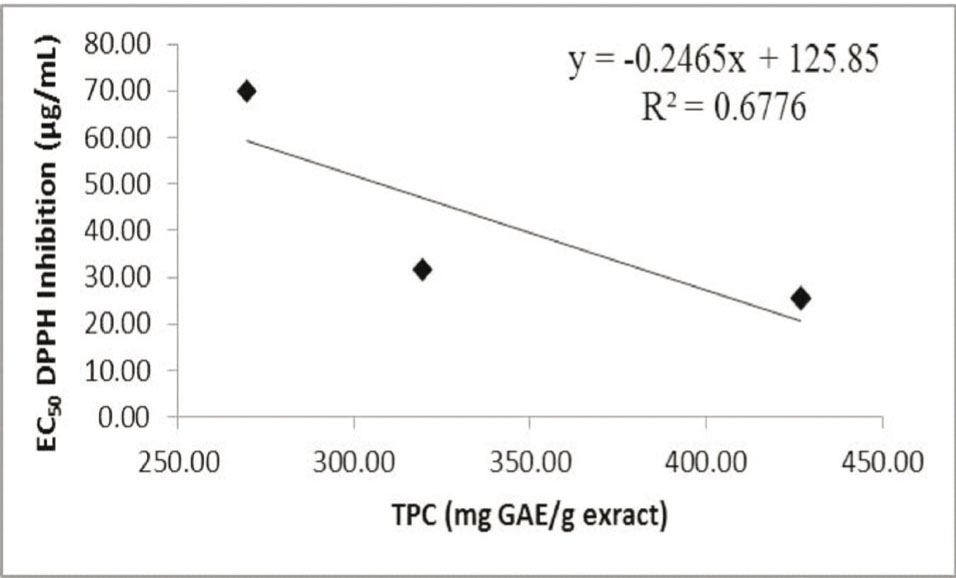 The propolis extraction that modified by Sahlan et al.9 suitable used for propolis that is not heat resistant. In this research, the solvent used is ethanol 96%, which is semi-polar so that the active compounds with the different polarity is expected to be extracted perfectly. The active compounds are obtained while doing the stirring (mixing) a lot faster. Ethanol as organic solvents is commonly used than methanol in the pharmaceutical industry as reaction media in natural products extraction and for cleaning of equipment.

Regression Equation between TFC and Antioxidant Activity by DPPH assay. 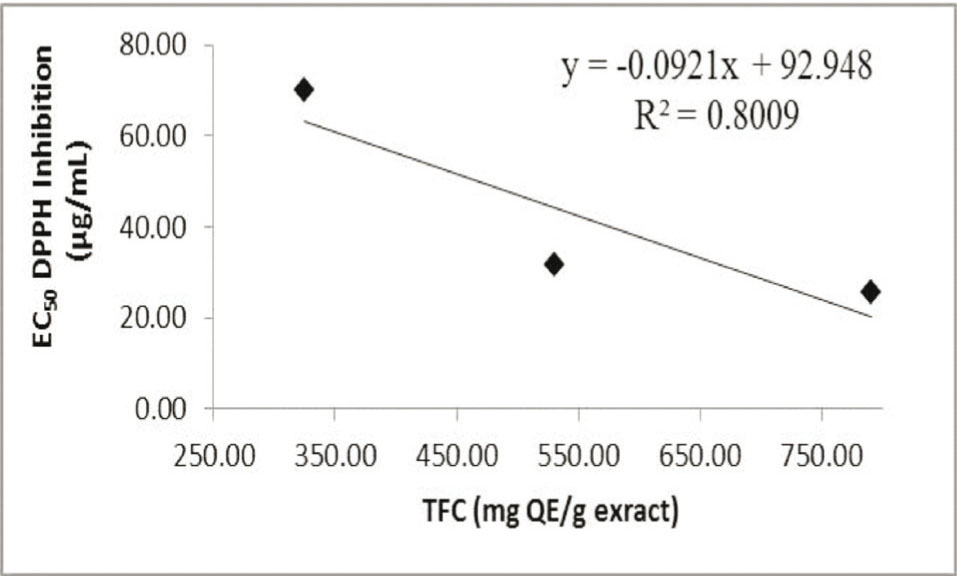 Regression Equation between TPC and antioxidant capacity by FRAP assay. 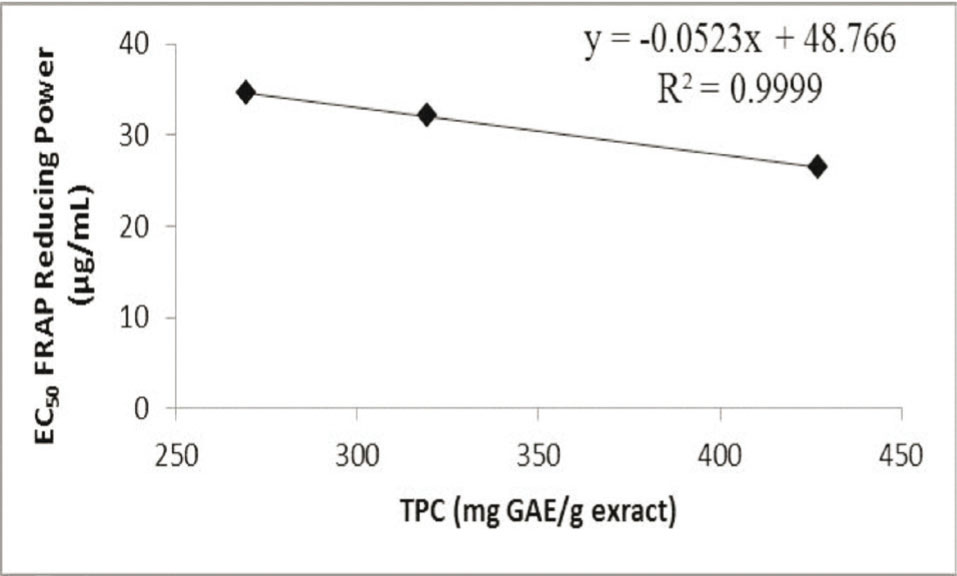 Identification of chemical compounds in smooth propolis by HPLC-ESI-MS/MS data.

Identification of chemical compounds in rough propolis by HPLC-ESI-MS/MS data.

Regression Equation between TFC and antioxidant capacity by FRAP assay. 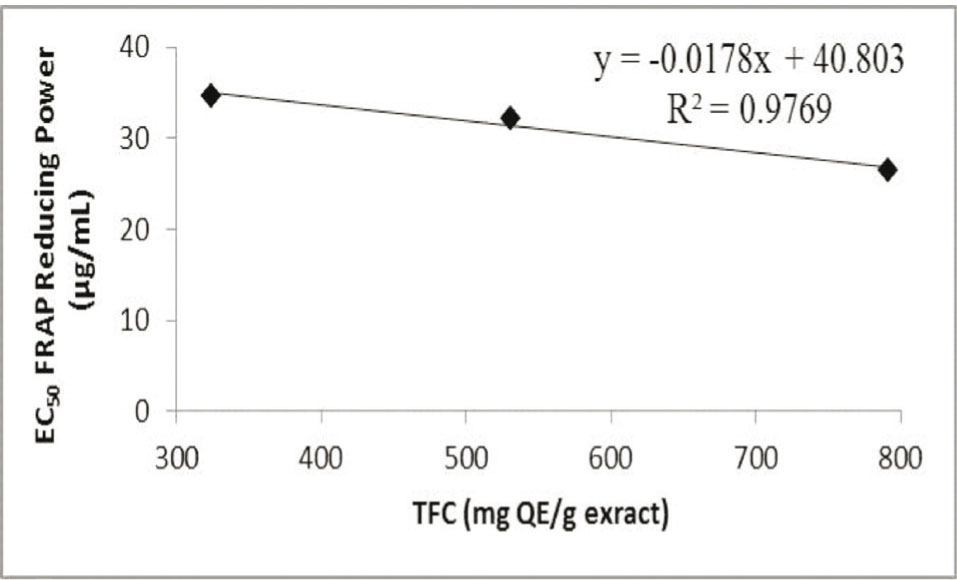 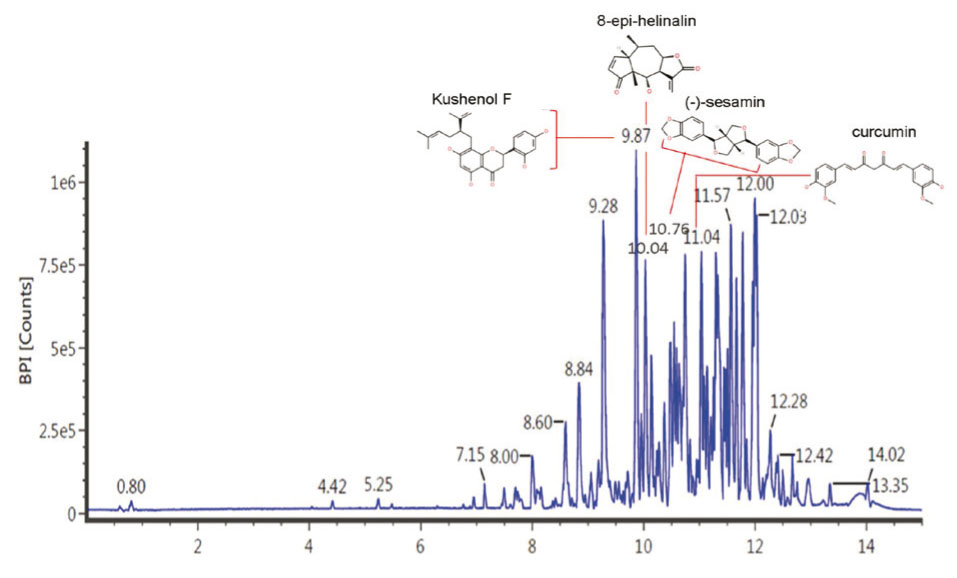 The DPPH assay is based on the reaction of the DPPH radical with the hydrogen-donors molecules from PEE. Phytochemical content in PEE inhibits the oxidation of other molecules, provided depends on its concentration, and reactivity towards the reactive oxygen species. A lower EC50 correlate better with higher DPPH radical scavenging activity, which represents the concentration of the extract to decrease 50% of the DPPH solution initial absorbance. Antioxidant potency is usually associated with the content of phenolic compounds due to their extensive conjugated π-electron systems that facilitate the donation of electrons from the hydroxyl moieties to oxidizingradical species.22

The antioxidant capacity of the PEE was determined using the FRAP method, based on the reduction of potassium ferricyanide. The reducing agents in the PEE induced reduction of the ferric ions (Fe+3) to ferrous ion (Fe+2). Ion Fe+3chelated with nucleophilic aromatic rings as specific chelators groups present in the polyphenolic compound. An increase in absorbance indicates a high reducing power.20 The reducing power capacity of the samples is probably due to the phytochemical components present in propolis extracts.

Tetragonula spp produces propolis that has large quantities of total flavonoid and phenolic compounds compared to other types of bees.26 Propolis have the highest antioxidant activity compare than other bee product.20

Curcumin, 8-epi-Helenalin, (-)-Sesamin, and Kushenol-F, were found in propolis extract have antioxidant activity. Curcumin, from genus Zingiberaceae, has a unique conjugated structure shows a typical radical trapping ability as a chain-breaking antioxidant, including two methoxylated phenols and an enol form of β-diketone.27 Helenalin was an antioxidant potential, while widely considered not to be an attribute of sesquiterpene lactone due to their structure.28 The presence of phenylpropanoid compound namely lignan such as sesamin provide adefense mechanism against reactive oxygen species.29 Kushenol-F, a flavonoid compound, also indicate the complex antioxidant activity.

Smooth propolis which taken from inside the nest was the most potent antioxidant among of all the types of examined propolis. The antioxidant activity was influenced by the phenolic content of. 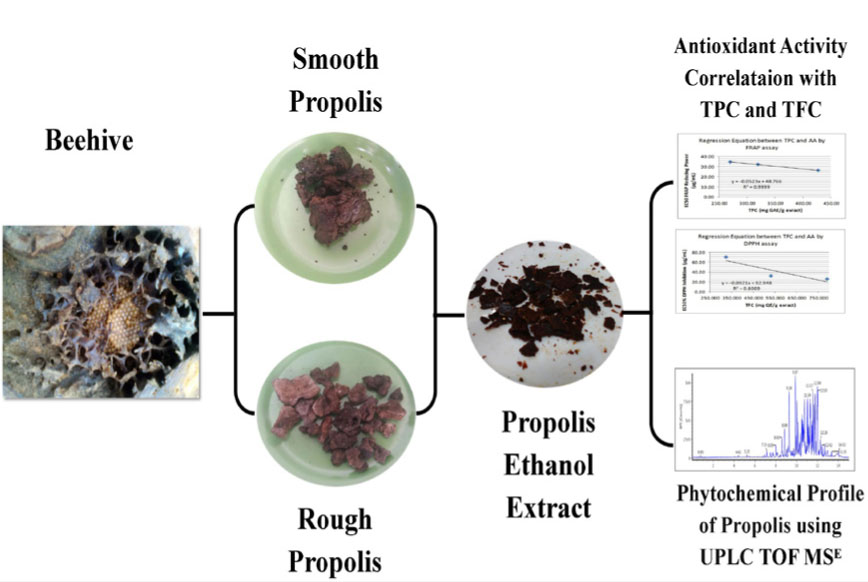 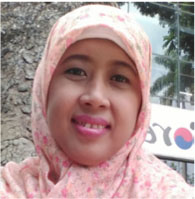 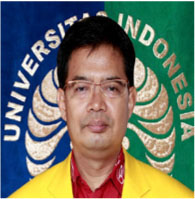 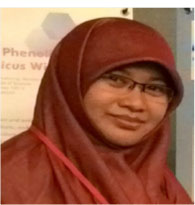 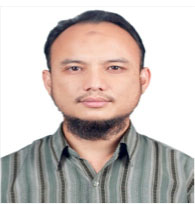 The concentration of samples resulting in 50% antioxidant capacity