In vitro Antibacterial Activity of Chitosan Nanoparticles against Mycobacterium tuberculosis

The aim of the present study is to synthesis of the chitosan nanoparticles for antimycobacterial applications.

The SEM micrographs of the nano-magnetic chitosan showed that they were approximately uniform spheres and the rough surface morphology, have a solid dense cubical or rectangular structure. Using the broth microdilution susceptibility method, chitosan nanoparticle was found to have the antimycobacterial effects with a MIC value of 1200 μg/mL whilst MBCs value of 2400 μg/mL for M. tuberculosis H37Rv.

The conclusion from the study was chitosan nanoparticle have potential as a source of lead compounds that may be developed further into antimycobacterial drugs.

Tuberculosis (TB) is the disease caused by Mycobacterium tuberculosis which 99% of cases were reported in developing countries and over 8 million new cases of infection diagnosed each year and is responsible for more than two million deaths per year. The global incidence rate for TB is growing each year by approximately 1.1% and the number of cases by about 2.4%. Resistance to anti-TB drugs continued to be recognized as a clinical problem through the latter part of the 21st century. As a result, MDR and XDR TB are now becoming a major threat to health worldwide, accounting for almost 3% of all newly reported cases of TB.1 Due to increased drug resistant strains of bacteria such as M. tuberculosis and methicillin resistant Staphylococcus aureus there has been renewed interest in natural products as potential sources of novel antibiotics.2,3

The use of natural products as medicines is well known in rural areas of many developing countries. The natural products claim that their medicine is cheaper, more effective and impart least side effects as compared to synthetic medicines.4,5 In this regard, increasing investigation has been given to chitosan and its derivatives. Chitosan is derived from naturally occurring sources, including the exoskeletons of insects, arthropods such as crustacean shells, shellfish like shrimp, prawns, crabs, and beaks of cephalopods as well as cell walls of fungi.6,7 Chitosan and its derivatives are undisputed biomolecules of great potential by their polyelectrolite properties, including the presence of reactive functional groups, gel-forming ability, high adsorption capacity, complete biodegradability, Antimicrobial, and antifungi, even anti-tumor influence.8,9 Chitosan is widely recognized for its potent antimicrobial activity with, broad spectrum, and high killing rate but low toxicity toward mammalian cells. Although the mode of antimicrobial action of chitosan is not completely understood, it is well established that the molecular structure of chitosan is prerequisite for its antimicrobial activity.10,11 Chitosan has been investigated as an antimicrobial material against a wide range of target organisms like algae, bacteria, yeasts, and fungi in experiments involving in vivo and in vitro.12

Some researcher has stated that chitosan generally showed stronger effects for g-positive bacteria (e.g. Listeria monocytogenes, Bacillus megaterium, B. cereus, Staphylococcus aureus, Lactobacillus plantarum, L. brevis, L. bulgaris, etc.) than for g-negative bacteria (e.g. E. coli, Pseudomonas fluorescens, Salmonella typhymurium, Vibrio parahaemolyticus, etc.).10,11,12 The antibacterial activity of chitosan is influenced by a number of factors that include the type of chitosan, the degree of chitosan polymerization and some of its other physicochemical properties.

The typical production of chitosan from crustacean shell generally consists of three basic steps: demineralization, deproteinization, and deacetylation.6 The shells were demineralized by agitating continuously with 5% HCl at the ratio of 1:15 (w/v, shell to solution) 36 h at room temperature. The demineralized shells were treated with 5% NaOH solution at the ratio of shell to solution of 1:10 (w/v) at 90-95°C for 6 h. The deproteinized shells were filtered and washed with tap water until NaOH was removed completely, then dried overnight in an oven at 55-60°C. The shells were filtered and washed with tap water until became neutral. Then deacetylation of chitosan was carried out by hydrolyzing with 80% NaOH at the ratio of 1:20 (w/v, chitin to solvent) at 90-95°C for 5 h. This product was washed with tap water until it became neutral and dried overnight at 55- 60°C. In the preparation of chitosan solutions, 1.0% (w/v) chitosans were dispersed in a 1.0% (v/v) acetic acid solution.

In the present work, the chitosan nanoparticles were synthesized from the chitosan using sodium tripolyphosphate as a crosslinking agent by ionotropic gelation method.17 Initially in order to create the homogeneous chitosan solution, about 1.5 g of chitosan dissolved in 200 ml of 2% acetic acid solution was kept under magnetic stirring process for about 20 min. Then to the above prepared chitosan solution, 0.8 g of sodium tripolyphosphate dissolved in 107 ml of conductivity water was added drop wise and stirred well for about 30 min to reach equilibrium. A milky colored emulsion like appearance of chitosan nanoparticles was formed upon the ionic cross linking between the sodium tripolyphosphate and chitosan solution. After reaching equilibrium, The suspension was formed in above mentioned conditions. The nanoparticles were separated by centrifugation at 20,000 g and 14°C for 30 min, freeze-dried and stored at 5 ± 3°C.

Culture and preparation of Mycobacterium tuberculosis

Mycobacterium tuberculosis strains H37Rv were obtained from the Institute of Tropical Disease, Airlangga University, Surabaya, Indonesia. Mycobacterium tuberculosis was cultured at 37°C in Middlebrook 7H9 broth (Becton Dickinson, Sparks, MD) supplemented with 0.2% glycerol (Sigma Chemical Co.,St. Louis, MO) and 10% OADC (oleic acid-albumin-dextrose-catalase; Becton Dickinson) until logarithmic growth was reached. Each culture was mixed with a sufficient volume of sterile supplemented Middlebrook 7H9 broth to achieve a turbidity equivalent to that of McFarland’s No. 1 standard. To obtain the test inoculum, this suspension was further diluted 1:50 with the same culture medium to approximately 6 × 106 colony-forming units (CFU)/mL immediately before use. A change in color from blue to pink indicated the growth of bacteria, and the MIC was defined as the lowest concentration of drug that prevented this change in color.

REMA was performed with minor modifications.19,20 The resazurin microtiter assay (REMA) plate method was performed in 7H9-S medium containing Middlebrook broth, 0.1% Casitone, and 0.5% glycerol and supplemented with oleic acid, albumin, dextrose, and catalase (Becton-Dickinson). Briefly, 100 μL of Middlebrook 7H9 broth was dispensed into each well of the microtitre plate. Serial four-fold dilutions of chitosan nanoparticles (0; 150; 300; 600; 1200; and 2400 μg/mL) and standard antimycobacterial drugs were made in the plate. Mycobacterium tuberculosis strains H37Rv suspension (100 μL) containing approximately 6 × 106 CFU/mL was added to all the wells. Sterility control and growth control were also included. The plate was wrapped in aluminium foil and incubated at 37°C for seven days. After completion of the incubation period, 30 μL resazurin solution (100 μg/mL) was added to each well and plate was again wrapped in aluminium foil and incubated overnight. The plate was then observed for change in color. The color change from blue to pink or colorless indicated growth of the bacteria. The lowest concentration of drug or extract that prevented color a change from blue to pink was taken as the upper limit for Minimum Inhibitory Concentration (MIC) range; the highest drug/extract concentration that showed change in color from blue to pink was considered the lower limit. All evaluations were carried out in quadruplicate.

Screening of chitosan nanoparticles and its solvents for antimycobacterial activity against Mycobacterium tuberculosis strain H37Rv were done using the paper disc method.21,22 For the treatment, each of 0; 150; 300; 600; 1200; 2400 μg/mL chitosan nanoparticles solutions were slowly absorbed into the sterilized paper disc (diameter: 8 mm, Watman, England) and adhered to the surface of the plate on which Mycobacterium tuberculosis strains H37Rv at a concentration of 106 CFU/ml had been inoculated in Middlebrook 7H9 broth. Sterilized distilled water was used as a control. After culturing for 24 h in an incubator at 37°C. Antibacterial activity was defined as the diameter (mm) of the clear inhibitory zone formed around the discs. MBC was defined as the lowest concentration that induced the clear inhibitory zone formed around the discs.

Scanning electron microscopic (SEM) of chitosan (A) and chitosan nanoparticles (B). 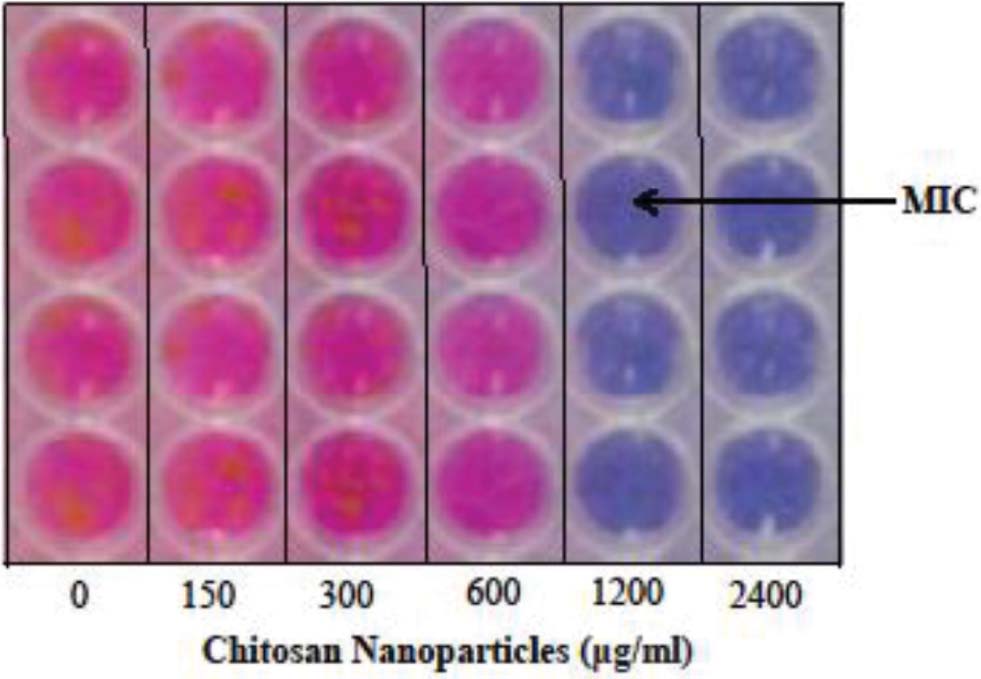 MBC of chitosan nanoparticles against Mycobacterium tuberculosis H37Rv on the paper disc method. 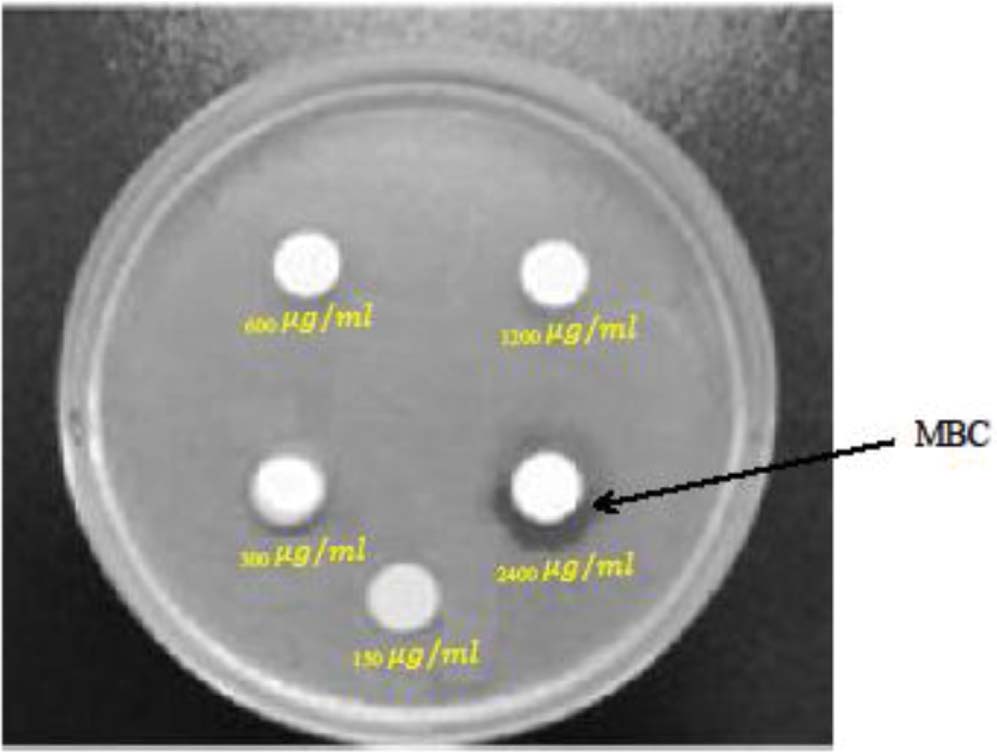 Tuberculosis is a chronic disease caused by Mycobacterium tuberculosis. The emergence of antibiotic-resistant strains of this species underscores the need for novel effective drugs against resistant mycobacteria as first-line antituberculosis medications.1 The uses of natural product as traditional medicines are accepted, particularly in developing countries.2 This led us to the investigation of the effects of chitosan nanoparticles from shrimp on antimycobacterial activity.

Investigation of MIC and MBC plays an important role during the process of screening, prioritizing, and optimizing a chemical series during early drug discovery. Minimum Inhibitory Concentration determination by using Resazurin Microtiter Plate Assay (REMA) method. Many researchers have used the Resazurin Microtiter Plate Assay (REMA) method to screen test substances for antimycobacterial activity against M. tuberculosis.19 Resazurin, an oxidation-reduction indicator, has been used to assess viability and bacterial contamination and to test for antimicrobial activity. Results obtained using the REMA assay is faster and less expensive. Bearing in mind considerations of rapidity, low technology requirements and low cost, microplate assays that use Resazurin type compounds have the potential of becoming the methods of choice for drug susceptibility testing of M. tuberculosis in places where TB is a major problem.20 The MBC of the chitosan nanoparticles against Mycobacterium tuberculosis was conducted on the paper disc method. In this study, MIC of chitosan nanoparticles against Mycobacterium tuberculosis strains H37Rv was 1200 μg/mL, while MBC of chitosan nanoparticles against Mycobacterium tuberculosis strains H37Rv was 2400 μg/mL. These results are in agreement with reports in the literature that have documented the antibacterial activity of chitosan against a large number of g-positive and g-negative bacteria. Some researcher has also shown that chitosan generally showed stronger effects for g-positive bacteria (e.g. Listeria monocytogenes, Bacillus megaterium, B. cereus, Staphylococcus aureus, Lactobacillus plantarum, L. brevis, L. bulgaris, etc.) and for g-negative bacteria (e.g. E. coli, Pseudomonas fluorescens, Salmonella typhymurium, Vibrio parahaemolyticus, etc.).7,8,14 The polycationic characteristic of chitosan in acidic medium is the main factor involving to the antimicrobial activity. Due to the positive surface charges at acidic condition, chitosan interacts with anionic components on bacteria surface, such as peptidoglycan and teichoic acid in cell wall of G-positive bacteria, and negatively charged lipopolysaccharide in outer membrane of G-negative bacteria. The chitosan molecules be able to pass through the bacterial cell wall, composed of multilayers of cross-linked murein, and reach the plasma membrane. This effect due to the electrostatic interactions between chitosan molecules and microbial cell membranes, leading to the leakage of proteinaceous and consequently increased chitosan penetration to nucleus and binding to microbial DNA, which can inhibit mRNA and protein synthesis.7,10,14,24 This suggests that chitosan has potent activity as antibacterial and this has been confirmed experimentally.

The findings from this research can be concluded that chitosan nanoparticles have a relatively rougher surface with an uneven structure which exhibited highly amorphous feature, and it has promising anti-tubercular activity by preliminary In vitro techniques. Therefore, it has the definite potential as a source of compounds that may be developed further into antimycobacterial drugs. 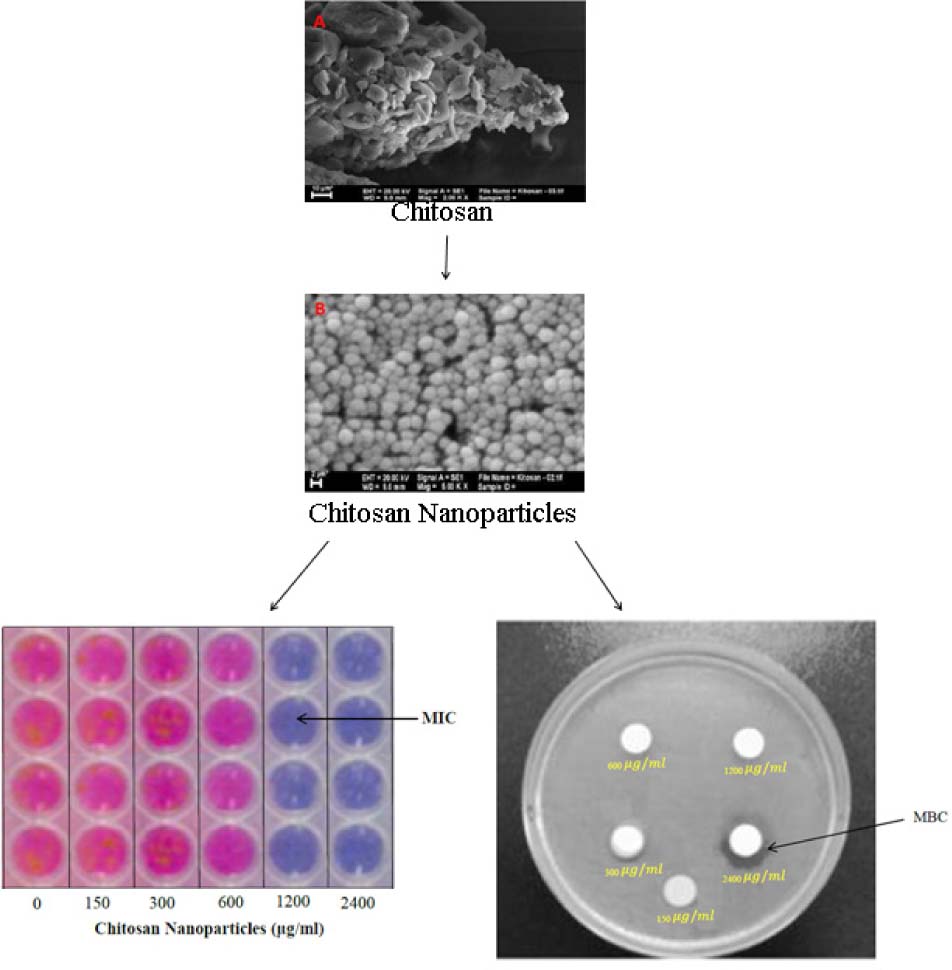 This study was supported by Ministry of Research, Technology and Higher Education of the Republic of Indonesia. Grants No: 120/Sp2H/LT/DRPM/IV/2017 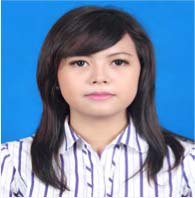 [1] Conflicts of interest CONFLICT OF INTEREST Authors declare no conflict of interest.