The study was carried out to isolate and identify potential antibiotic-producing bacteria associated with water cabbage (Pistia stratiotes) roots collected from Pampanga River, Pampanga, Philippines. Seven (7) bacterial colonies were randomly chosen at the 10-6 dilution factor. Antibiotic sensitivity test using agar well method revealed that only one isolate out of 7 selected colonies can inhibit the growth of the test organisms. Specifically, the isolate (namely T4) supernatant inhibited E. coli and B. subtilis but not S. aureus. T4’s ability to inhibit E. coli was comparable with that of Tetracycline (positive control). Surprisingly, its inhibition of B. subtilis is significantly higher than that of Tetracycline. 16S rRNA gene sequence analysis using NCBI Basic Local Alignment Search Tool revealed 99% similarity of the isolate (T4) with Exiguobacterium acetylicum, a gram-positive, antibiotic-producing bacterium previously isolated from an apple orchard rhizosphere.

Available antibiotics generated by pharmaceutical companies nowadays are mostly natural products obtained from bacteria and other microorganisms.1 These antibiotics are active substances which have the capability to kill pathogens by means of different mechanisms and strategies.2 Some antibiotics such as beta lactam drugs like Penicillin, Cephalosporin, Carbapenems and Monobactams are known to disrupt bacterial cell wall3 whereas Tetracycline and Aminoglycosides bind to the 30S ribosomal subunit4 while Clindamycin, Macrolides and Chloramphenicol bind to 50S ribosomal subunit resulting in ribosomal activity disruption.5 Furthermore, Sulfonamides disrupt folate synthesis,6 quinolones disrupt DNA gyrase7 and Rifampin targets the RNA polymerase.8

In some cases, active sites of compounds from natural sources are being identified and copied to be synthesized in the laboratory for mass production. Some antibiotics are being fused with another antibiotic or fragment of antibiotic to make them more effective and potent like in the case of Amoxiclav which is known for killing many infection-causing pathogens.9

Bacteria that produce antibiotics have gained selective advantage against competing microbes in their environments.14 To out compete other microbes, these antibiotic-producing bacteria release chemicals that will kill other microbes by releasing substances that are potential antimicrobial agents15 like in the case of Streptomycin produced by actinomycete Streptomyces griseus isolated in soil where competition of microbes is very stringent.16

As roots of many plants were reported as pools of potential antibiotic producing bacteria, root-associated bacteria from water plant must also be explored for antibiotic discovery. Water cabbage (Pistia stratiotes) which is an aquatic plant commonly found floating on lakes, streams and rivers is known to survive polluted areas like in Pampanga River.17 However, there are no reported studies on its root-associated microbiome. In this study a root associated bacteria which was identified 99% Exiguobacterium acetylicum based on 16S rRNA gene sequencing was found to have a strong antibiotic potential.

The plant samples were collected from Danga River, a part of Pampanga River, using sterile tongs and then contained in a sterile bag. A separate plant specimen was submitted for identification and authentication at the Botany Division of the National Museum of Natural History, Manila, Philippines.21

The ten (10) collected water cabbages were washed using 0.9% saline solution. Ten grams of roots were placed in a sterile 225ml flask. Sterile peptone water (HiMedia) with a pH of 7.0 was added and the flask was covered and agitated for 5 minutes. After homogenization of the sample, serial dilution was prepared to obtain countable colonies ranging from the 1:10 to 1:106.

One (1) mL from each dilution prepared was seeded into sterile petri dishes. Subsequently pre-cooled nutrient agar (HiMedia) at 38oC to 40oC with a pH of 6.9 was poured in each of the plate. The plates were allowed to solidify for four (4) hours and were incubated in an inverted position at 35oC for 48 hours.

After incubation, the number of growing colonies were assessed. Plates with countable growths were used for colony selection. A total of six well-isolated colonies from the 10-6 dilution plate were picked individually and sub-cultured twice. Isolates were initially coded as T1 for the first colony, T2 to T7 for the subsequent colonies. Retention of the purified culture of the 7 isolates were also prepared for molecular identification after the antimicrobial screening.

The seven isolated colonies were inoculated in 100ml nutrient broth (Hi-Media) in a flask and incubated at 35oC for 5 days with daily shaking intervention. After incubation, cell-free supernatant was prepared by obtaining 10ml of bacterial broth culture. Centrifugation at 2000 rpm for 5 minutes was done followed by membrane filtration using 0.45 µm nylon filter (Whattman) to ensure that there are no bacterial cells in the supernatant. The cell-free supernatants were stored at 4oC for 2 hours prior to antibiotic sensitivity testing.

Test organisms including E. coli, B. subtilis, and S. aureus were obtained from the Department of Public Health Medical Microbiology of the University of the Philippines, Manila. A loopful of each test organism was inoculated into 2.5 ml sterile peptone water contained in a small tube and compared to McFarland standard to give an approximately 1.5 × 108 cfu/ml of the test bacterium.

Tetracycline with a concentration of 100 µL per well was set as positive control and double distilled water as negative control.

Prepared plates containing Muller Hinton Agar (HiMedia) with pH 7.2 was inoculated with 0.3mL of prepared inoculum of the test strains separately. Sterile 10mm cork-borer was used to make wells on each plate. Three (3) hole/ well were created on each plate representing 3 replications.

One hundred (100) µL of cell-free supernatant from each isolate were put on the nutrient agar well accordingly. Same procedure was done for the two controls. The plates were then incubated at 35°C for 24 hours. Zones of inhibition were measured after incubation and the measurement was expressed as millimeter (mm).

Molecular Identification of the isolate

The isolate exhibiting inhibition of test strains were subjected for molecular identification using 16S rRNA gene sequencing at the Philippine Genome Center (PGC) of the University of the Philippines Diliman. DNA extraction, 16S rRNA gene amplification, gel electrophoresis and capillary sequencing were done at the PGC.

Bioedit nucleotide sequence alignment software was used for cleaning and editing the data sequence. The sequence was compared with the publish sequences in GenBank using Basic Local Alignment Search Tool (BLAST) of the National Center for Biotechnology Information (NCBI) to determine their identity.

Data were subjected to One Way Analysis of Variance (ANOVA). The difference among the means were further analyzed using HSD test. Statistical analyses made use of the GraphPad Prism software version 6.

Out of 6 plates only the plate at 10-6 dilution contained countable colonies. The rest of the plate’s colonies are reported as Too Numerous to Count (TNTC). Out of 40 colonies from highest plate (10-6 dilution), only 7 colonies (growing on the top layer of the agar) were randomly chosen.

Figure 1 shows the zones of inhibition of the seven isolates against Escherichia coli. The fourth isolate (T4) and T+ (Tetracycline) inhibit E.coli with mean diameter of 24.6mm and 25. 33mm respectively. Mean comparison reveals that T4 and T+ are comparable, suggesting that the T4 cell free supernatant has same capability to inhibit E. coli. T0 (negative control) T1, T2, T3, T5, T6 and T7 did not inhibit E. coli with a mean diameter of zero (0 mm).

The significant comparable result on the inhibition of E.coli by T4 supernatant and Tetracycline denotes the strong antibiotic potential against gram negative bacteria. Also, it suggests that the cell free supernatant contains compound or peptide which is excreted by bacteria extracellularly. 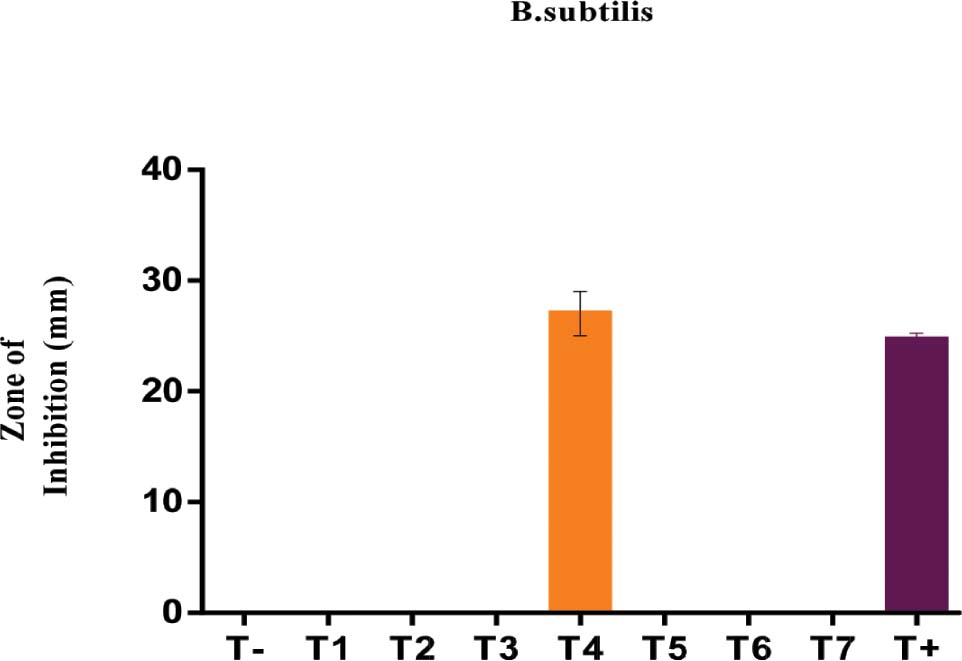 The significantly higher potential of T4 to inhibit B. subtilis compared to the positive control (Tetracycline) signifies a potentially effective antimicrobial compound/peptide produced by the root-associated bacteria (T4). 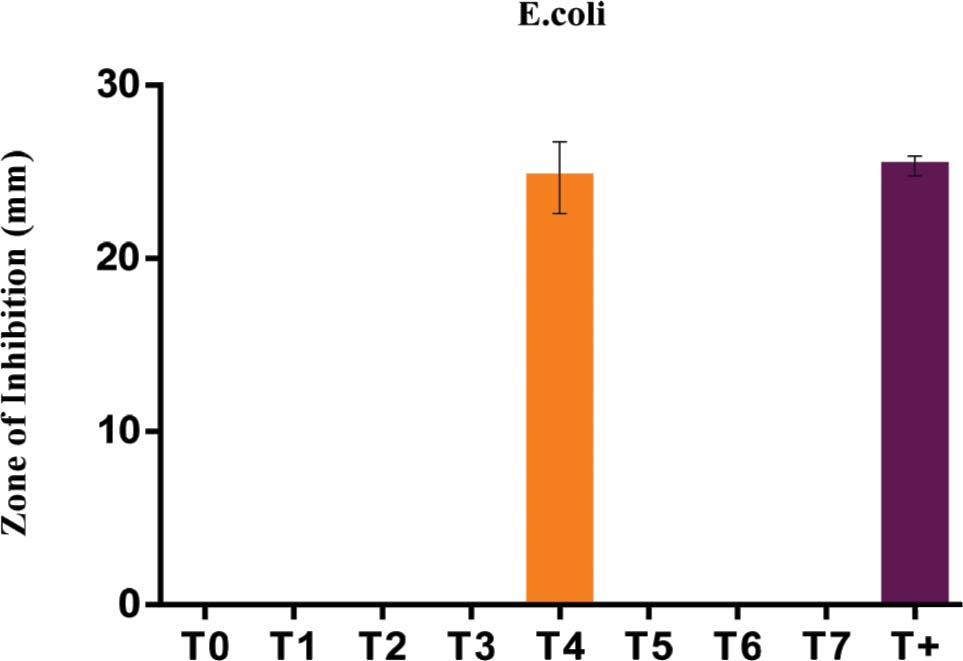 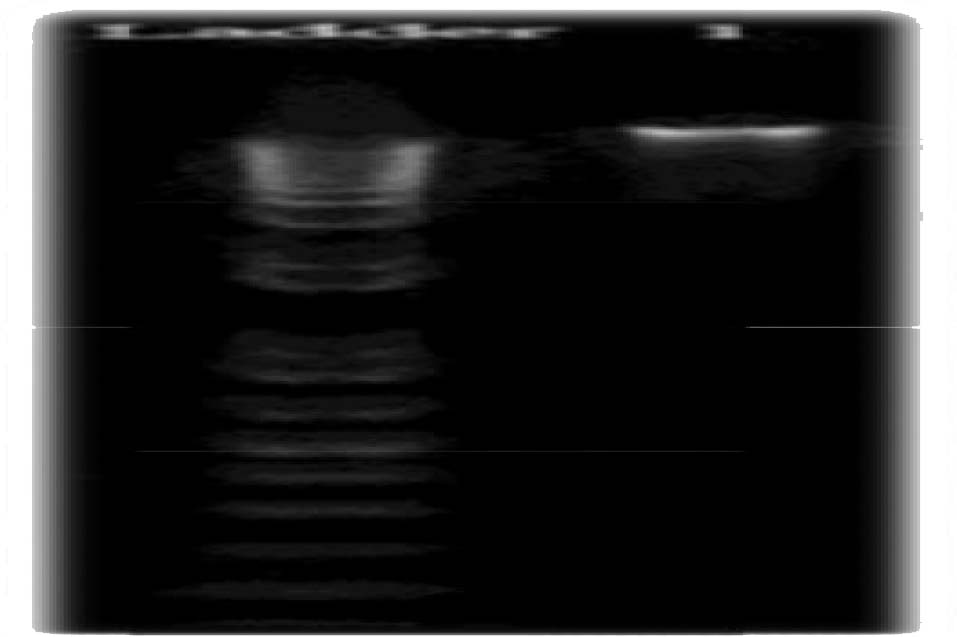 S. aureus was not inhibited by the cell free-supernatant of T4 and as expected was inhibited by positive control with the mean diameter of 22mm. The non-inhibition against S. aureus suggests that the compound in T4 supernatant possesses specificity in terms of killing bacteria.

Molecular Identity of T4 bacteria based on 16S rRNA sequencing

The antibiotic producing bacteria isolated from the root of water cabbage (Pistia stratioties) in this study was identified as Exiguobacterium acetylicum with 99% homology on the sequence available in the public domain. Exiguobacterium acetylicum is a gram- positive, yellow bacterium which was found to produce volatile compound (Kumar, 2008) as it showed inhibitory activity against E. coli and B. subtilis.

In this study, a potential antibiotic-producing root-associated bacteria was isolated from water cabbage, Exiguobacterium acetylicum. The cell-free supernatant from the isolate was found to inhibit the growth of E. coli and B. subtilis but not S. aureus. Since the used supernatant is cell-free it can be concluded that a substance is secreted by Exiguobacterium acetylicum on its extracellular environment.

Ugaya A , author. The use of Pistia stratiotes to remove some heavy metals from Romi Stream: A case study of Kaduna Refinery and Petrochemical Company polluted stream. IOSR Journal of Environmental Science. 2015;9:48–51