Among five species of Curcuma (C. albiflora, C. aromatica, C. longa, C. oligantha, and C. zedoaria), Harankaha is an important anti-inflammatory drug have been used in Sri Lankan Traditional Medicine. There are three species under the same vernacular name Harankaha; C. albiflora, C. zedoaria and Zingiber zerumbet. Amongst, C. albiflora is an unexplored and endangered. Current study was conducted to compare anti-inflammatory activity among above mentioned species.

It can be concluded from the current study, C. albiflora Thw. grown in Sri Lanka and plants claimed as Harankaha, which seems to have marked anti-inflammatory activity.

Plants were collected from 2016 to early 2017 in Sabaragamuwa province. Voucher specimens of the plants were authenticated from National Herbarium, Peradeniya, Sri Lanka.

Inflammations were induced by 0.05 ml of 1% carrageenan (in 1% methyl cellulose) into the plantar surface of the left hind paw under mild anesthetic ether anesthesia. Treatments were performed prior 1h of 1st reading. The paw volumes were measured before the injection of carrageenan, and 1h, 2h, 3h, and 4h after the treatment[3,4].

Granulomatous lesions were induced by surgically implanting two cotton pellets subcutaneously in the dorsal region of the rats near the axila. C. albiflora extract was administered orally before 1 h of the surgery. Rats were anaesthetized using ketamine (0.6 ml kg-1) and autoclaved sterile pellets of cotton (8 ± 0.5 mg each) were implanted. The rats of the control group were administered with water and standard group by Indomethacin (5 mg/kg). Drugs and water was administered for consecutive 7 days. Rats were anaesthetized on the eighth day using ketamine and the pellets were dissected out carefully and dried at 60 oC (3 d)[3,4]. Mean weight of the granuloma tissue formed around each dried pellets were recorded.

The 200 mg/kg significantly impaired the paw oedema, at 1h (by 61%). In contrast, the 400 and 600 mg/kg tested significantly inhibited the paw oedema measured; 1h (by 45-58%), 2h (by 24-46%), 3h (by 21-27%). Therefore it showed the anti-inflammatory effect of C. albiflora was inversely dose dependent (Table 1). Indomethacin induced significantly impairment of oedema at all-time points measured (58-89%). Initial phase lasting primarily mediated via production of cox-1, histamine, serotonin, bradykinins etc. Since C. albiflora inhibited 1st phase, anti-inflammatory effect may relate with above mentioned pathways. C. albiflora showed its anti-inflammatory activity in initial phase. As per the formaldehyde induced paw oedema experimental results, the drug group (400 mg/kg and 600 mg/kg) significantly (P<0.05) reduced the paw oedema from the day 5 to 7 by 400 mg/kg when compared with the control (Table 2). This effect related prostaglandin synthesis can be proved by cotton pellet induced granuloma test. From the present study, it can be concluded that 400 mg/kg treated group showed higher inhibition percentage than 200 and 600 mg/kg treated groups. According to the cotton pellet induced granuloma test results C. albiflora showed low (as 19.5% on 400 mg/kg) anti-inflammatory activity on cotton pellet granuloma test, it can be concluded that anti-inflammatory activity of C. albiflora is not linked with prostaglandin synthesis (Table 3).

It can be concluded from the current study, C. albiflora Thw.grown in Sri Lanka and claimed as Harankaha, has marked anti-inflammatory activity. 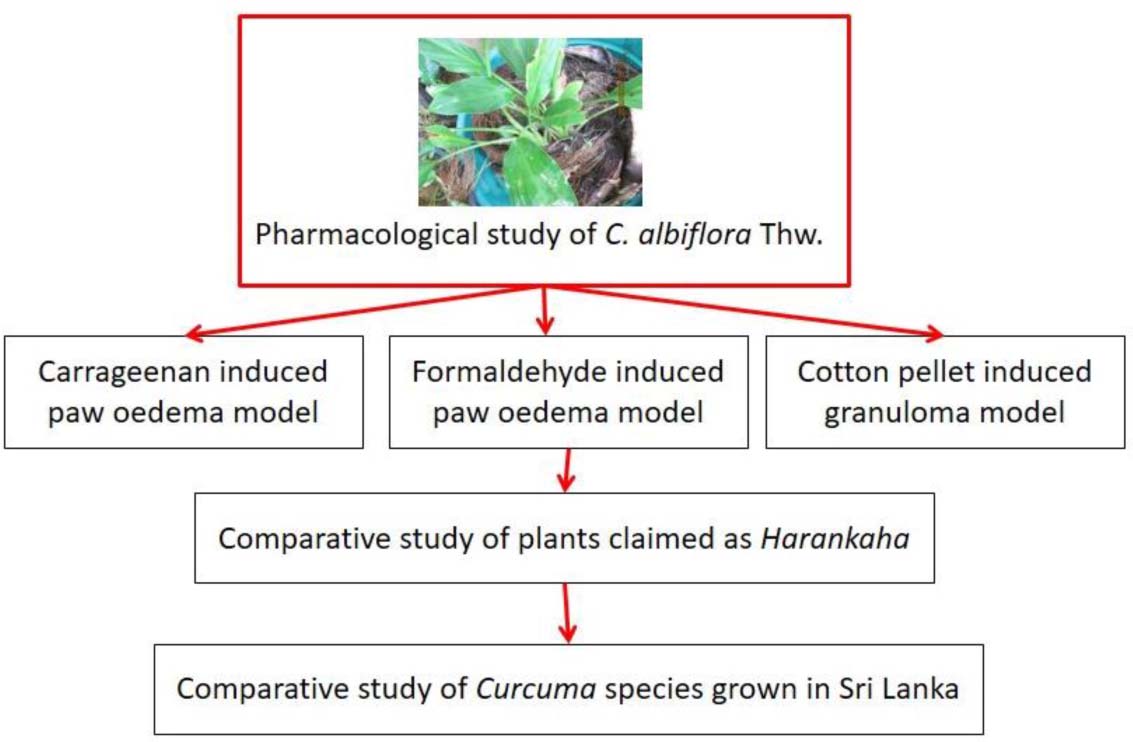 Authors are sincerely thankful to the Pharmacognosy lab, ITI and Animal house, Department of Zoology, University of Colombo for bench-work.

The National Red List 2012 of Sri Lanka, Conservation Status of the Fauna and Flora. Sri Lanka: Ministry of Environment; 2012

Krishnaswamy K , author. Turmeric the salt of the orient is the spice of life. (New Delhi). Allied Publishers Private Limited. 2000;