An important approach to diabetes treatment involves the regulation of postprandial hyperglycemia by delaying the release of glucose into the bloodstream using inhibitors for carbohydrate digesting enzymes such as maltase. Current synthetic antidiabetic drugs are associated with side effects that have restricted their usage. Antidiabetic plants such as Zingiber officinale and Trigonella foenum-graecum, commonly used as medicinal herbs in India, provide an attractive alternative as a source of maltase inhibitors.

This study aimed to determine maltase inhibitory activity in antidiabetic plants in comparison with that of a synthetic drug, Acarbose, used as a positive control.

Unpaired, two tailed t-test was used to detect the significant difference between the mean maltase enzyme activity of the control and that of the test.

Diabetes mellitus is a multifactorial metabolic disorder affecting over 400 million people worldwide and is estimated to affect about 100 million people in India by 2030.1 Type 2 diabetes is prevalent in over 90% of the patients, whereas the remaining has type 1 diabetes. The prevalence of diabetes is most likely to double by 2030 with an increase of up to 69% in developing nations and 20% in developed nations. 2 There are several conventional treatment strategies for the management of diabetes: insulin injection, stimulating insulin release using sulphonylureas,3 reducing hepatic gluconeogenesis,4 upregulating glucose transporters in target tissues using metformin,5 and reducing insulin resistance using thiazolidinediones.6 However, one of the most important antidiabetic therapeutic approaches is the use of alpha-glucosidase inhibitors,7,8 a class of antidiabetic drugs which inhibit alpha-glucosidases (EC 3.1.2.20, maltase). They are membrane-bound carbohydrate digesting enzymes located on the brush border epithelium of the intestine. Postprandial hyperglycemia is the clinical hallmark of diabetes mellitus; thus, regulating blood glucose levels is a primary goal in antidiabetic treatment in order to prevent chronic diabetic complications.9 Postprandial hyperglycaemia is related to the digestion rate of dietary starch, which provides a direct source of glucose. Maltase inhibitors target the reduction in the rate of dietary carbohydrate digestion by inhibiting the hydrolysis of oligosaccharides to glucose and, thereby, delaying the release of glucose into the bloodstream. This reduces postprandial hyperglycemia in type 2 diabetic patients.10 Currently used maltase inhibitors such as acarbose, miglitol, and voglibose are associated with negative gastrointestinal symptoms such as flatulence and diarrhea, thereby restricting their usage.11–17 Plants are a natural reservoir of phytochemicals that act as antidiabetic agents and seldom show deleterious effects, and they may be a source of maltase inhibitors. This study aimed to detect maltase inhibitory activity in antidiabetic plants using an in vitro enzyme inhibition assay. There have been many reviews on plants and their antidiabetic properties.18–20 and in this study, out of the repertoire of antidiabetic plants found in nature, Zingiber officinale (ginger) and Trigonella foenum-graecum (fenugreek) were screened for maltase inhibitory activity. Maltase was extracted from Saccharomyces cerevisiae as it is an easily available, eukaryotic source of the enzyme. Upon aligning the amino acid sequences of maltase from two different sources using the BLAST tool: Homo sapiens (Human Intestinal Maltase), and S. cerevisiae (Baker’s Yeast Maltase), there was 4.819 % identity in the sequence. A significant effect of the antidiabetic plant extract on yeast maltase should also have a similar effect on human intestinal maltase. The aqueous extracts of these plants were tested statistically for significant difference in the maltase enzyme activity using an unpaired, two tailed t-test. The preliminary findings reveal that the antidiabetic property of the selected plants could be attributed to their maltase inhibitory activity.

The plant specimens, rhizome of Z. officinale and the leaves of T. foenum-graecum, were purchased from local vegetable vendors at Crawford Market, Mumbai, India. The authentication of the plant specimens was conducted at the Blatter Herbarium, St. Xavier’s College, and Mumbai, India. The plant material was deposited in the herbarium for future reference. Maltose Monohydrate, Peptone, and Yeast Extract were purchased from HiMedia Laboratories Pvt. Ltd., Mumbai-400086, India. Glucose Kit (ERBA Diagnostics Mannheim, Germany) was purchased from Transasia Bio-medicals Ltd., Solan-172205, India. All other chemicals and reagents were of analytical grade and obtained from LOBA Chemie Pvt. Ltd, India unless stated otherwise. Acarbose tablets (25 mg) were purchased from Bayer (India) Ltd.

Both plant specimens were washed thoroughly with distilled water to remove surface debris and air dried completely. A 10% (w/v) aqueous extract of Z. officinale was prepared by grinding the rhizome using a mortar and pestle. This was kept overnight in a rotatory shaker, after which it was filtered through a muslin cloth to yield an aqueous stock from which different concentrations were prepared for analysis. Similarly, a 5% (w/v) aqueous leaf extract of T. foenum-graecum was prepared by homogenizing in distilled water using a mortar and pestle.

Maltase was extracted from S. cerevisiae using Baker’s yeast granules (PRIME Instant Dry Yeast, India). The yeast was cultured in Yeast Extract Peptone Maltose growth medium containing maltose as an inducer for 18 hours in a rotatory shaker at 37°C. The yeast culture was lysed by sonication using Branson® Sonifier 450 and centrifuged to obtain cell lysate, which was used as a source of crude maltase extract.

The unit enzyme activity of maltase was defined as the amount of enzyme required to liberate one millimole of glucose per minute from the substrate maltose. The maltase enzyme activity was measured by Trinder’s method 21, 22 using glucose oxidase (GOD) and peroxidase (POD). The reaction mixture was prepared by adding different volumes of aqueous plant extracts to 300 µL of crude maltase and 700 µL of 0.2 M sodium phosphate buffer (pH 6.8). To this reaction mixture, 500 µL of 0.277 M maltose solution was added as substrate and then incubated at 37°C for 15 minutes. The amount of glucose liberated from maltose hydrolysis in the reaction mixture was measured using the GOD-POD Diagnostic Kit. The absorbance was measured at 505 nm using a UV-Vis Spectrophotometer (SHIMADZU®, Japan). The percentage maltase inhibitory activity was calculated as: [{1 − Enzyme Activity of Test/Enzyme Activity of Control)} × 100]; the control did not have the plant extract. Acarbose at various concentrations was included as a standard.

The measurement of maltase inhibitory activity for the different concentrations of aqueous plant extract was repeated in six independent assays and expressed as the mean #x00B1; standard deviation. Statistical analysis was performed using an unpaired, two tailed t-test on Microsoft Excel Software. The criterion for statistical significance was at a p value less than 0.05.

The plant extracts showed a significant difference in the maltase enzyme activity from that of the control (p <0.05). The efficacy of maltase inhibition of the plant extracts and acarbose was determined by calculating the IC50. Acarbose showed the highest potency of maltase inhibition with an IC50 value of 0.014% (Figure 1). The aqueous extract of T. foenum-graecum exhibited a higher potent maltase inhibitory activity with IC50 value of 1.05% (Figure 2) as compared to that of Z. officinale with IC50 value of 2.13% (Figure 3). The IC50 of both plants is graphically represented in comparison with that of Acarbose (Figure 4).

An important approach to diabetes treatment involves the regulation of blood glucose levels by delaying the release of glucose into the bloodstream using inhibitors for carbohydrate digesting enzymes such as maltase. In this study, the aqueous extracts of antidiabetic plants, Z. officinale and T. foenum-graecum, were screened for inhibitory activity towards the yeast maltase enzyme. Results indicated that both plants have significant maltase inhibitory activity (p <0.05), and this could be attributed to the presence of phytochemicals in the plant extract. Z. officinale has active phytochemical constituents, which include phenols such as gingerol, terpenoids, and sesquiterpenoids like zingiberine, bisabolene, and zingibrol, and monoterpenoids such as camphene, cineole, geraniol, curcumene, and borneol.23 The hypoglycemic effects of Z. officinale may be attributed to gingerol. Both in vivo studies using streptozotocin induced diabetic rats and in vitro studies have shown that gingerols are responsible for inhibition of alpha-glucosidases, increase in serum insulin levels, reducing blood sugar levels,24,25 and increasing the expression of glucose transporters such as GLUT-4, consequently increasing glucose uptake.26 T. foenum-graecum consists of phytochemicals such as saponins, 4-hydroxy isoleucine, and trigonelline. The seed and leaf extracts have shown antidiabetic properties in diabetic induced rats.27,28 The hypoglycaemic effect of the leaf parts can be attributed to delay in gastric emptying by high fibre content, inhibition of carbohydrate digesting enzymes such as alpha-amylase and alpha-glucosidase.29 and stimulation of insulin secretion.30,31 Inhibition curves for Z. officinale and T. foenum-graecum revealed that there was an increase in the maltase inhibitory activity with increasing concentrations of the plant extract.

The maltase inhibitory activity (%) of varying concentrations of Acarbose. The concentrations (%) selected were 0.005, 0.01, 0.015, 0.02, and 0.025. An enzyme blank and extract blank (control) was prepared for each concentration. The assay was performed five times and the data represent mean ± standard deviation. Acarbose showed the highest potency of maltase inhibition with an IC50 value of 0.014% 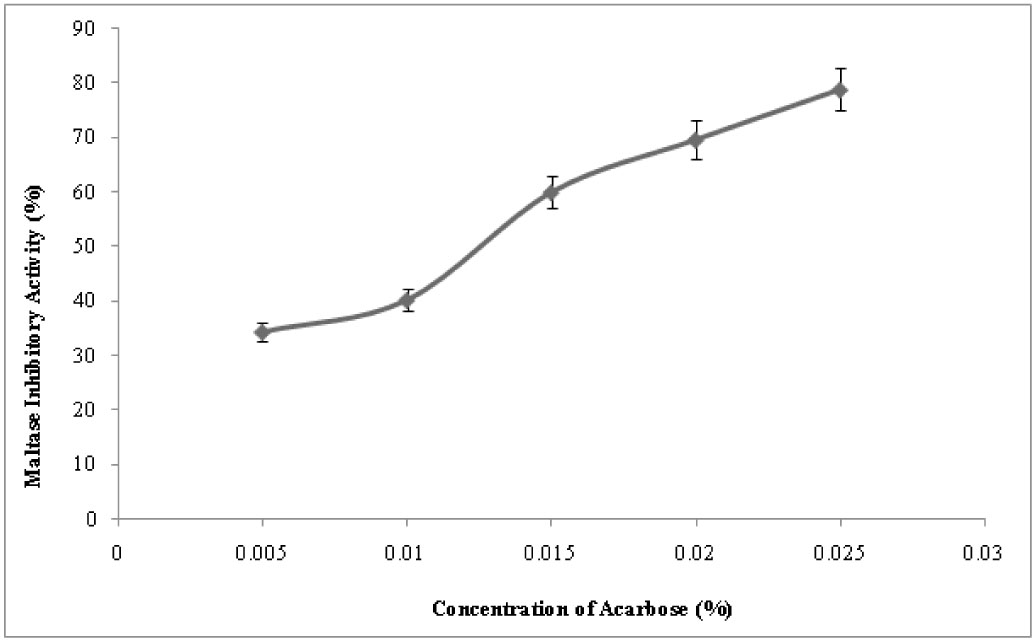 The maltase inhibitory activity (%) of varying concentrations of aqueous leaf extract of Trigonella foenum-graecum. The concentrations (%) selected were 0.3125, 0.625, 0.9375, 1.25, and 1.5625. An enzyme blank and extract blank (control) was prepared for each concentration. The assay was performed six times and the data represent mean ± standard deviation. The aqueous leaf extract of Trigonella foenum-graecum gave an IC50 value of 1.05% 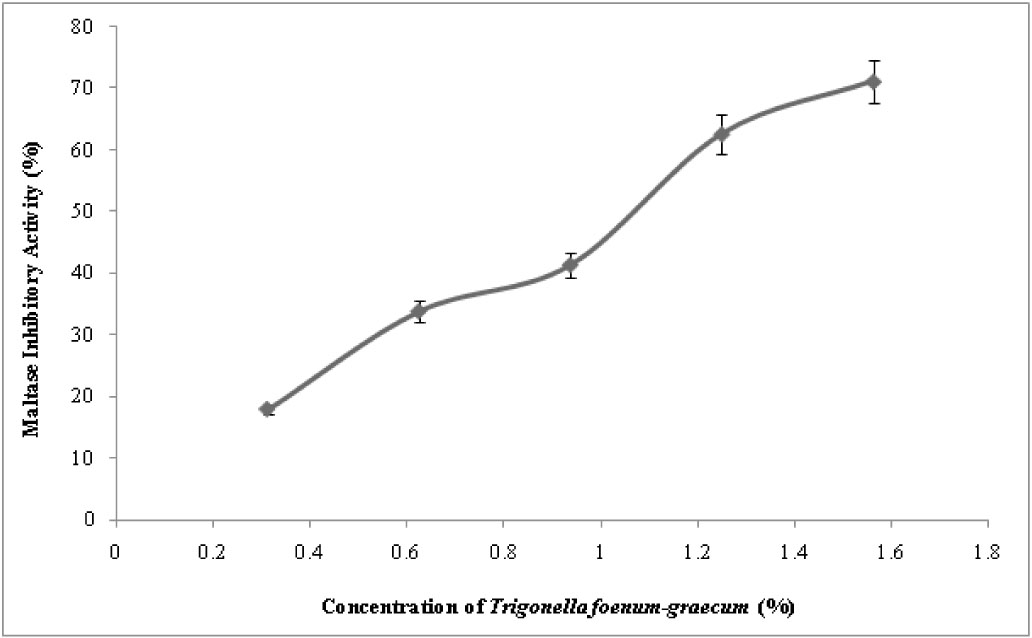 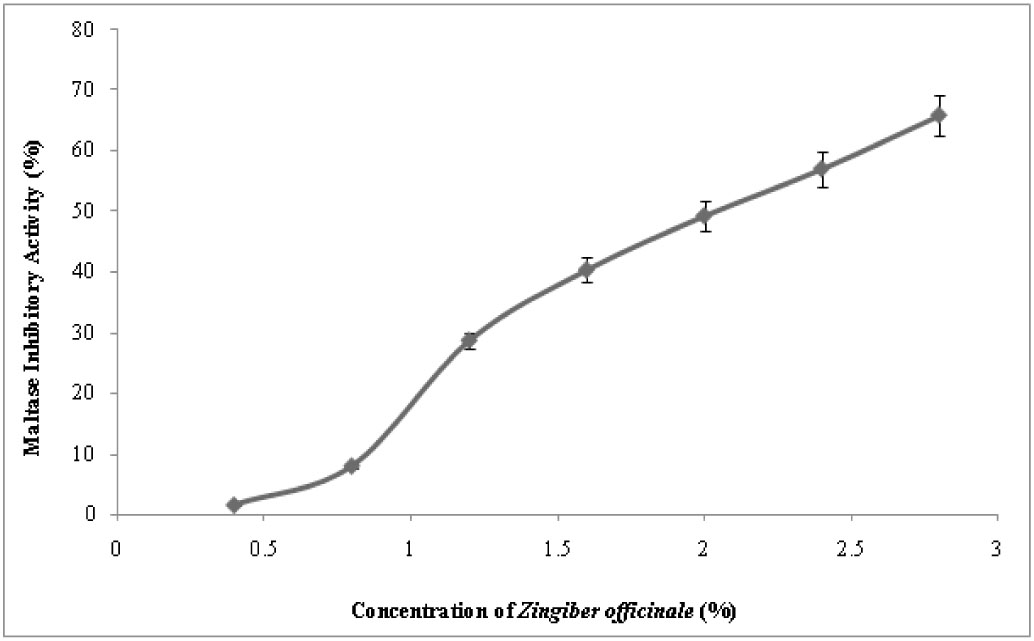 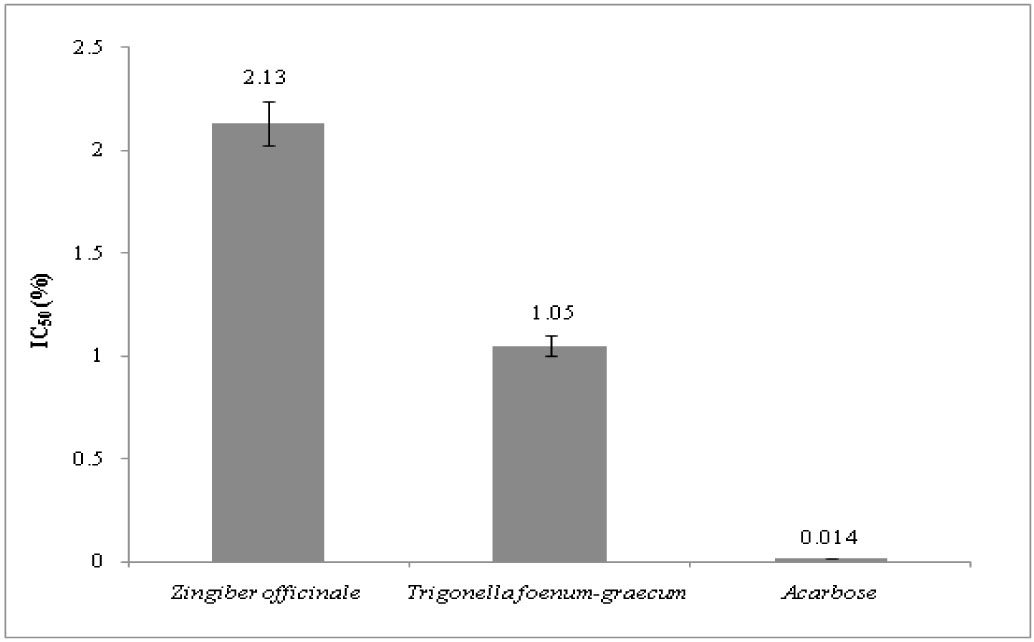 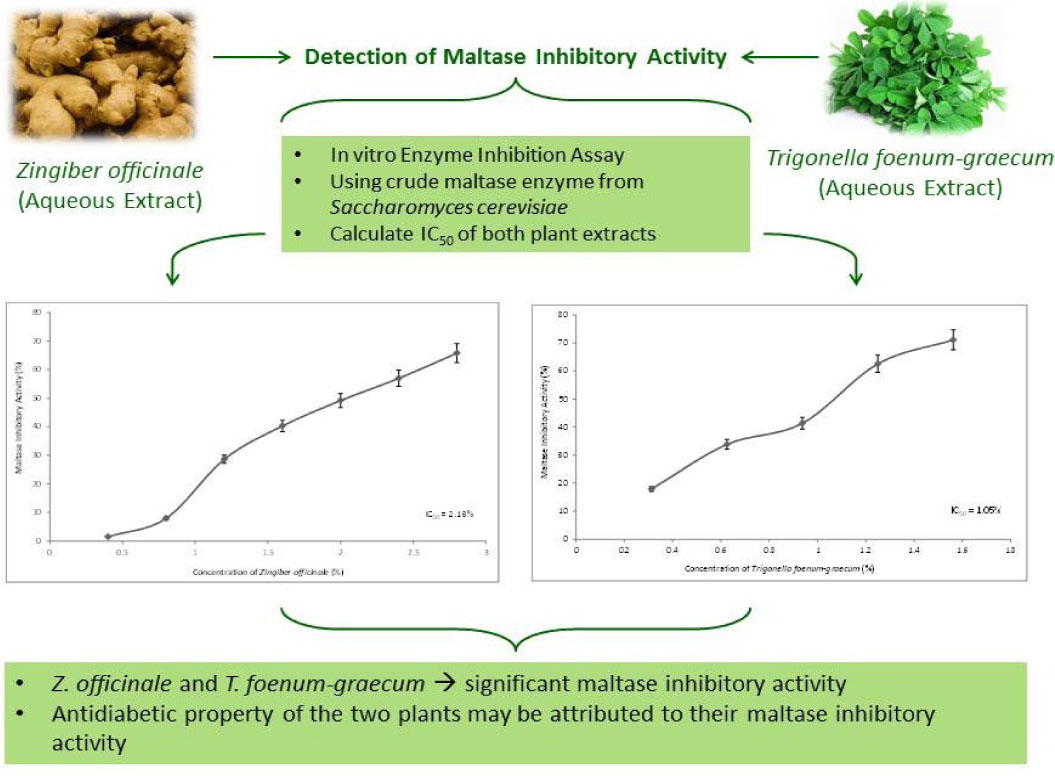 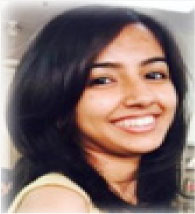 Yamagishi S, Nakamura K, Takeuchi M , authors. Inhibition of postprandial hyperglycemia by acarbose is a promising therapeutic strategy for the treatment of patients with the metabolic syndrome. Med Hypotheses. 2005;65(1):152–4