The Rhizomes of Nardostachys jatamansi D.C (Family Valerianceae) were collected from Haridwar, Uttarakhand.

The Rhizomes have emmenogogue, stimulant, and diuretic and deobstruent properties and are also prescribed in the indigenous system of medicine for the treatment of hysteria, epilepsy, chest pain, convulsions and palpitation of the heart. Its oil promotes growth and blackness of the hair.2 Spikenard oil possesses antiarrhythmic activity with possible therapeutic usefulness for auricular flutter; it is less effective than quinedine but has advantage of being less toxic.2,3 Its Rhizomes have showed anti-microbial activity against bacteria and fungi.10,11,12

The air-dried Rhizomes of N. jatamansi were obtained from Haridwar, Uttrakhand, India. The plant material was identified by Dr. Sunita Garg of NISCAIR, New Delhi and the voucher specimen was submitted their for future reference Ref.No. NISCAIR/ RHMD/ Consult/ 2015/ 2855-48-3.

The air-dried Rhizomes of Nardostachys jatamansi (500 g.) were hydro-distilled according to the method recommended in British Pharmacopoeia, 2009 Figure 4.13 The light pale-yellow oil so obtained was dried over anhydrous sodium sulphate and stored at 4°C in the dark. The yield was 2% based on fresh weight of sample.

The volatile components were identified by comparing their retention indices of GC chromatograph with those of literature. Further identification was done by GC-MS. The fragmentation patterns of mass spectra were compared with those of the spectrometer data base using the NBS 54 AL and Wiley L-built libraries and with those reported in the literature.14,15,16,17,18,19,20 Many constituents were identified by comparing their retention indices with those of authentic standards available in the author’s laboratory (Table 1 and 2).

Chloramphenicol and Ketoconazole were used as standard solutions for comparison of anti-bacterial and anti-fungal activities. Both the standard drugs were taken in DMSO. The concentration of both standard drugs solution was 10 mg. / ml.

The antimicrobial activities of volatile oil and dried alcoholic extract of dried Rhizomes of N. jatamansi were performed in the Department of Microbiology, School of Pharmacy, Sharda University, Greater Noida. The identification of microbial strains was based on morphological, cultural and biochemical tests. The in-vitro antimicrobial activity of various oil concentrations of the N. jatamansi Rhizomes were studied by the cup plate method.21,22,23 Against various microorganisms mentioned in the (Table 3 and Figure 3).

Chloramphenicol and Ketoconazole were used as standard and the activity of each concentration was compared with corresponding concentration of standard drugs. The plates were incubated at 37 ± 2 °C for antibacterial activity and 25 ± 2°C for anti-fungal activity, after 48 h of incubation. The Petri dishes were taken out from the incubator and the anti-microbial activity of different concentrations of oil of N. jatamansi Rhizomes were compared by measuring the diameter of the zone of inhibition (Tables 3 and Figure 3).

The control DMSO showed no inhibition of growth, while all the concentration of oil were effective against E. coli and S.aureus when compared with chloramphenicol and Ketoconazole. The maximum activity was observed with 1% v/v concentration of volatile oil of N. jatamansi Rhizomes.

All the readings were taken in triplicate and statistical analysis were conducted using one-way analyses of variance (ANOVA). The results were represented as means of triplicate readings ± standard deviations (SD). P values < 0.05 were considered significant.

The volatile constituents have been identified successfully by using GC and GC- MS techniques. The essential oil obtained from N. Jatamansi roots is slightly viscous and pale yellowish green with strong odour. The name of volatile constituent, percentage (%), retention index (RI), molecular formula, molecular weight and mass fragmentation index are given in Table 1 and 2 respectively. For antibacterial activity Test Organism i.e. Staphylococcus aureus, Escherichia coli, Candida albicans and Asperigillus niger, zone of inhibition (mm) for three different concentration of volatile oil i.e. 0.1%, 0.5% and 1.0% and two standard drugs i.e. Chloramphenicol and Ketoconazole is given in Table 3 and represented graphically in Figure 3. Molecular structures and GC-MS spectra for the identified constituents are shown in Figure 1 and 2 respectively.

Recently many volatile oils were found to be useful in the treatment of various diseases. The GC and GC-MS analytical techniques were very useful technique in qualitative and quantitative estimation of volatile constituents. The present aim of the study is to identify various volatile constituents and to evaluate their antimicrobial activity. 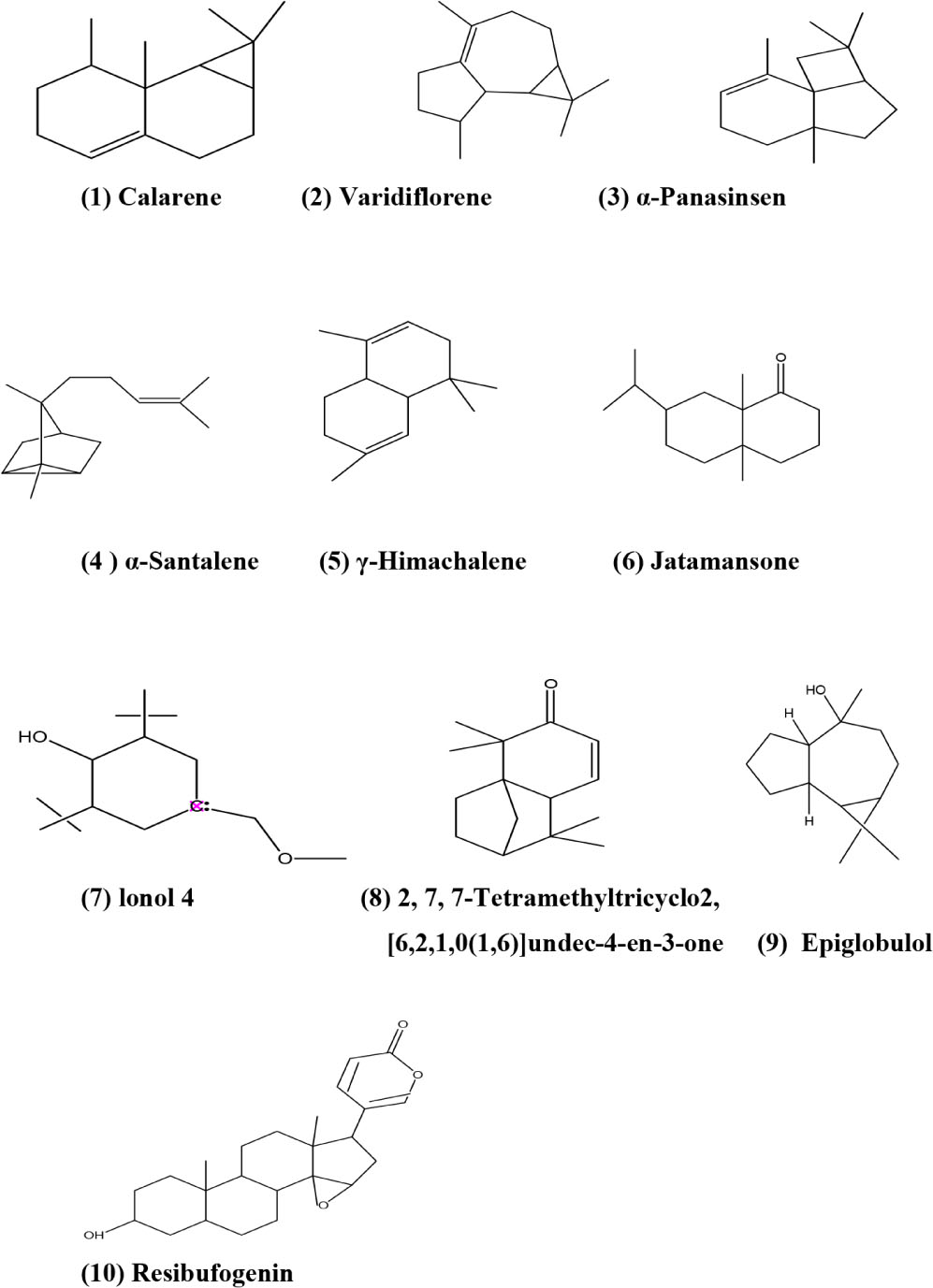 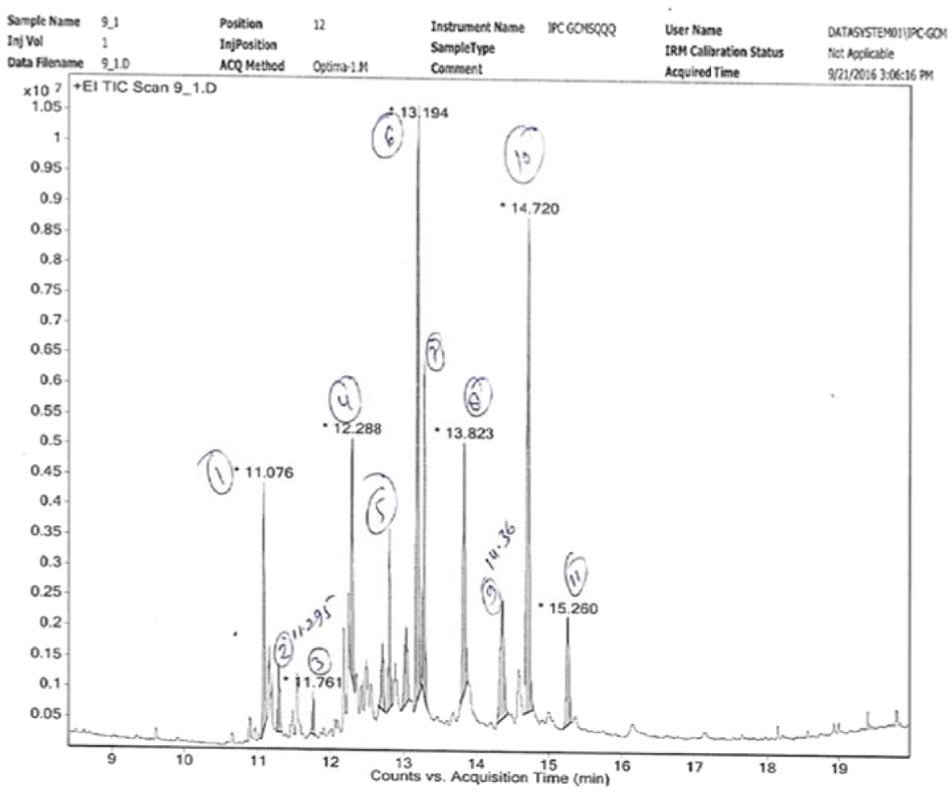 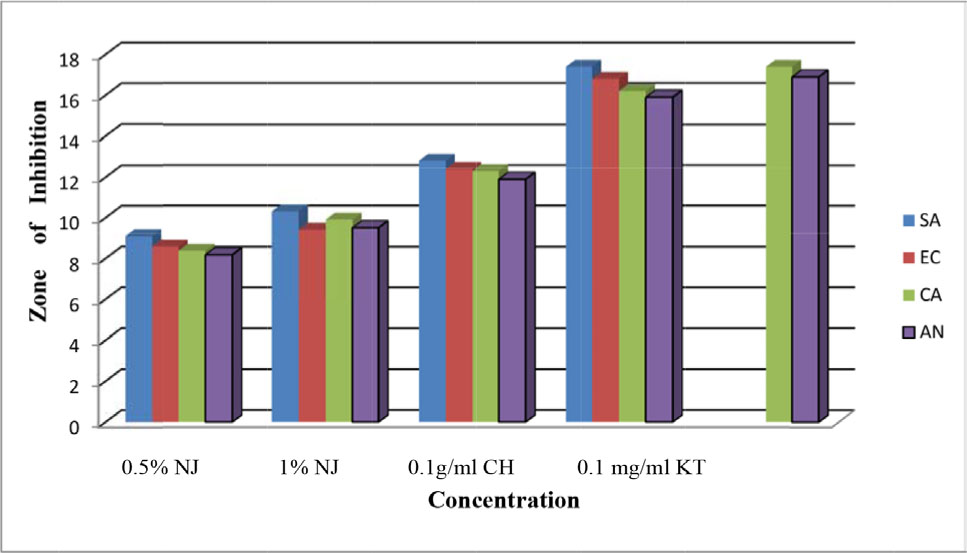 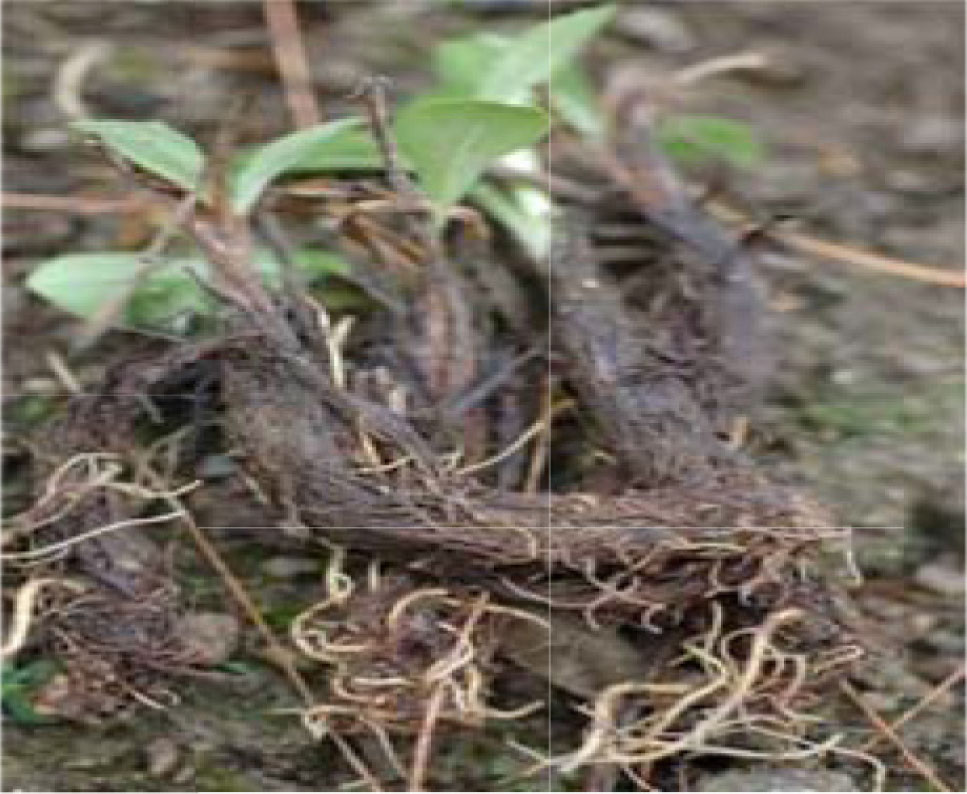 The present study involves identication of total ten volatile constituents. The antibacterial activity shows the highest activity for 1% v/v concentration against Staphylococcus aureus and minimal towards Escherichia coli. While maximum antifungal activity was observed with 1% v/v concentration for Candida albicans and minimum for Aspergillus niger. Further study is required to isolate, identify and elucidate structures of these compounds. 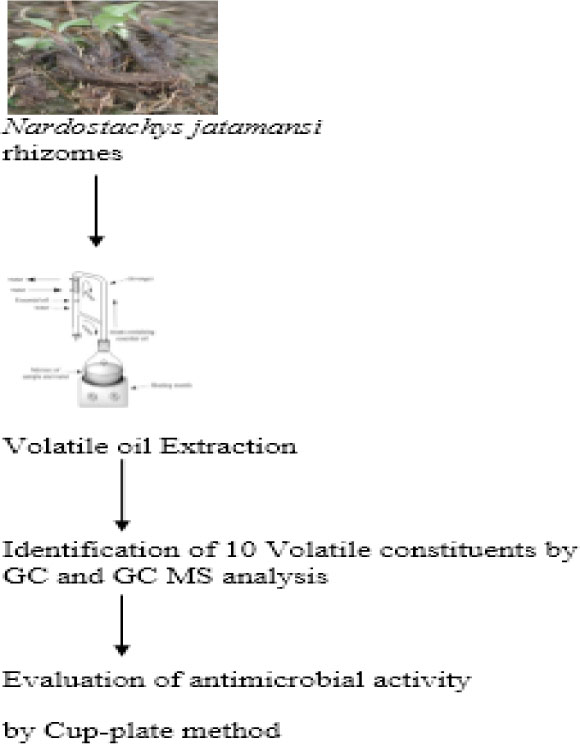 Pharmacopoeia of India. Controller of Publication, Ministry of Health and Family Welfare, Govt. of India; New Delhi: 1996. (2):p. A–105