Plant extracts used in traditional therapy are being reviewed for their chemo protective and Immunomodulatory activities. Immunomodulators are biological response modifiers; exert their antitumor effects by improving host defence mechanisms against the tumor. They have a direct anti-proliferative effect on tumour cells and enhance the ability of the host to tolerate damage by toxic chemicals that may be used to destroy cancer.

Immunomodulatory therapy could provide an alternative to conventional chemotherapy for a variety of diseased conditions, especially when host’s defence mechanisms have to be activated under the conditions of impaired immune responsiveness or when a selective immunosuppression has to be induced in a situation, like inflammatory diseases, auto-immune disorders and organ/bone marrow transplantation.1 A number of Indian medicinal plants and various ‘Rasayana’ have been claimed to possess immunomodulatory activity.

Boerhavia erecta (L.) (Tamil name: Seemai mookarattai) is a weedy herb of the family Nyctaginaceae and is commonly available in almost all places. It is used as a traditional medicinal plant in Africa.2 Boerhavia erecta (L.) possess alkaloids, flavonoids, saponins, steroids etc., and more polar compounds like minerals and vitamins.3 It has been found to possess diuretic action,4 anti-inflammatory,5 antifibrinolytic,6 anticonvulsant 7 and hepatoprotective activities8,9 antimicrobial activity,3 antimalarial activities.10 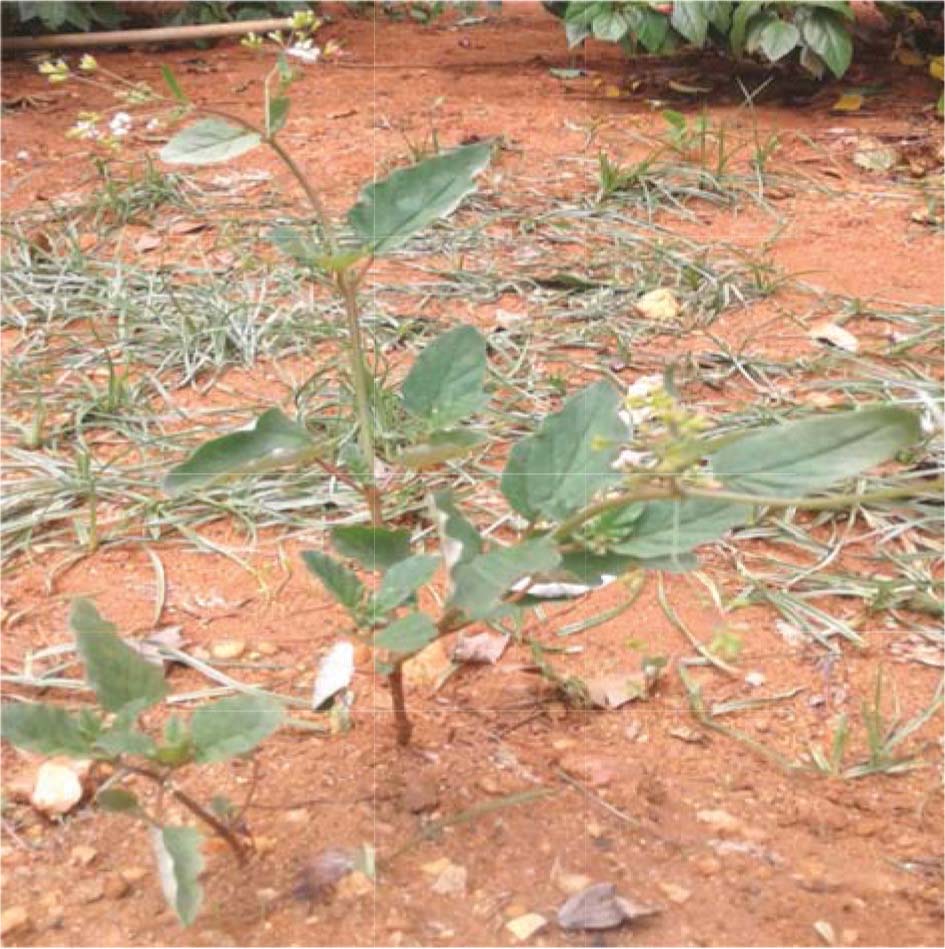 The whole plant of Boerhavia erecta was collected from the outskirts of Tiruchengode, Tamilnadu in the month of March 2017. The plant was then authenticated by the Dr. S. Senthil kumar, Head of the Department of Botany, Vivekanandha College of Arts and Science for Women, Elayampalyam, Tiruchengode. A voucher specimen was submitted at Institute’s herbarium department for future reference. The whole plant material was dried in shade and pulverized. The powder was passed through sieve no. 40 and used for the extraction.

In this process, the whole plant of coarsely powdered crude drug was placed in a stoppered container with the distilled water and allowed to stand at room temperature for a period of at least 3 days with frequent agitation until the soluble matter has dissolved. Then, extract was filtered by using muslin cloth followed by Whatman no. 1 filter paper. The extract was subjected for concentration by using vacuum flash evaporator at 90°C. Finally, the syrupy mass was collected and used for the experiment.

The above prepared extract was subjected to qualitative chemical analysis to detect the presence of various phytoconstituents by using standard procedures. The results were tabulated in Table 1.

Phagocytosis of Candida albicans test was carried out according to method described by Ponkshe and Indap 2002.

Sabouraud broth was prepared for the present work by dissolving 30.0g of Sabouraud broth (containing 10g/L and dextrose 20g/L) (HiMedia) in 500ml of distilled water. The broth was further sterilized (autoclaved) at 121°C for 15min at 15 lbs pressure and was used according to the protocol.

Reagents and their preparations

Giemsa stain for the present study was prepared by adding 0.67ml of Giemsa stain (HiMedia - SO11) in 30ml of distilled water.

Sabourauds broth was inoculated with Candida albicans (MTCC 183) and was incubated overnight. The overnight culture of Candida albicans was centrifuged to get the pellet and supernatant was removed. The collected pellet was washed with Hank’s balanced salt solution and centrifuged again. This was done for 3-4 times and the final pellets was mixed with a mixture of sterile Hank’s balanced salt solution and human serum in proportion 4:1. The concentration of 1X108 cells was used in present work.

In - Vitro Immunomodulatory Activity of Aqueous Extract of Boerhavia Erecta 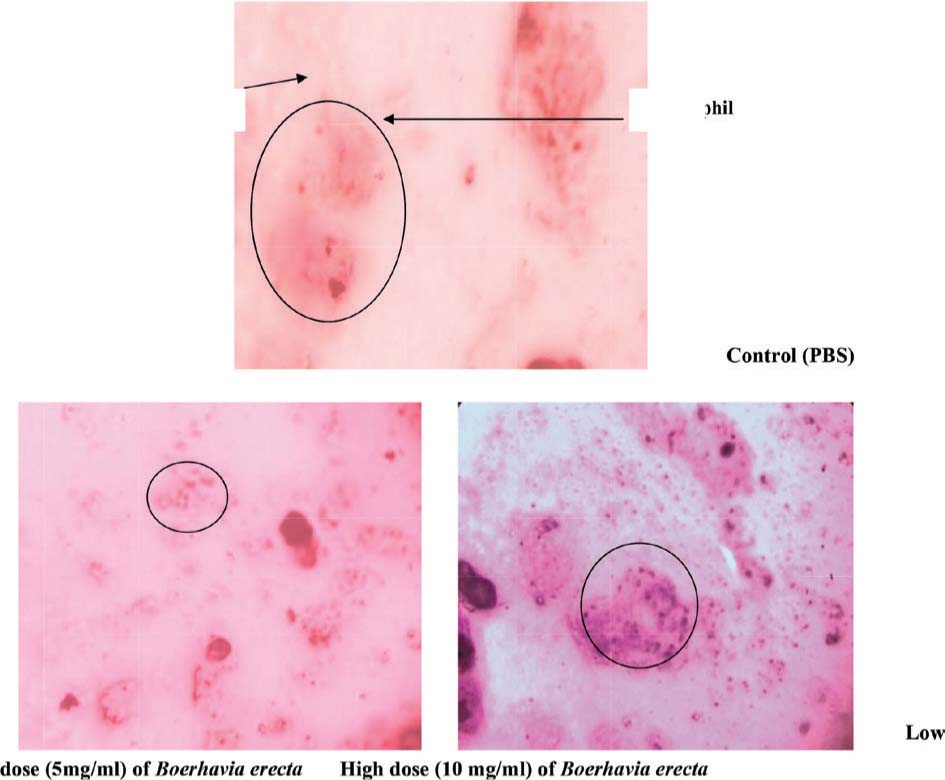 Briefly, by using finger prick method human blood was added onto the clean glass slide and was incubated at 37°C for 25min for clotting. Normal sterile saline was further used to remove the clot, in such a way not to wash the adhered neutrophils. 100µl of different concentration (5mg/ml and 10mg/ml) of test plant extract was added on to adhered neutrophils and was incubated at 37°C for 15min. This was followed by addition of predetermined concentration of Candida albicans suspension and incubated at 37°C for 1h. The slides were then drained, fixed using methanol and were stained with Giemsa stain. The number of Candida albicans cells phagocytosed by a human neutrophil on the slide was determined microscopically using morphological criteria. The number of Candida cells phagocytosed/engulfed by a neutrophil was taken as phagocytic index (PI) and the study was performed in triplicates.

Immunostimulation was calculated in percentage using the following equation.

Where, PI of samples: Phagocytic index of the test plant extract, PI of control:

Phagocytic index without the test plant extract (i.e. normally by neutrophils). Values were represented in Table 2 and Figure 2 and 3.

In - vitro immunomodulatory activity of aqueous extract of boerhavia erecta. 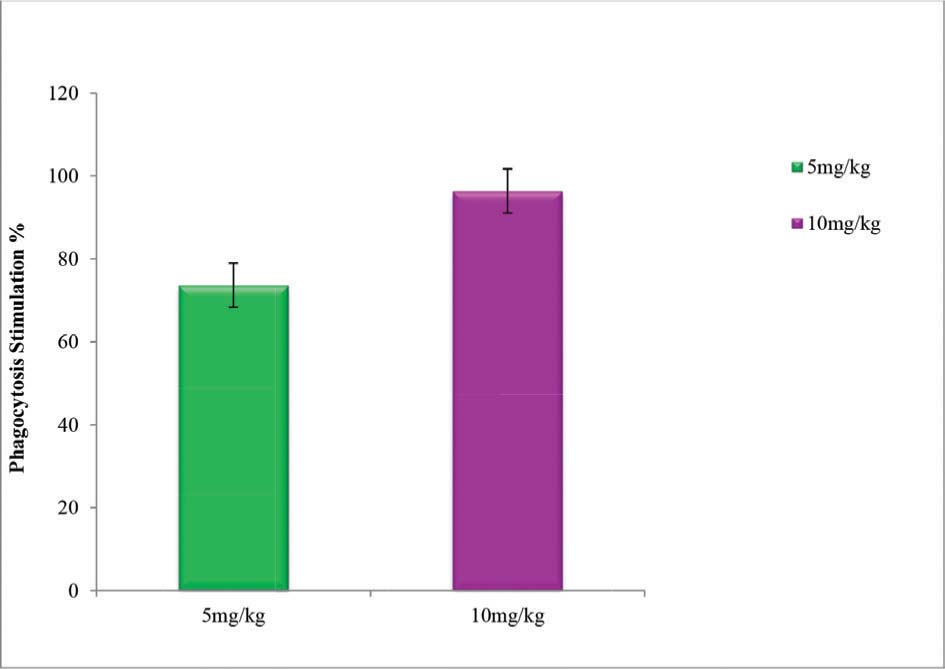 Data presented as mean ± Standard Error Mean (SEM) and were analysed by One-way analysis of variance (ANOVA). The values were considered significantly different at P<0.05.

Synthetic drugs are usually associated with various side effects. More attention is affected by the increasing problems of development of resistance in infectious disease against synthetic drugs. The best alternatives over modern synthetic drugs are plant derived medicine. In this study, aqueous extract possessed significant immunomodulatory activity. The number of Candida albicans cells phagocytosed/engulfed by a human neutrophil on the slide was determined microscopically using morphological criteria.

In conclusion, aqueous extract of Boerhavia erecta showed more significant immunomodulatory (Phagocytosis stimulation). In case of unspecified microbial infection this potent plant extract is much beneficial and nontoxic as compared to the synthetic medicine. It might be concluded that, plant extract possessed phagocytosis stimulatory potential may be due to the presence of alkaloids as per literature. Further isolation and characterisation of phytoconstituents and in-vivo evaluations are undertaken to explore this plant as phytomedicine against pathogenic microorganism.

The authors are thankful to management, Swamy Vivekanandha College of Pharmacy, Tiruchengode, Tamilnadu, India for providing necessary facilities and support to carry out this research work.

[2] Conflicts of interest CONFLICT OF INTEREST The author declare no conflict of interest.