To investigate the antiepileptic effect of homeopathic remedy Nux vomica on mice and its comparison with standard therapeutic diazepam.

BALB-c mice were taken and divided into three groups comprising ten mice in each group. The first group was treated as control; the second group received standard therapeutics (diazepam, i.p.) and the third group received Nux vomica CH7. All groups were treated with strychnine intra peritoneally. Following parameters were observed; start time of convulsions, the number of animals had convulsions, and survival time until death.

Our study demonstrated efficacy of Nux vomica in epilepsy management.

Epilepsy includes various neurological disorders in which neuronal activity get disturbed resulting in severe agitation and convulsions.3,4 One specific type of convulsions, affecting both hemispheres of the brain is the Tonic- Clonic seizures that include a Tonic phase of 10-30 sec;5 during this period, retrenchment of limbs is observed that is followed by their extension. This phase is followed by a Clonic Phase in which limbs shake in unison.

Epileptic agent strychnine has been demonstrated to bind and block these receptors and hence inhibits IPSP. It results in contraction of all skeletal muscles, including the diaphragm for extended duration. As a result diaphragm cannot relax, the victim cannot inhale, and suffocation occurs.6

Treatment of epilepsy in conventional therapy includes therapeutics like midazolam, lorazepam, phenytoin and diazepam. Diazepam is a medication of the benzodiazepine family that is commonly used to treat a range of conditions including anxiety, alcohol withdrawal syndrome, benzodiazepine withdrawal syndrome, muscle spasms, seizures, trouble sleeping, and restless legs syndrome.7

Protective action of diazepam against strychnine-induced seizures is attributed to its positive effect on GABA-mediated IPSC.8 but usage of diazepam has been reported to show side effects like sleepiness and trouble with coordination.9

Homeopathic system is a holistic system of therapy but since its inception, it received severe criticism from scientific community due to non-measurable amount of drug substance in the homeopathic dose. Still homoeopathy has benefitted globally millions and billions of people, a fact that does not require any citation. In case of epilepsy management, there are several homeopathic remedies reported in scientific publications as well as homeopathic literature.10,11,12,13 Homeopathic remedy Nux vomica has also been reported to affect entire gray matter of the Cerebrospinal Nervous System (CNS), especially centering upon tubular gray matter of pons, medulla, and cervical portion of spinal cord.14

Strychnine (SIGMA), Nux vomica 7CH in 40% alcohol (B. Jain Pharmaceutical Pvt. Ltd) and diazepam (ALPA Laboratories Ltd) were procured and used in this study. Selection of Nux vomica potency CH7 was based on the previous study of Alecu et al.12

6 animals were taken and divided into two groups: In the first group, 50 µl Nux vomica homeopathic preparations was given intraperitoneally while in the second group it was given sublingual orally. All animals died within 10-15 min after intraperitoneal injection while no change was observed in the oral group. Thus, oral administration of Nux vomica was used for further pharmacological studies.

30 BALB/c male mice, without associated pathology, were divided them into 3 groups of 10 animals each. All the mice were kept on overnight fasting before conducting the experiment. In all the groups strychnine poisoning was caused by administering strychnine 0.8mg/kg body weight intraperitoneally and following protocol was designed according to the standard procedure.15

This group was treated as negative control group; it received saline intraperitoneally as placebo 1 h before administration of strychnine and 40% v/v alcohol immediately after it orally.

It was positive control group; it received diazepam (standard therapeutic) 5 mg/kg body weight intraperitoneally 1 h before administration of strychnine and 40% v/v alcohol immediately after it.

Immediately after the administration of strychnine, animals were observed for the following symptoms

Number of animals had convulsions, 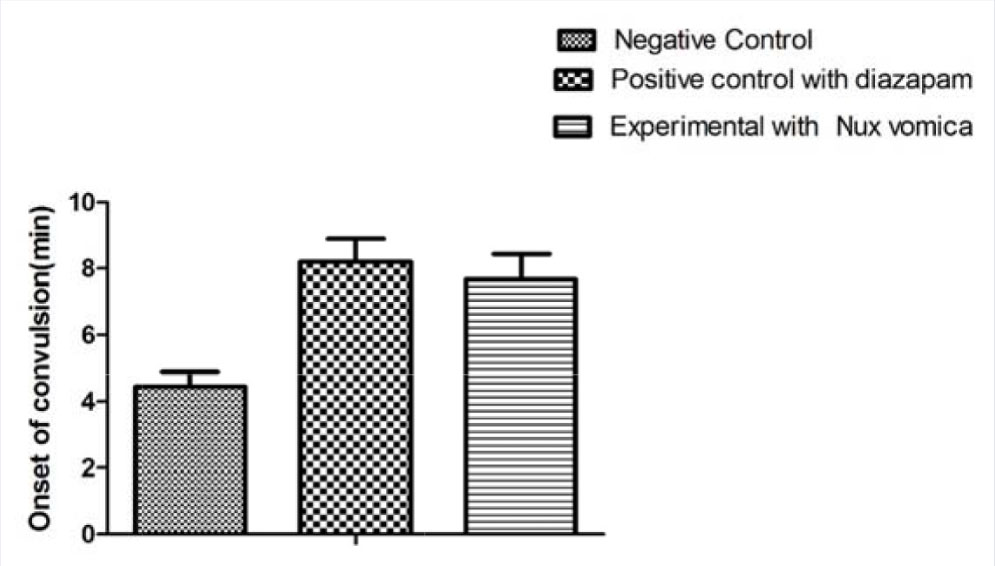 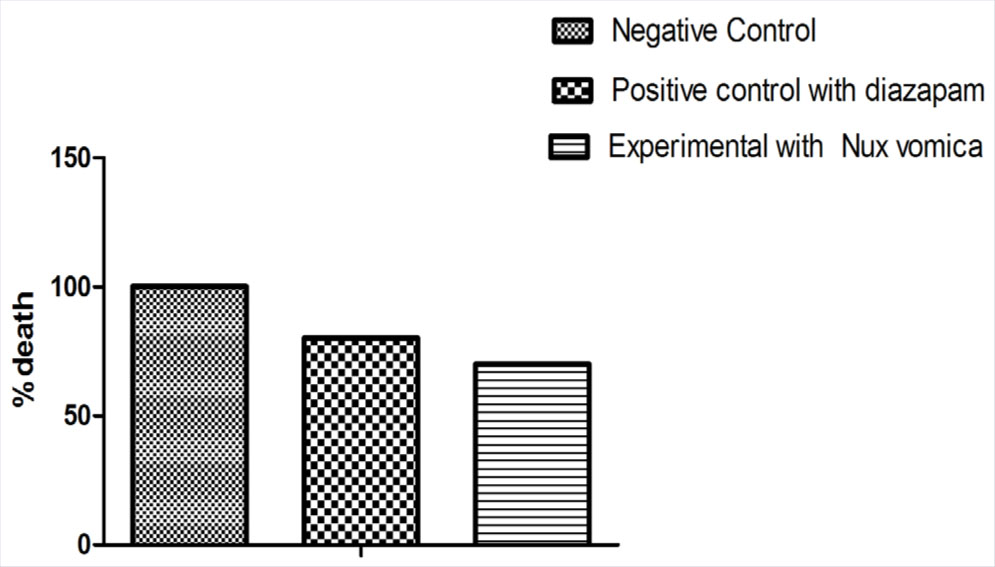 Effect of Nux vomica on time duration until death. 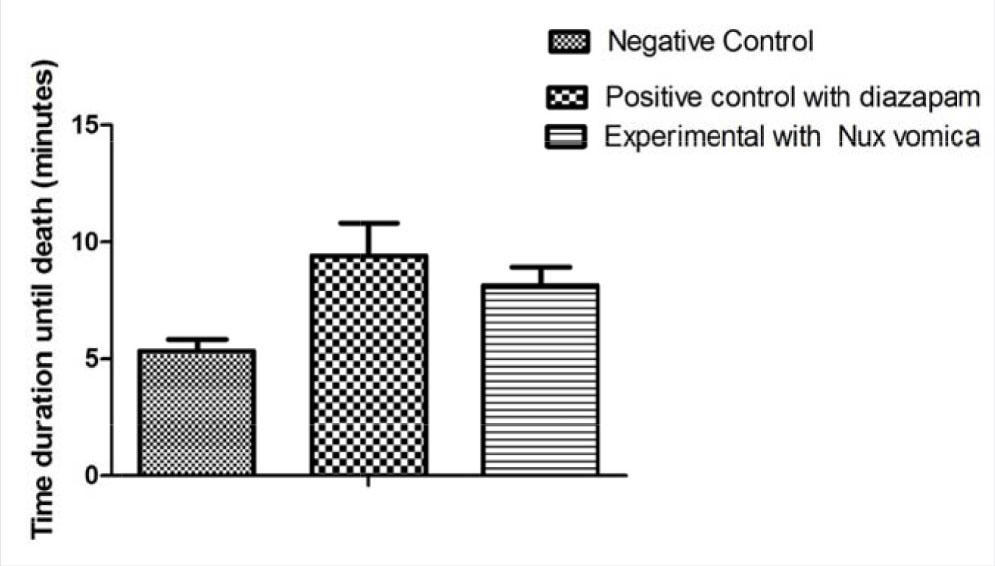 Effect of Nux vomica on Time duration until death

Diazepam acts as a positive allosteric modulator of GABA, it is administered as pretreatment. As it was not known whether Nux vomica is more effective as prophylactic or therapeutic, therefore, it was given as post treatment of strychnine. Probable mode of action of homeopathic medicines might be gene expression modulation, through signal transduction pathways. Due to the ultra-high dilution, it is more likely that homeopathic medicines act as physical signal rather than a chemical signal to invoke these signal transduction pathways.16 Our experiment clearly demonstrated that Nux vomica CH7 was significantly more effective in delaying and even preventing seizures caused by strychnine in comparison to control animals; time to death was also extended significantly in Nux vomica treated group in comparison to control treated animals. The protective action of Nux vomica was found to be stronger than diazepam. % survival was 10% higher in Nux vomica treated animals as compared to diazepam group.

Research in homeopathy is a challenging task owing to lack of proper understanding of Modus-operandi of homeopathic medicines in accordance with “Law of Similia”. Another problem that comes into way is “Law of the Minimum Dose and Potentization” that makes it difficult to conduct pharmacodynamics and pharmacokinetics studies due to the use of ultra-high dilutions beyond Avogadro number. Animal experimentation poses a further challenge in devising strategies to incorporate, “Law of Individualization” of Homoeopathy in study design. All these facts may account to poor reproducibility of experimental results across similar studies. We hypothesize that probable path toward the elucidation of the mechanism of action of homoeopathy should follow the steps; 1. Repeated animal experiments to verify the efficacy of a particular medicine against a disease and 2. Formulating strategies to analyze transcriptome profiles between case-control groups as it has been reported previously that transcription inhibitors, Actinomycin D counters effect of homoeopathic medicines.17,18 so it is highly likely that homeopathic medicines act through modulation of gene expression. Our present study is the first step toward this objective.

Results of our study clearly indicate the efficacy of Nux vomica on strychnine induced neurological disorder leading to death. It was found statistically significant in protecting the animals. Our study opens an area for further research for the mechanism of action of this medicine.

Financial support by Ministry of AYUSH, Govt. of India, New Delhi is duly acknowledged. We are grateful to Dr Geeta Rani Arora, B. Jain Pharmaceutical Pvt. Ltd. New Delhi, for providing the homoeopathic preparation of Nux vomica CH7 for the experiments. The authors are highly thankful to Vice Chancellor, and Director, IAH, GLA University, Mathura for providing infrastructure and animal house facility. 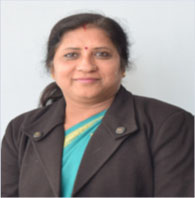 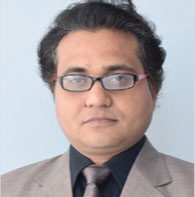 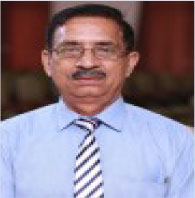 Prof A.K. Bhatia: Is Head of the Biotechnology dept in the same university. He has vast experience of teaching and Research. He is M.V.Sc; Ph.D. in Microbiology.

[1] Conflicts of interest CONFLICT OF INTEREST Authors have no conflict of interest.