The world health organization report says the immunity deficiency is the biggest problem in the all over the world. Immune system can be improved through many fruits, especially grape is inevitable fruit that provides high neutrinos. The grape contains phytonutrients, Phenols and Poly phenols in rich amount. It is used for constipation, indigestion, fatigueless, kidney disorder, Macular degeneration and cataracts. The graph seed reduces swelling, Eye disease caused by diabetics and acting as antioxidants. In the research article, plenty number of classifiers were used to identify good type of grapes that provides the above said. The methodology applied in the work were Ada Boost and Machine learning Meta algorithm. The above areas were reviewed to the core..

The graph provides high protein, vitamins and minerals to the body for the improvement of immune system. It is one price worthy fruit that enhances fiber, hydrate the body gives healthy carbs acting as nan antioxidant, provides moderate proteins and myricetin. The flavanoids and quercetin will reduce the damage to the body caused by free radicals.

In the grape has got essential minerals like potassium, calcium, magnesium, phosphors and sodium are the good electrolids. The Vitamins like K, A, C and B6, moreover thiamine, riboflavin, niacin and folate provides good immune system to the human body. A grape cures disease like Asthma, Bone weakness, Heart disease, Migraine problems, reduces blood cholesterol, acting as an antibacterial, avoids breast cancer, reduces risk of Alzheimer and improves immunity to the body.

Grapes are one of the common fruit in the world and that can be growing.1 in the cluster of 15 to 300m. According to food and agriculture organization, the grape cultivation is processed needs a lot of people to do the work and its lead to more time-consuming, and labor- intensive.2 process for cultivation and harvesting. The method is used for automatic harvesting is based on artificial vision, computer vision. The Vineyard images3 can be further divided into RGB color components. Using color images, the features can be extracted and preprocessing with4 similar color component methods. RGB images is used for capturing the grape bunches at night under the light conditions. The conventional RGB color images can be transformed the different color spaces with values of HSV, YIQ, with intensity values of a particular images. To detect a fruit color skins.5,6 the pixel color, intensity distance can be measured by the linear color model. To avoid an illumination variability at night time, the segmentation procedure is used. The segmentation technique for each pixel images based on applying Bayesian Discrimination models. The results were stored in the LUT (Look up Table) to perform a segmentation process in faster manner. In cluster detection can be carried out with the various classifiers and segmentation algorithm was proposed here.7,8 Support Vector Machines are supervised learning that can be analyzed data used for classification.9,10

Two sets of an experiment can be carried out for new boosting algorithm first one is comparing boosting and bagging. This bagging method is also known as Bootstrap Aggregating which is a machine learning ensemble with Adaboost algorithm which is used to design for improving a stability and accuracy.13 The boosting algorithm was developed with new versions to be denoted as Adaboost.M1, AdaboostM2.

Diagrammatic Representation for Vineyard Detection and with Various Classifiers. 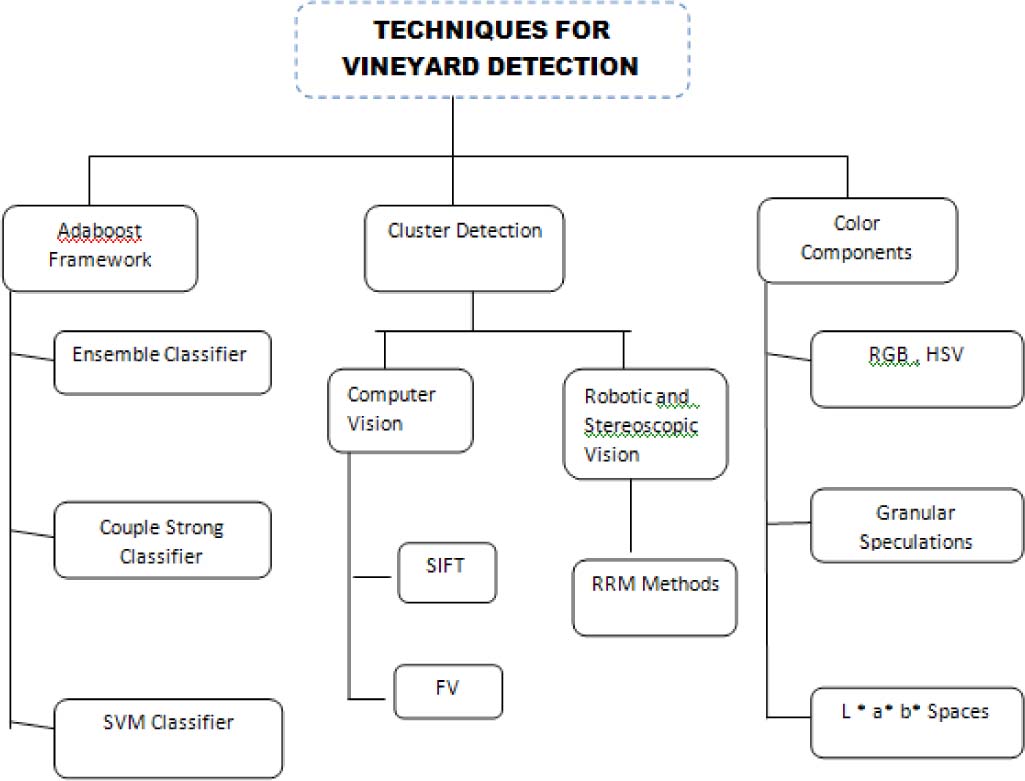 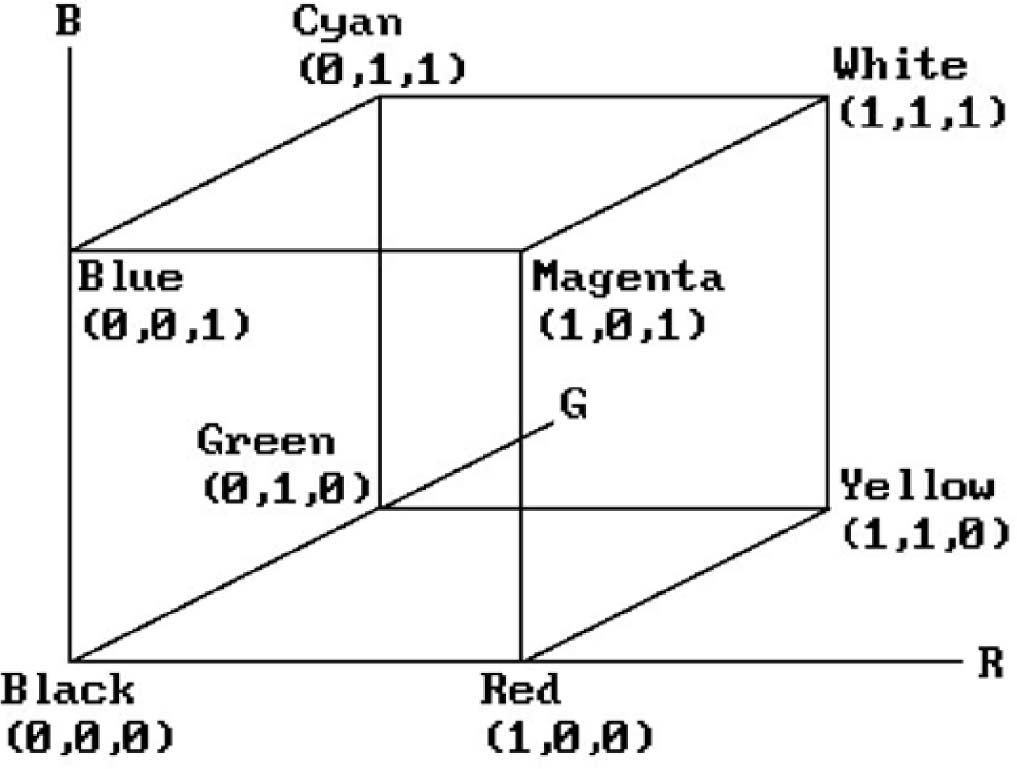 Color Components of both Linear and Non-Linear Transformations.

Bagging method is used for combining the multiple copies of learning datasets. The performance of the learning algorithm combines AdaBoost with the nearest neighbor classifiers. Strong classifiers are used in the AdaBoost framework where weak classifiers are connected in either sequential or parallel in it.14

To improve the weak classifier the algorithm can be used as CSCs- Coupled Strong Classifiers. The CSCs concept is based on the following as ACCFs (Aggregated Channel Comparisons Features) and LDCFs (Locally De- Correlated Channel Features).15,16 Pedestrian Detection is a method of detecting any intelligent video surveillance systems, by using this application CSCs in AdaBoost can be implemented. This detection which improves the performances about 8% of miss rate and means rate to improve the further enhancement of AdaBoost framework.17,18

In this survey the automatic detection and visions for various plants are discussed here. Now a day’s Automatic detection is still a challenge for a harvesting the robot. A major challenge for a robotic harvesting can be explained in three issues: fruit images recognition by RGB19,20 hand-eye images for coordination.and end-effectors. computer vision can be used for the analysis and understanding the useful information for either a single or sequence of images. The precision agriculture plays a vital role in the growth of the heading stage of the wheat plants. In this paper the automatic observation for wheat heading stage is based on computer visions. Heading stage is the stage when the panicle is fully visible so that heading can be low spatial resolution images it was observed by SIFT (Scale Invariant Feature Transform) and FV (Fisher Vector).23,24

Stereoscopic vision stereo- meaning “solid”, “appearance of sight”. Automatic fruit detection by using a laser-based computer vision. In this paper infrared laser is used for finding ranges and reflectance images in the fruit harvesting. In stereo vision main difficulties that can be focused in this paper is stereo matching and cross correlation functions.25

The circle shape of the apples can be detected based on RRM (Random Ring Method), the radius of the apple can be determined by the center of the apple. Segmentation of the apples based on recognizing with the certain range of (30-360) degree pixels during shooting distances from the camera.

Another technique of fruit detection by recognition for robotic harvest based on feature image fusions. Tomato was collected and performed by using image acquisition method by taking 200 samples of images.

These images can be extracted by using color feature extractions (RGB, HSV, L*, a*, b*) color components done by wavelet transform by an orthogonal set of images.26,27

The color segmentation is play an important role in detecting and partitioning the digital images into various multiple segments. Each Segmentation was assigned with different pixel images.

The color images can be segmented towards 4 segmentation techniques with a color features, in this paper introduces the segmentation process for developing fruit images to provide the histogram values based on predicting with a neural network.28

In the reference29 surveyed segmentation algorithms based on threshold and to perform the values on segment using uniformity and shape measures.

The Color for detecting the various color spaces such as R(red), G(green), and B(blue) which is used for finding the grape images with the three primary colors. R, G, B representation, can derive the various by either it can used for transformation process of both linear and nonlinear transformations.

YIQ is used for encoding the TV signal for American system in a color space systems. The values that are provided through different color components such as YUV, HSV, HIS, YUI.30

The paper depicts the application of vineyard detection in different classifiers and it can be hybridized with other machine learning algorithms to achieve better accuracy. The performance analysis of the color features of grape bunches should be improved in future work The study has presented a comprehensive literature review of vineyard detection that focuses mainly on grape detections. As more research in the area, there is a need for a more recent literature review on the subject to and in the vineyard development field.

Smart RE , author. Principles of grapevine canopy microclimate manipulation with implications for yield and quality. A review. American Journal of Enology and Viticulture. 1985;36(3):230–9

Journal:
Pharmacognosy Journal
‹ Pharmacognostic Studies of <italic>Psychotria rubra</italic>(Lour.)Poir up A Comparative Study on Internet of Things (IoT) and its Applications in Smart Agriculture ›