Shankha draavaka is a unique preparation explained in classics for ashtavidhashoola (eight types of shoola), agnimandya (anorexia) and grahaniroga (sprue). It is widely indicated in all types of shoola i.e. shoolam-ashtavidham-hanthi (alleviates eight types of pains). The two prominent indications of shankha draavaka are annadravashoola and udarashoola. They are usually co-related with gastritis and colic pains respectively. These two complaints are quite common in day today practice. Taking into account, these two prominent indications of shanka draavaka, this research work was taken up to revalidate the medicinal effects of shankha draavaka.

With a motto to assess anti-secretory and acid neutralizing effect of shankha draavaka the experimental study was taken up. In the beginning, the selected albino rats were categorized into 3 groups viz. control group (fed with distilled water), standard group (administered with ranitidine, the standard drug) and test group (administered with shankha draavaka 0.054 ml / 200 g body weight). 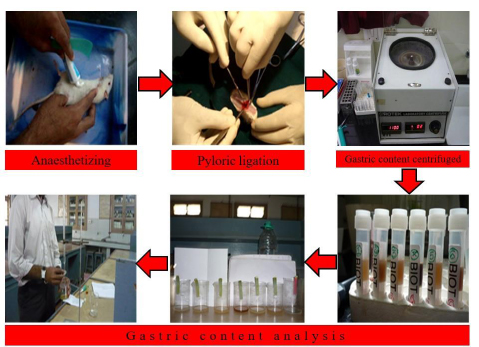 The medicine chosen for the study is shanka draavaka (prathama) from the classical book Rasa tarangini.[1] It is indicated in annadrava shoola (gastritis) and udara shola (colic pains). This medicine comes with ingredients such as Shuddha shankha (conch shell), Tankana (borax), Sphatika (potash alum), Yava kshara (potassium carbonate), Svarji kshara (sodium bicarbonate), Navasaadara (ammonium chloride), Saindhava lavana (sodi chloridum), Samudra lavana (sodi muras), Vida lavana (black salt), Souvarchala lavana (unaqua sodium chloride), and Romaka lavana (lake salt). Though shanka draavaka is a prominent classical formulation; in easily administrable liquid form with a dosage range of 5 to 16 drops in humans, presently no pharmaceutical company is manufacturing and marketing it. Perhaps it is because of less demand from the practitioners of Ayurveda. To make the formulation more practitioner user friendly, revalidation of its scientific base is necessary.

Kshareeya dravya and lavana dravya that feature in shankha draavaka, find either direct or indirect references in Charaka samhita[2], Sushruta samhita[3] Ashtanga Hridaya[4], Dhanvantari nighantu[5] Raja nighantu[6] and Bhaishajya ratnavali[7]. From Rasa tarangini. Gastro-intestinal ailments, such as gastritis (annadrava shoola) and colic pain (udara shoola), which are the primary indications of shanka draavaka are seen more in this era of stressful life and jumbled food habits. Thus, an attempt is made in this study to assess the anti-secretory and acid neutralizing effect of shanka draavaka through animal model (pyloric ligation- induced acid secretion and ulcer formation) studiesanti-secretory and acid neutralizing.

The raw drug procurement and the pharmaceutical preparation of the test drug i.e. shanka draavaka were carried out in SDM Ayurevda Pharmacy Udupi, a GMP certified pharmacy.

As a part of experimental study[8], after due written approval from the Institutional Animal Ethical Committee formulated in the SDM Center for Research in Ayurveda and Allied Sciences, Udupi, the experimental animals were obtained from Animal house attached to the Pharmacology laboratory. The Ranitidine tablets were used as the standard drug in the dosage of 15 mgs / kg body weight that ranges in between 3 to 3.75 mgs. Inj. Ketamin hydrochloride, NaOH (0.01N), Topfers reagent and collodion were used for anaesthetizing the rats. The equipment used were dissecting microscope, pH strips, burette and surgical equipment.

On 6th and 7th day along with fasting (but had free access to water ad libidum) the standard drug and the trial drug were administered to the respective groups. The fasted rats were anaesthetized with 0.5 cc of ketamin hydrochloride injection.

The rat was secured on the operating table. An incision of 1 cm long in the abdomen just below the sternum was given. The stomach was exposed. A thread was passed around the pyloric sphincter and a tight knot was applied. Care was taken while putting the knot, in such a way that no blood vessel is tied along the knot. The abdomen wall was closed by putting the sutures. The skin was cleaned from any blood spots and bleeding. Collodion was applied over the wound. Then the rat was kept in a separate cage and allowed to recover. For the standard and trial group after 1 hour of administration of respective drugs, pyloric ligation was done as described earlier. After 4 hours of pyloric ligation the animals were sacrificed by inhalation of chloroform.

The abdomen was opened and esophageal end (cardiac end) of the stomach was tied. The entire stomach was Cut and removed from the body of the animal. A small cut was given to the pyloric region just above the knot and the contents of the stomach were collected in a graduated centrifuge tube. The stomach was opened along the greater curvature and washed slowly under the running tap water. It was put on the slide glass and observed for ulcers. Later it was preserved in 10% formalin solution.

The gastric content was centrifuged at 1,000 rpm for 10 min. The volume was noted. 1 ml of the supernatant liquid was Pipette out and diluted with 10ml distilled water. pH of this solution was noted with the help of pH strip. The solution was titrated against 0.01N sodium hydroxide using Topfers reagent (it is dimethyl-amino-azo-benzene with phenolphthalein and used for detection and estimation of hydrochloric acid and total acidity in gastric fluids) as indicator.

It was observed that the activity and food consumption of control group and trial group rats were normal throughout the study. The activity and food consumption of standard group rats were reduced from second day of the study. All the surgical procedures were done normally and the animals recovered normally. Rat-6 of trial group showed more mucus in the gastric secretion, which was atypical in relation to other group. Ulcer index study showed that the gastric mucosa of all group rats appeared very normal pink color. There were no signs of reddish discoloration (indicating inflammatory changes), blood streaks or ulceration spots.

From the second day of the study, mild reduction in the food consumption and activity in the standard group rats was observed and this was progressing. This could be due to the H2-blocking activity of the standard drug i.e. ranitidine.

When the gastric juice analysis was done, the anti-secretory property of trial drug was validated with its mean volume (1.6 ml), in relation to the control group mean volume (2.6 ml). The anti-secretory property of trial group could be equally potent to that of standard group. This was assessed by comparing the mean volume of gastric juice of both the groups. The acid neutralizing property of the trial drug could be inferred by its mean pH (6.1) to that of the control group (4.5) and standard group (6.1) (Table 1).

The probable reason for the absence of ulcer formation in all the three groups could be due to insufficient time period provided after pyloric ligation or coprophagy. The probable mode of action of shankha draavaka could be due to its strong alkaline properties (pH-9.65) of the drug shankha and its other ingredients in it. As per classical opinion shankha is good in controlling the heartburn, sour eructation, pain in abdomen and indigestion, it is especially useful when increased stomach acid causes pain in stomach or intestine.

Shankha is a good source of calcium, which is an essential component in the production of various enzymes and hormones that regulates digestion. Insufficient presence of calcium can cause low pH, which in long term can cause chronic acidosis’[11]. Shankhamainly consists of calcium, iron and magnesium and is well known for its acid neutralizing effects’[12].

Shankha draavaka possesses alkaline property. Its pH is 9.65. The experimental study reveals that shankha draavaka evidently exhibits anti secretory as well as acid neutralizing effects. Thus, when used judiciously, this medicine can be a useful medicine in cases of annadravashoola (gastritis) and udarashool (colic pain).

Mr. Ravi Mundugaru is acknowledged for animal experiments and data analysis. Dr. KN Sunil Kumar is acknowledged for contribution to the intellectual content of study design and manuscript review. Authors thank Dr. Rekha Jambunathan for edition of the research paper.