Ficus religiosa Linn. is a popularly used bark drug used in Indian system of medicine, an ingredient of Panchavalkala (Five bark drugs). Because of morphological similarity adulteration is common with bark where quality therapeutics is always uncertain. DNA markers are reliable in this regard as the genetic composition is unique for each species and is not affected by age, habitat, environmental factors and physiological conditions. Hence DNA SCAR marker development of F. religiosa was carried out.

Fresh bark samples of F. religiosa along with samples of Panchavalkala tree were collected from various parts of India. DNA was isolated and purified using column. The bands that were found only in F. religiosa species and not in others were selected for further processing. The unique band thus obtained was further purified from the gel and used for cloning into T vector. The white colonies obtained were inoculated in LB media with antibiotic and plasmid isolation was done. The plasmids with retarded mobility were selected for confirmation with PCR using M13 primers. Positive clone was further purified and sequenced. The sequence obtained was used for designing SCAR primers. Results: For identification of F. religiosa by DNA marker DNA marker has been developed for F. religiosa.

SCAR marker developed can be used to identify and differentiate the plant wherever it is used in preparation of medicines. 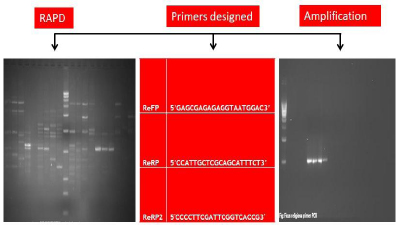 Ficus religiosa Linn. is a large glabrous tree, without aerial roots from the branches, with sessile figs in axillary pairs, found all over India as an avenue tree[1]. It is held sacred by Hindus and Buddhists. It belongs to family Moraceae and the genus Ficus, which is a large genus of trees or shrubs and about 65 species are reported from India[2].

Bark of F. religiosa is popularly used in Indian system of medicine, for the treatment of many disease conditions. It is said to be astringent, antiseptic, laxative, haemostatic, vaginal disinfectant and used in diabetes, diarrhoea, leucorrhoea, menorrhagia, nervous diseases and also in skin problems[3]. Bark contains beta-sitosterol, 1-D-glucosid, Vit K, n-otacosanol, methyl oleanolate, lanosterol, stigmasterol, lupen-3-one[4]. Paste of the powdered bark is used as absorbent in inflammatory swellings. In Ceylon the juice of the bark is used as a mouth wash for toothache and for strengthening the gums. Water in which the freshly burnt ashes of the bark have been steeped is said to cure, obstinate cases of hiccup and stop vomiting sensation[5]. Milk boiled with dried bark is a good aphrodisiac. Bark is also used as external application in many ailments. Bark powder is sprinkled over unhealthy ulcers and wounds to promote granulations. Rubbed with honey the powder is applied to apthous sores of children[6]. Nyagrodhadichoorna, Sarivadyasava, Karanjadighrita, Varadiguggulu are few formulations prepared out of this drug[7]. Bark occurs in flat or slightly curved pieces, varying from 1-2.5 cm or more in thickness. Outer surface brown or ash coloured surface uneven due to exfoliation of cork, inner surface smooth and somewhat brownish and fracture fibre[8].

Bark drugs, because of similar macro-microscopic features are deliberately or accidentally admixed with other bark pieces of same species or other species[9] most of the times. But each plant is combination of several constituents is having its own therapeutic property in treatment. Hence many pharmacognostic studies, macro-microscopic atlas have been conducted and published in this regard.

Identification and quality assurance of botanical material is an essential requirement in herbal medicine to ensure reproducible quality of herbal medicine, which contributes to its safety and efficacy[10]. Most of pharmacopoeia’s, quality control guidelines suggest macroscopic, microscopic evaluation, chemical profiling for herbal drug standardization. Correct chemoytpe of plant can provide clinical efficacy. DNA markers are reliable in this regard as the genetic composition is unique for each species and is not affected by age, habitat, environmental factors and physiological conditions[11]. Various types of DNA based molecular techniques are utilized to evaluate DNA polymorphism such as, DNA based molecular techniques, hybridization based methods, PCR based methods and sequencing based methods[12].

Random Amplified Polymorphic DNA (RAPD) markers are DNA fragments from polymerase chain reaction amplification of random segments of genomic DNA with single primer of arbitrary nucleotide sequence[13]. The limitation of RAPD is that it is not possible to distinguish whether a DNA segment is amplified from a locus that is heterozygous or homozygous. To overcome these problems SCAR(sequence characterized amplified region) marker is developed by cloning and sequencing RAPD marker(unique band) and further designing specific primers for the sequence obtained. These SCAR primers are used to identify and differentiate the strain of interest from others[14].

Aim of present work is to develop SCAR primers for Ficus religiosa that is used in preparation of Panchavalkala along with F. benghalensis, F. glomerata, F. lacor and Thespesia populnea bark powders. This would help in quality control stage of the formulations prepared from this important medicinal plant.

Fresh bark samples of F. religiosa tree were collected from various parts of India. Plant samples were authenticated and Bark samples were frozen at -70°C till further use.

Bark samples were crushed into small pieces using autoclaved pestle and mortar and powdered thoroughly using dry ice intermittently. Individual pestle and mortar were used for each sample and collected the powder in a fresh container till further use.

DNA isolation was attempted with different methods including urea method, DNAzol method, CTAB method and modified CTAB method. CTAB method DNA isolation was found better for RAPD PCR, though the yields were better with other methods. The crushed powder was treated with 70% ethanol before DNA extraction. Water wash to the powder was given to remove soluble pigments and compounds that may interfere in the experiment[15].

Templates of all the 5 species were used for RAPD. PCR was set up using master mix consisting of 100μM each of dNTPs, 100mM KCl, 1.5mM MgCl2, 0.1% each of tween 20 and Nonidet P40, 15p moles of random primer and1u of taq polymerase in 40 ul volume. 100ng of template was used. PCR Cycle conditions were ,initial denaturation at 94°C for 5 minutes, denaturation for 30 seconds, annealing for 1 minute at 45°C, extension for 90 seconds at 72°C and final extension for another 7 minutes.

Unique band of ~900bp was observed for F. religiosa which was not seen in other species. This fragment was gel purified , amplified and used for cloning into T vector. Clones were confirmed by amplification using vector primers and was sequenced. Sequence obtained was analysed and primers were designed to give ~550bp product for this region. Randomly selected ficus samples were used for checking the efficacy of the primers designed[17].

Samples were used from all the five Panchavalkala plant species for RAPD (Figure 1). The bands that were found only in religiosa species and not in others were selected for further processing. The unique band thus obtained was further purified from the gel and used for cloning into T vector.The white colonies obtained were inoculated in LB media with antibiotic and plasmid isolation was done. The plasmids with retarded mobility were selected for confirmation with PCR using M13 primers. Positive clone was further purified and sequenced. The sequence obtained was used for designing SCAR primers. Highlighted sequence and primer designed is shown in Figure 2 and Table 1.

The primer selectively amplifies only Ficusreligiosa samples (Figure 3). Thus SCAR marker for F.religiosa is successfully developed and can be used to identify and differentiate the same wherever it is used.

Clone confirmation 1,6 and 8 are clones 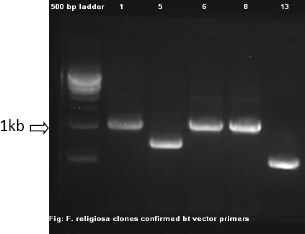 Highlighted sequence is vector sequence. Red letters are flanking Nco I sites and rest of the sequence is of the insert that is sequence characterized for Ficus religiosa. Primer sequence is with green letters.

Quality control parameters with modern scientific techniques are of prime importance. The routine methods of herbal drug standardization address pharmacognostical, chemical, biological, biopharmaceutical and molecular approaches[18]. Isolation of purified DNA from plant bark is challenging because of secondary metabolites and other compounds, which interfere with isolation process and purity[19]. In this study DNA isolation was attempted with different methods and among these, CTAB method DNA isolation was found better for RAPD PCR, though the yields were better with other methods. The DNA obtained was further purified using silica membrane based column. RAPD- a PCR based reaction introduced by Williams et al., which amplify segments of DNA those are essentially unknown to the researcher[20].Still the fragment polymorphisms produced by RAPD-PCR amplifications are not always reproducible. This limitation can be overcome by converting RAPD’s into sequence characterized amplified region (SCAR)[21].

In this study, templates of all the 5 species were used for RAPD. After amplification, the samples were run in 2% agarose gel using DNA marker with 0.1, 0.2, 0.3, 0.6, 1.0, 1.5, 2, 2.5, 3 and 3.5 Kb fragments. Unique band of ~900bp was observed for F. religiosa which was not seen in other species and this fragment was gel purified, amplified and used for cloning into T vector. Clones obtained were sequenced and primers were designed. The SCAR primers thus obtained were further validated using various ficus samples.

Clarity and reliability of SCAR markers proves them best techniques in current herbal drug standardization. SCAR primes of Ficus religiosa can be used to authenticate the sample, preventing its admixture with other bark drugs.

Authors are grateful to Dr. D Veerendra Heggade, Revered President and Dr. Yashoverma B, Secretary, SDM Educational Society, Ujire for encouragement. Authors are grateful to Dr. Shreekanth U, Principal SDM college of Ayurveda Udupi and Dr. B Ravishankar, Director, SDM Centre for research in Ayurveda and Allied Sciences, Udupi for support and guidance. Authors are appreciative to Dr. Vasudha and Dr. Sudha Aristogene Biosciences Bangalore to carry out this research work.

[2] Conflicts of interest Conflict of Interest

Authors declare no conflict of interest