The infraorbital (preorbital) pouch is a conspicuous cutaneous structure present in many ruminant species, including deer, sheep and goats.1 The paired pouches are located rostral to the medial canthus of each eye (Figure 1) and contain both sebaceous glands and sweat glands. The characteristics of these glands have been well documented in deer species but there has been relatively little research into their structure or function in sheep. They seem to have a somewhat sporadic occurrence and appear more often in rams than in ewes. As their secretions are largely sebaceous, it has been suggested that these glands secrete pheromones which aid in olfactory communication2 and is probably associated with dominant behaviour. This report refers to the occurrence of prominent bilateral folds within the infraorbital pouches of a 10-day-old lamb.

Image of the right eye and infraorbital pouch, showing the fold associated with the rostral region of the pouch. 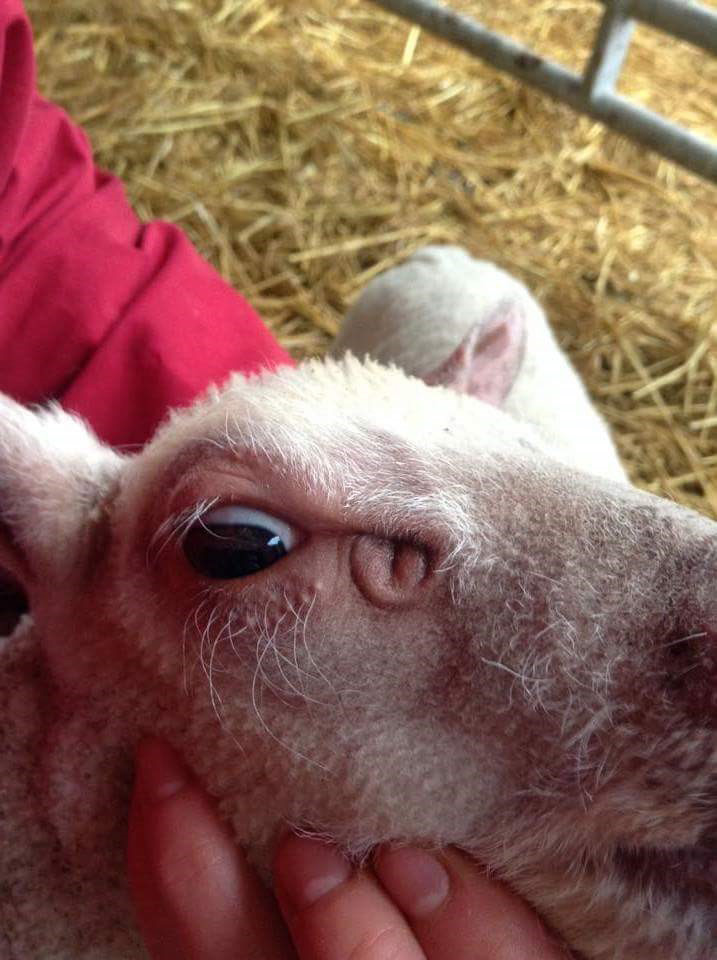 The lamb was born on a farm in County Leitrim, Ireland. The farm has a total flock of 750 sheep managed in three groups of 250 for grazing and lambing labour purposes. The lamb was sired by a Vendeen ram which also had the same infraorbital pouch appearance; however, the farmer reported that another progeny of this ram also exhibited this feature. As the sire was grazing on an out-farm during the lambing season, it was not possible to examine him. The lamb’s dam was a Charolais X Texel mix.

This was a single male lamb, born in mid-March 2017, approximately 10 days old when it was first examined. On clinical examination, the lamb was bright, alert and responsive, and thriving well, surpassing many of its herdmates for liveweight gain.

The pouch fold did not appear to be painful and could be palpated (Figure 1). The fold was clean and uninfected as the area was free of discharge. There was some variation in fold appearance when comparing the left side of the head with the right side, but the general size and shape was very similar (Figure 2 and 3). The lamb continued to grow well and was among the larger lambs in the flock. Subsequent observations were not made as the author’s time on the farm ended after two weeks. 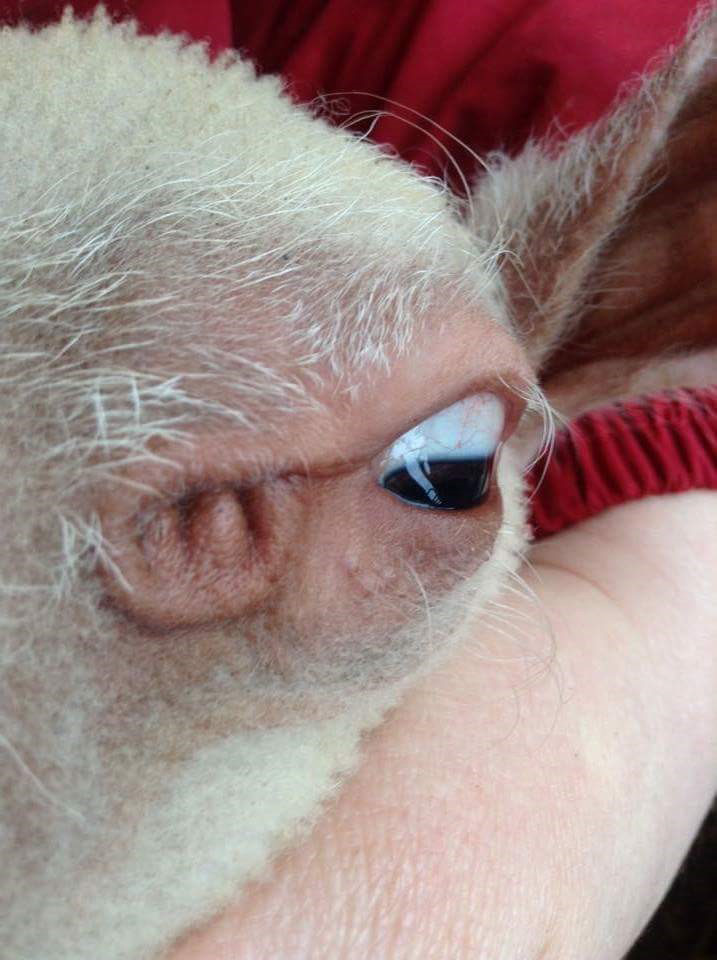 Image of both eyes and bilateral infraorbital pouches. 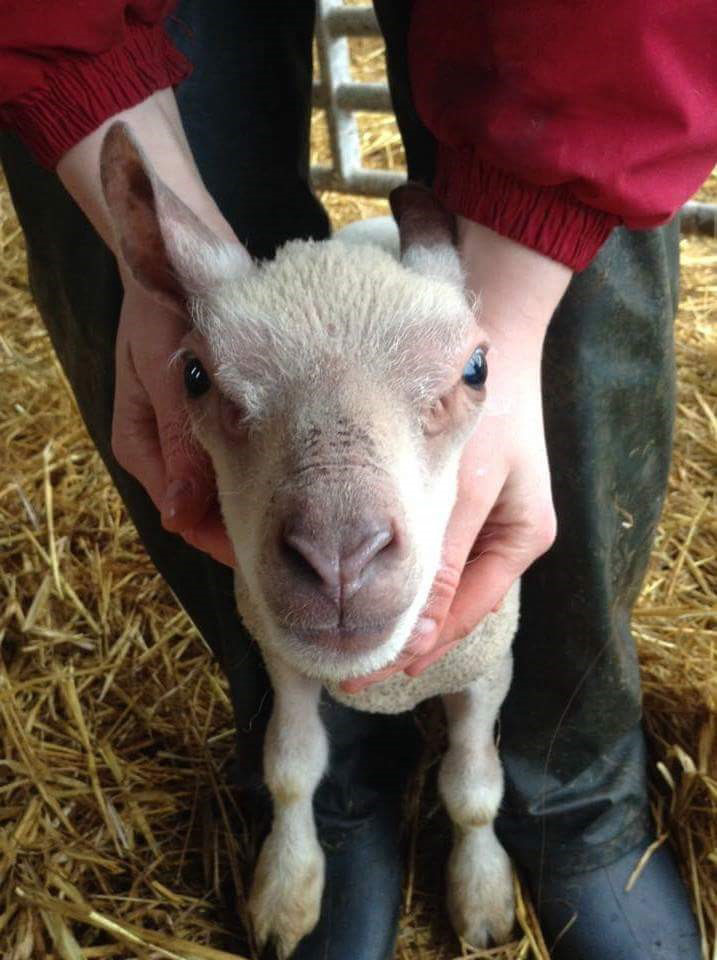 Although this structure is not well researched in sheep, it is well described as the preorbital gland in certain species of deer.3 Behavioural studies on Bighorn Sheep (Ovis canadensis) roaming in Yellowstone National Park, Wyoming and the National Bison Range, Montana have led researchers to hypothesise that the gland plays a role in amicable and submissive behaviours, as shown by the subordinate ram rubbing his head against the head, horns, shoulders and chest of the dominant ram. This behaviour has been named ‘horning’ 4 and is one of the ‘contact patterns’ observed in free-roaming sheep. Horning may achieve scent transfer from the dominant to the submissive ram and it is likely that the infraorbital fold gland has a role in this process.5 In a study of muskox,6 secretions of the infraorbital glands were used as behavioural cues. Self-marking (rubbing glandular secretions on to the forelimbs) began as early as one week of age in wild calves when play fighting. Captive muskoxen did not self-mark but did smear gland secretions on inanimate objects. This study concluded that the principal purpose of the infraorbital scent gland is to provide an olfactory component of the threat behaviour pattern.

As the lamb examined in this report was larger than average and was growing quickly, the folds in each infraorbital pouch may aid in the production of greater quantities of sebaceous secretions, which may be implicated in signalling hunger in neonatal animals.7 Thus, an increased surface area in the infraorbital fold may lead to increased feeding activity and increased weight gain.

The authors would like to thank Charles and Heather Golden, Co. Leitrim, on whose farm the work took place and veterinary surgeon Iain Richards, who provided very useful advice and guidance.

Bartos L, author. Some observations on the relationships between preorbital gland opening and social interactions in red deer. Aggressive Behaviour. 1983;9:59–67