Lin, Maguire, Kilroy, and Kumar: The Utility of Iris-pupillary Area Ratio as a Non-invasive Index of Stress in Primates

As pupillary diameter is exclusively regulated by the autonomic nervous system, the assessment of pupil size (pupillometry) provides an indirect measure of sympathetic nervous system activity and hence an estimation of the degree of stress in the patient. A reliable, objective and non-invasive measure of stress is useful in achieving optimal animal welfare standards, especially with exotic or zoo animals. Hence, we compared the iris-pupillary ratios in populations of wild and zoo monkeys to determine the suitability of using this ratio as a non-invasive index of stress.

Digital photographs of wild (n=32) and zoo (n=19) monkeys were used to measure the iris-pupillary ratio of both eyes using NIH Image-J software. The data are represented as Mean ± SD and were compared using unpaired t test with Welch’s correction.

The data from this study support the utility of iris-pupillary area ratio as an objective, reliable and non-invasive index of degree of stress, which we believe will be a useful tool in managing the animal welfare of exotic animal species.

Stress is an integral part of everyday life, which can impact wellbeing.1-5 An objective and reliable measure of stress is essential to timely intervene optimal animal welfare measures to minimise stress.6-13 Stress can broadly be classified into three categories based on the degree of sympathetic system activity: 1) Physiological stress, 2) Borderline stress and 3) Pathological stress.14-15 While several invasive and non-invasive approaches are described to evaluate the degree of stress,8-9,12,16-17 objectively quantifying the level of stress has remained a challenge, especially in exotic animals due to the limitations in approaching them.

Progressive elevation in the activity of the sympathetic nervous system is integral to stress, which can be directly quantified by measuring epinephrine/nor-epinephrine levels in the circulation or indirectly quantified by measuring various autonomic functions influenced by the sympathetic system.18-22 The invasive approaches can themselves be a cause of stress in exotic animals, as restraint or sedation is usually required for physical examination or blood sampling.23 In our quest to find a solution to this problem, we looked at the feasibility of pupillometry (measurement of pupillary diameter) as a method of quantifying the level of activity of sympathetic system.24-27 Under constant light conditions the diameter of the pupil is exclusively regulated by the autonomic nervous system.24,27 The diameter of the pupil is regulated by radial and circular smooth muscles, which are innervated by sympathetic and para-sympathetic neurons respectively. Activation of radial muscles by sympathetic neurons results in dilatation of the pupil, while stimulation of circular muscles by parasympathetic neurons leads to constriction of the pupil. Hence, a stress associated increase in the activity of the sympathetic system will increase dilatation of pupil.24,27 Comparison of the variable diameter of the pupil with the fixed diameter of the iris (Iris to pupil ratio) accounts for individual variations in eye size and under constant light conditions offers a reliable and objective measure of elevated sympathetic activity and hence stress. We have recently evaluated the sensitivity of the Iris to pupil ratio in reflecting enhanced sympathetic activity by comparing normotensive and borderline hypertensive canines and felines.28 In this study we evaluated the feasibility of objectively measuring Iris to pupil ratio in captive and in wild primates and compared the findings in both groups.

Images of primates living in the wild and in captivity acquired using digital cameras (Olympus OMD em5 mark 1or Nikon D7200) were used for analysis in this study. The images of wild monkeys in their natural habitat were taken at Monkey Hill forest area, Phuket, Thailand. Captive monkeys were photographed from a local Zoo.

The digital images were analysed for Iris and pupil area, perimeter, mean grey values and integrated density using NIH Image J software.29 Images with imperfect angle of the eye, where iris and pupil couldn’t be clearly outlined were excluded from the analysis. Oval or free hand selection tools were used to outline and measure iris and pupil parameters.28 The data were transferred to a Microsoft Excel sheet for calculation of the iris to pupil ratio and the data were analysed using Graph Pad Prism software (Version 5) with significance accepted at p<0.05.

We show the feasibility of objectively measuring the Iris and pupil (I/P) area ratio in wild and zoo monkeys using digital photographs acquired from a suitable distance without intervening the animal vicinity. Although a very small number of photographs were not suitable for analysis, a majority of the photographs were of high resolution and satisfactory for the objective assessment of Iris and pupil area ratio. The I/P area (17.03 ± 7.01 Vs 8.80 ± 5.58) (Figure 1) or perimeter (4.04 ± 1.22 Vs 2.91 ± 0.86) ratio was significantly (p < 0.0001) higher in wild monkeys compared to zoo monkeys. The data from this study indicated that zoo monkeys on average had a dilated pupil compared to monkeys living in a natural habitat. Further the mean grey value (1.58 ± 0.52 Vs 1.34 ± 1.09) and integrated density (27.69 ± 17.05 Vs 29.50 ± 10.95) ratio were similar in both groups, suggesting that the digital photographs from both the groups were acquired under similar lighting conditions. 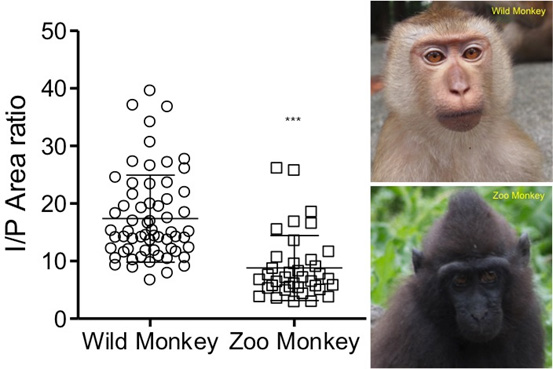 This study supports the feasibility of measuring iris/pupil (I/P) area ratio as a reliable, objective and non-invasive index of stress among primates. The dilated pupil observed among zoo monkeys compared to wild monkeys reflects higher sympathetic activity,24,28 which may be due to captivity-related stress.30-32 Despite the best welfare measures adopted, nothing can fully replace a natural habitat, hence several studies have reported stress among captive exotic animals.30-32 Furthermore, the reliability of pupil diameter as a reflection of autonomic system activity (Figure 2) and mental stress has previously been demonstrated in humans.3,5,24-25,27,33

A schematic representing the effect of autonomic system activity on pupil diameter. 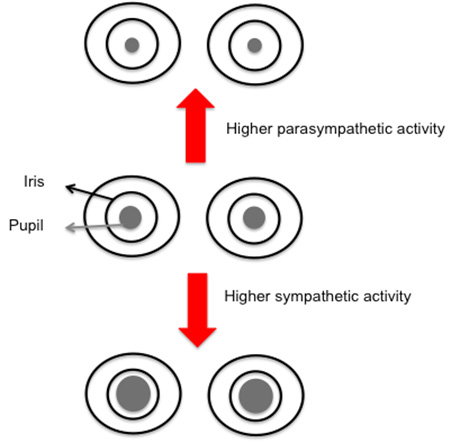 The feasibility to non-invasively and objectively quantify stress based on iris/pupil area ratio in our opinion has potential to be of utility in personalised animal welfare measures. A personalised animal welfare screening can be achieved with minimal intervention by monitoring I/P area ratio at regular intervals at the point of care. Compared to currently available methods of assessing distress in animals,10-11,34-36 I/P area ratio offers objective and early recognition of stress, hence facilitating early intervention measures to improve animal welfare. Several studies in human subjects have reported the potential of pupillary diameter as a sensitive indicator of mild sympathetic system activity;1,24-28,37 this feature in our opinion is specifically useful in distinguishing between physiological and borderline stress. To best of our knowledge, a non-invasive method of distinguishing physiological Vs borderline stress is not currently available. The potential of such refined differentiation of physiological and borderline stress based on I/P ratio analysis offers a robust tool for a wider application in animal welfare protocols to detect early stages of stress especially among exotic species.

One of the potential applications of I/P ratio analysis could be in laboratory animal welfare, where currently the grimace scale is used to measure the degree of pain/stress.38-43 I/P ratio analysis could be integrated to grimace scale scores to refine the efficiency and sensitivity of progressively detecting animal in pain/stress. Although this study was focused on primates, we see the general principle of this work is applicable to all species. Nevertheless further studies are warranted to evaluate both the species-specific iris/pupil area ratio and to compare this index with established invasive or phenotypic measures of stress. We also envisage future research work to develop species-specific I/P area ratio thresholds to objectively quantify stress/sympathetic activity. The stress threshold can be set on a three point scale as follows: 1) Normal 2) Borderline or 3) Abnormal. Such an approach can be automated based on smartphone applications to analyse the I/P area ratio from a captured digital image with real-time outputs for point of care use.

This study has the following limitations. We did not correlate I/P area ratio changes with circulatory levels of sympathetic system activity. However, considering the borderline nature of stress in this study population, it would have been technically not possible to measure minor changes in sympathetic system activity. Moreover, the evidence of exclusive regulation of pupillary diameter by the autonomic nervous system under constant light conditions is well established. The wild and zoo monkeys evaluated in this study are not of the same breed. We are not sure if pupillary diameter can be significantly influenced by differences in breed; nevertheless we did normalise the pupillary area to that of the iris to account for variations in eye size. We have not quantified the I/P area ratio of the same individual at different lighting conditions, although we did not observe any difference in the mean grey values between the two groups, which indicates that light intensity was not likely to be a confounding variable in this study. In conclusion we report here the feasibility of measuring I/P area ratio as an index of stress in wild and zoo primates, which we believe will prove to be a valuable tool for assessing animal welfare.

Julius S, author. Role of the sympathetic nervous system in the pathophysiology of cardiovascular disease. Am Heart J. 1987;114(1):232–4

Journal:
BEMS Reports
‹ The Effectiveness of Orally Administered Probiotic on Peri-Implant Tissue Condition: A Prospective Study up A Pictogram of Nipah Virus Infection and Treatment ›