[1] School of Biological and Chemical Sciences, Faculty of Science, Technology and Environment, The University of the South Pacific, Suva, FIJI.

Correspondence to: Correspondence Romila D Gopalan, School of Biological and Chemical Sciences, Faculty of Science, Technology and Environment, The University of the South Pacific, Suva, FIJI. Phone no:+679 32 32446 E-mail: devi_rd@usp.ac.fj

Among the decoction and ethanol extracts tested, all plants showed DPPH scavenging activity. The most potent antioxidant activity was seen in C. hirta with an IC50 value of 0.64 mg/mL. The activity of C. hirta was twofold more potent than the standard ascorbic acid (IC50 = 1.33 mg/mL) indicating that polar extracts of C. hirta contains compounds with relatively better antioxidant properties than ascorbic acid.

The plant extracts used in this study were crude extracts, as it is envisaged that if the phytochemicals were isolated and purified from these plants, more prominent results could be expected. These plants could prove leads to safer and better candidates for the future selection of antioxidant.

Oxygen is essential for respiration; however, under certain conditions it can have a negative effect on our health due to the formation of reactive oxygen species (ROS) or free radicals. ROS are formed under normal physiological conditions but become deleterious when not being eliminated by the endogenous antioxidant systems. The existence of ROS leads to oxidative stress 1 and is often cytotoxic and gives rise to tissue injuries.2 ROS can attack lipids and proteins, destroy membranes, damage DNA, and lead to chromosomal damage.1 Thus, ROS can contribute to development of numerous diseases, such as cardiovascular diseases,3 neural disorders,4 mild cognitive impairment,5 Alzheimer’s disease,6 alcohol induced liver disease,7 Parkinson’s disease,8 ulcerative colitis,9 ageing,10 atherosclerosis,11 and cancer.12 For these reasons, antioxidants are of interest for the treatment of many kinds of cellular degeneration including Alzheimer’s disease.13-14

Thirteen plant species listed in Table 1 were selected for antioxidant activity based on the traditional knowledge of using polar extracts (aqueous and ethanolic extracts) were used in this study. The fresh plant specimens were collected from their natural habitats from Vanua Levu and Viti Levu in Fiji.

The plant samples were thoroughly washed with tap water to remove dust and were dried according to the method described by Mohd et al. 22 in a convection oven at 40 °C for 48 h until there was no change in weight. The dried plant parts were ground separately into powder using an electric blender and stored in an air tight container. The samples were kept in dark until ready for extraction.

12 g of powdered plant sample was extracted with 100 mL of 96% ethanol using soxhlet extraction unit at 60 °C for 18-20 hours. Filtered extract from the soxhlet extractor was concentrated using roto evaporator to yield a dark semi-solid residue. The extract was stored in a refrigerator at 4 °C in air-tight bottles until further use.

10 g of powdered plant material was added to 100 mL of deionised water in a beaker and boiled for 10 minutes. The decoction was cooled and filtered through Whatman No. 1 filter paper. The filtrate was further concentrated by freeze-drying and stored at 4 °C in a sealed bottle prior to analysis.

Free radical scavenging ability of the samples, based on the scavenging activity of DPPH free radical, was evaluated using the procedure described previously by Blois’23 with slight modification. Different dilutions (0.2, 0.4, 0.6, 0.8, 1.0, 1.5 and 2.0 mg/mL) of 50 μL plant extract (ethanolic/decoction) were added to 5 mL of 0.002% ethanolic solution of DPPH in a vial covered with aluminium foil. The samples containing DPPH was incubated in the dark for 30 minutes. The absorbance was then measured at 517 nm using a double beam UV spectrophotometer (UV Winlab Version 2.85.04, Perkin Elmer).24 The absorbance of plant extracts dissolved in ethanol (without DPPH) was measured and subtracted from the absorbance of the DPPH for colour correction. Negative control contained all components apart from the plant extracts, whereas positive control ascorbic acid was used in the assay as standard. Ethanol was used as a blank. The assay was repeated in triplicates and percentage inhibition was calculated using the formula:

Control absorbance = absorbance of the control reaction containing all reagents except the plant extracts.

The assays were conducted in triplicates. The data were expressed as means ± standard error (SE). IC50 values were calculated in MS Excel linear regression analysis among the percent inhibition against the extract concentrations.

Free radical scavenging activity in medicinal plants has attracted a lot of interest recently. It is assumed that high antioxidant properties of the plants is linked to effective treatment of illnesses. In this study, thirteen medicinal plants were evaluated for antioxidant properties using DPPH assay. The DPPH• is stable organic nitrogen centered free radical with a dark purple color which becomes colorless when it reacts with antioxidants to form non-radicals.25 Thus, in the analysis, lower absorbance of the reaction mixture indicated the higher free radical scavenging activity.

Inhibition of DPPH at 50% concentration (IC50)

Half maximal inhibitory concentration (IC50) refers to the concentration of the plant extract where the response is reduced by half and thus determines the effectiveness of the antioxidant. Those plant extracts with higher free radical scavenging activity had lower IC50 value; in this case it was considered lower than 20 mg/mL to select the effective sample. IC50 values of the thirteen Fijian plants used in this study are given in Tables 2 and 3. For the water extract, the most potent antioxidant exhibiting plants were C. hirta, B. pilosa and C. asiatica with IC50 values of 0.64, 18.24 and 18.24 mg/mL respectively. For the ethanol extracts, five most potent plant species are C. hirta (1.45 mg/mL), A. conyzoides (13.22), B. pilosa (13.79 mg/mL) C. asiatica (15.45 mg/mL) and S. koenigii (17.55).

The DPPH radical scavenging abilities of the extracts were significantly comparable to those of ascorbic acid (standard), showing that some extracts have the hydrogen donating ability and could serve as free radical inhibitors or scavengers, acting possibly as primary antioxidants.

[i] Each value represents the mean ± SE

[i] Each value represents the mean ± SE

Among different fractions of lyophilized samples of decoction and ethanolic extract, C. hirta belonging to melastomataceae family; showed highest activity which can be attributed to its high antioxidant potential. C. hirta had the IC50 value of 0.64 mg/mL for decoction while 1.45 mg/mL for extraction with ethanol. On the other hand, the IC50 value of ascorbic acid was 1.33 mg/mL. This shows that there were more polar constituents in C. hirta which are responsible for the antioxidant activity.

Comparison of IC50 for decoction and ethanolic extract

N. collina belonging to Loganiaceae family displayed higher free radical activity with ethanol extract compared to the decoction as shown in Figure 2 in the current study. At lower concentrations, ethanolic extract showed 5-8 fold higher free radical activity, which decreases yet higher activity at higher concentrations. This is consistent with the study carried out by Sudhira et al.26 with Strychnos colubrina also from Loganiaceae family, which showed more potent activity with the methanol extract than the aqueous extract. The study also demonstrated the presence of alkaloids, phenols, glycosides, steroids, and flavonoids in S. colubrine, which is thought to be responsible for antioxidant and antimicrobial properties against Gram-positive and Gram-negative bacteria.26 Similarly, B. pilosa and A. conyzoides both belong to Asteraceae family had shown similar antioxidant activity in this study. According to Shukla et al,27 a group of plants belonging to the family Asteraceae contained phenols, sterols and flavonoids as active constituents. These phytochemicals may also be present in B. pilosa and A. conyzoides that are responsible for anti-oxidative property.

Additionally, the methanolic extract of M. edule and M. umbellatum belonging to Melastomataceae family also showed remarkable scavenging capacity on free radicals in a concentration dependent manner.28-29 Rutin, a compound isolated from leaf extract of M. edule had strong reductive capacity on DPPH radicals with an IC50 value of 17.06 μg/mL and ferric ion chelation (IC50 value 17.29 μg/mL) potential. The methanolic extract of M. umbellatum was found with high content of phenol. Rutin and phenol involved in the antioxidant activity might also be present in C. hirta (Melastomataceae) as it exhibits similar antioxidant properties and belongs to the same family.

Other studies have shown the presence of glycosides, carbohydrates, tannins and coumarins present in Dissotis longipetala (Melastomataceae) in the bark extract.30 The authors postulated high antioxidant and reducing power to high total phenol and low total flavonoids contents. The results obtained for C. hirta in our study could possibly have high levels of antioxidant compounds, which might be the reason behind its traditional uses in the treatment of a range of illnesses (headache, thrush, haemostasis and skin infections) in Fiji.

Most plants showed activity in a concentration dependent inhibition; however, there were a few plant extracts that showed decreased percentage activity with the increase in the concentration. This could be due to (1) the decreased solubility of the plant extract and (2) the turbidity or intense colour of the plant extract with higher concentration that affected absorbance. It was noted that P. perfoliata and Z. officinalis inhibited reversibly upon dilution with water and ethanolic extracts as shown in Figure 3. Water extracts of Z. officinalis showed a 5 fold decrease in free radical scavenging activity at 1.0 mg/mL when compared to the activity at 0.2 mg/mL. Similarly, DPPH free radical scavenging activity for ethanolic extract of P. fruticosa showed a 2 fold decrease in inhibition at 2 mg/mL. P. fruticosa, which belongs to the family of Araliaceae showed an IC50 value of 82.15 mg/mL DPPH free radical activity in the water extract. Similar result was reported for Cussonia arborea, a plant that belongs to the same family as P. fruticosa (with IC50 value 91.93 mg/mL in methanol extract)30 indicating poor antioxidant properties.

Activity with the most diluted solution

This is the first reported study for antioxidant activity of the thirteen plants used except for C. asiatica. The results of the present work showed that both water and ethanolic extracts of all plants demonstrated DPPH activity in concentration dependent manner except for P. perfoliata, Z. officinalis and P. fruticosa. The majority of plants showed higher DPPH radical scavenging activity of their ethanolic extracts compared to their water extracts. The higher antioxidant potential of the ethanol extract may suggest that ethanol is able to extract more active compounds with possible DPPH radical scavenging activity than water. The most potent antioxidant extract was from C. hirta which had 97.93% free radical activity with water extract while 72.19% with ethanol extract at 2.0 mg/mL suggesting that C. hirta contains efficient antioxidant compounds. All the plants tested in this study may offer potential for the treatment of different diseases with their anti-oxidant properties, thus can be promising candidates for more detailed in-vitro and in-vivo studies. 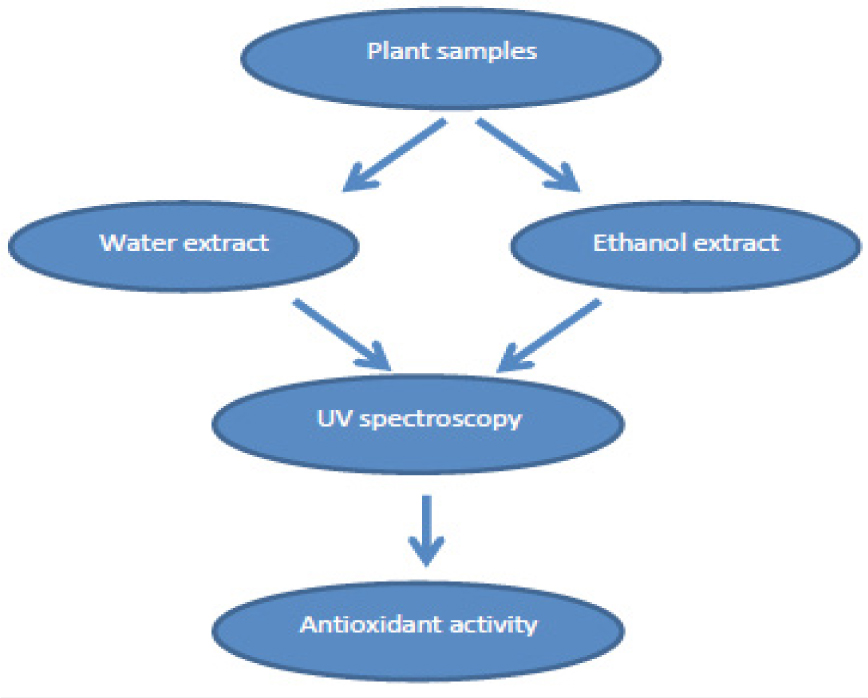 Authors acknowledge the research grant from Faculty of Science, Technology and Environment, The University of the South Pacific. 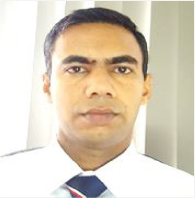 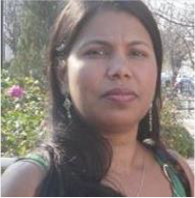 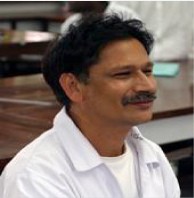 [3] Conflicts of interest CONFLICT OF INTEREST Authors hereby confirm no conflict of interest associated with publication of this research work.

Journal:
Free Radicals and Antioxidants
‹ A Comparative Study of Antioxidant Potential of Three Commonly Used Spices in Bangladesh up An <italic>in vitro</italic> Study of the Antioxidant and Antiproliferative Properties of <italic>Artemisia absinthium</italic>- A Potent Medicinal Plant ›