[4] Department of Surgery, John A. Burns School of Medicine, University of Hawaii and Research Laboratory at the Queen’s Medical Centre, Honolulu, Hawaii, USA.

Due to the flammable nature of the reaction, this procedure must be carried out with extreme care. OXANO• (10 mM) was diluted in 50 ml of Krebs-Henseleit buffer (pH 7.4) and hydrogenated in a nitrogen atmosphere in the presence of Platinum (IV) Oxide Hydrate (100 mg).

The reaction was completed in approximately 45 min, and was confirmed by the disappearance of the three-electron paramagnetic resonance (EPR) signals (1:1:1). Additionally, the absorption spectra were measured for both OXANOH and OXANO• in the ultraviolet (UV) and visible light regions.

OXANOH is an extremely valuable oxygen free radical spin trap due to its ability to trap both extra and intracellular free radicals in biological tissues.

OXANOH can be used as an effective detector of both extra and intracellular oxygen free radicals.

Oxygen free radicals (OFR) play an important role in ischemia-reperfusion injury.1-10 Electron paramagnetic resonance (EPR) spectroscopy is widely used in the detection of such free radicals using appropriate spin traps. A major hurdle in this venture is that most spin traps can fulfil their role only to detect extracellular free radicals, thus leaving behind a large pool of untrapped intracellular free radicals.11 In this regard, the use of a probe that can enter cells to react specifically and irreversibly with free radicals would be of tremendous benefit. The nitroxide spin label, 2-Ethyl-2,5,5-trimethyl-3-oxazolidinoxyl (OXANO•) is such an agent. This compound showed no adverse effects on cat, rat, and rabbit preclinical models when given as an intra-arterial infusion.

To use OXANO•, it is necessary to first reduce it to its corresponding hydroxylamine (OXANOH)12 Figure 1. The latter allows detection and quantification of free radicals.13 Due to the flammable nature of the reaction, hydrogenation of OXANO• requires great care.14 A safe new approach was developed to counter this concern, via a modified laboratory protocol that essentially eliminates the fire hazard.12 The absorption spectra of OXANO• and OXANOH also were studied with a view to characterizing the latter as an effective intracellular spin trap.

Conversion of the stable free radical OXANO• to the intracellular spin trap OXANOH.

The stable nitroxide radical OXANO• (0.85 g/ml, MW 158.22) is a brownish red oil with a freezing point well below 0°C. OXANO• has a characteristic triple peak (1:1:1) EPR signal that disappears when hydrogenated to the spin trap, OXANOH. The latter undergoes slow spontaneous conversion over time to the stable OXANO•, thus requiring hydrogenation immediately prior to use.

The reaction was carried out by bubbling hydrogen, in the presence of a catalyst and a nitrogen atmosphere, into a solution of OXANO• in Krebs-Henseleit (KH) buffer, pH 7.4. The hydrogenation was confirmed by the disappearance of the three characteristic peaks on EPR. OXANO• (0.1 ml, 10 mM) was added to 50 ml of KH buffer in a 125-ml filter flask. Next, 100 mg of Platinum (IV) Oxide Hydrate were added to the solution to provide the catalytic surface necessary for the hydrogenation, and the solution was mixed continuously via a magnetic stir bar. A rubber stopper with two 5 mm holes was placed on the flask and a double male tubing adapter was placed into each hole. One of the adapters had a 4-cm rigid plastic tube extending into the flask, well above the level of the reaction mixture. The other adapter had an 8-10 cm rigid plastic tube extending into the flask with its tip submerged deep into the solution.

Rubber tubing was attached to the adapters and each tube was connected to a Pyrex 20 mm x 150 mm side arm test tube. Rubber stoppers with single 5 mm holes were placed on each tube after the tubes were filled with 10 - 15 ml of KH solution. The test tubes and flask were secured on a clamp stand. Pasteur pipettes were placed into the stopper. The end of the pipette ultimately leading to the short rigid tube was connected through rubber tubing to a nitrogen tank, while the other end was connected to a hydrogen tank.

The reaction was carried out under nitrogen flow in a fume hood. The nitrogen tank regulator was adjusted to produce gentle continuous bubbling in the test tube. After several min, the hydrogen regulator was adjusted to provide a similar flow through the test tube and the flask. The magnetic stirring bar was rotated at a rate sufficient to circulate the platinum oxide catalyst from the bottom of the flask, thus ensuring contact with the hydrogen and OXANO• solution interface Figure 2. The reaction could proceed for up to 60 min, and samples were subjected to EPR spectroscopy at various intervals Figure 3. Disappearance of the characteristic triplet peaks indicated conversion of OXANO• to OXANOH. To decrease the spontaneous conversion reaction, the newly prepared OXANOH solution was kept in the freezer at -15°C. The EPR spectra of the samples were recorded at room temperature. The spectrometer was run at 3,400 G with a scan range of 100 Hz, a gain of 1.6 x 10, 10 dB power, f = 9.565 and a scan time of 2 min.

Schematic diagram of the set up for hydrogenation of OXANO• in the presence of Platinum Oxide and Nitrogen. 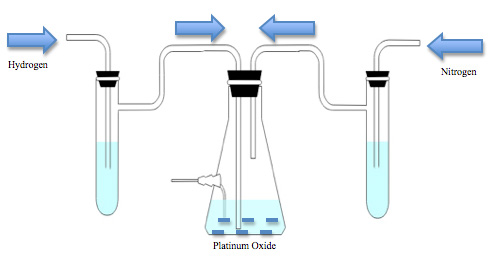 As previously mentioned, several studies have shown the important role of OFR in the pathogenesis of ischemia-reperfusion injury.15-20 Spin traps have been used to detect OFR using EPR spectroscopy.21-26 Most of these agents work extracellularly and many leave behind a large pool of untrapped intracellular OFR. OXANO• was selected for the detection of free radicals in this work since it readily enters the cell.12 The technique described by Rozantsev for the preparation of OXANOH was not without hazards.27 Here, we describe a new set-up and protocol for the safe hydrogenation of OXANO•. The reaction was carried out by bubbling hydrogen in the presence of a catalyst and a nitrogen atmosphere into a solution of OXANO• Figure 2. With this protocol, no fire episodes were encountered. The EPR spectrum taken prior to the introduction of hydrogen showed 3 characteristic peaks due to OXANO• Figure 3a. The signal began to diminish after 30 min of gentle bubbling with hydrogen in the presence of platinum Figure 3b. The reaction essentially was complete by 45 min, after which time only the EPR-silent OXANOH was present in the mixture Figure 3c. When stored at -15°C, the compound was shown to remain in the fully reduced form for up to 30 min compared with the one kept at room temperature. Once removed from the freezer, OXANOH began to convert back to the stable OXANO• within 15 min, as evidenced by EPR spectroscopy.

EPR spectrum of OXANO• a) before b) after 30 min of and c) after 45 min of hydrogemation. Thee figures show the disappearance of the EPR signal indicating conversion fo the OXANO• to the EPR-silent OXANOH. 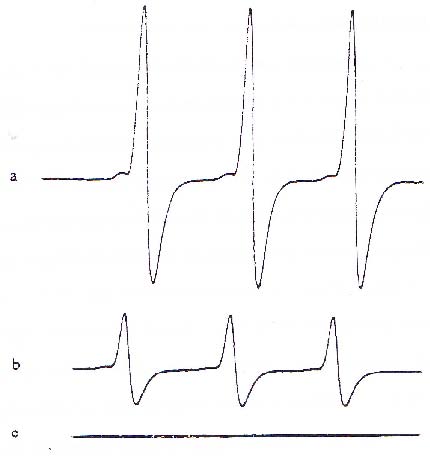 During the bubbling of hydrogen, platinum (IV) oxide hydrate is in suspension, and when withdrawing samples for EPR, care must be taken to obtain a catalyst-free sample. This is particularly important if the sample is to be used for the perfusion of biological tissues. The signals, per se, were not affected by the presence of platinum in the EPR tube. Since hydrogen is highly flammable, the hydrogenation must be undertaken with care. Passing nitrogen gas for 10-15 min to saturate the flask atmosphere, prior to the administration of hydrogen, is recommended. This should continue throughout the hydrogenation reaction as a precaution against fire hazard. The stirring process ensures maximum contact between OXANO• and the platinum surface. The reaction is safely expedited using adequate catalyst and stirring.

The reduced form of OXANOH is the OFR spin trap and is effective in biological tissues as an intracellular spin trap.12,13,28,29 Peaks seen in the EPR spectrum are due to the free radical, OXANO•. No double bonds are involved in the trapping reaction. Instead, the primary radical (R•) extracts a hydrogen atom from the hydroxyl group of the hydroxylamine moiety (>N-O-H) of the OXANOH. This generates a non-radical species from the primary radical and the stable OXANO• which is responsible for the EPR peaks. 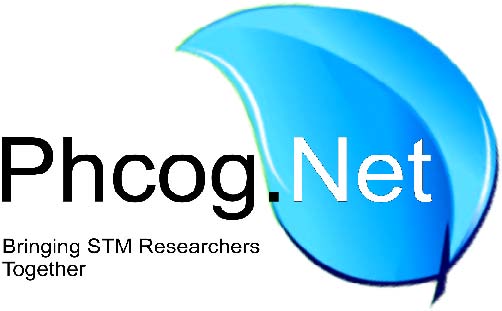 Thus, the primary radical R* itself, is not trapped, but rather, reduced by extracting the hydrogen atom, H* from OXANOH resulting in R-H. What remains is OXANO• with the single remaining electron of the two that formed the O-H bond, presumably delocalized over the oxygen and nitrogen atoms, with facilitation by the oxazolidine ring structure, thereby conferring pronounced stability to this radical. It can be concluded that OXANOH, being a stable intracellular spin trap, has the potential to eliminate both extra and intracellular free radicals, thereby minimising OFR injury.

The absorption spectra of the different forms of OXANO• are shown in Figures 4 and 5. Figure 4a shows a strong UV-absorbing peak (lmax 238 nm) for both OXANO• and OXANOH. Figure 4b is an expanded view of the visible region, showing a minor peak at lmax of 400 nm. Hydrogenation of OXANO• caused a shift in the peak in the visible region, with a new lmax of 360 nm. Hydrogenation did not affect the maximum absorption in the UV region, which is caused by the nitrosamide ring. The OXANOH obtained by autoxidation or secondary to the Fenton reaction also had maximum absorption in the UV region (lmax = 238 nm). However, in the visible region, the stable radical produced in the Fenton reaction gave a trough at 340 nm, indicating a different compound from the original OXANO• Figure 5. Auto-oxidation, on the other hand, gave maximum absorption at the original wavelength of 400 nm Figure 5. This suggests that the OXANO• stable radical produced in the Fenton reaction, which generates hydroxyl radicals, might be different from the original pre-hydrogenation stable form of OXANO•. In this study, there was no change in the amount of OXANO• produced. However, to differentiate between the different types of OXANO•, spectrophotometry in the visible region might be indicated to detect OXANO• produced secondary to the spin trapping. Though an increase in the primary OXANO• signal was not detected, the absorbance of OXANO• in the visible region might be used to detect OFR trapping.

Absorbance spectrum of OXANOH and OXANO• in the UV region. 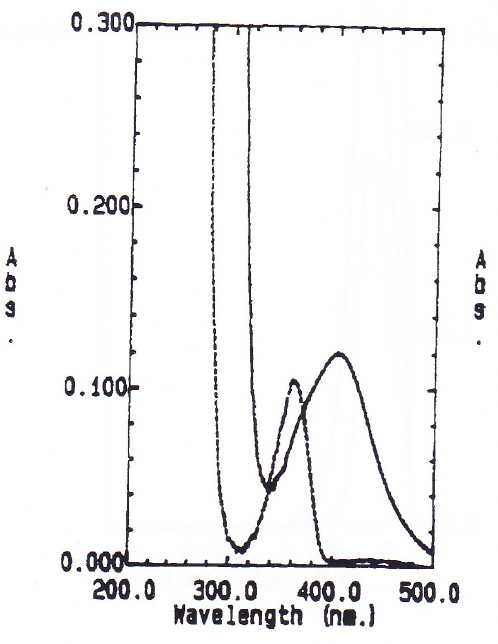 Absorbance spectrum of OXANOH and OXANO• in the visible region. 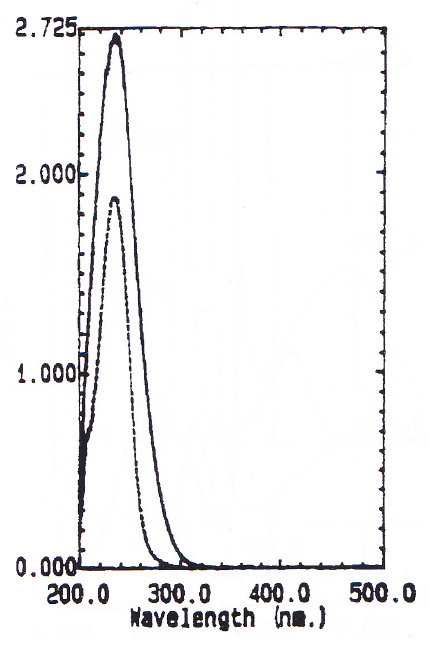 Absorbance spectrum of the different compounds of OXANOH in visible light region. 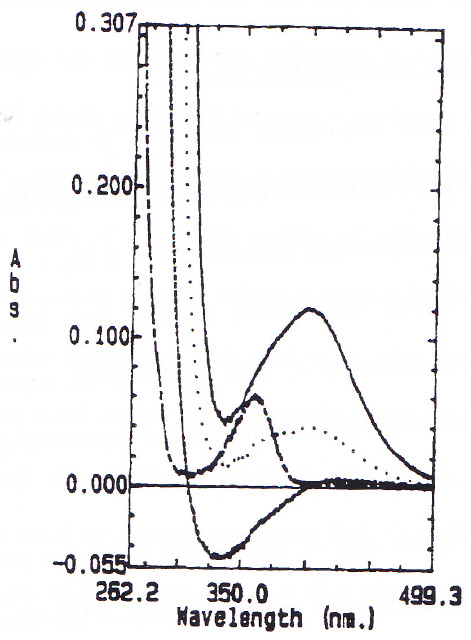 OXANOH is a valuable spin trap which can trap both extra and intracellular free radicals.

The authors wish to thank Anthony Suehiro and Glen T. Suehiro for their technical assistance and expert critique.

The authors declare none.

Marklund S, Marklund G , authors. Involvement of the Superoxide Anion Radical in the Autoxidation of Pyrogallol and a Convenient Assay for Superoxide Dismutase. Eur J Biochem. 1974;47(3):469–74