The precise mechanism linking overweight/obesity with hypertension remains unclear. The present study was conducted (1) to evaluate the impact of adiposity on cardiac autonomic nervous system (ANS) activity and arterial health and (2) to determine the relationship between adiposity, cardiac ANS, arterial stiffness and blood pressure (BP).

The prevalence of obesity in young individuals is increasing rapidly worldwide. Obesity is associated with hypertension and cardiovascular (CV) diseases.1 Studies have demonstrated that overweight and obesity predicts the development of hypertension.2-3 Hypertension is considered as one of the primary mediator of CV diseases. However, the excess weight-induced physiological and molecular mechanisms that modulate blood pressure (BP) are not clearly understood.

Various mechanisms such as activation of renin-angiotensin-aldosterone system (RAAS), endothelial dysfunction, oxidative stress and inflammation have been identified as the causes of obesity-induced hypertension.3-5 Few studies have shown that obesity may modulate sympathovagal balance towards sympathetic dominance which may be responsible for elevation of BP by increasing vascular tone,6 while other study have not found any change in autonomic nervous system (ANS) function.7 Hence, the influence of body mass index (BMI) on ANS function remains unclear. Endothelial dysfunction is shown to be associated with hypertension in individuals with overweight and obesity, and is predicted as the potential cause that may contribute to the hypertension.8 An experimental study on animal model has demonstrated an increased BP and impairment in relaxation of the aorta in response to acetylcholine (an endothelium-dependent vasodilator) in mice with high-fat diet induced obesity.9 Studies have also shown an association between arterial stiffness and obesity.10-11 However, the precise mechanism linking overweight/obesity with hypertension remains unclear. The inter-relation between autonomic nervous system and arterial health and BP influenced by adiposity may help in understanding the pathophysiology of obesity induced hypertension. Therefore, the present study was conducted with two objectives (1) to evaluate the impact of adiposity on cardiac autonomic activity and arterial health and (2) to determine the relationship between adiposity, cardiac autonomic nervous system (ANS), arterial stiffness and BP.

A cross-sectional study was conducted on young healthy subjects (n=48) with overweight/obesity (n=24) and normal weight (n=24) with age ranging between 18-24 years. Healthy subjects with BMI ≥ 25 (obese/overweight) were included in the study group (OW/Obese group) and BMI from 18.5-24.9 (normal weight) in the control group (NW group). Subjects with history of acute or chronic diseases; habit of smoking, chewing tobacco and consumption of beverages; subjects taking any medications, herbal drugs and vitamin supplements and subject refusal were excluded from the study. Informed consent was obtained for participation in the study. Approval for the study was taken from the institutional ethical committee of Sri B. M. Patil Medical College, Hospital and Research Centre, BLDE (Deemed to be University), India, as per the guidelines (2017) of Indian Council of Medical Research.

The data was collected in the morning between 9:00 am to 12:00 pm at room temperature following supine rest for 10 min.

Data obtained was expressed as mean and SD. Data distribution was assessed prior to the applications of tests for significance. To find the significant difference in the outcome variable between the two groups, unpaired-t test was applied. Pearson correlation coefficient was applied to find a correlation between the variables. Multiple regression analysis was done to determine the predictors of increased BP in obese individuals. Statistical significance was established at P≤0.05.

Characteristics of the participants.

Table 2 shows vascular stiffness indices in study participants. There was no significant difference in arterial stiffness between individuals with overweight/obese and normal weight. Though not significant but a mean increase in baPWV, hbPWV, AI@75, and ASI was found in OW group when compared to NW group participants.

Table 3 shows a significant variation was observed in LF, HF and LF/HF ratio between NW and OW groups. LF and LF/LF ratio was significantly elevated (p<0.001) while HF was significantly lowered (p<0.001) in obese/overweight subjects when compared to normal subjects, suggesting that increase in weight above normal can induce sympathovagal imbalance. 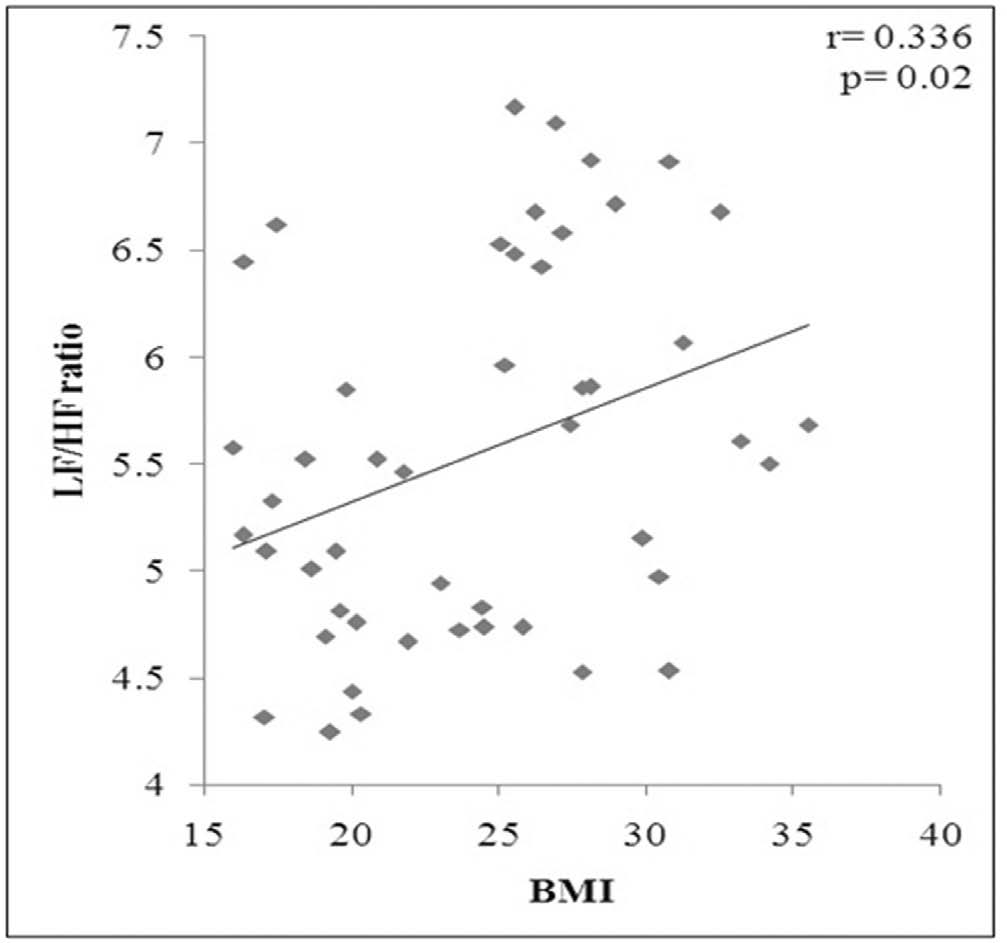 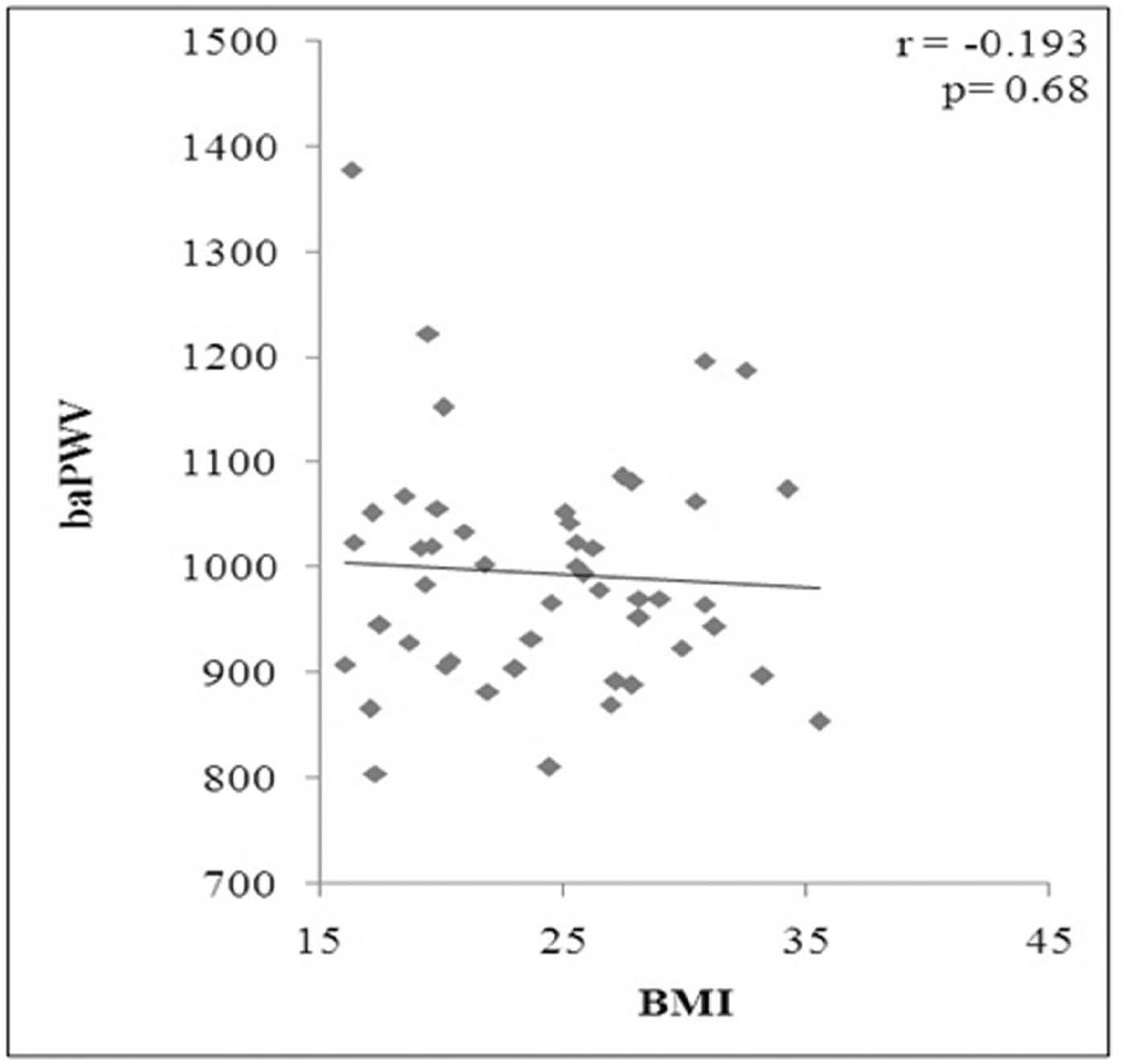 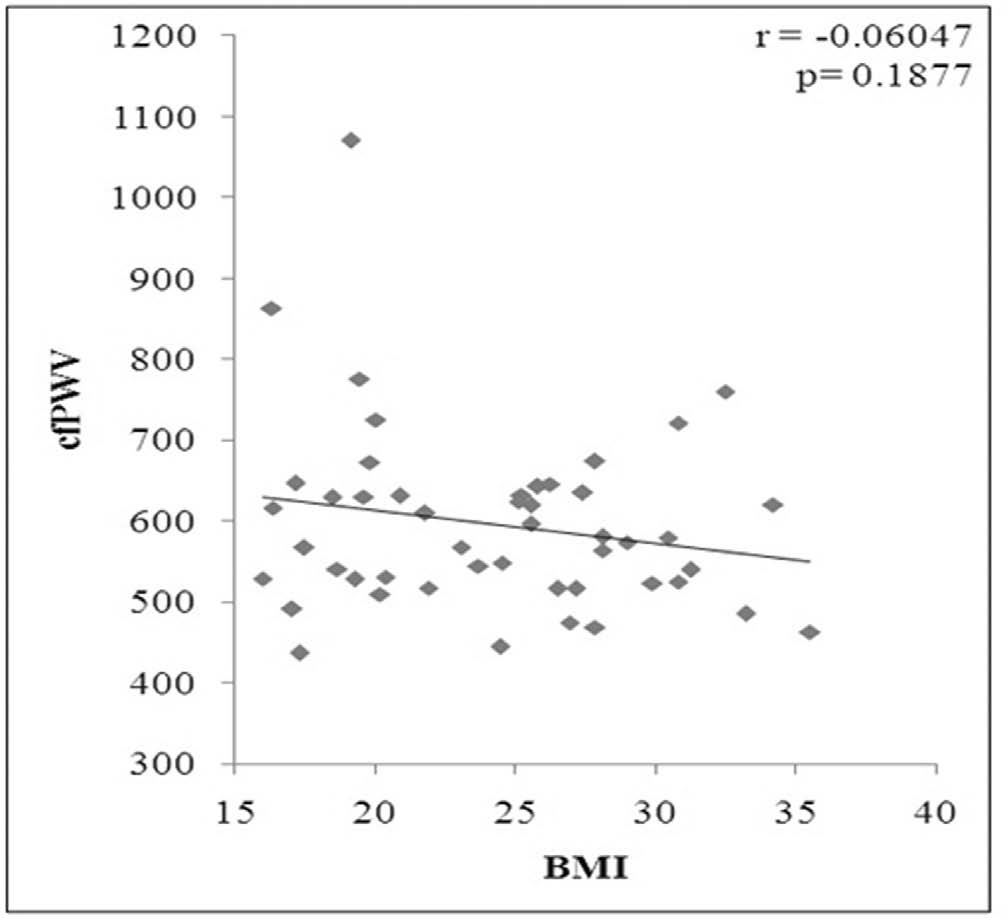 Autonomic nervous system plays an important role in regulatory mechanism of BP and CV homeostasis. Sympathetic nervous system (SNS), one of the two divisions of the ANS regulates vascular tone and BP.17 Recent evidence suggests that SNS is not only involved in short-term regulation of BP, but also plays a key role in long-term BP regulation.18-19 Thus, sympathetic over activity increases vascular tone (mainly vasoconstriction of small resistance muscular arteries) and BP. Studies have demonstrated that sympathetic over activity is one of the major mechanisms for elevation of BP through increasing vascular tone.20-21 As stated earlier, HRV is one of the best tools to measure sympathetic and parasympathetic activity. Kaufman CL et al.22 demonstrated a significant difference in HRV variables among normal, overweight and obese group. They showed significantly higher LF and LF/HF ratio and reduced HF in obese individuals as compared to normal weight subjects. While Krishna P et al.7 in their study did not find any impact of overweight on sympathovagal balance. In the present study, we found a significant elevation in LF (nu), LF/HF ratio and decrease in HF (nu) in overweight/obese individuals when compared with normal weight subjects. These changes in HRV suggest a shift in the autonomic balance towards sympathetic dominance with sympathetic over activity and reduced parasympathetic tone in OW/obese individuals.

We also observed a significant correlation between increase in BMI and sympathovagal imbalance [Wide Figure 1]. Further, there was a significant correlation between sympathovagal imbalance and MAP [wide Table 4]. These data suggest that a significant interrelation exists between BMI, sympathovagal balance and MAP. Several studies have linked the sympathetic over activity with the mechanism of development of metabolic dysfunction and obesity, but yet it is a matter of debate whether SNS over activity is a cause or consequence of metabolic dysfunction.23-24 We presume that sympathetic over activity in overweight/obesity is an essential modulation to fulfill the excess demand (oxygen and nutrition) of the overweight body, so it may be a consequence of overweight/obesity. This overweight/obesity induced essential sympathetic over activity might in turn have increased the heart rate, vascular tone and BP in the young obese individuals.

The interrelation between adiposity, cardiac ANS activity, arterial stiffness and BP is depicted in Figure 3. We presume (from our data) that excess adiposity induces sympathetic over activity which enhances the vascular tone and so BP. Increased BP may initiate vascular damage and induces stiffening of the arteries; and in-turn stiffened arteries may increase the BP, indicating a possible vicious cycle between BP and arterial stiffness.13,27-28 This vicious cycle may be further aggravated by adiposity associated CV risk factors like glucose intolerance or insulin resistance.29 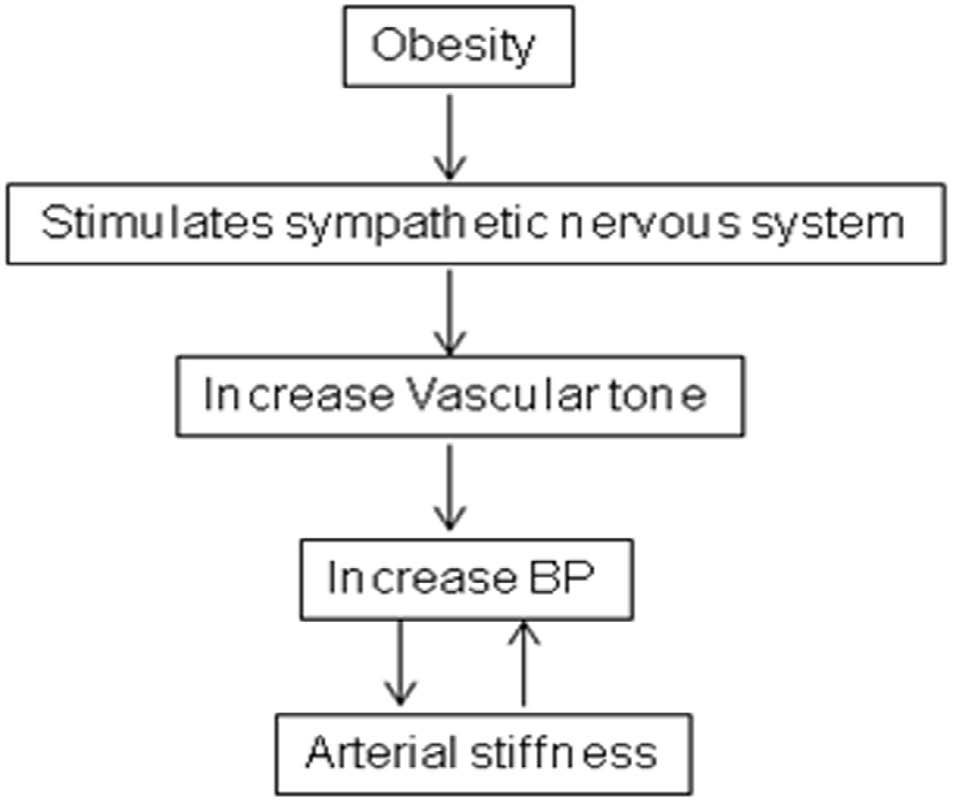 Increase in BMI induces a modulation in autonomic function through a shift in sympathovagal balance towards sympathetic dominance. Though not significant, mild increase in vascular stiffness in overweight/obese subjects indicate an initiation of vascular damage in them. Adiposity, cardiac ANS, arterial stiffness and BP are interrelated and the relation is complex. Excess adiposity may modulate sympathovagal balance by increasing sympathetic activity. Sympathetic over activity can enhance the vascular tone and elevate BP. Inturn, increased BP induces stiffening of arteries that may further augment BP. Further, long-term follow up studies may be required to understand precisely the inter-relationship between adiposity, BP, ANS and stiffening of arteries.

The authors declare no conflcit of interest.

Task force of the European Society of Cardiology and the North American Society of Pacing and Electrophysiology , author. Heart rate variability: Standards of measurement, Physiological interpretation and Clinical use. Circulation. 1996;93(5):1043–65

Malpas SC. , author. Sympathetic nervous system over activity and its role in the development of cardiovascular disease. Physiol Rev. 2010;90(2):513–57