Karpanpatru formulation is a formulation used since long in Gujarat Ayurved University for treating Shvitra (vitiligo). The aim of the present study was to develop standard manufacturing procedure and establish preliminary analytical profile of Karpanpatru roll on. As coconut oil is beneficial for skin and possesses emollient properties; it is used in conversion of the formulation into roll-on to assure uniform application with a target oriented approach and safe handling in view of arsenic content.

Total five batches of Karpanpatru roll-on were prepared from one litre of Karpanpatru Taila for each batch. The ingredients for the formulation after procurement from different sources were authenticated and was prepared following classical guidelines of Sneha Paka and Siktha (Bees wax) was added to prepare roll-on. Organoleptic and physico-chemical analysis of the finished product was carried out to develop preliminary quality parameters. 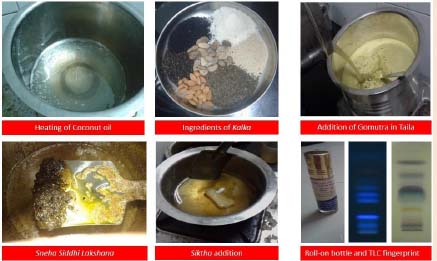 Ayurveda embraces a holistic approach with its gist lying in curing the disease and promoting health of an individual. Ayurveda is unique in its sound foundation of documented theories and operational guidelines. Although Ayurvedic seers have scientifically documented outcomes of pharmaceutico-therapeutic aspects of regular practice and keen observations of medicinal formulations and established theories, still the validation of these theories in terms of modern scientific tools and parameters is needed to assure its credibility and global acceptability. Karpanpatru formulation in powder form has been used effectively since long in the hospitals of Gujarat Ayurved University, Jamnagar. [1] Karpanpatru formulation is derived from a compound name as Karpogi Paste. This is mentioned in Siddha pharmacopeia and has been utilized to treat vitiligo since mid 50’s.[2] Studies were also attempted by modifying into Lepa (medicated paste) and Taila (medicated oil) forms to increase patient compliance and shelf life. [1] The comparative efficacy of the media was assessed by replacing Gomutra (cow urine) with Takra (butter milk) and Kanji (sour gruel).[3] Later studies attempted on converting oil into gel for ease of application, transportation and better acceptability.[4] As the formulation contains Haratala (Arsenic trisulphide); its application using fingertip may pose a risk of dose variation and toxicity. Arsenic toxicity inactivates up to 200 enzymes, most notably those involved in cellular energy pathways and DNA replication and repair, and is substituted for phosphate in high energy compounds such as ATP. Unbound arsenic also exerts its toxicity by generating reactive oxygen intermediates during their redox cycling and metabolic activation processes that cause lipid peroxidation and DNA damage.[5] To minimize this; Karpanpatru formulation was modified into roll-on form that ensures site specific drug application, easy handling and increased stability than liquid dosage forms. Apart from commonly usedTaila (Sarshapa taila) for Sneha Paka of Karpanpatru Taila, in present study, coconut oil was used and converted into roll-on form by the addition of bee’s wax and its in-process standards and quality parameters were established.

Formulation composition of Karpanpatru Taila for batch size of 1 litre

The herbal ingredients were powdered and passed through sieve 40# (BSS). Powder of Haratala was mixed with other ingredients, mixed thoroughly to prepare a homogenous blend. This blend was taken in a stainless steel vessel and cow urine (125 ml per 250 gm of Kalka on an average) was added in sufficient quantity to prepare bolus of Kalka.

Coconut oil was taken in a steel vessel and heated over mild heat maintaining temperature around 90°C for 15 minutes. The vessel was removed from the heating source and allowed to cool slightly. Kalka was added to coconut oil followed by addition of cow urine. Heating was continued for duration of one and half hours per day maintaining temperature in between 100 ± 6°C. The contents were stirred continuously throughout the process to avoid the possibility of settling down of suspended contents and charring. The contents were left undisturbed through the night and heating was continued on the next day. Classical tests of Taila and Kalka for determination of Sneha Paka were conducted. At regular intervals; Kalka was rolled in between fingers to check the consistency. Heating was stopped after observing characteristic features of Taila Paka. It was filtered while hot through clean cotton cloth into sterile stainless steel container. Total five batches of Karpanpatru Taila were prepared [KN], the details of which are presented in Table 3 and 4.

The proportion of Siktha required for Taila was determined with 1/6th, 1/7th, 1/8th and 1/10th part of Taila. KN was taken into a stainless steel container and subjected to mild, controlled heating. When the temperature of Taila reached to 60°C, small pieces of Siktha were added and allowed to melt completely with continuous stirring. The contents were filtered while hot through a clean cotton cloth to separate insoluble particles, if any, possibly present in Siktha. After that, it was stirred continuously till the contents reached to room temperature and the blend became homogenous liquid in consistency. Then it was poured and stored in roll-on bottles. The details of the five batches of Karpanpatru roll-on prepared are presented in Table 5.

Observations and results of Karpanpatru Taila

Standardization is an essential factor for medicinal formulations in order to assess their quality based on the concentration of chemical or bioactive marker.[8] The use of fine powder in Kalka reduces the final yield of the Taila[2] and also increases the chances of passing through the sieve during filtration, increasing turbidity of Siddha Taila leading to reduction of its shelf life. Hence ingredients were powdered and passed through sieve 40# BSS. Mild fragrance of coconut oil was perceived when it was heated to attain moisture free state. After being free from moisture, colour of Taila became darker. During this period, popping sound was perceived along with slight bubbling. The popping noise denotes the water leaving the Sneha, which quickly got subsided. Frothing was noted in initial hours of boiling after addition of cow urine in oil which may be due to partial emulsification and sudden release of ammonia from cow’s urine. The bubbling in Sneha, on the verge of Sneha Siddhi was because of the moisture inside the Kalka. Cow urine is heavier than coconut oil so, it sank to the bottom and then boiled. The steam thus produced due to more quantity of hot oil and very little moisture fragmented into smaller compartments throughout the bolus eventually make bubbles rise suddenly to the surface. The contents were stirred well to allow equal dissipation of heat. Sneha was heated intermittently maintaining temperature in between 100±6°C for approximately 1.5 h/day for four days. On the fifth day, Sneha was heated till the Paka lakshana (completion test for chief desired characteristics) were obtained like Gandha-Varna-Rasotpatti (desired smell, color and taste), Shabdahinata (no cracking sound on fire), Phenodgama (appearance of froth) and Vartivat Kalka (stickiness in bolus to get rolled in to a wick). An average duration of heating per day was decided from pilot batch of the same batch size so as to get Sneha Siddhi Lakshana in five days.[9] The longer duration of interaction of the ingredients and the media was provided with a view to extract more chemical moieties. Repeated boiling causes several oxidative and thermal reactions bringing about a change in the physico-chemical and therapeutic properties in Siddha Sneha. Phenodgama occurred due to presence of unsaturated fatty acids in Taila.

Madhyama Paka of the Siddha Sneha was done so as to extract maximum active chemical constituents. The temperature during the Paka Kala (preparation time) was maintained near about 106°C. By this, reaction between the liquid and fat molecules occurs in a consistent manner over a specific time. This temperature facilitates easy evaporation of liquid molecules with the retention of water soluble extractives, which is slowly imbibed into the Sneha by loosening the bondage in between the fat molecules. The weight of the residual Kalka was comparatively more i.e. an average of 580.6 g than that of initial weight of bolus before heating. Gain in weight may be due to retention of oil by particles of bolus.

The roll-on was prepared with the addition of Siktha in 1/10th parts of Karpanpatru Taila as it was found to be the most appropriate ratio to get the desired consistency from the results of the pilot batch made by incorporating different proportions of Siktha. The homogenous liquid blend was poured into the roll-on bottles and the cap was properly fitted. The organoleptic characters were assessed as shown in Table 6.

All these physico-chemical parameters such as viscosity, specific gravity, peroxide value, iodine value and saponification values are qualitative properties of oils and do not indicate the position of the double bonds or the amount of olefinic carbon but rather it provides an overall status of unsaturation of the oils so it is not possible to point out the position of double bond(s) which are more susceptible to oxidation.[14]

Physico-chemical parameters of Karpanpatru Roll on

The spreadability of the roll-on form was found to be 22mm/10g as shown in Table 9. This indicates that the formulation has a good flow on skin. Ultimate acceptability and clinical efficacy of topical preparations require them to possess optimal mechanical properties (ease of removal from the container, spreadability on the substrate), rheological properties (viscosity, elasticity, thixotropy, flowability) and other desired properties such as bio-adhesion, desired drug release, and absorption.[15] KN was found to be free from fungal and bacterial growth suggesting that KN is free from microbial contamination and contain moisture in negligible limits. Arsenic content was found to be 33.44 ppm. HPTLC study showed same number of spots in the visualizing conditions as shown in Table 10 and Figure 1.

Karpanpatru roll-on prepared with coconut oil solidifies in winter. Coconut oil melts at 24°C (75oF)[16] and is solidified below that temperature. The roll-on had Siktha added to it, which further helped it to solidify in winter. Hence the flow of the roll-on prepared with coconut oil was not identical in all seasons. The rollon needed to be placed in hot water bath to attain a good flow during winter season. Appropriate excipient may be added to maintain the identical consistency of roll-on.

Karpanpatru Taila prepared with coconut oil was light brownish yellow with a characteristic smell and had an average loss of 10.4% on an average and required 9:02 h for preparation. It took 20 min for the preparation of roll-on from Karpanpatru Taila and the yield was 99.51% with addition of 1/10th part of Siktha. The evaluated parameters i.e. moisture content, viscosity and spreadability were 0.148% w/w, 36800cP and 22 respectively of roll-on (Table 9) and 6 spots of HPTLC of KN Roll-on were at 254 nm, 366 nm and 540 nm. 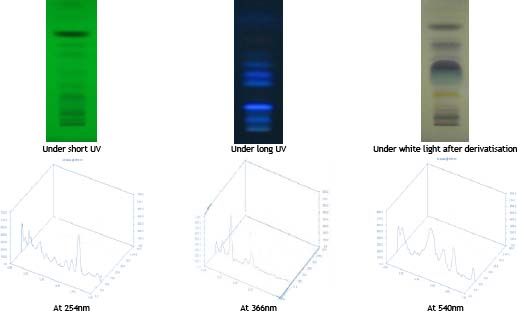 The standard operating procedures for preparation along with quality control parameters of Karpanpatru roll-on with coconut oil observed in the current study may be considered as standards for future studies.

[1] Supported by SOURCE OF SUPPORT

Shailajan S, Singh A, Tiwari B , authors. Quality control and standardization of an Ayurvedic Taila formulation. International Journal of Biomedical Research and Analysis. 2010;1(2):78–81

Manual of methods of analysis of foods- oils and fat. New Delhi: Food safety and standards authority of India, Ministry of health and family welfare government of India. 2016

Wikipedia.org [homepage on the Internet]. Last edited on 23 June 2017 at 23:06. Available from: https://en.wikipedia.org/wiki/Coconut_oil.