Kshara Kalpana is one of the prominent and widely practiced dosage form of Ayurveda. Varied descriptions regarding the method of preparation are available in different classics. Sushruta Samhita mentions the use of either Jala or Gomutra as the solvent. With these facts in place the present study was conducted to find the differences between the two samples. The aim of the study was to prepare two samples of Apamarga Kshara in presence of Jala (AKJ) and Gomutra (AKG) respectively and to do the physico-chemical analysis of the two samples.

The study proved that pharmaceutical processing of the raw drugs imparts characteristic properties to the formulation which are evident by the physico-chemical analysis of the two samples. 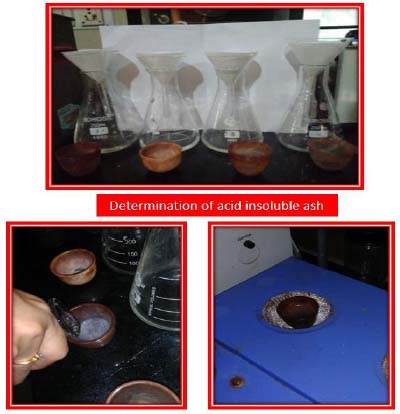 Bhaishajya Kalpana, the science of Ayurvedic Pharmaceutics primarily aims at the fortification of the medicaments and formulations thereby increasing their potency by exposing them to different Samskara[1]. Conversion of the raw drug into a formulation helps in increasing the clinical efficacy as well as it renders it feasible for the administration to a patient. Kshara Kalpana is one such formulation, where the alkali present in the ash of the selected plants is extracted[2] and given the shape of a formulation. Vivid description regarding the preparation of Kshara is available in the classics, whereby many differences of opinions are also evident. Kshara is obtained by soaking the ash of the plant in suitable liquid medium. Sushruta Samhita mentions Jala and Gomutra being utilised as the liquid media to extract Kshara[3]. Ayurveda has described various evaluative procedures to judge the quality of the pharmaceutical products, which are based on the physical qualities of the final product. With advent of the recent advancements in science, there evolved many procedures and tests which could help in proper judgement of the properties and quality of the Ayurvedic drugs. These tests express the quality of the drug quantitatively and hence it makes feasible even for a layman to get an idea of the quality, purity and strength of the formulation. Keeping this in mind the two samples i.e. Apamarga Kshara with Jala (AKJ) and Apamarga Kshara with Gomutra (AKG) were evaluated in terms of organoleptic characters, physico-chemical parameters and the results were recorded.

Apamarga required for the study was collected from S.D.M. Ayurveda Pharmacy, Kuthpady, Udupi during the month of February 2016. Fresh potable water was used for the preparation, while fresh Gomutra was collected locally from Udupi.

The preparation was carried out following the method mentioned in Sushruta Samhita[3]. 12 kg of Apamarga was collected, which was cut into small pieces and then kept in sunlight till it became completely dried. The weight of the Apamarga was found to be 8 kg after drying. It was then burnt completely and 900 g of greyish white coloured ash was obtained. It was divided into two equal parts to prepare AKJ and AKG samples. The ash was then soaked in six times of Jala, macerated and stirred well. Then allowed to stand for few minutes and filtration was carried out for 21 times. The filtrate thus obtained was kept on heat source till the Kshara was obtained in the form of flakes adhering to the base of the vessel. Similarly AKG sample was prepared by soaking the ash in fresh Gomutra.

The physico-chemical analysis of the two samples was done at S.D.M. Centre of Research in Ayurveda and Allied Sciences, Kuthpady, Udupi. Organoleptic characteristics like colour, odour, taste and consistency were recorded along with the evaluation of the parameters like loss on drying, total ash, water soluble ash, acid insoluble ash, pH, water soluble extractive value and alcohol soluble extractive value by following standard procedures[4].

The quantity of AKJ and AKG samples obtained were 210g and 290g respectively. The higher quantity of AKG sample suggests that the solids present in Gomutra were also precipitated along with the Kshara present in the ash of the plant. The colour of AKJ sample was whitish while AKG was brownish in colour. The Brownish colour of the AKG was probably due to the presence of the pigments present in the Gomutra. The taste of both the samples was acrid but AKG was relatively more acrid. The acrid taste suggests the presence of alkali present in a sample. The relatively more acrid taste of the AKG was probably due the presence of alkali compounds present in Gomutra which were also present in the sample. The AKJ sample emitted a peculiar smell of an alkali while the AKG sample still retained the smell of Gomutra indicating the presence of the components of Gomutra present in it. Both the samples were obtained in the form of thin flakes and coarse powder. The organoleptic characters of the two samples are shown in Table 1.

Organoleptic characters of the two samples

pH depicts the relative acidity or alkanity of any sample. The pH of both the samples was found to be 10 which clearly intimates about the alkaline nature of the Kshara.

Water soluble extractive value for both the samples was found to be 100%. The results obtained from the test depicts that both the samples consisted of the constituents which are completely soluble in water. This is in perfect compliance with the classics where it is been told that Kshara is extracted from the ash of the plant after soaking it in water. So the 100% value of water soluble extractives is justified.

The alcohol soluble extractive value for AKJ and AKG were 2.42% and 15.47% respectively. The result obtained from the test depict that both the samples had few of the constituents which are soluble in alcohol. When the values were compared it was found that AKG sample had greater value than that of AKJ sample. This difference may probably be due to the components of Gomutra which show solubility in both water and alcohol. The results of physico-chemical analysis are tabulated in Table 2.

Studies have advocated for repeated washing of the ash as Kshara can be obtained after subsequent washing also. The quantity of Kshara obtained will be less as compared to the first wash still to extract the whole of Kshara repeated washing may prove to be beneficial.[5] Apamarga Kshara has also proven its utility in clinical management of Shwitra (vitiligo).[6] Apamarga Kshara is one of the basic medicament utilised in the preparation of Ksharasutra which is known to be a boon in the management of Bhagandara (fistula-in-ano). Ksharasutra prepared from Apamarga Kshara has shown better results than the one prepared by Snuhi Ksheera alone. [7] Apamarga Kshara is also helpful in successfully managing the conditions of Arsha (haemorrhoids) when applied locally (Ksharapatana).[8]

With the present study it could be concluded that pharmaceutical processing imparts specific qualities to a formulation which helps in the fortification of the clinical efficacy. Kshara sample prepared with Gomutra can be considered to be more stable when loss on drying is taken into consideration. It also possesses few components of Gomutra which may also have therapeutic activity of their own. A clinical study may further elucidate comparative efficacy of the two samples of Kshara.

Results of physico-chemical analysis of the two samples

The authors are thankful to SDM Centre for Research in Ayurveda and Allied Sciences, Udupi for providing essential facility and support for the study.

Selection of the topic after thorough study of the literature was done by Dr Angadi. Dr Shiv Om executed the experiments. Dr. Sunil Kumar helped in deciding the various parameters for the analysis of the two samples and contributed to editing of the manuscript to the acceptable form.