Garcinia indica Choisy is the most commonly accepted source of Vrukshamla, which is one of the commonest herbs mentioned in classics of Ayurveda. G. indica is also known as kokum butter tree as its seeds yield an oil, which remains solid at room temperature. This extracted oil from the seeds of Vrukshamla is used by folklore Vaidyas in Western Ghats of India to treat various skin ailments like dry skin conditions, cracked heels etc.

The present study has been undertaken to evaluate and analyze the Vrukshamla beeja taila (VBT) by standard oil parameters, including HPTLC.

The sample of VBT was solid at room temperature, having yellowish/off-white colour and characteristic odour. Its analytical study showed the presence of fatty acids as esters, which were fresh and not rancid. TLC photo documentation revealed presence of many phyto-constituents with different Rf values. HPTLC densitometric scan of the plates showed numerous bands under 254 nm, 366 nm and 620 nm (after derivatisation). On photo documentation, there were 3 spots under 254 nm, 4 spots under 366 nm and 12 spots under 620 nm post-derivatisation with vanillin sulphuric acid spray reagent.

This study will serve as a standard reference for preliminary identification of VBT.

Garcinia indica Choisy (Figure 1), syn. G. purpurea Roxb. And Brindonia indica Dupetit-Th. (Family Clusiaceae) is the most commonly accepted source of Vrukshamla, one of the commonest discussed drugs in the classics of Ayurveda. The species was firstly described by Dr. Garcia in 1574, hence the genus name is Garcinia and as it’s endemic to India, the species name is indica. The word purpurea is originated from a latin word Purpura, means purple colour; as the colour of its ripe fruit.[1-3] It’s a small, slender, fruit-bearing tree, having very strong and sturdy growth; leaves are approximately 10 cm × 5 cm in dimensions; having red-tinge, when young, which turns in dark green on maturation; oblong, ovate or elliptic-lanceolate, rarely obtuse; glabrous, membranous, mucronate; with rounded, acute or abruptly acuminate apex and narrowed it base. Petiole is up to 0.7 cm long. Flowers are polygamous. Male flowers are 3 to 8 in number, axillary and/or terminal fascicles, solitary or in a spreading fascicles; with 4-sepals, decussate, outer ones smaller than inner sepals; whereas female flowers are sessile/sub-sessile, solitary or 2 to 3 together, terminal, shortly peduncled.[4,5] Flowering season is November to February. Fruits, commonly known as kokum fruits, are globose and resemble a small apple in size, not furrowed/grooved.[4] 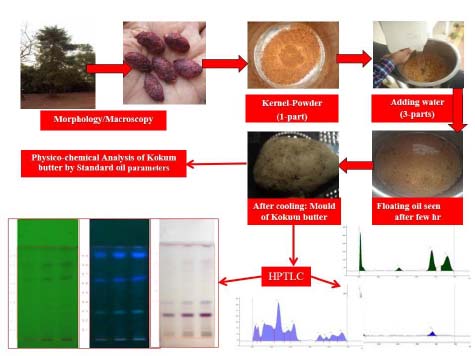 It’s green, when unripe and turns dark red/purple on maturation, which usually happens by April/May in each year. Fruit-pulp is dark in colour and little-sweet in taste. Each fruit contains 5 to 8 big, flat seeds embedded in juicy pulp.[1] The seed coat is fibrous from outside; each seed is dicotyledonous, reniform-shaped and has a dimension of about 1.875 cm × 1 cm, which contains 23% to 26% (c. 44% on the weight of kernels) oil.[6] Extracted seed-oil, known as kokum butter, remains solid at room temperature.[1] It’s sold in market in form of oval-shaped moulds/lumps or cubical cakes. Its colour is grayish/yellowish white and granular, greasy consistency.[6] There are two methods of extraction of kokum butter from the seeds, viz. the traditional boiling method and the churning method.[7] Kokum butter is a specific remedy in dysentery and mucous diarrhea, administered in doses of 1 tola in a quarter seer of milk thrice a day until complete recovery; it’s useful in Phthisis pulmonalis and some scorbutic (skin) diseases. It has been recommended as a substitute for cod-liver oil, and is eaten by poor people as a substitute for ghee. Externally, oil has a healing property and might be usefully employed as an application to ulcerations, fissures of lips, hands, chapped skin, etc.[8]

In this study the kokum butter was prepared by traditional boiling method and analyzed for standard oil parameters.

Traditional boiling-method was followed in this study; for which the collected seeds were dried completely under sunlight. Thereafter, the kernels were obtained by removing the seed-coat manually. Kernels were further subjected to trituration with sufficient quantity of water, for the preparation of paste. That was mixed with 3 litres of water (per kg of seed-kernel) in a vessel and subjected to heat on mild flame for very long time. After some time, a layer of oil started floating on the water, which was skimmed off and taken into another vessel. This second vessel was also simultaneously subjected to the heat on the other stove, until the remnant of water evaporates and the oil remains alone. This oil was allowed to cool down at room temperature and solid Kokum butter was obtained. Heating the first vessel was continued until no or negligible quantity of oil floated. Obtained quantity of Kokum butter was 40 gm per kg of seed-kernel. 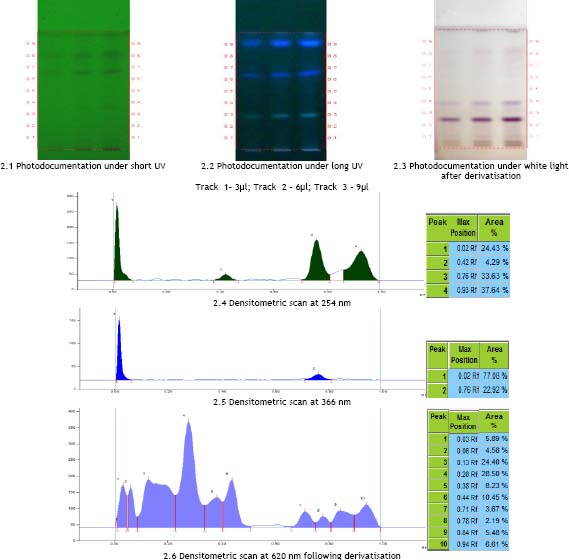 This documented analytical study of VBT can be used to judge the adulteration and purity of it, as it was performed by standard oil parameters. HPTLC fingerprinting will help to supplement information in regard to its identification and standardization.

The authors are thankful to SDM Centre for Research in Ayurveda and Allied Sciences, Udupi for providing essential facility and support for the study.

[1] Conflicts of interest SOURCE OF SUPPORT