Adult Balb/c mice, aged 8–12 weeks and weighing 30–40 g, were divided into five groups. Four groups were administered Candida albicans via intravaginal inoculation with a diluted dose of 10-2/ml and were treated with either MLE, a placebo, or ketoconazole; one group constituted the healthy control and was only treated with MLE. Real-time PCR was used to measure the expression of IL-37.

Fungiostatic effect of MLE 750 mg/kg BB is not less than ketoconazole and MLE may act as anti-inflammatory throught its role as an antioxidant so it could potentially be used as an alternative treatment in humans especially patients with vulvovaginal candidiasis.

C. albicans is a fungus that constitutes part of the normal human microbiome but in certain circumstances can cause systemic candidiasis infections.2 That may be life threatening.3 The mechanisms involved in the spread of C. albicans infection are not fully understood, and the classification of antifungal medicines is incomplete.4,5 The increasing number of C. albicans strains that are resistant to the azole class of antibiotics is a challenge in the treatment of candidiasis.6 In addition, the use of certain antibiotics, such as derivatives of imidazole, nystatin, amphotericin, and ketoconazole, can cause side effects such as nausea and dizziness.7 In many developing countries, especially Indonesia, people believe that alternative treatments using natural materials such as miana leaves can be effective in the treatment of diseases caused by fungi or bacteria.

In vitro research has been show to exhibit anti oxidative, anti-inflammatory and anti alergi activitasin mammalian system. An ample amount of work has been reported on micro propagation of different Coleus spp. From different plant like shoot tips, leaf segment, nodal and intermodal segments.8 Immunostimulant therapy with MLE, which is thought to possess anti-inflammatory properties, is the latest approach in alternative medicine to treat vulvovaginal candidiasis infection without any known side effects. This is a promising approach considering that the disease remains prevalent in Indonesia.

It has recently been reported that the cytokine interleukin-37 (IL-37) is an immune mediator with anti-inflammatory activity.9 And this cytokine IL-1 derivative has been identified as a natural inhibitor of the non-specific immune system.10 The mechanism of action of cytokine IL-37 remains elusive but its pro-inflammatory properties have been reported to be induced in transgenic mice in response to lipopolysaccharide.11 In this study, the relationship between MLE and IL-37 gene expression is examined in a mouse model of vulvovaginal candidiasis infection.

Miana leaves were obtained from the Research Institute for Spices and Medicinal Plants (Balai Penelitian Tanaman Rempah and Obat (BALITRO), Bogor, Indonesia). The leaves were subjected to an extraction process using ethanol as the solvent in accordance with a method reported.12 The MLE obtained was used at doses of 500 and 750 mg/kg b.w.

The fungal load was examined by taking a vaginal swab, diluting, and then culturing in a cup for 2, 3, 5, and 14 days. After culturing the number of colonies were counted.

Total mRNA was isolated from blood samples using standard methods and was then kept at −80°C before quantitative real-time RT-PCR using a commercial kit (Applied Biosystems) according to the manufacturer’s instructions. Primers used for amplification of the IL-37 gene were forward: 5ʹ-CAGCCTCTGCGGAGAAAGGAAGT-3ʹ, andreverse:5ʹ-GTTTCTCCTT CTTCAGCTGAAGGGATGGAT-3ʹ, GAPDH forward: 5ʹ-ATGAGTATGCCTGCCGTGTG-3ʹ, and GAPDH reverse: 5ʹ-CCAAATGCGGCATCTTCAAAC-3ʹ. Expression of the GAPDH gene was analyzed as a control.9 All PCRs were repeated three times and the data were analyzed using the instrument detection system Mx4000 and the comparative threshold cycle method. A standard curve was constructed (Applied Biosystems) and indicated good amplification efficiency (90%–100%).

Data are expressed as the mean ± SE. To assess differences in IL-37mRNA expression between groups the ANOVA test was employed using the SPSS 23 software. Statistical significance was considered as p<0.05.

This study was approved by the Health Medical Research Ethics Committee at the Faculty of Medicine, Hasanuddin University (Makassar, Indonesia) with registration number UH16010010, 11 March 2016.

Our results showed that Balb/c mice inoculated with C. albicans and an MLE dose of 750 mg/kg b.w. (CVM750) had significantly increased IL-37 mRNA expression (p>0.05) compared with those treated with 500 mg/kg b.w. MLE (CVM500) after 14 days of treatment; the placebo group showed no significant increase (Figure 1). The healthy control mice (M500) showed no alterations in IL-37 mRNA expression, despitean MLE dose of 500 mg/kg b.w. interestingly, the increase in mRNA IL-37 expression in the CVM750 group was similar to that observed in mice treated with ketoconazole (CVC200). These findings indicated that a component within MLE may mediate its anti-inflammatory characteristics, as indicated by the increase in mRNA IL-37expression in mice inoculated with C. albicans. 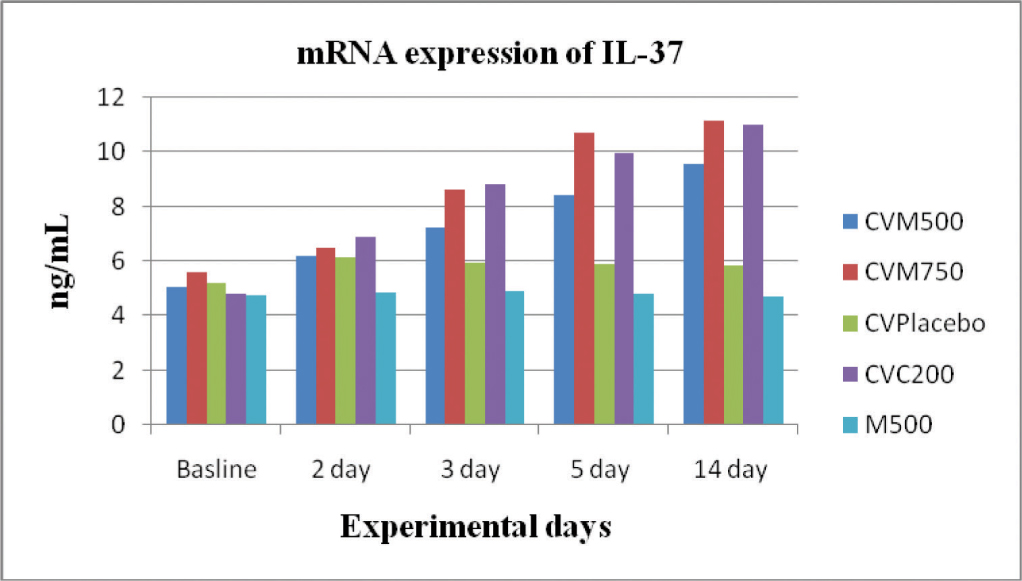 Fungal load in the five groups of Balb/c mice. The mean fungal load in all of the treatment groups induced by C. albicans showed a significant difference (p=0.001) between days 2, 3, 5, and 14. 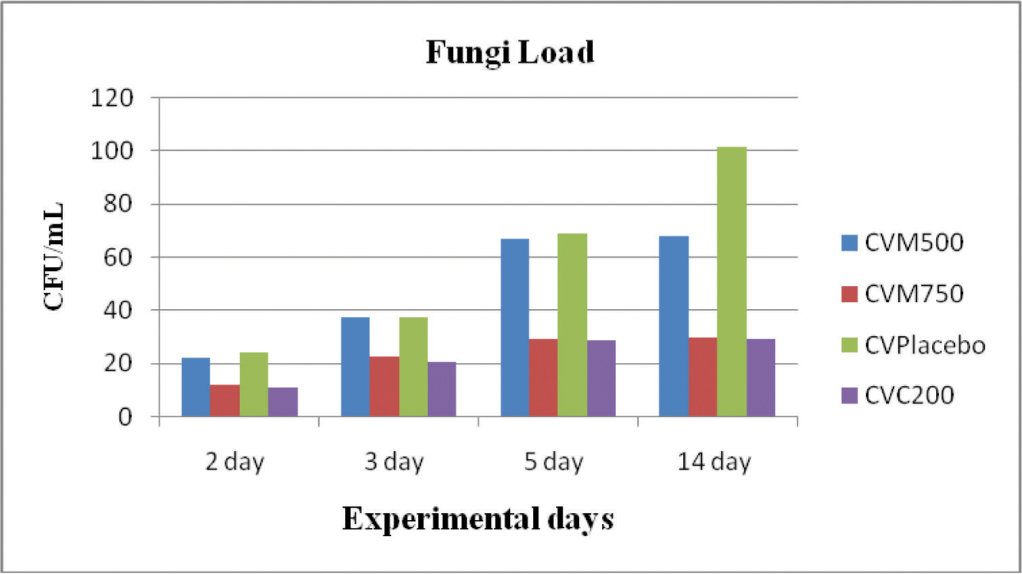 C. albicans is a major cause of vulvovaginitis, which is associated with the loss of acidity in the female genital area.13 The main source of this fungus is the normal flora in the human body and infection is often linked to immunosuppression.14 In immunosuppressed patients, an increased incidence of fungal species can lead to fungemia.15 To provide an optimal and efficient immune response, the body requires antioxidants to prevent and eliminate pathogen invasion.16 Antioxidants such as flavonoids contained within MLE have been reported to increase the number of CD4+ T-cells and IFN-γ levels, and decrease the number of Mycobacterium tuberculosis colonies in the infected lungs of Wistar mice.12 A natural substance containing flavonoids has the potential to inhibit the production of prostaglandin, a pro-inflammatory signaling molecule.17

The findings of our study provided evidence that MLE intervention at a dose of 750 mg/kg b.w. can inhibit the increase in fungal load following challenge with C. albicans, indicating that MLE may be exerting anti-fungal activity. The high fungal load (101.6 CFU) on day 14 in the placebo group indicated that following C. albicans challenge, mice not treated with MLE failed to control the infection.

The mechanism of action of IL-37 remains to be fully elucidated but IL-37 expression has been shown to suppress pro-inflammatory cytokines in experimental animals.11 And exert anti-inflammatory activities.18 IL-37 is cytogenetically located on chromosome 2q13 and its encoded protein comprises 192 amino acids.19 IL-37 is also thought to play a role in dendritic cell regulation, coordinating with the immune response to form a new antigen.20 IL-37 expression in the tissues of patients with inflammatory and autoimmune diseases was reported and one study showed that the anti-inflammatory active components (triptolide and triptonide) regulated by IL-37 most likely operated via the ERK1/2 pathway and p38 MAPK activation.21 IL-37 expression in macrophages and epithelial cells inhibited pro-inflammatory cytokine synthesis, and hence suppressed inflammation and immunity in various diseases.22 Increased production of IL-37 by macrophages and spleen cells was reported to significantly reduce the production of TNF-α during inflammation in mice affected by colitis.22 The consistent increase in IL-37 in spleen cells correlated with the increase in production of anti-inflammatory cytokine IL-10 when exposed to the Candida fungus.23

MLE (at a dose of 750 mg/kg b.w.) significantly increased IL-37 mRNA expression and inhibited the increase in fungal load in the mouse model of candidiasis vulvovaginalis. The anti-inflammatory properties of MLE indicate that this herbal medicine could be a promising alternative therapy to the use of antibiotics for patients infected with vulvovaginal candidiasis. 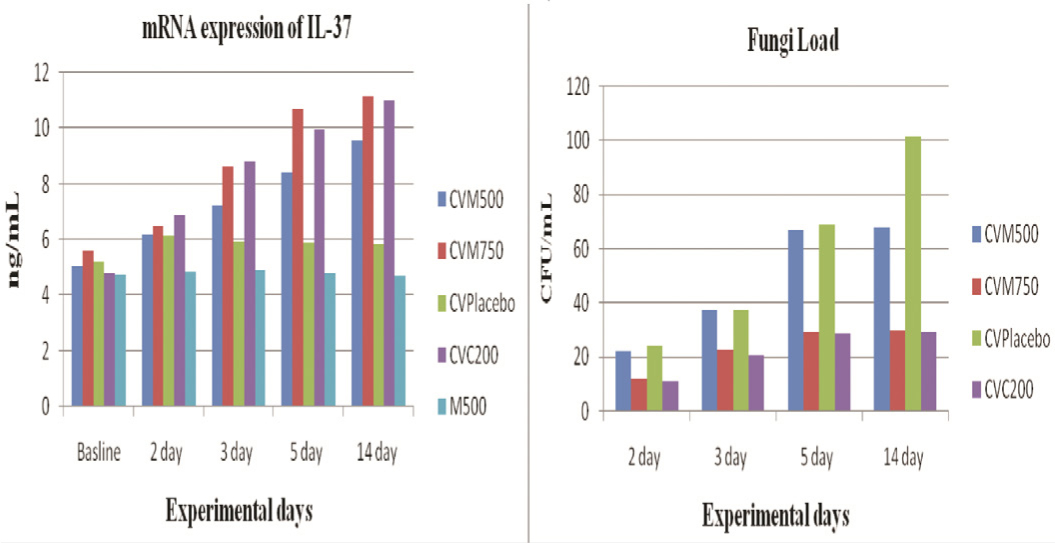 We would like to thank Rommy Usman and Mus (Molecular Biology and Immunology Laboratory for Infection Diseases, Faculty of Medicine, Hasanuddin University, Makassar, Indonesia), and Ibu Cia (Bio Pharmacy Laboratory, Faculty of Pharmacy Hasanuddin University, Makassar, Indonesia) who helped in the implementation of our research activities. This research was financially supported by the Ministry of Research and Technology, Indonesia. 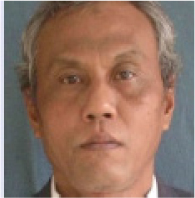