In vitro Antioxidant and Hepatoprotective Activity of Bridelia scandens (Roxb.)Willd

Natural products are emerging out as potent and alternative therapies for many diseases. Today herbs have become the part of mankind, because of its manifold ways in targeting diseased cells with minimal effects on normal cells and tissues. The present research investigated the in vitro antioxidant activity and hepatoprotective of B.scandens leaf. Preliminary phytochemical analysis exhibited the presence of most of the constituent in ethanol extract (BSE). Antioxidant capacity of various extracts of B.scandens was examined. DPPH assay revealed that ethanol extract has a good antioxidant with IC50value of 31.68μg/ml, whereas standard ascorbic acid with 8.78 μg/ml. BSE revealed dose dependent response with increase in concentration for reducing power assay. ORAC assay directly measured the scavenging capacity and BSE (2485 trolox eq/gm) was found to be potent than other extracts. In vitro hepatoprotective activity was performed for BSE using MTT assay in BRL 3A cell line, which revealed nontoxic dose with CTC50 value more than 1000 μg/ml. At the dose 200 μg/ml, BSE and standard silymarin offered cell protection of 57% and 76 % respectively. Present study concludes that B.scandens leaf extract possess antioxidant potential and protect the liver cells against CCl4 damage. However in vivo studies are being carried out to validate the traditional usage of Bridelia scandens.

Medicinal plants are still a potent source of therapeutic agent. These plants and their extracts are being used as natural sources to treat various illnesses.1 People of India have remarkable passion for medicinal plants and its use in healing health related issues. India being populated by a substantial number of tribal groups, with enormous knowledge of using wild plants for remedying human complaints.2 Today liver disease is one of the serious complaints in the world and to maintain a healthy liver is a decisive aspect for the present population. Despite of remarkable improvements in modern treatment for liver disorders, there is no effectual remedy for restoration of liver functions or regeneration of hepatic cells. So, the herbal remedies are in huge demand for developed and developing country for health issues. Nature has bestowed us with herbs, which extends its use for Protection for liver from being injured or assist in revival of hepatic cells with less or no side effects.3

Bridelia scandens belonging to the family Euphorbiaceae, is a perennial herb, native to Southeast Asia, southern China, and the Indian Subcontinent.4 It is used in Ayurveda system of medicine as Pashnubeda.5 Leaf6,7 and stem bark8 extracts is used to treat jaundice. Leaf extract is used to cure allergy,9 treat oral problems.10 Leaf and root extracts are used to treat inflammation, scabies, dermatitis.11Root is also used to cure herpes.12 Bark is used to treat cough, fever and asthma, and also possess hypotensive and hypoglycaemic activity. Fruits are edible. Seeds possess hemagglutinating properties7,13,14Decoction of wood of B.scandens administered orally to treat malaria disease.15

Herbal based therapies for the liver diseases are used from long time ago and are popular world over. Still, there is no potent and effective drug available to stimulate hepatic cells and help in revival to perform vital functions. Based on the tribal usuage of leaf of Bridelia scandens and medical practitioners to treat jaundice and other ailments, present study has been carried out to investigate antioxidant and antihepatotoxic activity by using in vitro parameters.

Bridelia scandens was collected from Biligiri Rangana hills (BR hills) of Chamarajanagar district, Karnataka, India. Authenticated by Dr. Shiddamallayya N, at National Ayurveda Dietetics Research Institute, Department of AYUSH, Govt. of India, Bangalore and was deposited for future references (No: RRCBI-MUS-10121). Leaf material was shade dried, powdered and extracted successively with petroleum ether, chloroform and ethanol using soxhlet apparatus and water extract by refluxing the marc in waterbath. All the extracts of B.scandens were filtered and solvent was evaporated by using rotary evaporator.

DPPH radical scavenging assay is a discoloration assay, upon reaction with hydrogen donor changes purple to yellow colour. It is evaluated by the addition of the antioxidant to a DPPH and was performed as described by cuendet et al 199721 taking ascorbic acid as standard. 4.0ml (0.2mg) of DPPH solution in methanol was added to 1 ml of various concentrations (7.62 -250μg) of plant extracts. After 30 mins of incubation period at room temperature the absorbance was read at 517 nm.

The capacity of the plant extracts to reduce iron III was measured by using different concentrations (50-300 μg/ml) and standard ascorbic acid. Add 2.5 ml of 0.2M phosphate buffer pH 6.6 and 2.5 ml of 1% aqueous potassium hexacyanoferrate solution. Incubate for 30mins at 50°C, add 2.5 ml of 10% TCA (trichloroacetic acid) and centrifuge at 3000 rpm for 10 mins.Collect 2.5ml of supernatant and mix it with 2.5 ml of water and 0.5 ml of 0.1% aqueous FeCl3.The amount of iron ferricyanide complex could be determined by measuring the formation of perl’s Prussian blue at 700 nm.22 A higher absorbance indicates higher reducing power.

In the present study BRL3A(Buffalo Rat liver cell line) cell line was used to assess the hepatoprotective function of potent extract (BSE). BRL3A was obtained from National Centre for Cell Sciences (NCCS), Pune, India. It was cultured in DMEM (Dulbecco’s modified eagles medium), supplemented with 10% inactivated fetal Bovine serum(FBS),100IU/ml of pencillin,100 μg/ml of streptomycin and 5 μg/ml amphotericin in an humidified atmosphere of 5% CO2at 37°C until confluent. Later the cells were dissociated with TPVG solution containing 0.2% trypsin, 0.02% EDTA, 0.05% glucose in PBS. Stock cultures were grown in 25cm2culture flasks and study was carried out in 96 microtitre plates.

Stock solution of 10 mg/ml concentration of plant extract was prepared by dissolving sample in DMSO and then volume was made upto with DMEM, supplemented with 2% inactivated FBS. Stock was serially diluted to get lower concentrations.

MTT assay was carried out for ethanol extract of B.scandens to assess its nontoxic doses. A monolayer cell culture was trypnised and count was accustomed to 1.0 × 105 cells/ml using DMEM containing 10% FBS. Approximately 10,000 cells (0.1 ml diluted suspension) were added to each 96 well microtitre plate. After 24hrs, supernatant was flicked off to form a partial monolayer of cells and was washed with medium. 100μl of different test concentrations (62.5-1000 μg/ml) was added to each well and then incubated at 37°C for 3 days in 5% CO2 atmosphere. Microscopic examination and observations were noted in 24hrs time interval. After 72hrs, test samples were disposed and MTT in PBS (50 μl) was added to each well. Again incubated at 37° C for 3 days in 5% CO2 atmosphere, supernatant was removed, 100 μl of propanol was added and the plates were gently shaken to solubilize the formed formazan. Microplate reader at a wavelength of 540 nm was used to read the absorbance and percentage of growth inhibition was calculated using the formula. CTC50, concentration of test drug needed to inhibit cell growth by 50% is generated from the dose-response curves for test samples.

Non-toxic or safe concentration chosen was ethanol extract for B. scandens to determine antihepatotoxic property. The protocol was followed as mentioned for MTT assay. To nontoxic test concentration (50 μl), add 50 μl of DMEM with nontoxic concentration (1% CCl4) of toxicant were added. Micro plate reader was used to measure the absorbance at a wavelength of 540 nm and percentage cell viability was determined. Based on which the Percentage protection offered by plant extract and standard silymarin was calculated over the DMSO control.

Since ethanol extract (BSE) proved to be a good antioxidant, it was further considered to test its hepatoprotective ability on BRL3A cell line. 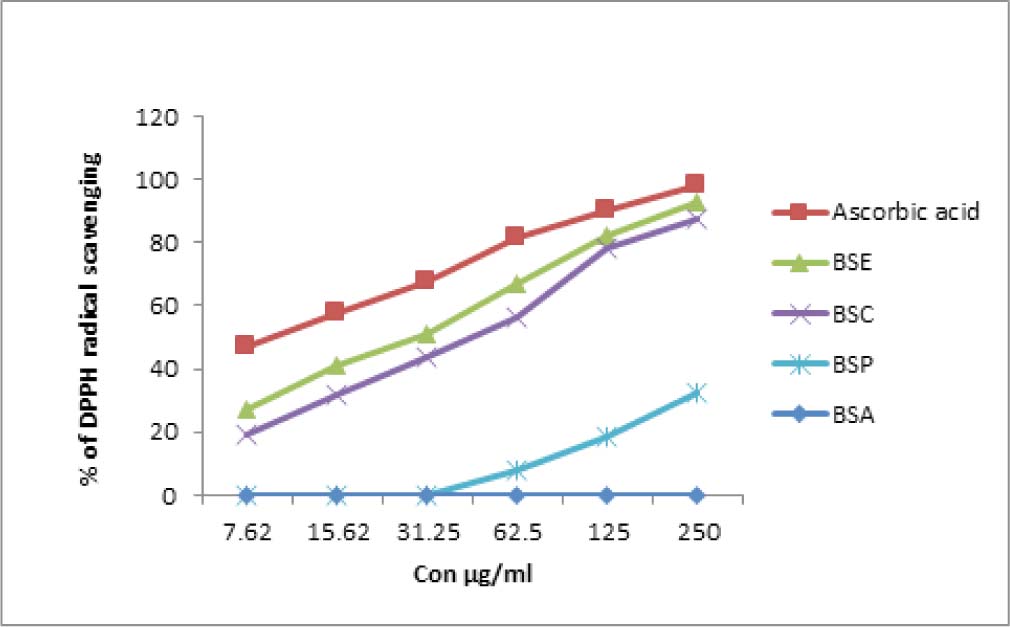 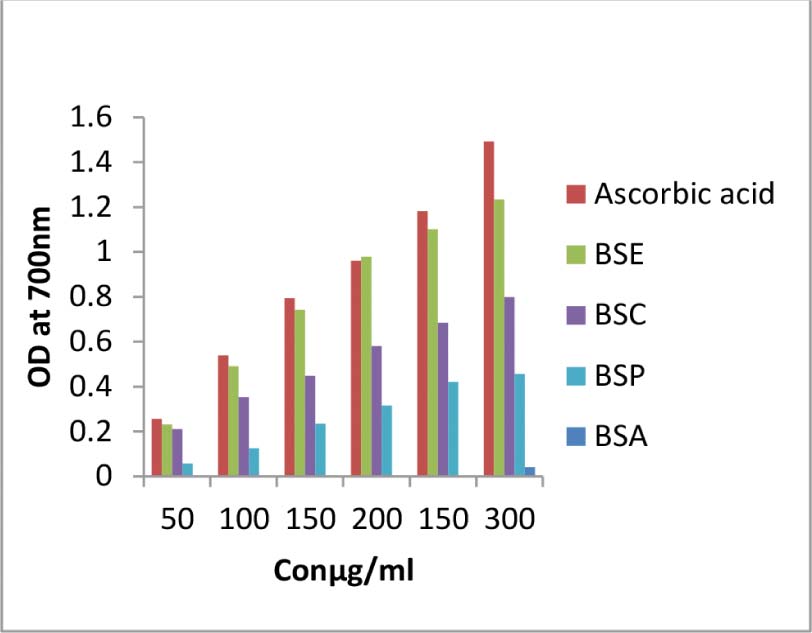 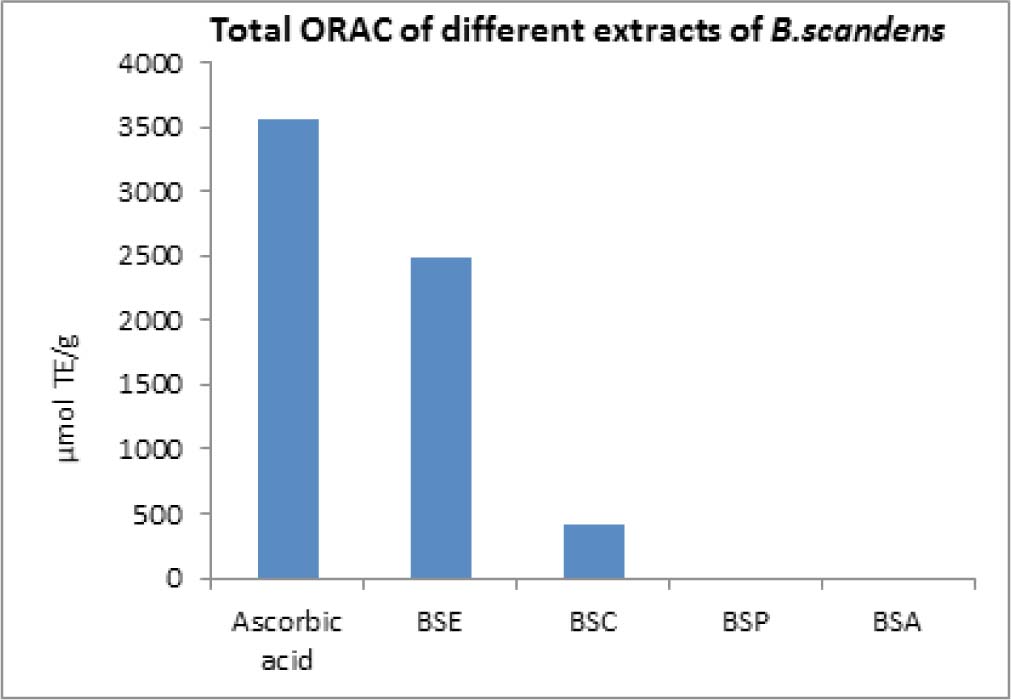 In the present investigation phytoconsituents of various extracts of B.scandens was examined. In vitro antioxidant potential, cytotoxicity and hepatoprotective activity of B.scandens was evaluated. The chemicals and drugs used in the routine life damage liver cells by inducing lipid peroxidation and altering the cellular redox state piloting to oxidative stress/damage in the system. Reactive oxygen species (ROS) produced due to this stress initiate and regulate the progression of liver diseases. The inequity between the ROS production and antioxidant defense mechanisms leads to oxidative stress. This impacts the transcription of various biochemical mediators, which can modulate other affairs in the system like cholestasis, apoptosis, fibrosis, and regeneration. This leads to different types of liver diseases.27,28

These medicinal plants are always beneficial for mankind by resolving the health issues and various studies has been conducted on traditional medicine to develop new drug for antioxidant and hepatoprotective activity.29

Ethanol extract of B.scandens has phytoconstituents like phenols flavonoids, tannins, alkaloids. In the present findings, in vitro antioxidant activity of different extracts revealed that, compare to all the extracts used, ethanol extract is having a good scavenging and reducing capacity. ORAC assay analyse scavenging of peroxyl radical. This also examines the antioxidant capacity of all the antioxidants present in the test.23,30 ORAC results revealed that ethanol extract of B.scandens as potent antioxidant than other extracts, indicating the direct measure of antioxidant ability of the extract. As the value of ORAC increases, antioxidant competence also increases and vice versa.31,32 Antioxidants from natural products detoxify the toxins, scavenging of free radicals, removes excess ROS and anti-lipid peroxidation.33 Antioxidant activity of BSE proves that leaf of B.scandens can be used to treat liver disease.

The cell line testing for hepatoprotective activity is a primary level screening, used to investigate medicinal plants. In vitro cytotoxicity and hepatoprotective activity in BRL3A cell line (functions as rat liver cells) was carried out for BSE. MTT, tetrazolium dye is used widely to assess the cell viability and also used to determine nontoxic dose for BSE and found to be above 1000 μg/ml.CCl4induced hepatotoxicity is a widely used and accepted model to test protective role of the drug because of variation associated with CCl4 – induced liver injury is similar to that of acute viral hepatitis.31,32,33CCl4 is activated by cytochrome P450dependent monooxygenases to form trichloromethyl radical and trichloromethyl peroxyl free radical. These free radicals lead to severe liver damage. B.scandens tells about its traditional usage to cure liver disease, thus BSE at 200μg/ml have tried to protect the liver cells from CCl4 damage. This may be due to the antioxidant potency of the BSE and its phytoconsituents.

Medicinal plants are always beneficial for mankind by resolving the health issues. Leaf of B.scandens used traditionally to cure liver disease like jaundice proved to be efficient in shielding the liver cells by its strong antioxidant potential and protecting the normal cells. Detailed in vivo studies on liver protection activity are in progress to support the data obtained. 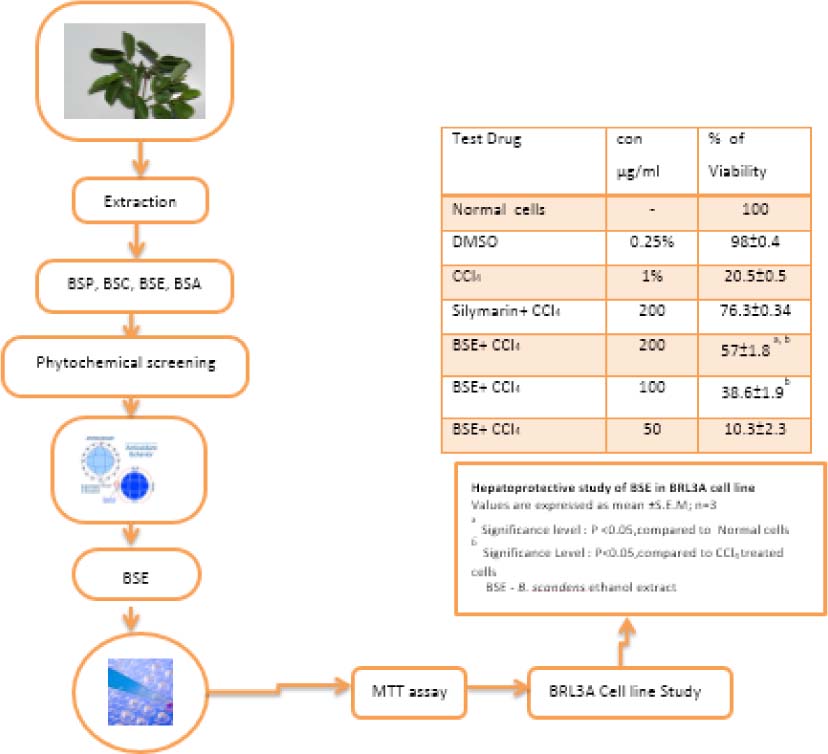 Authors are thankful to Dayananda Sagar Insitutions, Bangalore, for providing facilities to carry out the present work.

[5] Conflicts of interest CONFLICT OF INTEREST The authors declare no conflict of interest.

Sankaranarayanan AS , author. Folk-lore medicines for jaundice from Coimbatore and Palghat districts of Tamilnadu and Kerala, India. Anc Sci Life. 1988;7(3-4):175–9

Huang D, Ou B, Prior RL , authors. The chemistry behind antioxidant capacity assays. Journal of agricultural and food chemistry. 2005;53(6):1841–56