Caesalpinia bonduc (L.) Roxb are traditionally used in Indonesia to treat various diseases, but still limited study about different part of this plant.

The aim of this study was to screen the phytochemicals, to evaluate the total flavonoid and total phenolic contents as well as antioxidant activity of ethanol extract of root, stem, leaves, and seed kernel of C. bonduc.

Genus of Caesalpinia comprise more than 500 species, which have many beneficial effects for humans health based on their pharmacological activity.1 One of medicinal plant from this genus was Caesalpinia bonduc (L.) Roxb (syn. Caesalpinia bonducella (L.) Flemming, Caesalpinia crista (Linn)), from Fabaceae family.2,3 This plant was grown in Indonesia, which is one of country in the world with rich source of medicinal plants.4 C. bonduc also distributed in other tropical and subtropical part of Asia, such as India, Shrilanka, Vietnam, China, Myanmar and Bangladesh.5 In Indonesia, C. bonduc known as Bagore, Kalici, Tinglur, Areuy Matahiang.6,7

C. bonduc is thorny perennial shrub with length reach of 15 m, stems are covered in curved spines. It’s about 2 cm gray seeds known as nicker nuts. The kernel is about 1.23- 1.75 cm in diameter with hard, pale yellowish – white, circular to oval, furrowed and ridged surface. Branches are armed with hooked and straight hard yellow prickles. Leaves are bipinnate, 25-40 cm long and petioles prickly. Leaflets 7-9 pairs, ovate-elliptic, 1.5-3.5 × 1-2 cm, glabrous above, and pubescent below. Stipules are foliaceous. Peduncle is long, 3 to 4 cm, prickled, bracts long, linear-lanceolate and deciduous. Pedicel is 0.5-1.5 cm and very short in bud.2,7,8 Each part of the plant as seen in Figure 1.

Whole plant of the C. bonduc contain steroidal saponins, fatty acids, hydrocarbons, phytosterols, isoflavone, amino acids and phenolics.2 Caesalpinins H—P and norcaesalpinin F were isolated from the CH2Cl2 extract of the seed kernels of Caesalpinia crista, together with 13 known diterpenes.9

In Indonesia, seed kernel of this plant traditionally used for cough, malaria, and as anthelmintic.6,10 Leaves for inflammation and liver disease, and the root was used for gastric and blood disorder.6,7 Part of C. bonduc possesses several activities such as anthelmintic, antimalaria, antidiabetic, antioxidant, antibacterial, antimalarial and antidiarrhoeal.2,11,12

Antioxidants could be used for management of some pathophysiological conditions, which involve free radical, such as cardiovascular and neurodegenerative disease.13 One established in vitro method to evaluate antioxidant activity was DPPH scavenging activity. This method is furthermore rapid, not involved with many steps and reagents, and inexpensive compare to other method.14 Flavonoid and phenolic compounds may be useful as antioxidant from natural sources. Distribution of phenolic compounds varies between different parts of plant.15

According to the literature search, phytochemical and antioxidant activity of different parts of C. bonduc have never been comparatively evaluated. The study was carried out to screen the phytochemicals as well as to evaluate total flavonoid contents, total phenolic contents and antioxidant activity of root, stem, leaf and seed kernel ethanolic extract.

The plants materials were collected and cleaned, dried at room temperature, crushed into powder and stored in an air tight glass container. Fifty g of powdered samples was extracted by reflux using 70% ethanol as the solvent for 2 h and repeated 3 times. The extracts then evaporated using a vacuum rotatory evaporator, and then dried in water bath on 50°C.

The percentage yield of the extract was determined using the dry weight of extract (a) and soaked samples material (b) using the formula:

The extraction yield was calculated for each extract.

Total flavonoid content was determined by aluminium chloride colorimetric assay adapted from Chatatikun et at18 and Roy et al19 with slight modification. Standard solution of quercetin in concentration 30,40,50,60,70,80,90,100 μg/ml were prepared in 96% ethanol. 50 μl of extracts (1 mg/ml) or standard solution was added to 10 μl of 10% the aluminium chloride solution and followed by 150 μl of 96% ethanol. 10 μl of 1 M sodium acetate was added to the mixture in a 96 well plate. 96% ethanol was used as reagent blank. All reagents were mixed and incubated for 40 min at room temperature protected from light. The absorbance was measured at 415 nm with a microplate reader (Versamax Microplate Reader, USA). Total flavonoid contents were expressed as mg Quercetin Equivalents (QE) per g of plant extract.

The microplate total phenolic content method was based on the 96-well microplate Folin–Ciocalteu method adapted from Ahmad et al 20 with some modifications. A total of 25 μL of the diluted extract of each part of C. bonduc were mixed with 100 μL of 1:4 diluted Folin–Ciocalteu reagent and shaken for 60 sec in a flat-bottom 96-well microplate. The mixture was left for 240 secs and then 75 μL of sodium carbonate solution (100 g/L) were added and the mixture was shaken at medium continuous speed for 1 min. After 2 h at room temperature, the absorbance was measured at 765 nm using the microplate reader (Versamax Absorbance Microplate Reader, USA). The absorbance of the same reaction with ethanol instead of the extract or standard was subtracted from the absorbance of the reaction with the sample. Gallic acid dilutions (10–200 mg/L) were used as standards for calibration. Total phenolic contets were expressed as mg Gallic Acid Equivalents (GAE) per g of plant extract.

DPPH scavenging ability assay was used to evaluate the antioxidant activity of each extract. Test was conducted in a 96-well plate according to Zahratunnisa et al.21 with slight modification. 20 μL stock solution of extracts in different concentrations (100, 500, 1000, 1500, 2000 ppm) and 180 μL of DPPH solution 0.147 mM were added to each well. After 30 min incubation at room temperature in dark room, absorbance was read at 517 nm using micro-plate reader of Versamax Microplate Reader (USA). Methanol was used as blank. The scavenging ability (%) was calculated as follows:

Ascorbic acid was used as positive standard. All tests were performed in triplicate. Concentration of samples resulting in 50% inhibition on DPPH (IC50 value) were calculated.

The extracts were further investigated to determine phytochemical compound in the extract. The common phytochemistry content from plant such as flavonoid, alkaloid, terpenoid, steroid, tannin, and saponin have identified (Table 1). 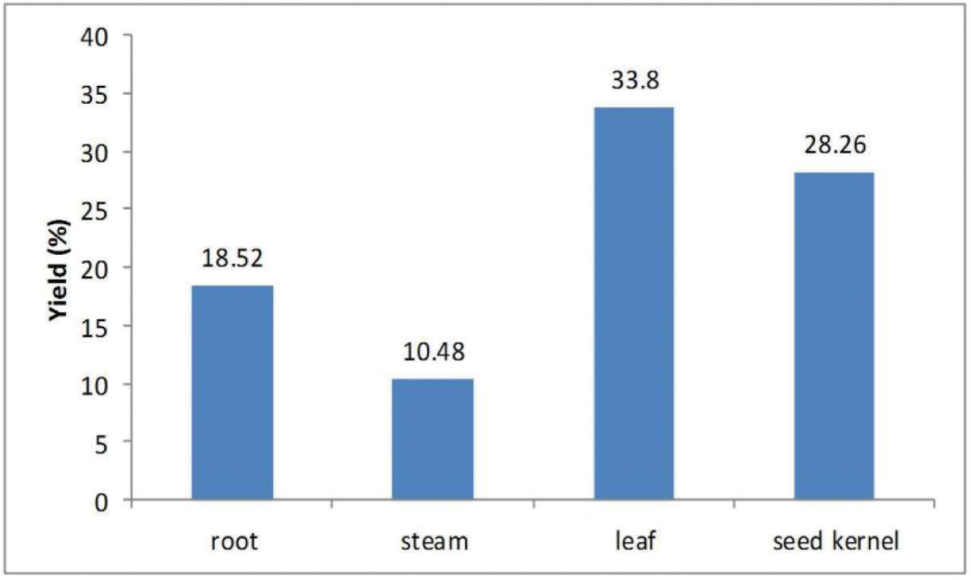 The ability of extract in scavenging DPPH radical are shown in Table 4. The leaf has the highest ability to scavenge free radicals than other parts.

Extraction was done using 70% ethanol as solvent. According to Jing et al,22 this solvent is preferred to extract phenolic compounds from plants. Reflux method was chosen as extraction method to optimize phenolic and flavonoid content. Temperature was maintained not exceeding 70°C to avoid any degradation of phenolic and flavonoid as targeted compound.23

Different parts of plant could have different phytochemical compound, which may contribute to different pharmacological effect of each part. Phytochemical screening showed that all of extracts from root, stem, leaf and seed kernel of C. bonduc contain flavonoid and saponin, and absent in alkaloid and quinone. Among other part, only leaf contained tannin, one of polyphenol that can donate hydrogen and act as antioxidant.15,24

Total flavonoid content was determined using aluminium chloride method. Aluminium chloride will form stable complex with carbonyl group at C4 and hydroxyls at C3 (flavonols) and C5 in flavonols and flavones. It could also form labile acid complexes with hydroxyls in the ortho position in B rings of flavonoids.25

Phytochemical screening of the extracts.

The total phenols contents in four different crude extracts were evaluated in the present study. The highest amount of phenolics compounds was present in leaf (146.64 mg of GAE/g of crude extract) and the lowest was in seed kernel extract (70.34 mg of GAE/g). Leaf also have highest total flavonoid content (31.05 ± 0.35 mgQE/g) while the lowest was in root (12.55 ± 0.08 mgQE/g).

The molecule DPPH is a free radical by the delocalisation of the spare electron over the molecule. The delocalization of electron rises to the deep violet colour. If a solution of DPPH is mixed with samples that can donate a hydrogen atom, DPPH will be converted into colourless purple. The amount of reduced DPPH was measured in absorbance at 517 nm.26 In present study, ascorbic acid as a well known potent antioxidant, was used as positive control for DPPH scavenging activity. Leaf part showed highest ability in DPPH scavenging activity compare to other plant part which measured by the lowest IC50 value, but it has lower antioxidant capacity compared to ascorbic acid. The phenolic content in the leaf may contribute to the antioxidative action by hydrogen donating ability. Antioxidant activity of leaf and seed kernel of C. bonduc in this study were found different from study in other country.27,28 The variation might be caused by different phytogeographic region and plant nutrition, which could modify the secondary metabolites of the plant29 and due to the different method of extraction and solvents polarities.

This study was supported by Universitas Indonesia via a grant “Hibah PITTA 2017”. 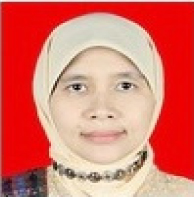 Elin Novia Sembiring: Is a magister student at the Faculty of Pharmacy, University of Indonesia. Her magister research focused on the phytochemical and antioxidant activity of Indonesian herbal medicines. 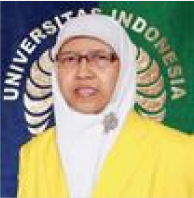 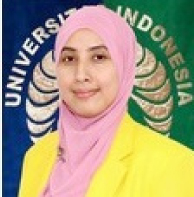 Rani Sauriasari: working as lecturer and researcher in Faculty of Pharmacy, University of Indonesia. Her doctor degree obtained from Public Health (Medical Faculty), Okayama University, Japan. Currently, she is positioned as Manager of Research and Community Engagement, Faculty of Pharmacy, University of Indonesia. Has experience in the area of Biochemistry, Analitycal Chemistry and Pharmacology, working mainly in: Medicinal plants and New Research Drugs.

[4] Conflicts of interest CONFLICT OF INTEREST No conflict of interest

Concentration of samples resulting in 50% inhibition