Stem bark showed presence of rhytidomes, groups of stone cells, resin ducts, uni and biseriate medulary rays, starch grains, prismaic crystals of calcium oxalate. Histochemical tests, behaviour of drug with different chemical reagents and fluorescense analysiss howed the presence of lignin, resin, oils and crystals which would prove to be a unique parameters for identification of the drug.

Findings of this study will be helpful for identification and authentication of stem bark.

Desmodium oojeinense (Roxb.) H.Ohashi, (Syn. Ougeinia oojeinensis (Roxb.) Hochr.)is a tree belonging to family Fabaceae. It is native of India and also found in Nepal. Bark is astringent, acrid, cooling, sadorrific, depurative, stypic and rejuvenating[1]. Bark is reported to posseses antiinflamatory[2], antispasmodic[3], hypoglycemic and hypolipidemic activity and useful in the management of diabetes[4-6]. It is used to treat diarrhoea, dysentery and used as fish poison and febrifuge[7-10]. It is also useful in anaemia, leucoderma, ulcer and biliousness[10]. Methanolic extract of bark contains alkaloids, terpenoids, flavonoids, glycosides, tannins, saponins, proteins and carbohydrates.[11]

Pharmacognostic and phyto chemical evaluation of bark has been reported[12] but the detailed study was needed to standardize the bark drug as per the standards laid down by Ayurvedic Pharmacopoeaia of India and guidelines provided by WHO for medicinal plants.

Stem bark and flowering twigs of D. oojeinense were collected from the plant growing in the campus of Abasaheb Garware, Art and Science College, Pune, Maharashtra, India.

2.2 Identification and authentication of plant material

Herbarium of the plant speciemen were prepared and deposited in the herbarium section of the RAIFR, Pune with voucher speciemen number 4526/2014[14].

Shade dried, stem bark pieces were made in to powder using grinding mill; passed through #60 sieve and kept in airtight container for further analysis.

Free hand transverse sections (TS) of bark were taken and stained with Safranin and Phloroglucinol, followed by Hydrochloric acid. Micro photographs were snapped with the help of Deno Capture 2.0 version 1.4.2.D, the versetile digital microscope[16].

Dried bark powder was used for the analysis of histochemical, physico-chemical aspects such as behaviour of powder, fluorescense analysis[17]. 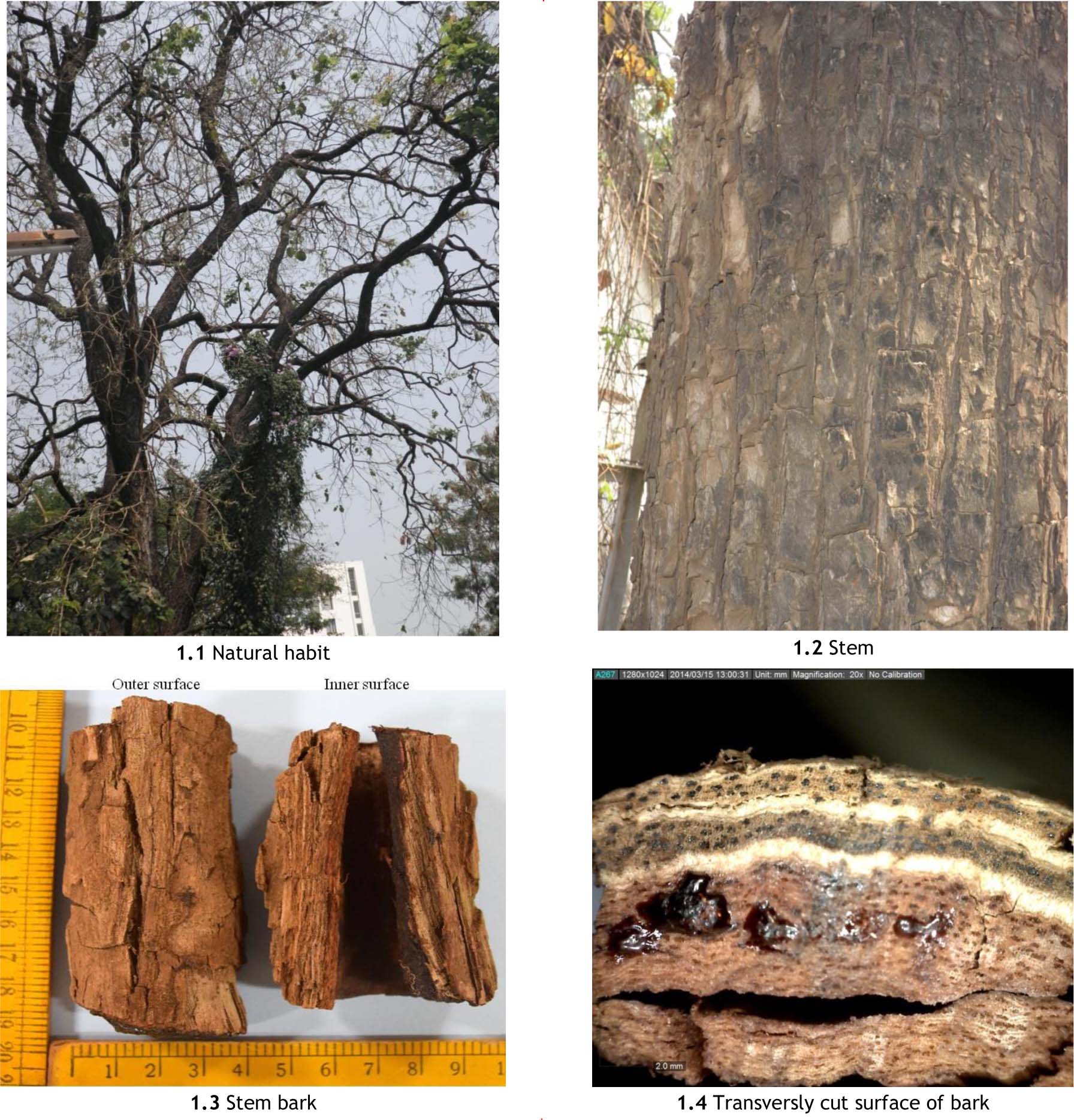 Mature pieces of bark are flat or slightly curved in shape, 5 to 6 cm in length, 2 to 2.5 cm in width and 4 to 8 mm in thickness. Outer surface of bark is powdery, slightly rough, and creamy to light brown in colour. There are small patches, oozing brown resin. Powdery layer alternating with rough surface transversely up to rhytidome; occasionally longitudinally cracked. Inner surface rough, yellowish brown, due to oozing of resin, splintery fractured (Figure 1).

Diagrammatically,transverse section of bark showed a rhytidome outside which occupies half area of entire bark with scattered groups of fibres, resin ducts and biseriate medullary rays. Rhytidome alternating with lignified irregular cells of powdery layer followed by cork. The innermost layer is phloem traverse with groups of fibres, resin duct, biseriate medullary rays and patches of compressed phloem (Figure 2.1).

Powder under microscope showed different anatomical characters. Details of characters recorded are given in Figure 2.3 and 4.

Powder drug was treated with different chemical reagents and observed in day light and ultra-violet light and inferences was recorded in Table 2. Drug colour changed after reacting with chemical and observed under 254 and 366 nm which is would be characteristics for particular drug and would be beneficial to identify the bark of D. oojeinense. 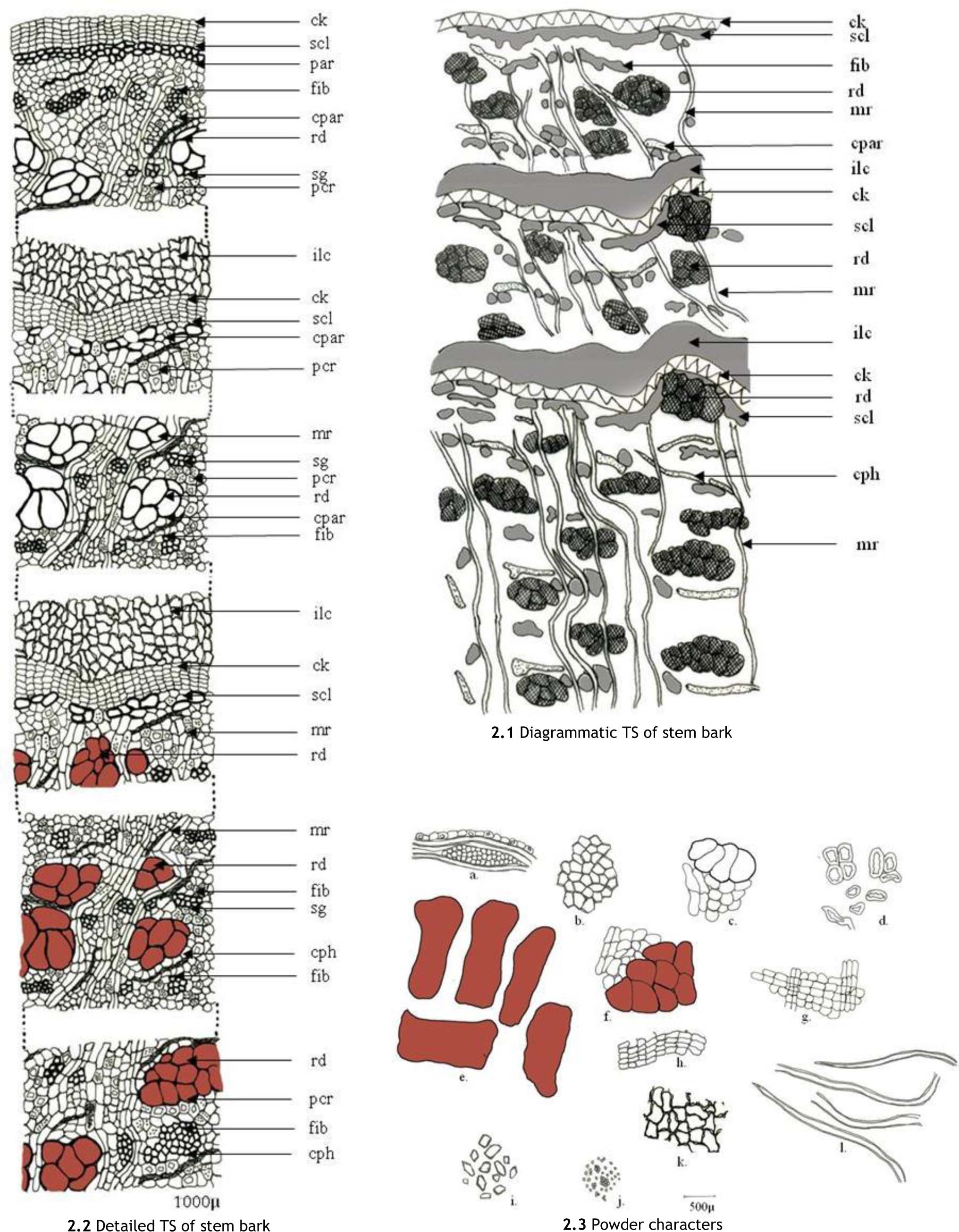 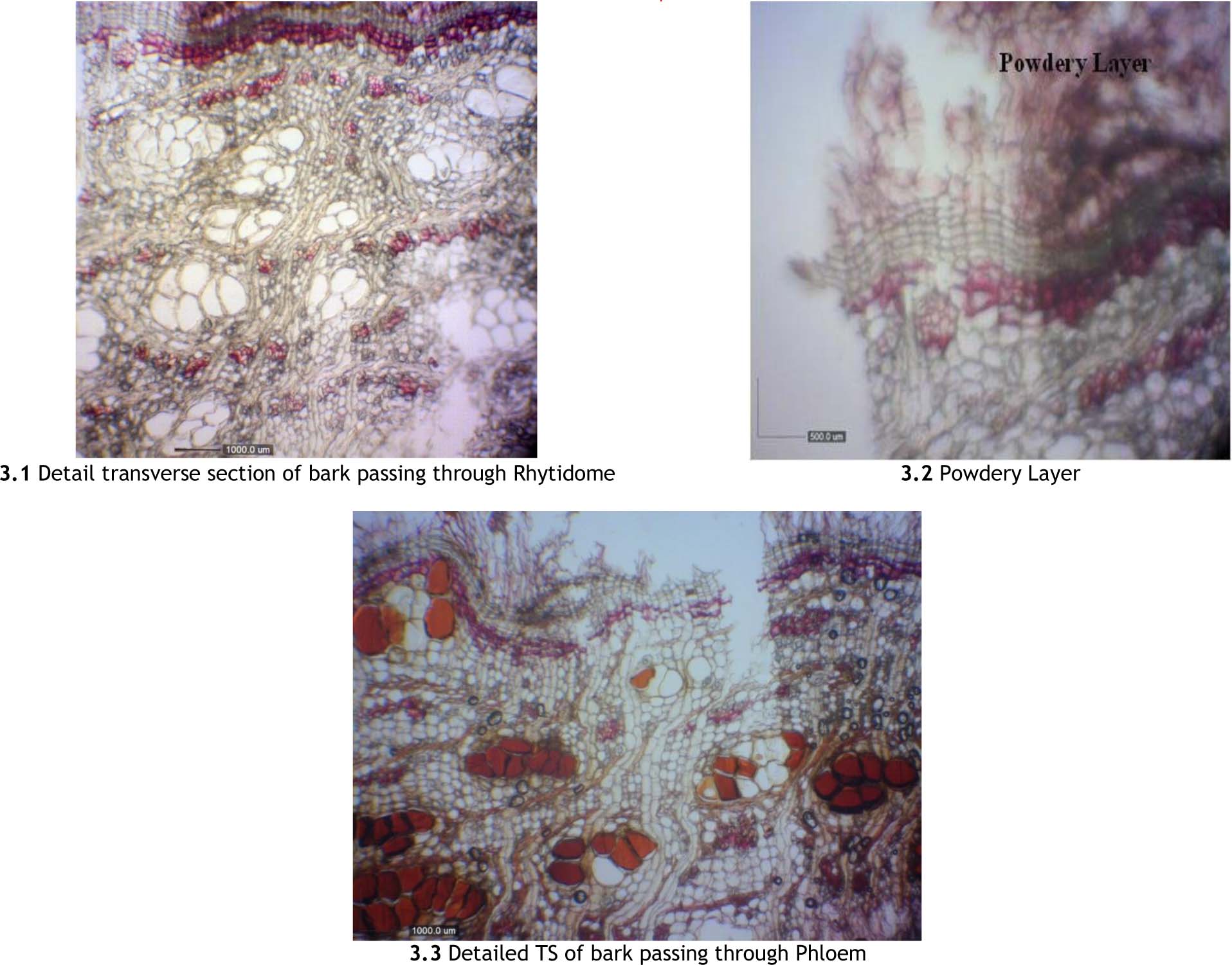 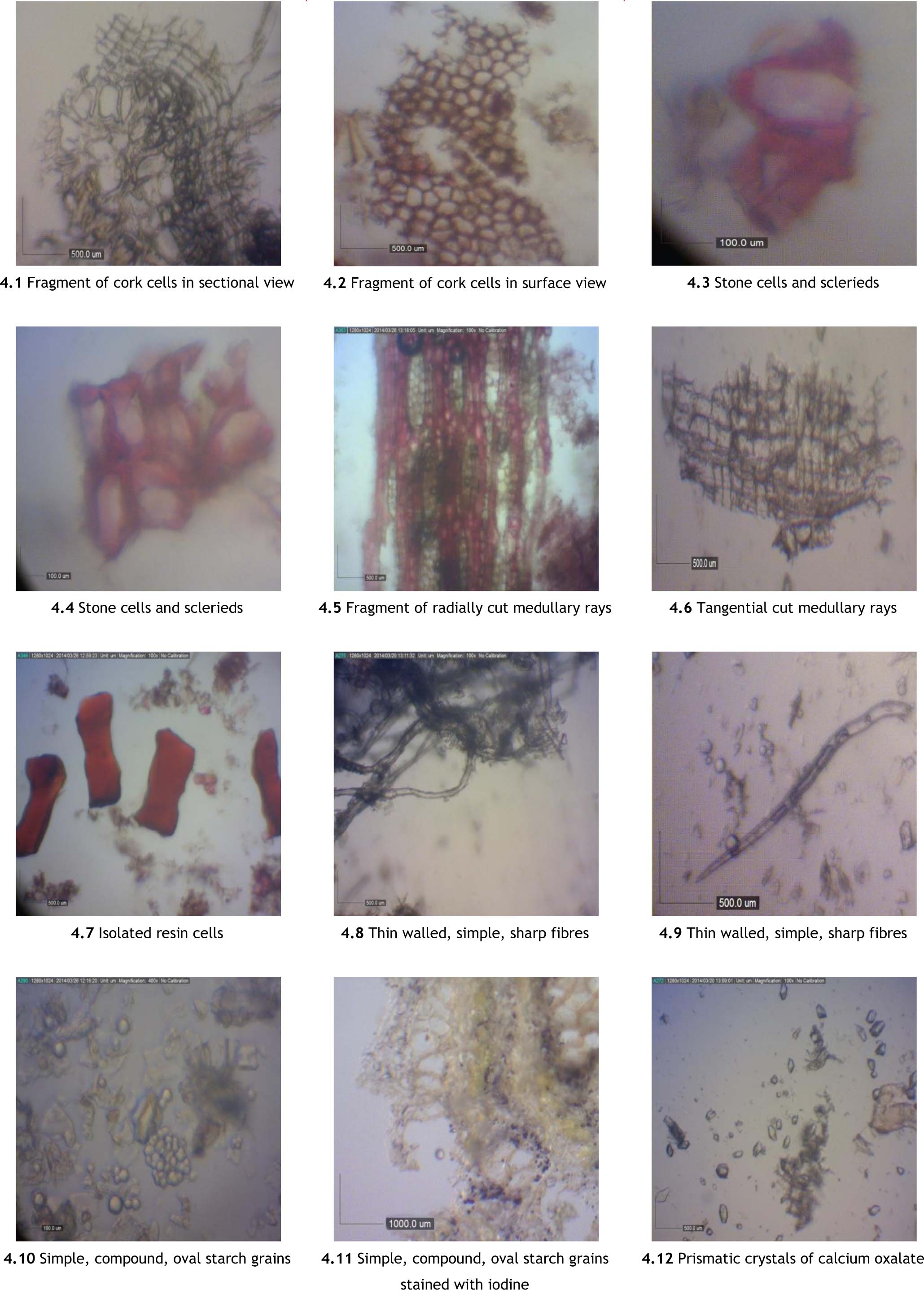 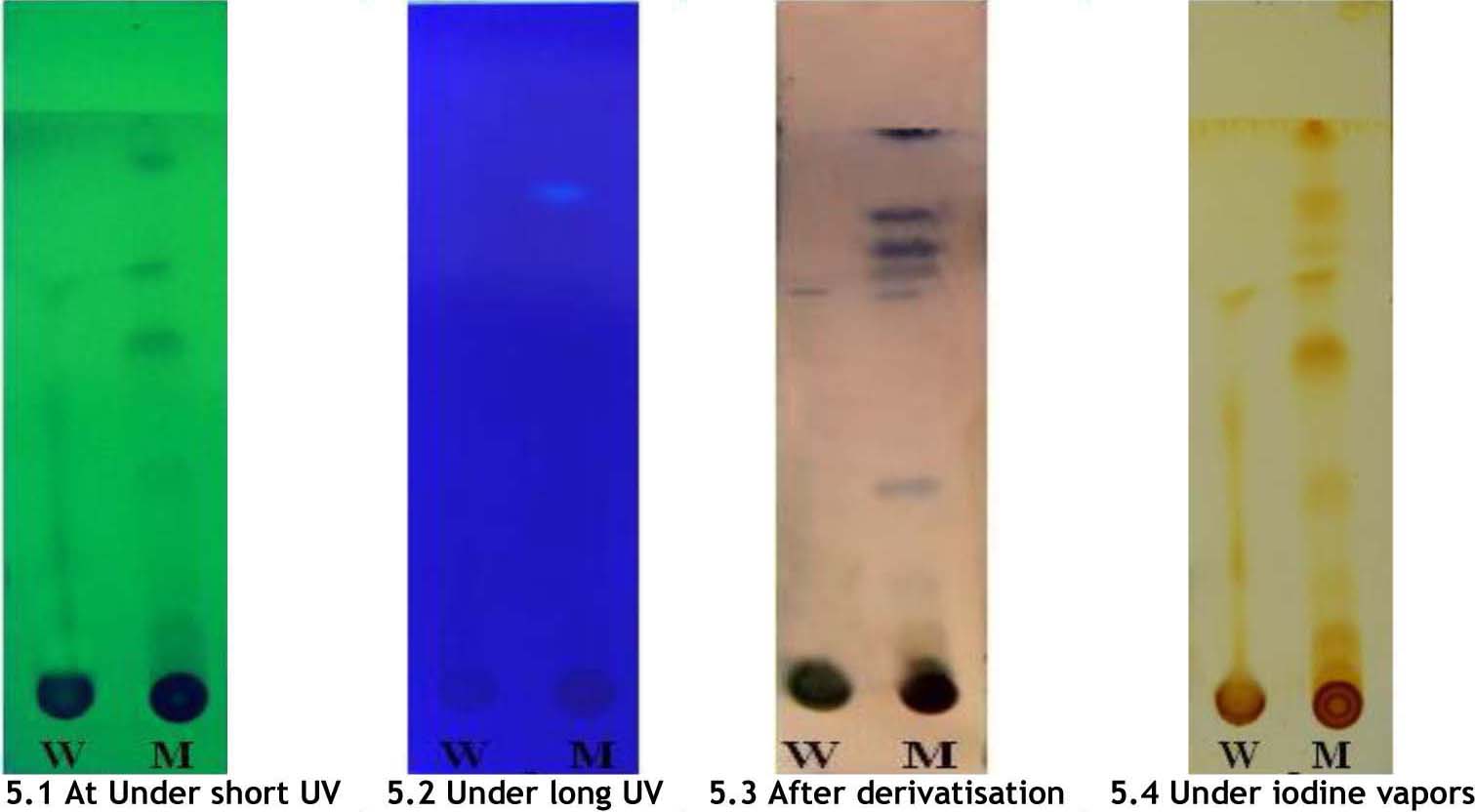 The results of this studies would be useful for identification, authentication and standardization of stem bark of Desmodium oojeinense (Roxb.) H. ohashi and also to detect the spurious adulteration in the genuine drug. 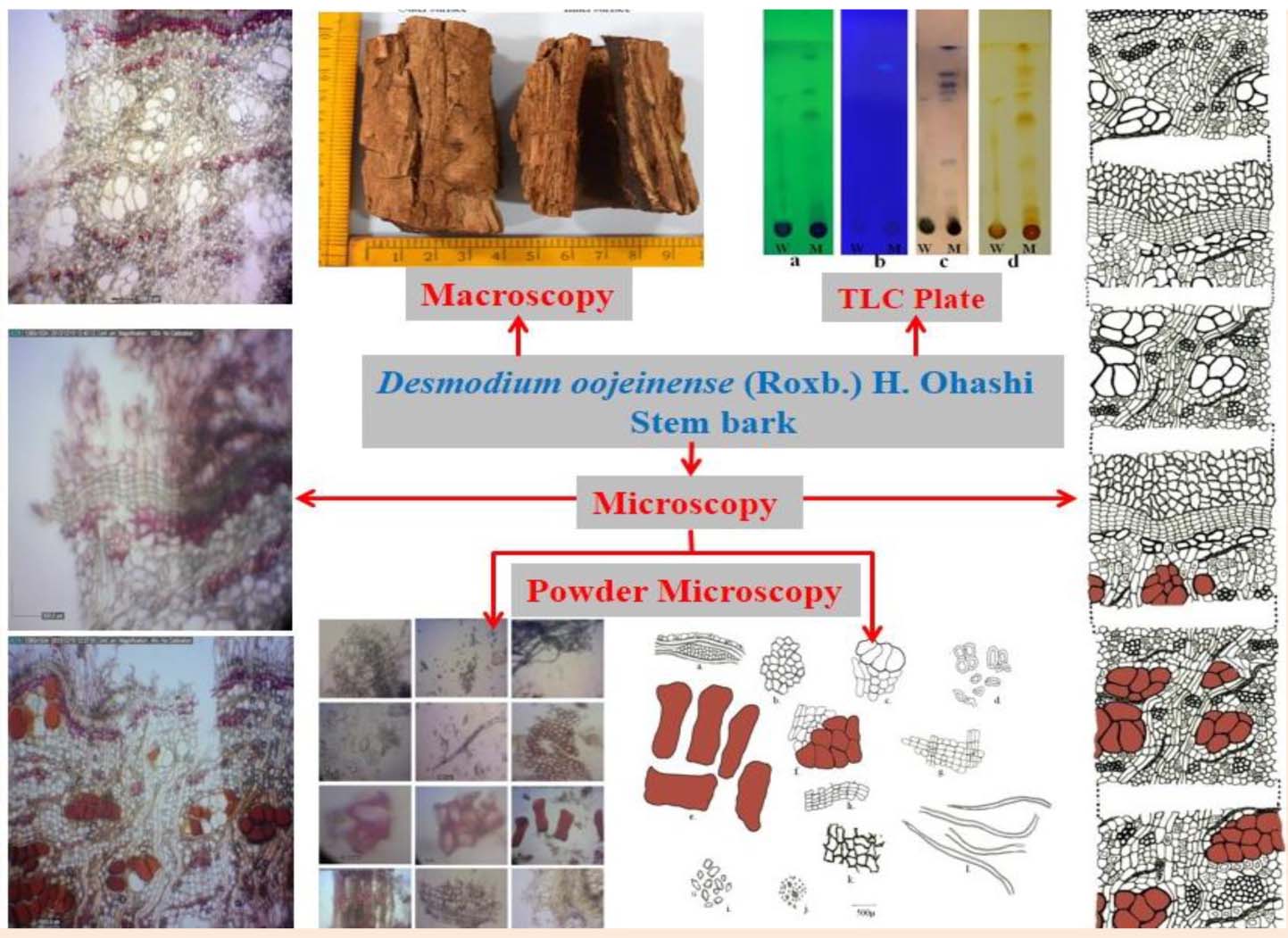 Authors are thankful to Prof. Sharyu Sathe, Head of Department of Botany, Abasaheb Garware Arts and Science College, Pune for allowing to use genuine stem bark from their Botanical Garden.

Mrs. Rekha B Nirawane performed all experimental work in pharmacognosy, phytochemical parameter, Camera lucida drawings, TLC and any other laboratory work. Dr Arun M Gurav contributed to the planning and execution of research work, literature survey for article, drafting and finalization of article as per the format. Dr. Gajendra Rao contributed to vetting and suggestions on drafting. Dr. Anupam K Mangal and Dr. N Shrikanth edited the manuscript contents to acceptable form.