Sida rhombifolia belonging to family Malvaceae is widely used in Ayurvedic practice for the treatment of infectious diseases, fever, diarrhea and diuretic. Several bioactive compounds are reported from the plant having medicinal activities.

Standardization has been done to ensure the quality and purity of authentic specimen, Phytochemical test was carried out to explore its phyto-constituents. HPTLC fingerprinting profile was also been carried out. Further the ethanolic and chloroform extract of aerial parts was screened for antibacterial and antifungal activity by Agar well diffusion method.

The chloroform extract showed significant antibacterial and antifungal activity when compared to the ethanolic extract. Preliminary phytochemical screening revealed the presence of alkaloids, carbohydrates, tannin and coumarins. Distinct spots are also observed in the HPTLC prints.

The present investigation provides useful information on antimicrobial activity of chloroform extract of Sida rhombifolia in treatment of various bacterial and fungal infections.

Sida rhombifolia is a perennial or sometimes annual plant in the family Malvaceae. It is a cosmopolitan species, particularly in warmer regions. It is a small shrub or woody herbaceous plant with upright stems. It is used in stomach disorders like stomach pain, indigestion, flatulence, gastritis as emollient and demulcent. It is also found to have hepatoprotective and restorative activity[1,2]. Various biological activity studies have been reported from different morphological parts of S. rhombifolia. Aqueous extract of leaves was administered to hyperbilirubinemic rats, and showed potential of this plant as source new drugs for hyperbilirubinemic subjects[3]. In another report, it has been discussed that methanolic extract of the aerial part showed anti-inflammatory activity in animal model study[4]. Ethyl acetate and aqueous extracts of Sida rhombifolia was also reported to show marked antibacterial activity and significant antifungal activity[5]. The in vitro studies on antibacterial efficacy of different extracts of fruit also showed remarkable activity[6]. The present work is on phytochemical, antibacterial and antifungal activity of chloroform and ethanol extract of aerial parts of S. rhombifolia which can be used instead of root for sustainable supply as per demand.

2.1 Collection of plant material and extraction

The aerial parts (stem and leaves) was collected from Kabbinale, Hebri in Udupi district of Karnataka, it was authenticated by referring to flora of Udupi[7].The plant material was dried and powdered and used for preparation of extract. About 10 gm of the powder was loaded into a thimble of Soxhlet extractor and successively extracted with chloroform and ethanol.

One gram of the powdered plant material which was previously dried and powdered was soaked in 10 ml ethanol for 24 hrs, filtered and filtrate was made up to 10 ml and used for sample preparation.

3, 6 and 9μl of the sample was applied on aluminium plate pre-coated with silica gel 60 F254 of 0.2 mm thickness (Merck, Germany) using CAMAG LINOMAT 5 applicator[10]. The plate was developed in CAMAG glass twin trough chamber previously saturated with mobile phase toluene: ethyl acetate (6.0: 1.0). The plate was derivatized using vanillin- sulphuric acid (VS), and heated at 105 °C till the spots appeared[11,12]. The developed plates were visualized in CAMAG visualizing chamber and scanned in CAMAG SCANNER 4 under 254 nm, 366 nm and 540 nm (pre-derivatisation) with the help of CAMAG WinCATS software. Rf values and densitograms were recorded.

Ethanolic and chloroform extract of Sida rhombifolia (500 mg) was dissolved in 5 ml of dimethyl sulphoxide (DMSO) and the stock solution was further diluted to required concentration.

Work place was sterilized in laminar air flow using 70% ethanol and switch on the UV for 20 minutes. Inoculated one loop of Haemophilus influenzae from the culture into 10 ml of broth and mixed well. 15ml of the blood agar medium was poured uniformly over the sterile petri-dishes. 1 ml of broth containing the organism was added uniformly over petridish, mixed well and the media was allowed to solidify. Five equidistant wells were made on the plate. 100 µl of extract, standard (Ampicillin) and control was added to the wells. Test was conducted for different concentration of extract (1-100 mg/ml) separately. All the petridish were incubated at 37°C for 24 hrs. After the incubation period, the zone of inhibition was measured. Experiments were carried out in duplicate[13].

Ethanolic and chloroform extract of S. rhombifolia (500 mg) was dissolved in 5 ml of dimethyl sulphoxide (DMSO) and the stock solution was further diluted to required concentration.

24g of potato dextrose broth was dissolved in 1000ml distilled water and 15g of agar was added to it. Media was autoclaved at 121°C for 20 minutes.

Work place was sterilized in laminar air flow using 70% ethanol and UV was switched on for 20 minutes. One loop of Aspergillus niger was inoculated from culture into 10ml of broth and mixed well. 15ml of the Potato dextrose agar medium was poured uniformly over the sterile petridish and 1ml of broth containing the fungus was added uniformly over petridish. It was mixed well and the media was allowed to solidify. Five equidistant wells were made on the plate, 100µl of the extract, standard (Fluconazole) and control were added to the wells. Test were conducted for different concentration of extract (1–100mg/ml) separately. All the petridishes were incubated at 25°C for 5 days. After the incubation period, the zone of inhibition was measured. Experiments were carried out in duplicate[13].

Physicochemical test performed as per WHO guidelines parameters are presented in (Table 1).

Preliminary phytochemical screening revealed the presence of alkaloids, carbohydrates, tannin and coumarins. The phytochemical constituents present in the extract can be held responsible for different medicinal activities of the plant (Table 2). 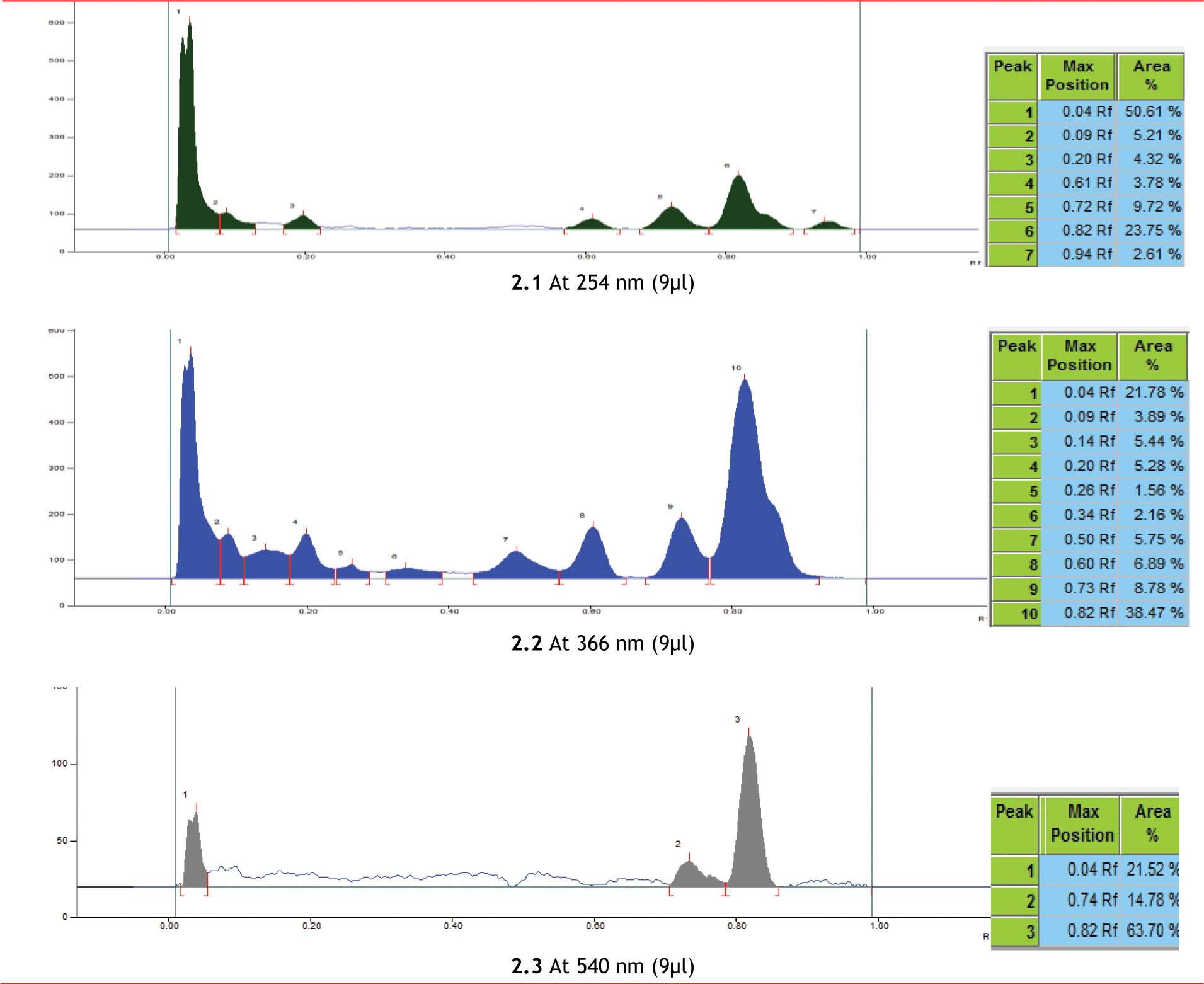 * no zone of inhibition for control 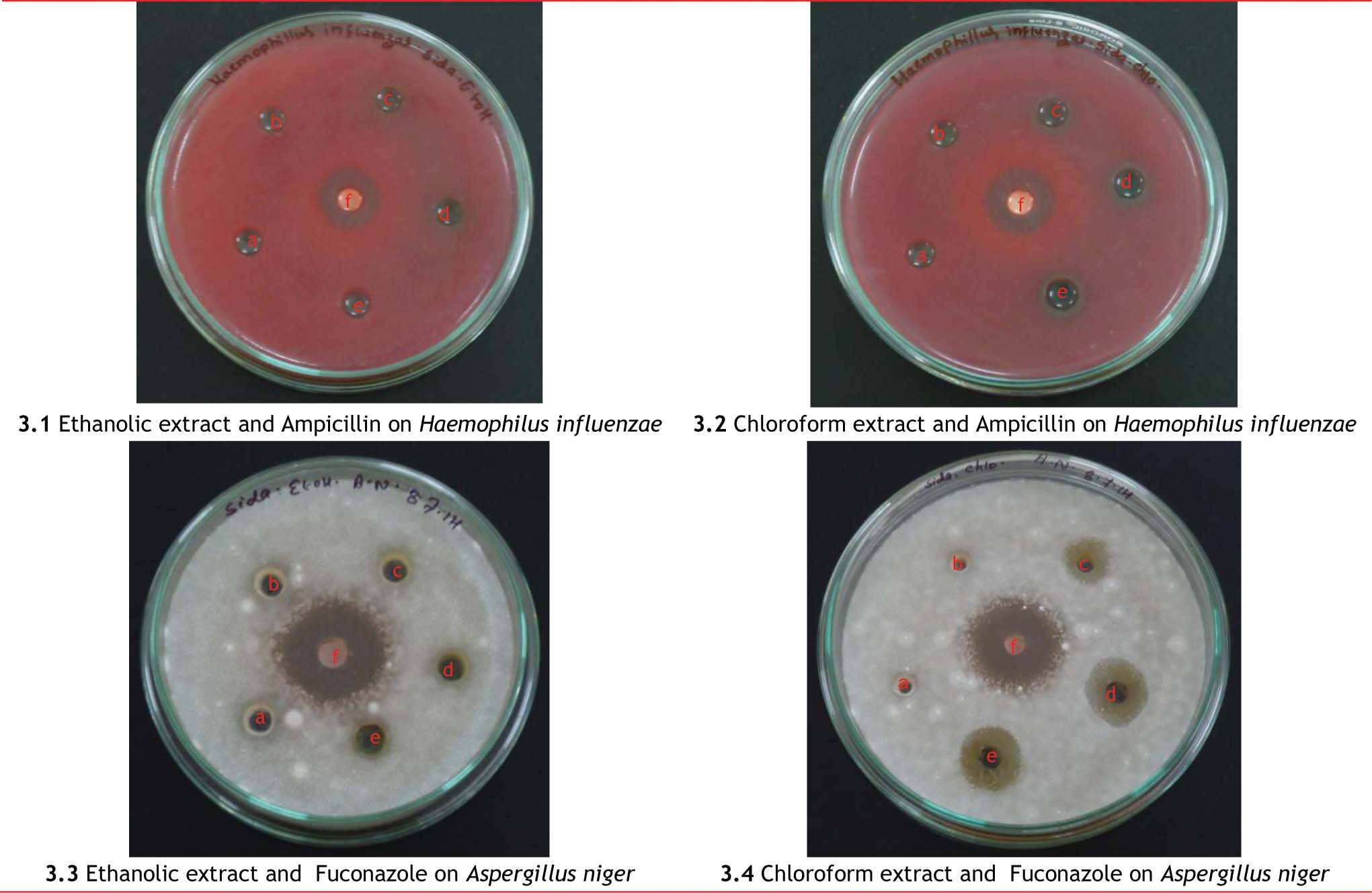 The antimicrobial activity of the ethanolic and chloroform extracts of Sida rhombifolia were studied in different concentrations (1, 10, 50, and 100μg/ml) against pathogenic bacterial strain (Haemophilus influenzae) and a fungal strain (Aspergillus niger). These strains have been selected on the basis of its application purpose for further formulation study.

Aspergillus niger has been associated with otomycosis[15], cutaneous infections[16] and pulmonary disease. There were reports of A. niger causing pneumonia. In some case A. niger pulmonary infections were fatal.

There was no antibacterial as well as antifungal activity for ethanolic extract of Sida rhombifolia where as it was fairly significant in chloroform extract. The present investigation provides useful information on antimicrobial activity of chloroform extract of Sida rhombifolia aerial parts in treatment of various bacterial and fungal infections. As aerial parts of Sida spp may be used in place of root alone as it goes waste while harvesting of roots. As industries are already using whole plant instead of roots of these herbs the study provides important insight on standards for aerial parts of Sida rhombifoila. 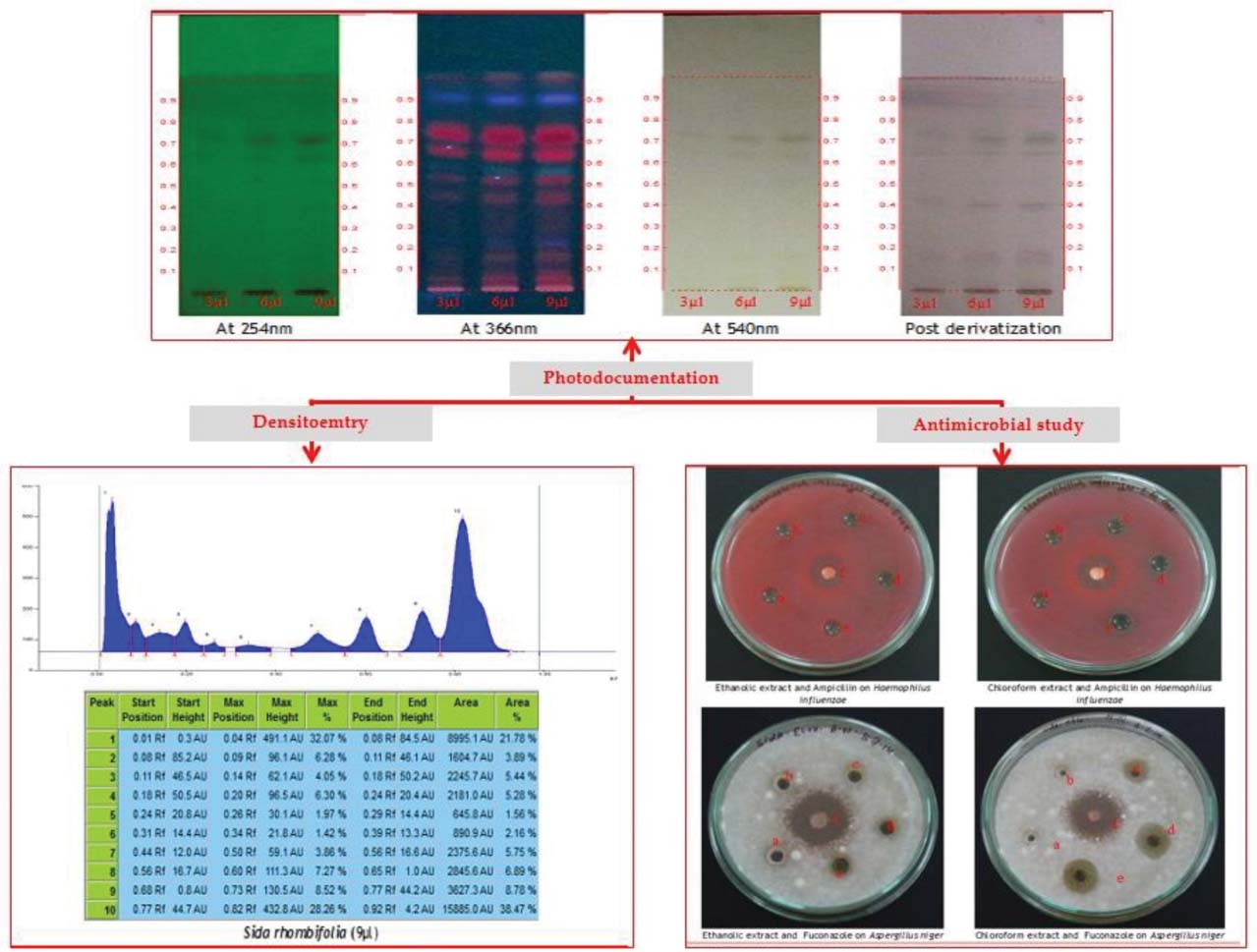 [5] Contributed by CONTRIBUTORS Miss. Ananya Rai and Mrs. Suchitra performed all experimental work in phytochemical parameter, TLC and any other laboratory work. Dr Vishwanatha contributed to the antimicrobial study. Dr KN Sunil Kumar and Dr. B Ravishankar contributed to planning and execution of research work, literature survey for article, drafting and finalization of article as per the format.