Successive extractions of various part of P.emblica were performed by maceration using differrent polarity solvent n-hexane, ethyl acetate and ethanol. The antioxidant activity of each extracts was performed using DPPH (2.2-Diphenyl-1-Picrylhydrazil) method. The determination of total flavonoids, phenolics and carotenoids were performed by UV-Spectrophotometry. Antioxidant activity was demonstrated by IC50 and its correlation to total flavonoids, phenolics and carotenoids using the Pearson’s method.

Phyllanthus emblica known as Malacca is a very potent plant as an antioxidant.1 Malacca is a traditional medicinal plant that has long been used.2 Research on the biological activity of P. emblica has been widely performed, especially in in vitro.3 P. emblica plants show a variety of biological activities, ie as anti-inflammatory, antipyretic, diuretic, and laxative,4 anticancer,5 antioxidants, antidiabetes.6,7

Biological activity and chemical compound in a plant can influenced by the physiological processes in a plant, environmental conditions.5 such as sunlight condition, air pressure and temperature.10 Beside that, the maturity part of plant could be a factor to differences type and quantity secondary metabolites.11,12

Antioxidants are one of the components needed in the body, to counteract free radicals. Excessive free radicals in the human body can cause several diseases, such as diabetes, heart disease and inflammation.13 The antioxidant compounds obtained from plants may be phenolic, carotenoid.14,15 compounds, and flavonoids.16 This study was conduct the antioxidant activity of P. emblica extract from West Java, Indonesia, and its correlation of chemical compound in P. emblica extract.

Simplicia of fruit, leaf and stem bark of P. emblica were authenticated at Herbarium Bandungense, Faculty of Biology, Universitas Padjadjaran, Indonesia. All simplicia were sorted, washed, dried with oven at 40°C, and ground into powder.

Phytochemical screening performed against all extract (BN, BE, BO, DN, DE, DO, KN, KE, and KO). FeCl3 10% used for phenolic compound, amyl alcohol for flavonoid compound, gelatin for tannin, dragendorf and mayer for alkaoid, KOH 5% for quinon, vanillin 10% in H2SO4 for monoterpen and seskuiterpen, Lieberman-Buchard for steroid and triterpenoid.17 Saponins showed by a constant foam ± 10 min in water extracts

The antioxidant activity were performed using DPPH (2.2-Diphenyl-1-Picrylhydrazil) method, adopted from Blois (1958)18 with modification. Each sample was made several concentrations in P.a methanol, then into each concentration of sample solution was added DPPH 50 μg/ml solution in ethanol p.a (Volume 1: 1). After that, the mixture was incubated for 30 min in a darkened room. Then measured the absorbance of each mixture using a UV spectrophotometry. Measurements carried out three repetitions. Methanol P.a was used as a blank, DPPH 50 ug/ml solution as control, and ascorbic acid solution as a positive control. IC50 DPPH was obtained from the calibration curve of the antioxidant activity of the sample on some sample concentrations in range 10 ppm to 70 ppm.

Statistical analysis using ANOVA with a statistical significance level set at p < 0.05 and post-hoc LSD procedure was done with SPSS 16 for Windows. Correlation between the total phenolic, flavonoid, carotenoid content and antioxidant acivity whiches showed with IC50 were conducted using the Pearson’s method.16 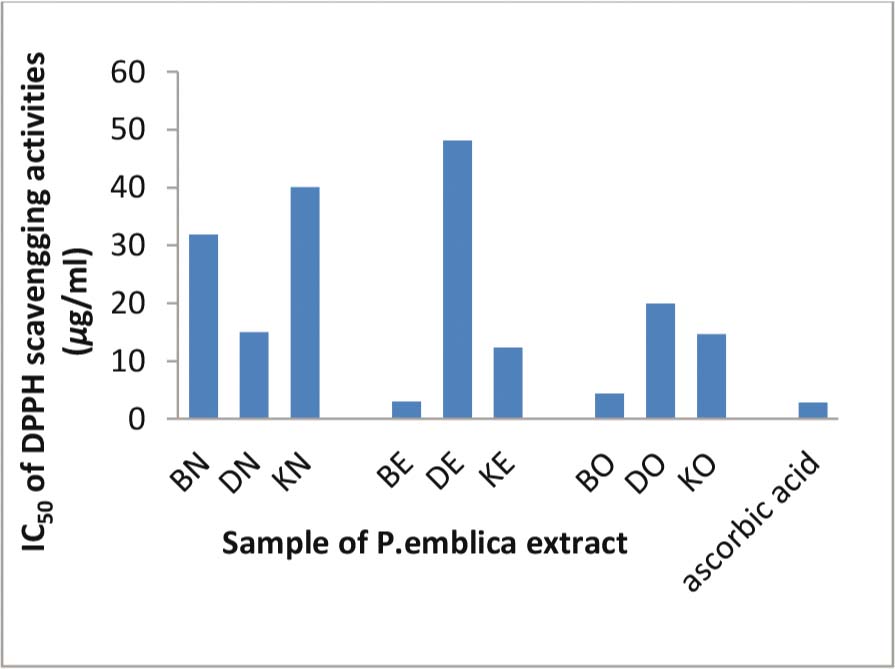 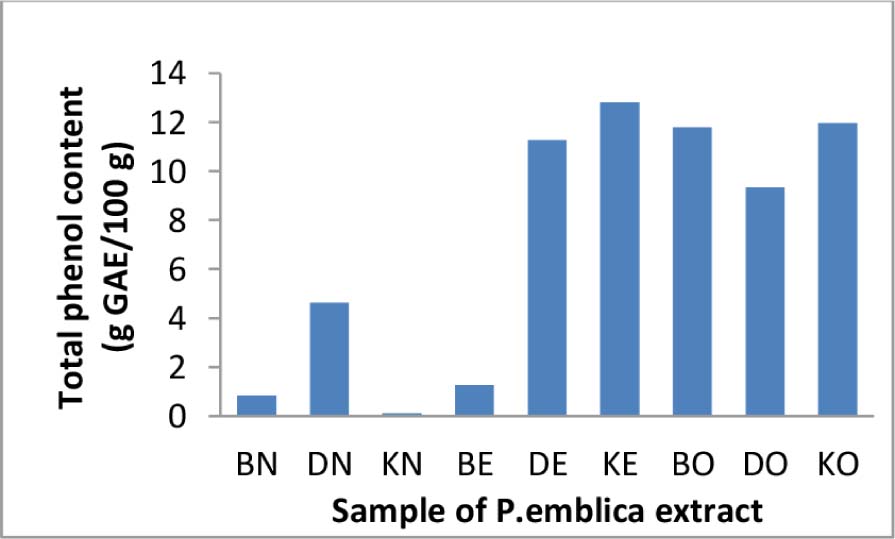 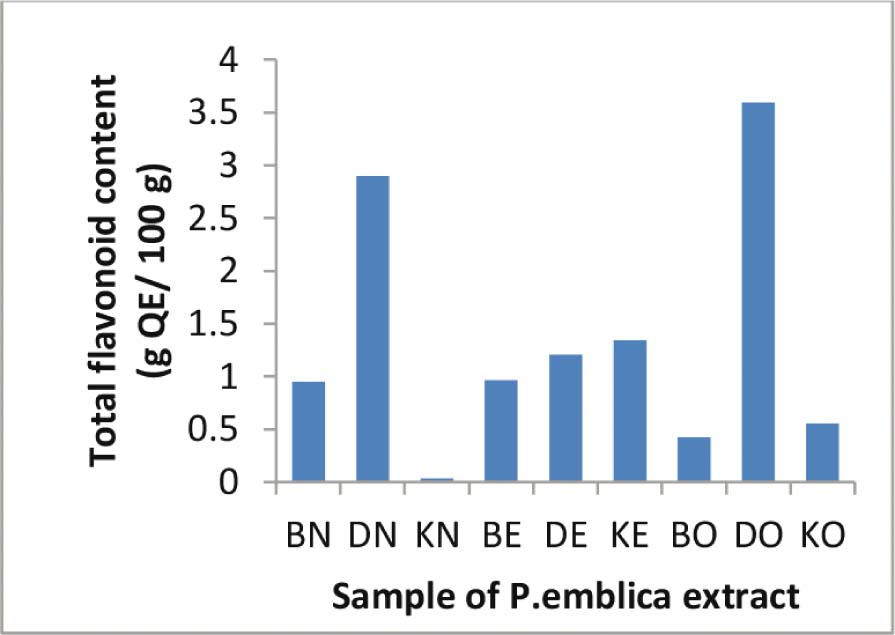 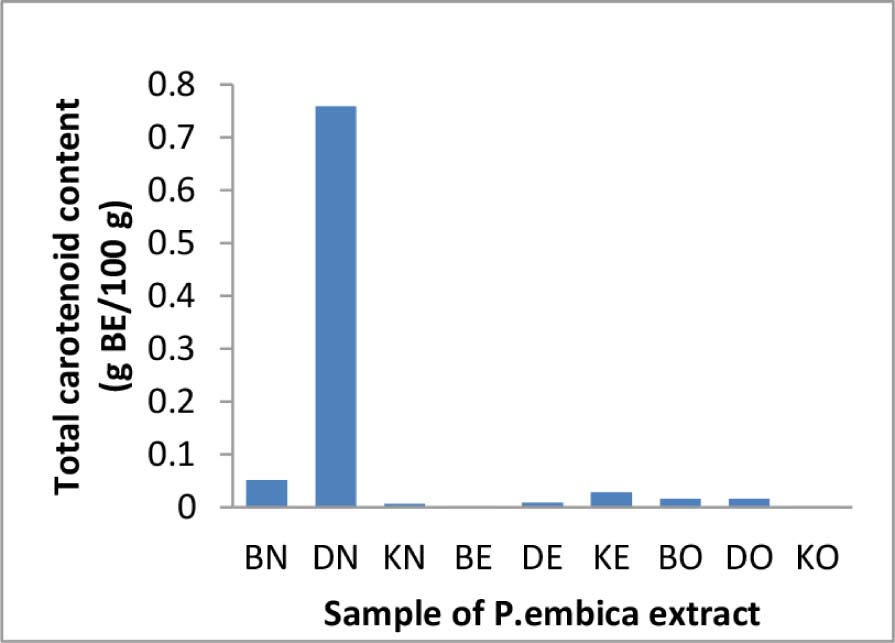 Pearson’s correlation of total phenol, flavonoid and carotenoid content with extract of P.emblica.

Determination correlation between total carotenoid content to IC50 of DPPH scavengging activities have showed carotenoid compound were not been mayor group as antioxidant activity contributor compound. Leaf extract of P.emblica had the highest as contributor antoxidant compound than stem bark extract and fruit extract. Pearson correlation of leaf extract as r = -0.621; p > 0.05. Carotenoid compound as beta-carotene and α-tocopherol was the high suspected to antioxidant potency.35,56 β-carotene was efective as antioxidant compound in human body.35,36 Much of double bond conjugated in β-carotene, suspected to antoxidant activity.35,37,38 Besides that, zeaxanthin, astaxanthin and astxanthin-β-glucoside35,36 can suspected to antioxidant activity. The previous study, so far have not been reported about correlation total carotenoid content with IC50 value of DPPH scavengging activities sed Pearson’s correlation. Becaused that, this result not yet compared to previous study. 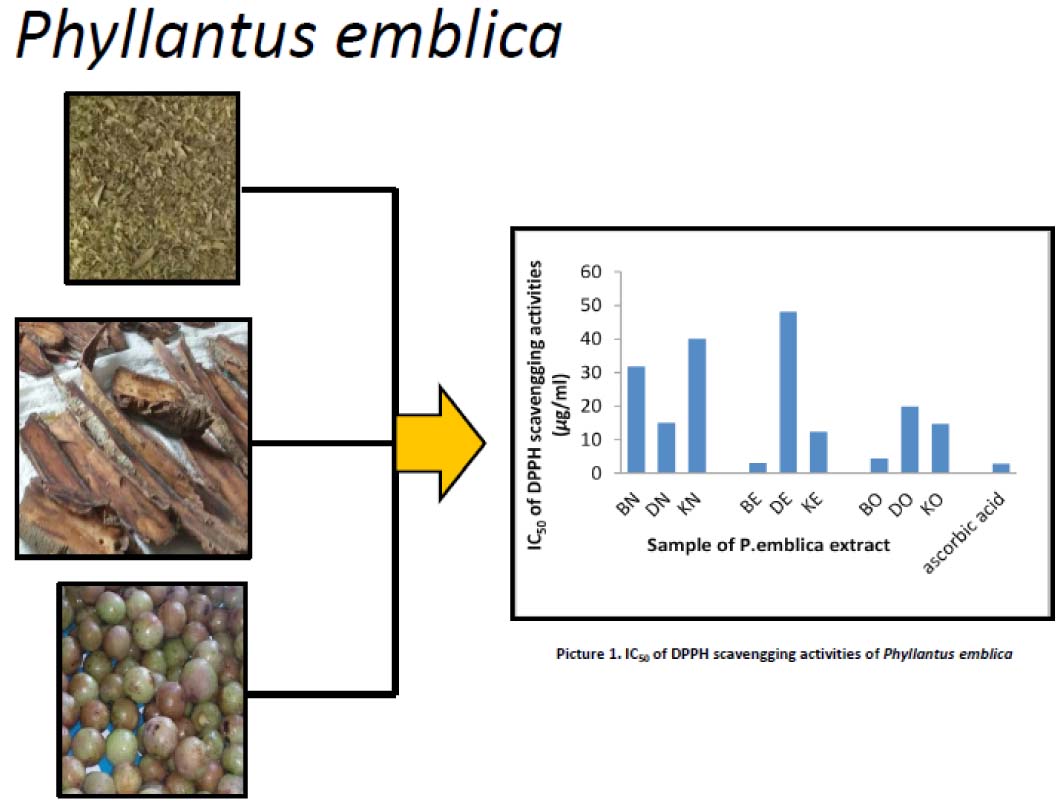 We would like to thank Sekolah Tinggi Farmasi Indonesia (Yayasan Hazanah) for funding and supporting this research. 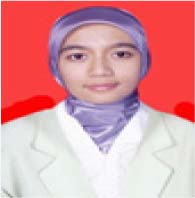 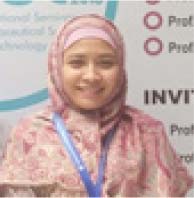 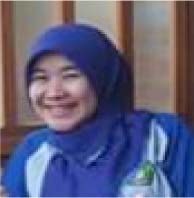 Yessi Febriani: Is a lecturer in Sekolah Tinggi Farmasi Indonesia (Indonesian School of Pharmacy), Indonesia, in Pharmaceutical Biology Department, in the area concentration Phytochemistry and Pharmacognosy. 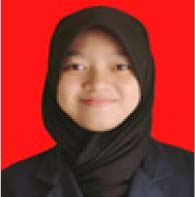 [1] Conflicts of interest CONFLICT OF INTEREST The author declare that there is no conflict of interest, financial or otherwise regarding the publication of this paper.