Abutilon indicum and Mimosa pudica were a folklore recipe in Northeastern of Thailand. The recipe was reported that claim to diabetic treatment.

The study was proved to diabetic treatment and improvement of diabetic stage and blood biochemical parameters. In addition, the experiment was confirmed to folklore traditional use.

Diabetes mellitus (DM) is a group of chronic metabolic disease characterized by hyperglycemia resulting from defects in insulin secretion, often combined with insulin action, or both. The chronic hyperglycemia of diabetes is associated with long-term damage, dysfunction and failure of various organs and systems.1 Diabetes requires continuous medical care and patient self-management education in order to prevent acute complications and to reduce the risk of long-term complications.2 Oral anti-diabetic agents are not only expensive, but also have undesirable side effects or contraindications.3 Diabetic patients often seek complementary therapy such as herbal medicines. In Thailand, several herbal medicines have been documented support as diabetic treatment.4 Many Thai medicinal plants have been used as the traditional medicines for management of diabetes. A Thai folklore recipe consist with M. pudica (MAI-YA-LAP) and A. indicum (KHOB-FUN-SRI) have also been reported as being effective in diabetic treatment.

M. pudica or the sensitive plant is a medicinal plant belonging to the family Fabaceae. The plant was found to grow in undisturbed shady areas, under trees or shrubs.5 The most important biologically active constituents of this plants are alkaloids, steroids, tannins, flavonoids, glycosides and saponins compounds.6 The wide range of pharmacological activities of this plant have been reported including wound healing,7,8 analgesic, anti-inflammatory,9 anticonvulsant,10 anti-diarrhea,6,11 anti-oxidant,5,9,12,13 hepatoprotective,13,14 hypolipidemic,15,16 diuretic property,17 hypoglycemic5,18–20 and hyperglycemia activities.21

A. indicum Sweet is belonging to the family Malvaceae. The plants is an erect, woody, shrubby plant, widely distributed in the tropical countries and has a long medical history of being used as an anti-diabetic remedy.22 The components contained the natural substances such as amino acids, aliphatic compounds, sugars, polyphenols, flavonoids, alkaloids and glycosides.23 The plant is also reported to possess analgesic,24 hypoglycemic,25–29 hepatoprotective30 and antibacterial activity.31 With respect to its traditional use in Thai traditional recipe, A. indicum and M. pudica should contain an active ingredient against diabetes and was believed to reduce some symptoms of diabetic complications.32

However, any signs or symptoms on diabetic treatment has not yet been demonstrated. Therefore, the purposes of this study were designed to determination of hypoglycemic effect and blood biochemical parameters using an different doses of a Thai folklore recipe that consist both whole plants of A. indicum and M. pudica in diabetic rats.

The fresh of whole plants (roots, stems, leaves, flowers and fruits) were harvested from Kalasin Province, Northeastern of Thailand. It was deposited at the Faculty of Medicine, Mahasarakham University, Thailand (code :: M. Pudica as MSU.MED-MP0001/AK ; A. Indicum as MED-AI0001/AK). The fresh plants were dried at 50°C for 48 hr in a hot air oven then powdered.

The aqueous extracts (AMA) were prepared by boiling dried plant powder from A. indicum and M. pudica (1:1 w/w) in distilled water (1:10 w/v) at 100 °C for 30 min for 3 times. The hydro-ethanolic (AMHE) and ethanolic (AME) extracts were prepared by macerating dried plant powder in 50% ethanol and 80% ethanol (1:5 w/v) for 7 days. The residue powder was excluded by using the filter papers. The extract was dried using a rotary evaporator (Heidolph Laborota 4000, Germany) followed by a freeze dryer (Christ Alpha 14, Germany) to get obtain dark brown extracts. The extracts were kept in the fridge at 4°C until be used.

Healthy adult male albino Wistar rats weighing between 150-200 g purchasing from the National Laboratory Animal Centre, Mahidol University, Thailand were used in this study. They were acclimatized in an air conditioned room at 23±2 °C, 12 h light/12 h dark cycle (350-400 Lux) and relative humidity of 50-55%, and given with a standard chow and watered ad libitum for 7 days prior to the commencing experiment. The rats were maintained in accordance with the guidelines of the Committee Care and Use of Laboratory Animal Resource, National Research Council Thailand and approved in accordance with the advice of the Institutional Animal Care and Use Committee, Mahasarakham University (IACUC-MSU), Thailand (License No. 0005/2017).

The animals were injected intra-peritoneally with a single dose of 65 mg/kg b.w. STZ (Sigma Chemicals, St. Louis, MO) dissolved freshly in cold 20 mM citrate buffer (pH 4.5).33After injection, they were provided with 2% sucrose solution for 48 h to alleviate the discomfort after initiating the hypoglycemic phase. Three days after injection, the rats were examined for FBG levels to confirm their diabetic stage. The rats showing FBG levels greater than 126 mg/dL were used in the experiments.34

The rats were fasted overnight and then the blood samples were collected from the tail vein of the rats. FBG was measured weekly for 8 weeks with Glucometer (Accu-chek Performa, Roche, Germany).

The results were expressed as mean±standard error of mean (SEM). Statistical analysis was carried out using One-Way ANOVA followed by Duncan’s new multiple range test. The criterion for statistical significance was at a p-value less than 0.05.

Table 1 shows the effect of various doses of AMA, AMHE and AME from Thai folklore recipe on percentage decreasing of FBG levels in rats. AME at the dose of 125 mg/kg b.w. showed significant highest percentage reduction of FBG levels in diabetic rats especially at the week 5, 7 and 8 which was greater than antidiabetic drug, glibenclamide and diabetic control groups. While, AMHE at the dose of 250 mg/kg b.w. produced a significant effect in lowering FPG which was showed at week 2 (12.22%) and 4 (9.31%) respectively. Pleasingly, at the week 4, AMA at the dose 500 mg/kg b.w. and AME at the dose 125 mg/kg b.w were significant decreasing percentage of FBG higher than normal control, diabetic control and glibenclamide.

The results show the mean ± SEM.

Effect of Thai folklore recipe on Blood biochemistry in rats.

Table 3 shows the effect of various doses of AMA, AMHE and AME from Thai folklore recipe on lipid profiles (TC, TG, HDL and LDL). All doses of the extracts were more potent significantly increasing HDL, decreasing LDL different from diabetic rats. TG in rats administered with all of the extracts exclude AME 250 and 500 mg/kg bw showed significantly (p<0.05) lower than the diabetic group which was almost equal to glibenclamide. 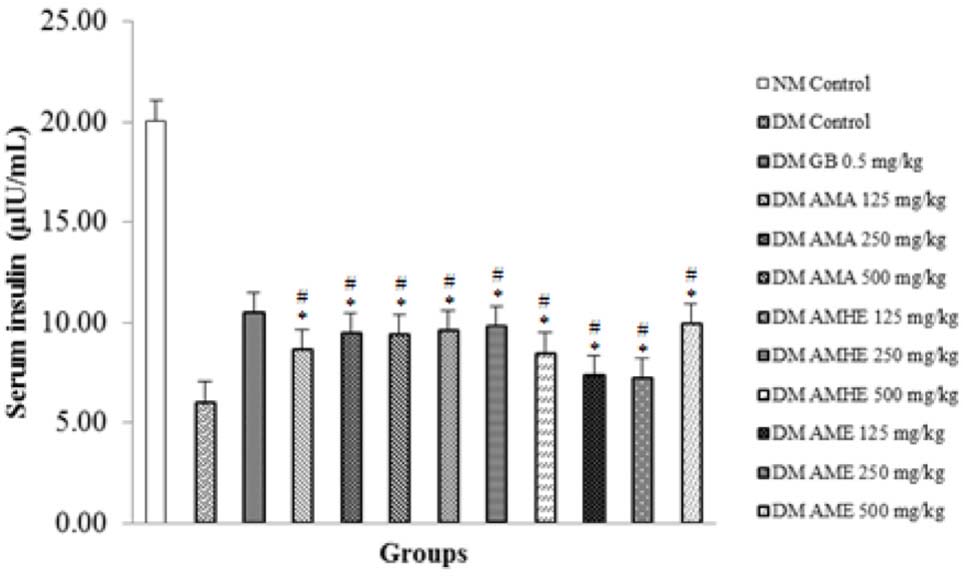 The present study was designed to investigate hypoglycemic effect of the Thai folklore recipe which contain of A. indicum and M. Pudica (1:1 w/w). The experiments were treated to comparing with current traditional medicine, anti-diabetic drug, glibenclamide to promote its traditional use for diabetic treatment. Furthermore, it was also tested for its any side effect or symptom on the renal functions, liver functions and lipid profiles in the rats. STZ (65 mg/kg bw) was selected in order to partially destroy the pancreatic β-cells. Under these conditions, insulin was secreted but not in an amount sufficient to regulate blood glucose levels and consequently, the rats became permanently hyperglycemic stage. STZ is a broad-spectrum antibiotic that separated from Streptomyces acromogenes. STZ has the cytotoxic effect on β-cells of pancreas. STZ-induced diabetes has been described as a useful experimental model to study the anti-diabetic activity of several agents.35–36

The result showed that AM had a significant FBG reduction observed in STZ- induced diabetic rats by decreasing blood glucose levels but not in a dose dependent manner. AME at the dose of 125 mg/kg bw showed higher effect than glibenclamide (0.5 mg/kg bw) especially at the 2, 5, 7 and 8 weeks. This result shows that AME at the dose of 125 mg/kg bw is approximately dosage which may be absorb into rat’s digestive system. This assumption was proved in a further study by testing with various doses of AME below 125 mg/kg bw. The experiments were indicated to hypoglycemic effect might be improve in diabetic patients due to the recipe was stimulated insulin secretion similar anti-diabetic drug, glibenclamide group.37–39 The mechanism of this effect is probably to regeneration of pancreatic β-cells which are destroyed by streptotozin.35 The recipe, A. indicum and M. Pudica, the chemical components of the plants were revealed that any phytochemical of these composed with some anti-diabetic substances including alkaloids, flavonoids, glycosides, saponins and tannins.6,23,35 Saponins and alkaloids could be inhibit glucose uptake, while flavonoids could be protect various cell types from oxidative stress-mediated cell injury.36 The flavonoids such as kaempferol as well known chemical compound which improve insulin stimulating glucose uptake in mature 3T3L1 adipocytes and protect the body against free radicals, it is biologically plausible relation between flavonoids and low risk of diabetes.37 Glycosides could be stimulated insulin secretion as well.25 These chemical substances in plants may be responsible for the anti-diabetic effects were observed in the study.

Moreover, the blood biochemical data were found that improve some renal and liver function such as BUN, AST, ALT and ALP.38 These results demonstrate that the recipe could be improve renal and liver damage 39,40 The renal dysfunction improvement could be justified by total protein increasing, as in diabetic individuals nephropathy is the main factor for protein excretion in urine.41–44 Diabetes has been a great influence on lipid metabolism caused by streptozotocin-induced as a result to increasing of TC and TG levels which observed by impaired with liver function from diabetic rat damage.44–45 Our data showed improvement of lipid profiles which increased HDL, decreased TC, TG and LDL in the diabetic rats.15,16,41 The plants could be prevent and treat disorders of diabetes which mainly responsible for mediating the formation by peroxidation of unsaturated fatty acids, cholesterol and lipoproteins, increased lipid peroxidation leads to membrane damage and consequently organs dysfunction being this an important risk factor for atherosclerosis and coronary artery disease.44,46,48–49 Decreasing on lipid levels and consequently the reduction of lipid peroxidation were improved due to the high antioxidant potential of polyphenolic compounds that act by mechanisms of reaction inhibition in the peroxidation chain and could be reduce complication resulting from diabetes.48–49

Effect of Thai folklore recipe on Lipid profiles in rats.

The study confirms the traditional uses of Thai folklore recipe from M. pudica (MAI-YA-LAP) and A. indicum (KHOB-FUN-SRI) to improvement of diabetes. The recipe also prevents complications resulting from diabetes and improve the blood biochemistry. Further studies, isolations, purifications and investigation of the chemical constituent(s) of both plants responsible for the hypoglycemic effect should be undertaken in order to confirm and clarify the mechanism behind this activity. 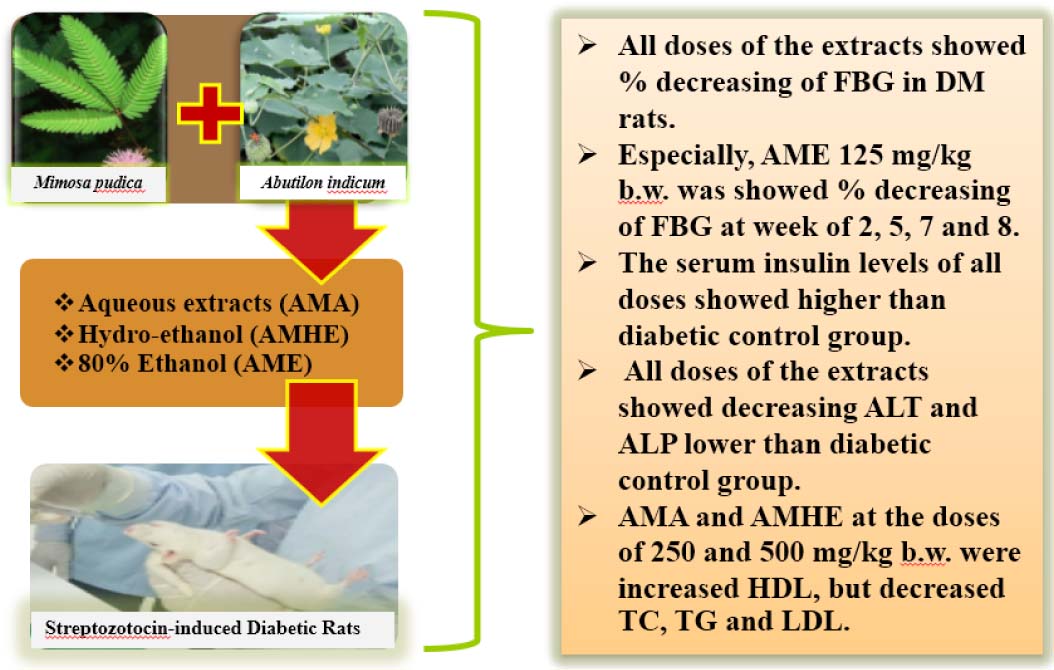 [14] Conflicts of interest CONFLICT OF INTEREST The authors declare no conflict of interest.

Ohaeri OC , author. Effect of garlic oil on the levels of various enzymes in the serum and tissue of streptozotocin diabetic rats. Biosci Rep. 2001;21:19–24

Alfy A, Ahmed A, Fatani A , authors. Protective effect of red grape seed sproantho-cyanidins against induction of diabetes by alloxan in rats. Pharmacol. Res. 2005;52:264–70