Gynura procumbens (Lour.) Merr is a well-known traditional herb and is widely used for traditional medicine by human. Previous clinical studies have shown the benefit effect of this leaves with inflammation, high blood pressure and others. This study aims to investigate the effect of methanol, ethanol, and ethyl acetate extracts of Gynura procumbens on U-87 cell line, human Glioblastoma multiforme cell line.

In the present study, effect of methanol, ethanol and ethyl acetate extracts on U-87 cell line was determined by MTT-based anti-proliferative assay and any significant changes to the cells towards apoptotic changes was observed under a light microscope.

To the best of our knowledge, this is the first study of exploring the effect of Gynura procumbens extracts using three different polarity (methanol, ethanol, ethyl acetate) effect on U-87 cell line, Human Glioblastoma multiforme cells.

Glioma is a malignant tumor of the glial tissue has reported being rapidly proliferation with diffuse invasion rate among common brain tumors in adult. Glioblastoma Multiforme (GBM) is a brain tumour which is also called IV astrocytoma.1 Patient with GBM has a very poor prognosis, with a median survival rate of 14 months’ post-surgical resection, chemotherapy, and radiation.2 Oxidative processes in the human body produce free radicals as by products, primarily reactive oxygen species (ROS) and it is associated with cancer occurrence.3 Elevated levels of ROS and down regulation of ROS scavengers and antioxidant enzymes are associated with various human diseases, including cancers.4 Hence, new effective alternative treatments are required to improve outcomes for patients with malignant gliomas.

Enormous bioactive compounds contained in plant can contribute to be an antioxidant that protect human body from free radical scavenging activity. It has been a secondary metabolite produced to defend against oxidative damage by free radical which can cause cancer. Currently, antioxidants had been applied in food and beverages industry, cosmetic industry and nutrition and supplement industry to fight against oxidative damages.5 Gynura procumbens is a plant that contains abundant bioactive compound which can provide benefit to human health. It commonly found in tropical Asian countries such as China, Thailand, Indonesia, Vietnam and Malaysia. In Malay language, G. procumbens is called Sambung Nyawa which means “prolongation of life” whereas, in Chinese language, it is called Bai Bing Cao meaning of “100 ailments”.6

The leaves of this plant often consumed in diet and studies showed that leaves contents do not have any toxic effect.7 It contains a lot of bioactive compounds such as flavonoid, phenolic acid and glycosides.8 Gynura procumbens is one of the herbal plants used for traditional treatment of various health diseases and disorder such as rash, kidney disorder, hypertension, diabetes mellitus and cancer.9 Previous clinical studies have reported the beneficial effects of herbal medicines on the survival, immune modulation, and quality of life (QOL) of cancer patients, which their use in combination with conventional therapeutics.

The previous study already stated Gynura procumbens has been used as post-treatment studies along with chemotherapy (doxorubicin) and showed a strong synergistic effect against colon cancer cells.8 Also, Gynura procumbens appears to be an effective chemotherapeutic agent against a wide range of cancer cell types, and it exerts its anticancer activities via the modulation of various points of carcinogenesis. Therefore, this study focused on study the effects of Gynura procumbens extracts to anti-proliferative activity towards associated morphological changes of human Glioblastoma multiforme cell lines (U-87).

Extraction and Isolation of Gynura procumbens

Gynura procumbens leaf extracted according to the method described by the previous studied.9 The Gynura procumbens obtained from Kuala Terengganu, Terengganu, Malaysia. The leaves were washed with running tap water and dried for 24 – 48 h by using first cooled vacuum oven (Memmert, Germany) at 40°C. Dried Gynura procumbens leaves macerated into powdered form. After that, each of 30g of Gynura procumbens powdered was soaked into three different polar solvents (methanol, ethanol and ethyl acetate) with a ratio 1:10 for 24-h. Finally, all the extracts from all solvent were filtered using Whatman ® No. 41 filter paper (pore size 20-25 µm) and were then concentrated under reduced pressure at a temperature of 40°C and stored at a temperature of -20°C until it used for further analysis. For screening the extracts of the Gynura procumbens, 100 mg of the sample dissolved in 1mL of DMSO to obtain a 100 mg/mL stock solution of extracts. All extracts kept at 4°C throughout the experiment. Stock solutions further diluted in a RPIM-1640 (Sigma, MO, USA) media to obtain a final concentration of 100µg/mL.

Cell Culture and Harvesting of U-87 Cell Line

The Human Glioblastoma multiforme cell line (U-87) were purchased and maintained at a temperature of 37°C in a humidified CO2 incubator with 5% CO2 in RPMI-1640 media supplemented with 10% fetal bovine serum and 1% of antibiotic. Cell medium changed every 3 days and the cells reached confluence after a week of culture. Cells were maintained at 95% relative humidity while changing the media at least twice a week.

MTT Assays and Determination of IC50

The anti-proliferative activity of extracts from the Gynura procumbens were obtained using the micro-titration colorimetric method of tetrazolium salt reduction, 3- [4, 5-dimethylthiazol-2-yl]-2-5-diphenyltetrazolium bromide (MTT) to determine cell viability.10 Exponentially growing cells were harvested, enumerated using the hemocytometer and diluted with a medium. A cell volume with a concentration of 1.0 × 104 cells/mL was prepared and was plated (100 μL/well) into 96-well plates (NUNCTM, Denmark). Before the addition of cells into the plates, the stock solution of Gynura procumbens was diluted with media, transferred into the wells and sequentially added to achieve the starting concentration of 100 μg/mL in DMSO and was serially diluted to achieve the concentration range of 100-0 μg/mL.

After that, the Gynura procumbens extracts were plated out in triplicates. Each plate included untreated cells as control and a blank cell-free control. The anti-proliferative effect of each Gynura procumbens extract against untreated cells was measured in triplicate for a trial of 24 h, 48 h and 72 h respectively. After incubation, 20 µg/mL of MTT solution was added to each well to be re-incubated for another 4 h at the same conditions. Then, the media removed and 100 µL of DMSO was pipetted into each well to solubilize the formazan crystals and incubated for another 15 min. Lastly, the absorbance measured at 570nm by using ELISA micro-plate reader (TECAN, INFINITE M2000). The relative viability of the treated cells as compared to the control cells expressed as the percentage of cell viability count. The calculation of Cell Viability percentage: [570nm of treated cells] / [570nm of control cells] × 100%.

Morphology Studies of U-87 Cell Line

The Human Glioblastoma multiforme cell line (U-87) was grown in 4 well plates and treated with extract residue from the leaves of Gynura procumbens obtained using ethanol, methanol, and ethyl acetate as a solvent. The morphology study run at a temperature of 37°C for duration of 0, 24, 48, and 72 h; morphological changes were occurring in the cells observed under a light microscope (Nikon, Japan).

Morphological changes of U-87 cell line assessed at 24, 48 and 72 h after treatment with Gynura procumbens extract for 72 h [Figure 2]. In the experiment, under treated control conditions (0 h), cells appeared healthy and grew up to 90% of confluences in methanol, ethanol and ethyl acetate extracts. For ethanol and methanol extracts, the U-87 cell line slowly exhibited the characteristic features of cell shrinkage, and partial detachment after 24 h as compared to control conditions (0 h). At 72 h, cell lines incubated with ethanol extract continued to exhibit features of blebbing and demonstrated the lobulated appearance of loss normal shape. Meanwhile, cell lines incubated with ethyl acetate extract shows cells that looked smaller in size or shrunk stated as per N/C ratio (nuclear-cytoplasmic ratio) after 24 h. Along with treatment until 72 h, there is no major presence of cell shrinkage, rounding and partial detachment, floating of cell and lobulated appearance to be apoptotic cells.

Natural sources such as plants and fruits had been studied to be potential in curing cancer without giving excessive damage to normal body cells. The previous study also had supported that anticancer drug should have destroyed or inhibited cancer cells without causing excessive damage to normal cells.11 In this study, the anti-proliferative activity of methanol, ethanol and ethyl acetate extracts of Gynura procumbens in inhibiting the U-87 cell line determined by using MTT assay and determination of IC50 value. MTT assay is the basis for numerous in vitro assays that includes only the measurement of cell viability and proliferation.12 The IC50 value depended on relationship number of cells, amount of MTT formazan generated and duration of cell incubated.13

The present study had shown the anti-proliferative activity of Gynura procumbens extracts on U-87 cell line [Figure 1]. Crude extracts possessing an IC50 value less than 20 µg/mL are considered active against the tested cancer cells based on past studied.14 In the present study, ethanol and methanol extracts were found to show the highest inhibitory effects of U-87 cell line at IC50. This finding supported that ethanolic extract of Gynura procumbens shown to be effective against carcinogenic effect DMBA on liver.15 The treatment had shown inhibition of cell proliferations; suppress the invasive and migratory abilities of cancer cells.16

Cell morphological pattern of U-87 cell line after treated with Gynura procumbens extract at 0 (i), 24 (ii), 48 (iii) and 72 (iv)h. The photographs were taken at x20 magnification with inverted microscope (Nikon, Japan). 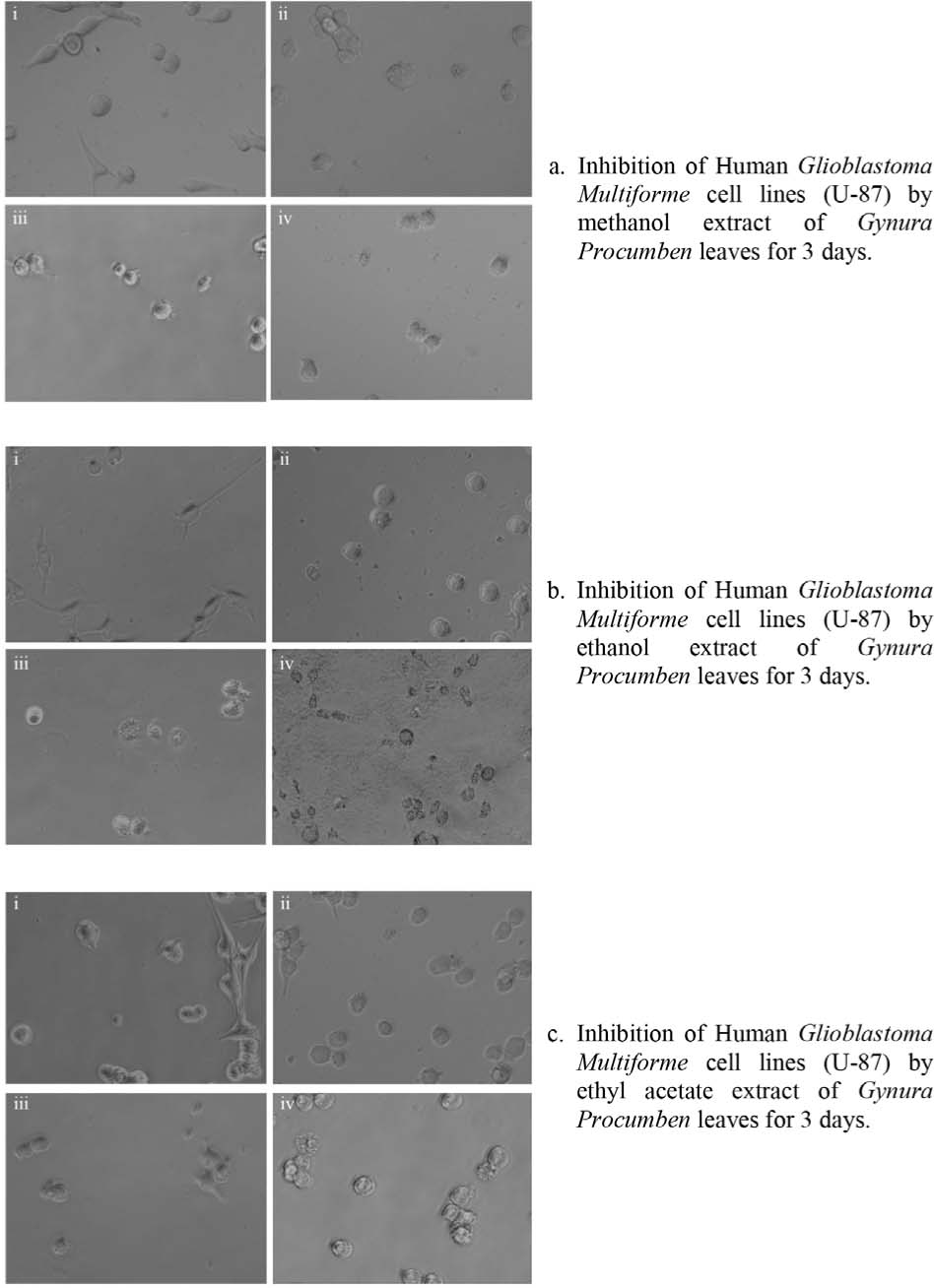 Anti-proliferative effect of U-87 cell line by methanol, ethanol and ethyl acetate extracts of Gynura procumbens.

Gynura procumbens extracts appear to be a potential source of natural antioxidants may due to its high phenolic content.17 In the other hand, the content of total phenolic in Gynura procumbens extracts can listed in the decreasing order of methanol, ethanol and aqueous.18 The result was contrasted with a present study, the inhibitory effects listed in the decreasing order of ethanol, methanol and ethyl acetate. There is past study that detailed that as an extract from the plant covers numerous different active biological compounds, it is possible that the irregularity of Gynura procumbens benefits is due to batch variation, in which certain batches may have high total phenolic than another batch.19

The statement also was supported by others,20 while there is various amount of phenolic and non-phenolic compound dependence on the extraction solvent used for extraction procedure. Despite the discrepancy between IC50 values, the morphological changes had yet exhibited the characteristic features of blebbing and lobulated appearance to be apoptotic cells of U-87 cell lines incubated with ethanol extract. Morphological changes in a cell committing apoptosis can initially visualized under a light microscope.21 However, specific mechanism of anti-proliferative activity of Gynura procumbens extracts needs to add in the future for more efficacy result.

Gynura procumbens extracts had tested for their potential anti-proliferative activity in U-87 cell line. The result showed that the ethanol extract explicated potential anti-proliferative effects compared to methanol and ethyl acetate extracts which reflecting the potential use in future as an alternative therapy. With present result and literature reviews, this plant could be an important source of safer cytotoxic compounds with further exploration. Therefore, there is a need to further explore potential and benefits of methanol and ethanol extracts of Gynura procumbens at molecular levels and revealed the important chemical constituents and bioactive molecules, responsible for anti-proliferative activity. 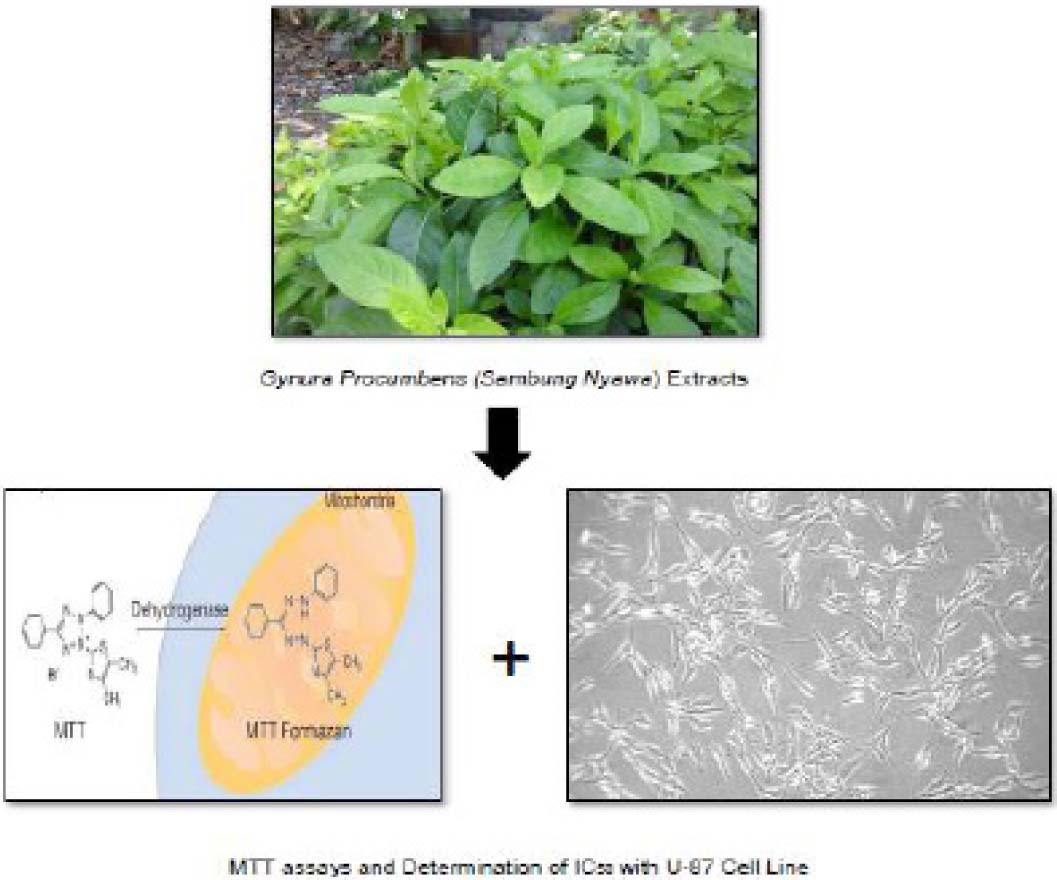 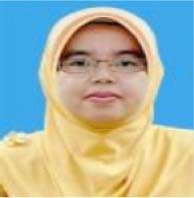 Mrs. Norhayati Abd Hadi: Obtained a Bachelor’s Degree from Universiti Malaysia Terengganu (UMT) in Food Service and Nutrition (2000 - 2003) and Master’s degree from Universiti Putra Malaysia (UPM) in Clinical Nutrition (2003 - 2006). Work as Senior Lecturer at Universiti Sultan Zainal Abidin (UniSZA) and specializes in the Nutrition and Psychology Promotion, Nutrition and Food and Hospitality Services fields. Currently, she is pursuing a PhD in Universiti Malaysia Terengganu (UMT) for a study on the effects of honeybee and stingless bee honey supplementation on subjects with cardiovascular risk factors.

David H , author. Vegetables, Fruits and phytostrogens in the prevention of diseases. Journal of Postgraduate Medicine. 2004;50:145–9