This study was conducted to identify some bioactive compounds of Boesenbergia rotunda rhizome and to test as antioxidant and antimicrobial agents.

The milled dried rhizome of B. rotunda (5kg) was extracted exhaustively with ethanol. The ethanol extract was partitioned three times by n-hexane, chloroform, and ethyl acetate respectively. Each fraction was fractionated by vacuum liquid chromatography (VLC) and then purified by column chromatography gravitation. Structural identification of all pure compounds were elucidated based on spectroscopic methods (UV, IR, and NMR).The antioxidant activity was tested by 2,2-diphenyl-1-picrylhydrazyl (DPPH). Antimicrobial character was screened for activities againts pathogenic bacteria i.e. Escherichia coli ATCC-11229, Staphylococcus aureus ATCC-25923, Staphylococcus epidermidis FNCC-0048, and Streptococcus mutans by the disk-diffusion method. The assay was done in triplicate, and chloramphenicol was used as the positive control.

From ethanol extract of B. rotunda three known compounds of flavanones, namely 2’,4’-dihydroxy-6-methoxychalcone (compound-1), 5-hydroxy-7- methoxyflavanone (compound-2), and 5,7-dihydroxyflavanone (compound-3) were isolated. The ethanol extract of B. rotunda and the three isolated compounds -1,-2, and -3 showed an antioxidant activity with the IC value of 92.64; 46.66; 62.84, and 62.66 µg/mL, respectively.The zone of inhibition of extract and the three isolated compounds showed moderate activity against Escherichia coli ATCC-11229, Staphylococcus aureus ATCC-25923, Staphylococcus epidermidis FNCC-0048, and Streptococcus mutans.The maximum zone of inhibition was 13.20±0.76 mm at the maximum concentration used (500 µg/mL) against Escherichia coli ATCC-11229, and the minimum inhibitory concentration(MIC) for each bacteria was found to be 0.5µg/mL.

The result of the study suggests that B. rotunda rhizome contains potential bioactive compounds which could be suitable for antioxidant and the treatment of various infections caused by Escherichia coli ATCC-11229, Staphylococcus aureus ATCC-25923, Staphylococcus epidermidis FNCC-0048, and Streptococcus mutans.

The plant of Zingiberaceae family spread in South Asia and Southeast Asia, consisting of 47 genera and approximately 1000 species.1,2 The rhizome of this plant have a high commercial value because it contains volatile oil and other important compounds of enormous medicinal values and food processing.3 Kaempferia is a genus, and belongs to family of Zingiberaceae. This plant grows in Southeast Asia, India, Sri Lanka, Indonesia, and Southern China. Boesenbergia rotunda L. is synonym with Kaempferia pandurata ROXB. The local name in Indonesia is “Temu kunci”, this plant is a common edible ingredient in many Asian countries. In Indonesia, B. rotunda is typically used to prepare “jamu,” a popular traditional tonic for women after childbirth as well as a beauty aid for teenage girls and to prevent leukorrhea.4

Samples of the rizhome of B. rotunda were collected in December 2015 from the Beringharjo market, Yogyakarta, Indonesia. The plant was identified by the staff at the Faculty of Biology, Gadjah Mada University, Indonesia and a voucher specimen (BR-01-2016) was deposited at the Organic Laboratory, Department of Chemistry Education, Universitas Negeri Yogyakarta, Indonesia.

The milled dried rhizome of B. rotunda (5 kg) was macerated by ethanol at 24 h for three times. The filtrate was separated by filtrationand evaporated to dry using vacuum evaporator and yielded brown residue for about 147.6 g. The ethanol extract of B. rotunda (100 g) was partitioned within three times using n-hexane, chloroform, and ethyl acetate, respectively. Each fraction was evaporated to dryness under vacuum to yield brown residue chloroform fraction (50 g), and ethyl acetate fractions (30 g), while the hexane fraction was found to be an oil.

Antioxidant activity was analyzed by DPPH (2, 2-diphenyl-1-picrylhydrazyl) method. The method was adopted with slight modification of Hanumantharaju.11 DPPH was used as the source of free radical. About 5 ml of the sample (in various concentration: 100-3.125 µg/mL) and positive control (ascorbic acid in various concentration: 6.25-0.390 µg/mL) were mixed with 5 ml of methanolic solution of DPPH (0.12 mM) and kept in the dark bottle at room temperature for 30 min. The DPPH scavenging activity was determined using spectronic 20 (Genesys) at 516 nm against DPPH solution as control. The samples were tested in triplicates. The antioxidant activity was calculated as percentage of DPPH that was decreased in comparison with the control (blank) and the inhibition activity could be calculated to determine the IC50.

Screening of antimicrobial activity of the crude extract samples and three isolated compounds was done by using agar diffusion method. The method was adopted with slight modification of Bisnu.12 Four organisms of Escherichia coli ATCC-11229, Staphylococcus aureus ATCC-25923, Staphylococcus epidermidis FNCC-0048, and Streptococcus mutans were used in this study to determine the antimcrobial activity of the crude extracts and isolated compounds. In disk- diffusion method, nutrient media was used as a culture media and the cavities were made aseptically over the bacterial culture on nutrient agar plates using borer and filled with standards of chloramfenicol as positive control, while DMSO (dimethyl sulfoxide) was used as solvent and also as a negative control.

The paper disk was immersed in the solution of each sample for five minute and then placed on the media, and incubated at 37°C for 6 to 24 h, with observations for every 6 h. On every six-h observation after incubation, the zone of inhibition around the disks was measured in millimeter scale. A five serial dilution (0.5; 5; 50; 250; and 500 µg/mL) was carried out for each sample. All experiments were performed in triplicate. The MIC (Minimum Inhibitory Concentrations) value was determined using broth dilution method.

From the dried and milled rhizome of B. rotunda (5 Kg), three compounds were isolated. Compound-1 was isolated from ethyl acetate fraction, while from the chloroform fraction it was obtained two compounds, compound-2 and compound-3. The structure identification of the compounds as corresponding UV, IR and NMR spectra obtained the following data.

The compound-2,5-hydroxy-7-methoxyflavanone (pinostrobin) andcompound-3, 5,7-hydroxy-dihydroxy flavanone (pinocembrin) can be isolated from Kaempferia rotunda.14 and from the genus Bosenbergia. The both compounds are a major component, so in this study was obtained from the fraction of ethyl acetate and chloroform. This compound is a major component in the rhizome of B. rotunda plant, and previously this compound has been obtained as a crystalline solid in the ethanol extract of rhizome B. rotunda.15 The structures of isolated compound-1, -2, and -3 are show in Figure 1.

Antioxidant activity assay for the samples were indentified using DPPH method. Antioxidant activity test by DPPH method is based on the reaction of DPPH radical attacked by antioxidant compounds through the oxygen atom transfer mechanism, which produces DPPH-H molecule non-radical stable form.16 In this research an activity test has been conducted as DPPH radical scavenger from ethanol extract of B. rotunda, isolated compounds, and ascorbic acid (positive control) at various concentrations with in three times measurements (triple). The data of percentage of activity at various concentration were used to determine the value of IC50 (that is the concentration of sample having inhibition activity of 50%) from each sample following linear regression equation.The inhibition activity (IC50) of ethanol extract and isolated compounds from B. rotunda are presented in Table 2.

The structure of the three isolated compounds from ethanol extract of B. rotonda

The Inhibition activity (IC50) of extract, isolated compounds of B. rotunda and positive control.

Zones of inhibitions as shown by ethanolic plant extract of B. rotunda and isolated compounds at different concentrations against selected microorganisms.

The graph of inhibition activity of each sample. 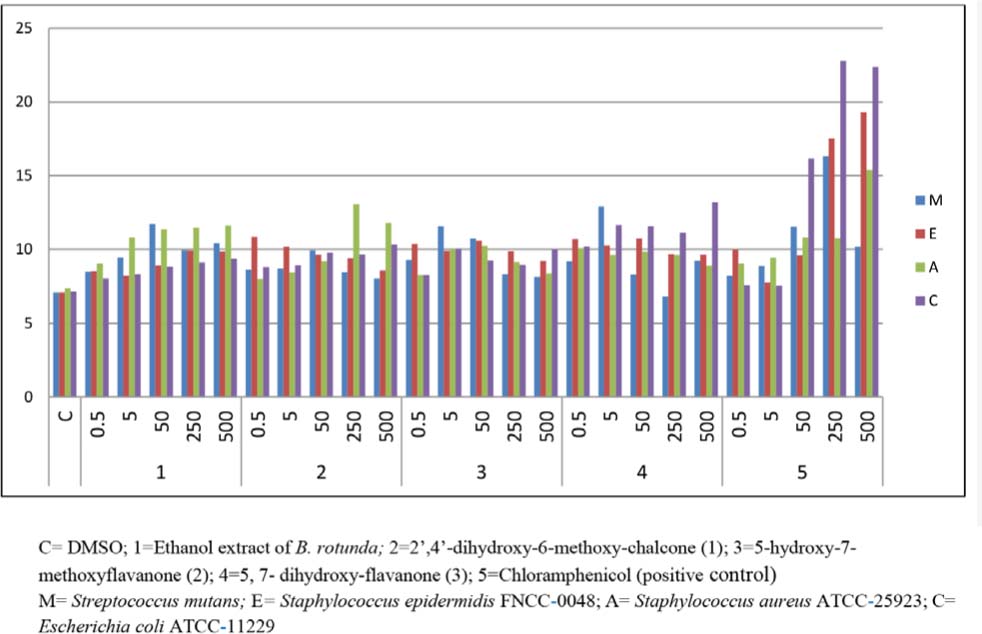 These results indicated that ethanol extract of B. rotunda and isolated compounds exhibited significant radical scavenging activity with IC50, being lower than 100 µg/mL. Ascorbic cid is an antioxidant compound that is widely known, showed very high antioxidant activity and is used as a positive control as practiced by Biswas.17 Some studies show many secondary metabolites derived from plants are antioxidants, especially phenolic compounds such as flavonoid and polyphenol. The chemical activity of a number of antioxidants depends on a number of factors, including the stability and reactivity. Primary antioxidants forming a bond with the radical after hydrogen removal is more important than any other factor. Phenol compounds include a number of compounds generally have aromatic rings with one or more hydroxyl groups.18 Screening of antimicrobial activity of the crude extract samples and three isolated compounds was done by using agar disk-diffusion method activities againts pathogenic bacteria i.e. Escherichia coli ATCC-11229, Staphylococcus aureus ATCC-25923, Staphylococcus epidermidis FNCC-0048, and Streptococcus.. The zones of inhibitions for each of compounds against pathogenic bacteria are presented in Table 3. Furthermore, to clarify the inhibition activity of each sample the corresponding graph should be performed as in Figure 2.

In this study, the ethanol extract from B. rotunda and isolated compounds showed inhibition activity against four types of bacteria used, namely Streptococcus mutans, Staphylococcus epidermidis FNCC-0048, Staphylococcus aureus ATCC-25923, and Escherichia coli ATCC-11229 with moderate inhibition criteria.19 However, these data indicated that the ethanol extract of B. rotunda showed the highest inhibition zone in Streptococcus mutans bacteria at concentration of 50 μg/mL; 2 ‘, 4’-dihydroxy-6-methoxy-chalcone showed the highest inhibitory activity against Staphylococcus aureus ATCC-25923 bacteria at a concentration of 250 µg/mL; 5-hydroxy-7-methoxyflavanone showed the highest inhibitory activity against Streptococcus mutans bacteria at concentrations of 5 µg/mL; and 5, 7- dihydroxyflavanone showed the highest inhibitory activity against Escherichia coli ATCC-11229 bacteria at a concentration of 500 μg /mL.The results of previous studies showed that each compound showed antimicrobial activity with different mechanism. They can inhibit cell wall synthesis, cause energy depletion by accumulating in cell membranes, disrupt the permeability of cell membranes, caused membrane disturbances, modify cellular constituents, cell damage or cell mutations.20

From these results it can be concluded that the ethanol extract of B. rotunda rhizome can be isolated the three flavanones, namely 2’, 4’-dihydroxy-6-methoxychalcone (compound-1), 5-hydroxy-7-methoxyflavanone (compound-2), and 5, 7-dihydroxyflavanone (compound-3). The ethanol extract of B. rotunda rhizomes and the isolated compounds showed significant antioxidant activity by DPPH and antibacterial activity against Escherichia coli ATCC-11229, Staphylococcus aureus ATCC-25923, Staphylococcus epidermidis FNCC-0048, and Streptococcus mutans. Thus B. rotunda rhizomes can be developed as a natural antioxidant and antibacterial agents. 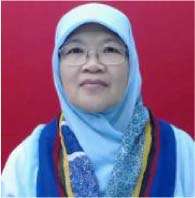 Prof. Dr. Sri Atun: Lecturer in the Department of Chemistry Education, Faculty of Mathematics and Natural Science, Universitas Negeri Yogyakarta, in the field of Natural Products and Biomedicine Chemistry. 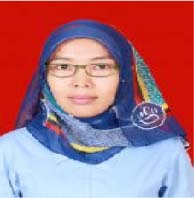 Dr. Sri Handayani: Lecturer in the Department of Chemistry Education, Faculty of Mathematics and Natural Science, Universitas Negeri Yogyakarta, in the field of synthesis organic 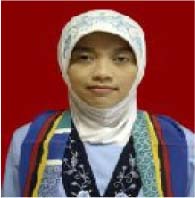 Anna Rakhmawati: M.Sc Lecturer in the Department of Biology Education, Faculty of Mathematics and Natural Science, Universitas Negeri Yogyakarta, in the field of Microbiology