The present work reported the antioxidant and chemical screening of Brazilian plant aqueous and organic extracts.

Present findings described that Amazon plant extracts have a huge potential to be a source of antioxidant compounds to be used in preventive medicine, as well as the chemical screening revealed that their plants can be strategically assessed as a source of alkaloids to be tested in further biological assays.

Naturally occurring antioxidants play an important hole in therapeutics. Curcumin, a diarylheptanoid compound, has shown to be effective against some types of cancer due to its antiproliferative effect caused by inhibiting angiogenesis and by inducing apoptosis, in vitro.1 Also, curcumin was shown to have neuroprotective properties that may postpone or even prevent diseases as Alzheimer’s, due ti its anti-inflammatory and antioxidant properties.2 Recent studies described the screening of Brazilian plant extracts for the antioxidant activity, as was made with six plant extracts aiming their antioxidant and photoprotective activity, which showed that the extract from Dalbergia monetaria is a potentially source of new antioxidants to be used in photoprotective formulations.3 The alcoholic extract from the rhizomes of Aristolochia cymbifera and the aqueous extracts of the leaves of Caesalpinia pyramidalis and Cocos nucifera were evaluated against micro-organisms related to oral diseases, as well as their antioxidant activity was assessed and showed to be more effective than those observed to Ziziphus joazeiro, a well known antibacterial traditional plant.4

Amazon rain forest is the biggest in the world, as it is the richest in terms of biodiversity, both for plants and animals,5 although much of it remains unknown from the pharmacological point-of-view. Such biological richness corresponds to a chemical diversity that is of interest to the prospection of new drugs to be introduced to therapeutics,6 particularly those aiming the antioxidant preventive and therapeutic potentiality. Still, high-throughput assays are the fastest, inexpensive and easily expanding way of analyzing the vast Amazon rain forest diversity that remains unexploited to today.7

Our group aimed at the chemical screening of 895 organic and aqueous extracts obtained from plants found in the Amazon rain forest that have been preciously screened for their biological,8-10 pharmacological and toxicological activities.11-16 The extracts were tested for their free radical scavenging and antioxidant activities, as well as screened for the presence of alkaloids, anthraquinones and cardenolides, some of the most active classes of phytochemicals.12

Plant material was collected under Brazilian Government law, according to official documents #14895 [MMA/ICMBio/SISBIO] and #012A-2008 [IBAMA/MMA/CGen]. Plants were collected in the Amazon rain forest, (02° 23’ 41” S 60° 55’ 14” O); Manaus and Novo Airão, Amazonas, Brazil, and in the Atlantic Rain Forest, (24° 35’ 30” S 47° 27’ 7” O), Southern coast of the State of São Paulo, Brazil. Different parts of the plants were obtained (stem, leaf, flowers, fruits or roots), according to their biomass availability. Botanical material (i.e., vouchers) was collected and stored following the standard recommendations for botanical collections. Vouchers numbers are given in Table 1; all vouchers are deposited at the Herbarium UNIP. The botanical determinations were done in laboratory, with aid of taxonomic keys and specialist expertise.

Each plant part was separatedly dried in an air-circulating stove (Fanem, Diadema, São Paulo, Brazil) at 40°C (i.e., a temperature that is usually used to dry crude plant material). Each plant part has provided an organic and an aqueous extract, made by a 24 h maceration with a 1:1 (v/v) mixture of dichloromethane (DCM) and methanol (MeOH), followed by 24 h maceration with distilled water.13 Solvents were removed under vacuum or lyophilized. Three hundred milligrams of each extract were weighed in a 5 mL vial and diluted with 3.0 mL of DCM/MeOH or water to obtain a concentration of 100 mg/mL.14

Thin layer chromatography silica gel GF254 plates (Merck®) were used in the analysis. Two mobile phases were chosen to be used12 ethyl acetate: formic acid: acetic acid: water (100:11:11:26) and ethyl acetate: methanol: water (100:35:10). β-carotene,15 (B) 2,2-diphenyl-1-picrylhydrazyl (DPPH) were used as reagents. The evaluation of the free radical scavenging analyses were made by the establishment of scores as strong (++++), very good (+++), good (++), weak (+) and absence of free radical scavenge activity (0).16 The following reagents were used in the chemical analysis:11 (C) Dragendorff’s reagent, (D) 5% KOH diluted in ethanol for checking the presence of anthraquinones; (E) Kedde’s reagent. 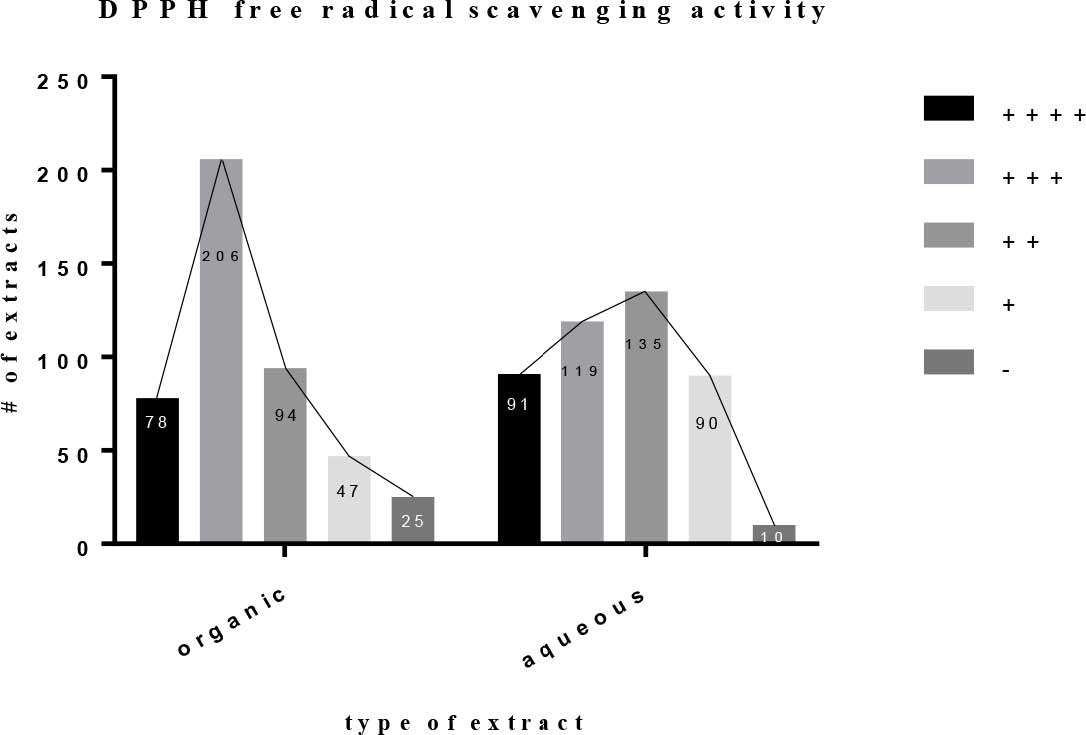 In the present work, 895 plant extracts divided in to 450 organic extracts (50.28%) and 445 aqueous extracts (49.72%) were analyzed. It was observed that 77 (8.60%) of 895 plant extracts showed antioxidant activity in the β-carotene/bleaching assay (Table 1). Beta-carotene/bleaching assay tends to identify compounds that can chain-break free radical reactions, particularly initiated by light exposition and that consequently protect β-carotene from suffer radical reaction, such as compounds having phenolic rings and hydroxyl groups.

Contingency table related to Pearson’s χ2 test conducted with plant extracts submitted to the evaluation of antioxidant activity in the β-carotene assay and to the DPPH free radical scavenging assay.

Seventy three plant extracts, or 8.16%, presented alkaloids (Table 2). According to a chemosystematic approach, some groups of plants are more likely to biosynthesize alkaloids. So, in the present work alkaloids were found in the following families, which has been shown to present this class of compounds as cited: Annonaceae, Apocynaceae, Bignoniaceae, Capparidaceae, Chrysobalanaceae, Clusiaceae, Convolvulaceae, Euphorbiaceae, Celastraceae, Lauraceae, Fabaceae, Olacaceae, Piperaceae, Rubiaceae, Rutaceae, Sapindaceae and Solanaceae.

Eight (0.89%) plant extracts obtained from plants of the families Apocynaceae, Capparidaceae, Lauraceae, Fabaceae, Rubiaceae and Rutaceae, showed positive reactivity to KOH reagent, indicating the presence of anthraquinones (Table 2), which has been shown to present this class of compounds as cited.

The search for new medicines from natural sources has developed rapidly in the last half century due to the introduction of high-throughput biological and phytochemical screening assays that enabled analyses of large amounts of samples bypassing traditional time-consuming techniques.14 In the present work, plant extracts were obtained from Brazilian plants. The collection strategy was based on chemotaxonomic approach, as well as an eventual collection of a random species, especially if they were in the reproductive phenophase. As a general rule, plants used in traditional medicine were not our main target, but eventually they were collected in the field. Also, plant parts can vary in terms of their chemical constituents, and for that reason, collecting different organs of the same plant was done in order to obtain a significant amount of the chemical substances produced by the plant. Collection of terra firme trees are hard to perform as it depends on safety equipments and training in climbing techniques, so it is likely to have aerial parts being collected, once trees canopies can eventually reach 50 m tall. For that reason, aerial parts have been collected for trees. Also, in terms of ethics in accessing the Brazilian genetic patrimony, collections have to be performed in order to keep physiology of the plant as functional as possible, so, a limited portion of each plant material was collected, rarely the roots of the plants.

The Amazon rain forest, one of the tropical rain forests located in Brazil, is under the constant influence of sun radiation all the year around, in contrast, temperate forests perceivethe clear temperature change depending on seasonality. Also, there is an elevated amount of precipitation in tropical forests. As a result, such climate conditions favours a warm and umid climate that prepossess the occurrence of high levels of biodiversity, including all organisms, particularly the plants. It is expected that the constant high levels of sunlight irradiation, including UV wavelengths, particularly UV-B, may produce free radicals within the plant tissues, and in a direct response to this phenomenon the plant organism is stimulated to produce more enzimes related to the production of specific secondary metabolites, as phenolic compounds and flavonoids to work as antioxidant molecules protecting noble molecules as DNA, RNA and lipoproteins.18 For that reason, the Amazon rain forest is one of the main spots on the planet where chemical and biological screening programs are the easiest and cheap ways of identifying plants as a potential source of new medicines. The present work reports the chemical screening of 895 plant extracts aiming the identification of their antioxidant potential, as well as to look for alkaloids, quinones19-20 and cardenolides derivatives,21 which are compounds already related to antioxidant activity.

In the present work, TLC techniques were adopted. Despite limitations of TLC assays being applied to screen for antioxidant and to prospect for the presence of phytochemicals, it is easily established in any laboratory and is approved by the World Health Organization for the quality control of plant-derived drugs.

Alkaloids is a group of substances that can exert antioxidant properties, depending on the presence of a phenolic ring in their structure.23 In our report, we have found that 8.16% of the tested extracts contained alkaloids, mostly observed in Fabaceae and Apocynaceae, although their occurrence in Annonaceae and in Rubiaceae was somewhat expressive. From the 73 alkaloidic extracts only four did not show radical scavenge activity, but three of them have shown β-carotene/bleaching response. According to our results, families showing alkaloids can indeed be considered as a target group to undergo antioxidant and chemical screening of molecules to be tested in biological screening,

Present findings described that Amazon plant extracts have a huge potential to be a source of antioxidant compounds to be used in preventive medicine, as well as the chemical screening revealed that their plants can be strategically assessed as a source of alkaloids to be tested in further biological assays, both aiming treatment and prevention of diseases.

All authors have none to declare.

- 895 Brazilian Amazon aqueous and organic plant extracts were evaluated by their free radical scavenging and antioxidant activities;-plants were also evaluated for the presence of alkaloids, cardenolides and anthraquinones;-present findings described that Amazon plant extracts have a huge potential to be a source of antioxidant compounds and a source of alkaloids to be tested in further biological assays.

Journal:
Free Radicals and Antioxidants
‹ Evaluation of Antioxidant and Immunomodulatory Potential of Methanolic Extract of <italic>Juniperus squamata</italic> Buch.-Ham. ex D.Don up Evaluation and Comparison of Antioxidant Activity of Leaves, Pericarps and Pulps of Three Garcinia Species in Malaysia ›