Evaluation and Comparison of Antioxidant Activity of Leaves, Pericarps and Pulps of Three Garcinia Species in Malaysia

Chew and Lim: Evaluation and Comparison of Antioxidant Activity of Leaves, Pericarps and Pulps of Three Garcinia Species in Malaysia

Garcinia genus plants are a group of well-known fruit trees in Malaysia.The botanical parts of the trees are used for medicinal purposes, where they are prepared as decoction, pastes for wound infections, and some have been consumed as food. Objectives: This paper focused on the assessment of antioxidant potential of three selected Garcinia species commonly used in Malaysia.

Garcinia species have been used widely in Asia countries, especially countries in Southeast Asia. The investigation of various antioxidant activities could potentially identify the suitable candidates as sustainable source of antioxidative agents.

Excessive free radicals such as reactive oxygen species and reactive nitrogen species may be harmful because they can initiate biomolecular oxidations which lead to cell injury and death, and create oxidative stress which results in numerous diseases and disorders, such as cancer, ageing, neurodegenerative disease, arteriosclerosis, and gastric ulcer. Uptake of antioxidants from plant source could help to reduce the harmful effect of excessive free radicals.1 Many antioxidant compounds present in plant have been identified as free radical scavengers.2 There is an inverse relationship between the dietary intake of antioxidant-rich food and prevalence of human diseases.3 Antioxidants from plants are effective in health and disease prevention.4 Antioxidants can be found abundantly in fruits. Some fruits are rich in antioxidants, such as blueberries, kiwis, grapefruits, prunes and mangosteens.5

Garcinia (Family: Guttiferae) is a large genus of polygamous trees or shrubs, distributed in the tropical Asia, Africa, and Polynesia. Plants from Garcinia genus are a group of well-known fruit trees in Malaysia. The fruits of Garcinia species are mostly edible and some are served as a substitute for tamarinds in curries. Botanical parts of Garcinia trees have been used as traditional medicines by the Malaysian community. Garcinia mangostana, also known as mangosteen, is a slow-growing tropical tree, which can grow up to 25 m in height.6 Its pericarp is dark purple to red-purple in colour while the edible pulp is white, soft, and juicy and sweet. Burkhill6 reported that the pulp is believed to have detoxification properties. It could relieve thirst in fever and used as an astringent. The Malays make a conserve called halwa manggis by boiling the arils of unripe fruits with sugar. Decoction made from the leaves and bark is used to treat fever, urinary disorders, dysentery and opened wound.6-7 G. hombroniana (Malay: beruas, manggis hutan) is a small or medium tree which produces globose fruit in bright red colour. It is found near coastal primary and secondary forest of tropical countries. Their roots are used to make herbal decoction for women after childbirth and the leaves are used to relieve itching.6 G. atroviridis (Malay: asam gelugor) is a medium-sized tree up to 25 - 27 m tall and grows wildly throughout Peninsular Malaysia lowland forest. Its sourish fruit is used as seasoning. (-)-Hydroxycitric acid (HCA) in the fruit is proved to be effective towards weight management.8 The juice from the leaves is given as a health tonic to woman after childbirth by the Malays to aid recovery.6 Decoction prepared from the leaves and roots is used to treat ear-ache.6

These three Garcinia species are commonly consumed by Malaysian community as food, seasonings and used as traditional medicines. In view of the potential benefits listed above, it is therefore of great interest to evaluate the antioxidant activities of leaves, pericarps and fruit pulps and perform the statistical comparison.

The total phenolic content (TPC) of extracts was measured quantitatively using Folin–Ciocalteu method as described previously.10-11 Briefly, Folin–Ciocalteu’s phenol reagent (1.5 mL, 10% v/v) and 1.2 mL of 7.5% w/v sodium carbonate were added to the 0.3 mL extract. The reaction mixture was thoroughly mixed and was then incubated in the dark for 30 min, followed by measurement of the absorbance at 765 nm. TPC was expressed in terms of mg gallic acid equivalents (GAE) per 100 g sample.

Free radical scavenging (FRS) activity was assessed based on the method previously described.11 Two mL of 0.15 mM 2, 2-diphenyl-1-picrylhydrazyl (DPPH) (in methanol) was added to the 1.0 mL serially diluted extracts. The reaction mixture was incubated for 30 min after which its absorbance was measured at 517 nm. Methanol was used as blank. Negative control was prepared by replacing the extract with methanol. The decrease in absorbance was calculated as an IC50, concentration of extract required to reduce the absorbance by 50% and the results were expressed as mg ascorbic acid (AA) equivalents per 100 g sample (AAE) as follow.

The ferric reducing power (FRP) was evaluated as previously described.11 Potassium phosphate buffer (2.5 mL, 0.1 M, pH 6.6) and 1% w/v potassium ferricyanide (2.5 mL) were mixed with 1.0 mL of extracts of varying dilutions. The reaction mixture was incubated at 50˚C for 20 min, followed by the addition of 2.5 mL of 10% w/v trichloroacetic acid. Water (2.5 mL) and 0.1% w/v ferric chloride (0.5 mL) were then added to 2.5 mL of the reaction mixture, and the solution was incubated at 28˚C for 30 min to facilitate colour development. The absorbance was measured at 700 nm and the results were expressed as amount of gallic acid equivalents in mg per gram sample (mg GAE/g).

The ferrous ion chelating (FIC) assay was performed as described in Chew, Goh.10 0.1 mM ferrous sulphate (1 mL) was added to various dilutions of the extracts (1 ml; concentration between 1.0 – 7.0 mg/mL), followed by the addition of 0.25 mM ferrozine (1 mL). The reaction mixtures were allowed to stand for 10 min and the absorbance was then taken at 562 nm. The ferrous ion chelating property of extracts was expressed as percentage chelating activity using the following formula.12

Chelating activity (%) = (Acontrol – Asample)/Acontrol × 100; where Acontrol and Asample are the absorbance of the control and extract, respectively. Extraction solvent was used to replace the extract in control.

All assays were carried out in triplicates. The experimental results were expressed as mean ± standard deviation. The data were analyzed using one-way analysis of variance (ANOVA) using SPSS version 20.

Antioxidant properties of leaves, pericarps and pulps of the three Garcinia species were evaluated by determination of TPC, TAC, FRS, FRP and FIC.

Results are expressed as means ± SD (n = 3). For each column, values followed by the same letter (a-c) are statistically insignificant (P > 0.05), as determined using ANOVA, and this does not apply for different plant parts ‘ND’ represents ‘not detected’ 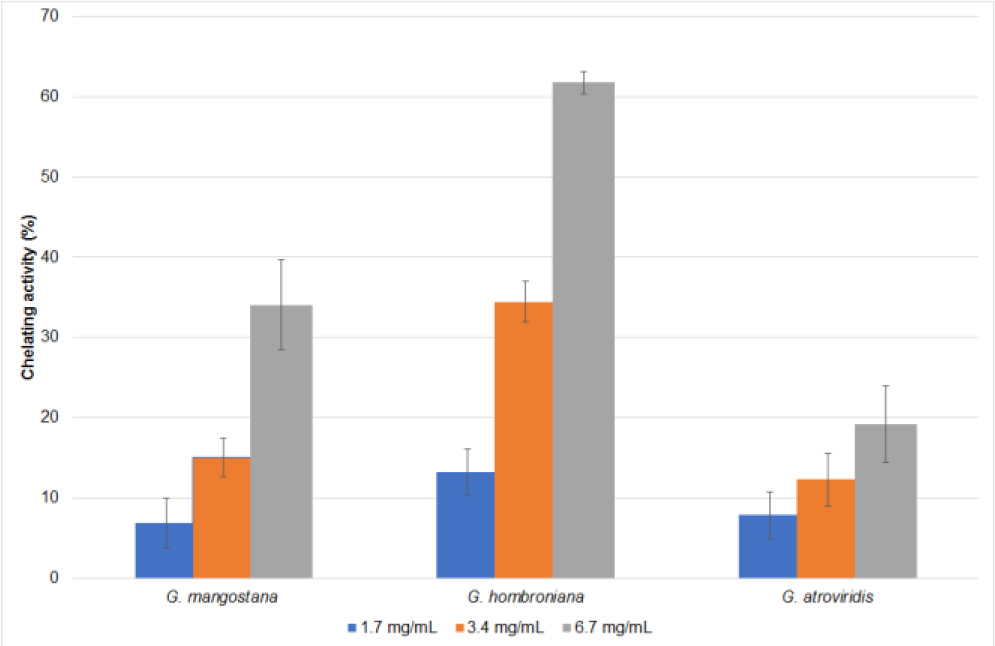 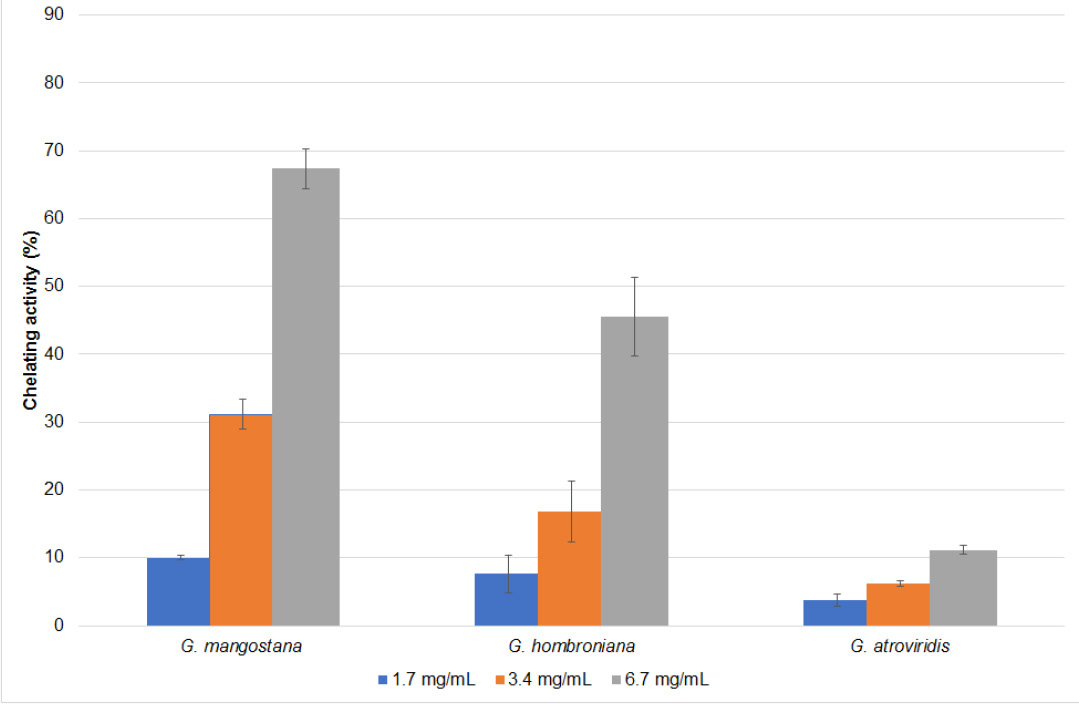 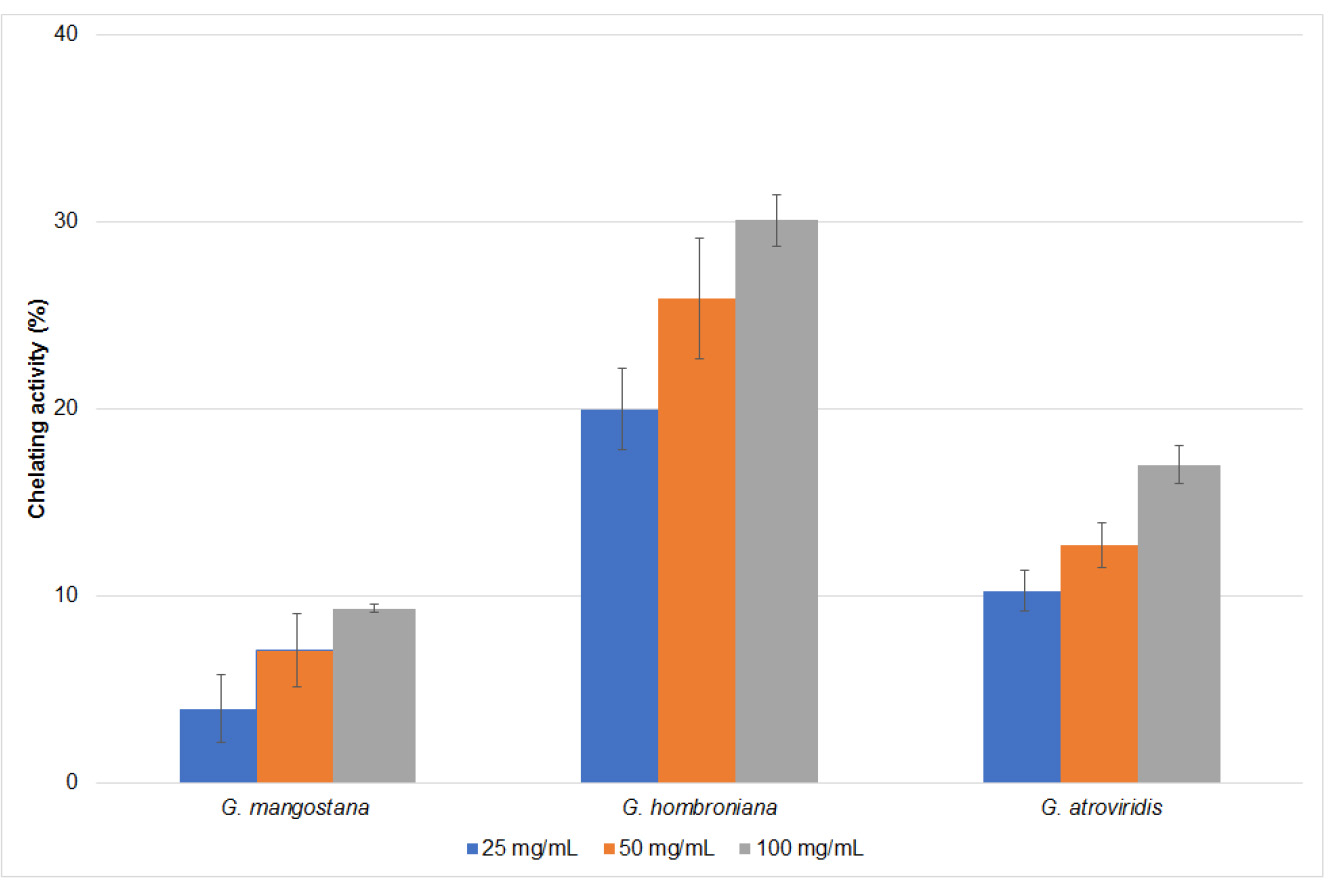 High amount of TPC was observed in leaves and pericarps of G. mangostana and G. hombroniana (> 1000 mg GAE/100 g). Pulps for the three species were found to be relatively low compared to leaves and pericarps. When compared to other Malaysian fruits, G. hombroniana pulp is similar to guava (138 – 179 mg GAE/100 g) while G. atroviridis is similar to star fruit (131 mg GAE/100 g), but it is higher than orange.9 Xanthones are present in G. mangostana, G. hombroniana and other Garcinia species. Numerous benzophenones, flavonoids and benzoic acid derivatives were isolated from G. hombroniana,13-14 would correspond positively in the assay. To date, there are more than fifty xanthones isolated from G. mangostana15-16 and thirteen xanthones have been isolated from G. hombroniana.13-14,17-19 Xanthones have been widely reported to exhibit diverse pharmacological activities, such as antioxidant, antifungal, antibacterial, anti-inflammatory, antihistamine and antiviral activities.15,20 Antioxidative properties exhibited by xanthones, benzophenones and flavonoids would correspond to the high FRS and FRP in G. mangostana and G. hombroniana. Xanthones could scavenge free radicals by transferring labile H-atoms to radicals. The number and location of the hydroxyl group in xanthones could exhibit varying degree of FRS activity. Xanthones with dihydroxyl groups in the B-ring, such as γ-mangostin and garcinone E found in G. mangostana were potent free radical scavengers. If the hydroxyl groups in xanthones were protected or shielded, the FRS activity exhibited would be lower.21 This was noticed in the reported FRS activity of α-mangostin, β-mangostin and 9- hydroxycalabaxanthone.21

Our previous studies have shown that TPC, FRS and FRP correlated positively with each other.10-11,22-23 The positive correlation was also noticed in this study. Significant correlation between TPC and FRS was shown using Pearson correlation analysis.24 However, there was slight variation in the relationship between TPC, FRS, and FRP with FIC activities, as reported in malting barley25 and seaweed.24 G. hombroniana exhibited the strongest chelating activity, followed by G. mangostana and G. atroviridis. Although G. mangostana leaves exhibited the stronger antioxidant activities (TPC, FRS and FRP) than G. hombroniana leaves, its FIC activity was significantly lower than G. hombroniana leaves. The iron binding ability of compounds was related to the presence of certain functional groups.26 For instance, hydroxamate compounds, i.e. desferroxamine B and benzohydroxamic acid are good iron chelators, while catecholate chelators, such as caffeic acid, 2, 3-dihydroxybenzoic acid exhibited weaker iron binding ability. The authors also discovered that the FRS activity of the compounds did not correlate with their iron chelating ability. This was explained that the three bidentate ligand structure of desferroxamine B is crucial in iron binding. Roosenberg, Lin27 discovered that compounds with siderophores and three bidentate ligands inside their structure are most effective in forming hexadentate complexes with smaller entropic variations which are caused by chelating one ferric ion with separate ligands. No correlation was noticed between TPC and FIC in the principal component analysis (PCA) reported as not all phenolic compounds were effective metal chelators.24

Although the occurrence of xanthones, benzophenones and biflavonoids is common in the Garcinia genus, exception is noticed in G. atroviridis. To date, only atroviridin, garcinia acids, i.e. HCA, 2- (butoxycarbonylmethyl)-3-butoxycarbonyl-2-hydroxy-3-propanolide, 1ʹ,1ʹʹ-dibutyl methyl-hydroxycitrate and its γ-lactone have been reported in G. atroviridis29 HCA was proven to be effective in the treatment of obesity. It inhibits lipogenesis, lowers cholesterol and fats, increases glycogen production in the liver, suppresses appetite, and increases the thermogenesis process. These series of metabolic changes would thereby promote weight reduction by decreasing the conversion rate of carbohydrates to fats. HCA exhibited antioxidative properties by increasing the level of non-enzymatic and enzymatic antioxidants and reduction in lipid peroxidation product, malondialdehyde in HCA treated non-alcoholic steatohepatitis induced rats.30

In conclusion, our findings showed that Garcinia species, especially leaves and pericarps of G. mangostana and G. hombroniana have very great potential to be developed into nutraceutical products since they are very high in antioxidant activities. This study has identified new sustainable source of antioxidative agents. The extracts of Garcinia samples could be partially purified, and the fractions should be explored further to discover their potential to be used as alternative treatments for diseases which were related to oxidative stress.

The authors are thankful to Monash University Sunway Campus for financial support. The authors wish to thank Mrs. Angela Hijjas from Rimbun Dahan Arts Centre at Kuang, Selangor for supplying the Garcinia samples.

The authors declare that they have no conflict of interests.

Difference if absorbance between pH 1.0 and 4.5

Absorbance of the control

Absorbance of the extract

Concentration of extract required to reduce the absorbance by 50% 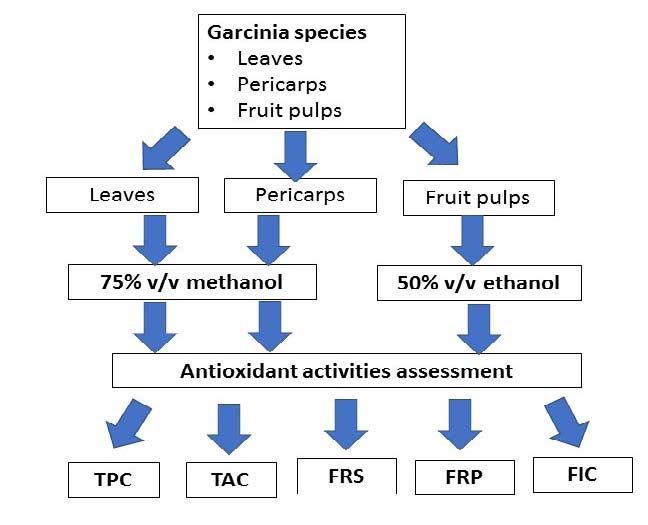 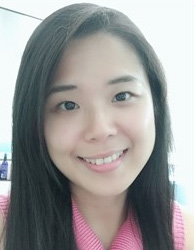 Dr Yik Ling Chew obtained her PhD from Monash University, Australia in 2011. Currently she is an Assistant Professor in Faculty of Pharmaceutical Sciences, UCSI University Kuala Lumpur, Malaysia. Her research specialisations include natural products chemistry and, various biological activities of tropical plants, including anticancer, antimicrobial, antioxidants. She has published research and review articles in renowned journals and presented her work in both national and international conferences. 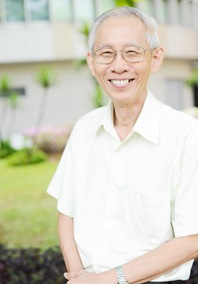 Dr Yau Yan Lim is an Associate Professor in School of Science, Monash University Malaysia, teaching Inorganic, Chemistry, Medicinal chemistry and Analytical Chemistry/Spectroscopy at all year levels. He leads a successful research team consisting of several postgraduate and undergraduate students. He is an elected Fellow of the Malaysian Academy of Sciences based on his significant contributions to chemical research and chemistry education.