To characterize clinical profile and assess adherence to guidelines in stroke prevention in AF in north Indian population.

It was a single centre observational study. All patients presenting to outpatient department or admitted in cardiology wards from May 2014 to April 2016 with AF were included. Detailed history, examination and relevant investigations were carried out .CHADS2 score was used for risk stratifying and prescribing oral anticoagulants in nonvalvular AF. The effectiveness of oral anticoagulant was assessed by INR.

Discordance between guidelines and practice was found regarding prescription of OACs and maintenance of optimal anticoagulation for stroke prevention in our population. Optimal anticoagulation needs to be emphasized on both patients as well as physicians to prevent strokes and achieve better outcomes.

Atrial fibrillation (AF) is the most common cardiac rhythm disturbance associated with frequent emergency department visits, hospitalizations, morbidity, mortality and serious economic consequences.1 The prevalence of AF is estimated at 1-2% in general population increasing with age2,3 and as many as 9% of people older than 80 years are affected. AF accounts for 34.5% of patients hospitalized with a cardiac rhythm disturbances.4 The age adjusted prevalence is higher in men.5 The total mortality rate is approximately double in patients with AF compared with patients with normal sinus rhythm and is linked to the severity of underlying heart disease.6 The risk of ischemic stroke among patients with non-rheumatic AF averages 5 % per year which is 2 to 7 times more than in people without AF. One out of six strokes occurs in patients with AF.7 Prevention of thromboembolism is the main tenet of AF management and should begin with individual risk assessment of each patient. Chronic oral anticoagulation is currently the most effective therapy for attenuating the risk of stroke associated with atrial fibrillation Studies have shown that even in developed countries suboptimal anticoagulation is frequently observed8,9,10,11 and adherence to guidelines12 for prevention of stroke is poor. There is hardly any data from our regional population which has addressed this problem. There is very little Indian data .Small studies like CRAFT13 from India have focused on treatment of Rheumatic AF only. This study was designed to meet this unmet need to assess to what extent our AF population is being prescribed appropriate stroke preventive measures and how successfully the present guidelines are being applied in this context.

All patients with atrial fibrillation presenting to outpatient department or admitted in cardiology or medical wards of the Sher-I-Kashmir Institute of Medical Sciences, Soura from May 2014 to April 2016 for period of two years patients were studied. Work up of the patients included detailed medical history with particular emphasis on possible etiological factors like hypertension, coronary artery disease (CAD), valvular heart disease, cardiomyopathy, chronic obstructive pulmonary disease(COPD), thyroid disease etc. Detailed drug history especially the use of anti-arrhythmic, anti-platelets, anticoagulant, and the frequency of prescription compliance was obtained from all patients. Physical examination included assessment of pulse, heart rate, blood pressure, evidence of heart failure such as raised JVP, pedal oedema, S3, crepts, hepatomegaly and cardiac murmurs. Investigative work up constituted estimation of blood sugar, lipid profile, blood urea, serum creatinine, thyroid function, ECG, chest X-ray 24hrs Holter recording and echocardiography. Patients presenting for the first time with new onset atrial fibrillation were reassessed on follow up for categorization of atrial fibrillation. Patients with non-valvular atrial fibrillation were stratified for need of oral anticoagulation to prevent thrombo-embolic phenomenon by CHADS2 score. For compliance of treatment and anticoagulated state, International normalized ratio (INR) was taken into account. Guideline adherence was based on compliance with anti-thrombotic recommendations for AF stroke prevention according to the CHADS2 score. Guideline-adherent was defined as the following: (1) For AF patients with a CHADS2 score of 0 no anti-thrombotic drug was necessary. (2) For AF patients with CHADS2 of 1 only aspirin was necessary. (3) For those with CHADS2 with score of more than or equal to 2, OACs was necessary.

Continuous variables were expressed as mean± standard deviation and categorical variables as percentages. Differences in continuous variables between the two groups were evaluated with unpaired t test and differences in categorical variable, were evaluated using Fisher’s exact test. A p-value of less than 0.05 was considered as statistically significant. Data analysis was done using SPSS 20 version software. 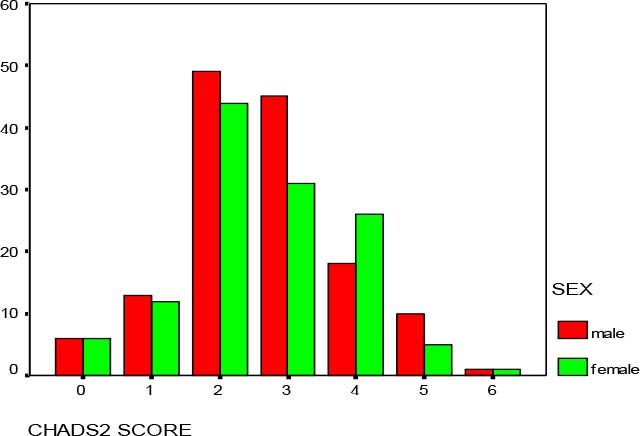 The present study is the first prospective study assessing clinical profile of the patients with AF and adherence to guidelines for stroke prevention in our region. We noted that females formed 52% of AF cohort which is in accordance with, (56.4% females )14 and (51.04% females).15 However in various other studies prevalence of AF was higher in males.16,17 Mean age of our patient population was 60.83±16.86 years. Males were significantly older than females (62.84±17.84 vs 58.97±15.71 p=0.015). Mean age of presentation of AF was higher in our population as compared to in various other studies but is comparable with (69.8±11.8 years)17 and (65 years).18

In our study 403 (90.35%) out of 446 patients had underlying cardiac disorder. Valvular heart disease (40.1%) including both rheumatic (37.2%) as well as non-rheumatic(2.9%) was the most common etiological factor in our patient population followed by hypertensive cardiovascular disease (HTCVD) (18.1%), coronary artery disease (CAD) (15.9%), dilated cardiomyopathy (DCM) (12.8%) and Idiopathic (lone AF) accounted for 5.4% . Our study is in contrast to various studies16,17,20 in which HTCVD is the most common etiology and rheumatic valvular disease comes much lower down. This reflects the increased prevalence of RHD in our population. Similar results were found in a study done in rural Bihar in which RHD accounted for 51.5% of patient.

Out of 446, 409 (91.7%) patients in our study population had indication for receiving OAC (oral anticoagulation) while 37 (8.3%) patients did not have indication for OAC according to current guidelines. The rate of prescription (71.9%) of OAC to our patients was considerably higher in our study as compared to other studies.14,15,16 However it was more in agreement with 67% 18 and 60% 23 In a study by,17 among patients with an indication for OAC, 88% (403/458) effectively received it.17 This study had one of highest rate of OAC prescriptions. A higher and good rate of OAC prescription in our study population may be due to the fact that in our hospital all AF patients are followed and treated by experienced cardiologists.

We also found that our OAC prescription decreased as age increased. The rates of OAC prescription in our patients in age group, ≤65, 66-75, >75 years were 84.4%, 65% and 60.2% respectively which was in stark contrast to study done by Meiltz et al in which the rate increased from 72% in ≤65 years group to 87% in >75 years group. However, this negative effect of age on rate of OAC prescription has been seen in many other studies by.23,24,25 The fact of the matter is that chances of stroke increase with increasing age and it is this population of elderly people who derive the maximum benefits of stroke prevention with OAC. However, the results of our and various other studies reflect the mindset and fear of bleeding in elderly which needs to be corrected to pass on the full benefits to this high risk group of patients. We also found that OAC prescription was significantly higher in valvular vs. non valvular AF (p=0.0001).This may reflect poor application of CHADS2 score in risk stratifying patients by the treating physicians.

In our study a total of 306 patients (of which 16 patients were not actually eligible) received OAC. Out of 306 patients who received OAC, 61.4% patients were found to be inadequately anticoagulated whereas 35.6% were optimally anticoagulated, rest of the patients were over anticoagulated. We noted that overall only one fourth (24.9%, 102/409) of our population were optimally anticoagulated various large randomized trials have evaluated the status of anticoagulant therapy in their patient population. In SPAF III, SPORTIF III, SPORTIF V, ACTIVE W trials only 61%, 66%, 68%, 69% patients respectively had INR in therapeutic range.26,27,28,29 These rates are higher than what we have observed in our study. The above mentioned studies were randomized trials in which lot of attention and close follow up is given to patients and despite that optimal anticoagulation was seen in 60-69% patients. The various reasons of suboptimal anticoagulation in our patients could be lack of proper education, awareness among our patients as well as economic reasons for regular monitoring of INR.

This study was a single center observational study with small sample size so extrapolation of these results to general population requires further validation from prospective multicenter studies.

Discordance between guidelines and practice was found regarding prescription of OACs and maintenance of optimal anticoagulation for stroke prevention in our population. Optimal anticoagulation needs to be emphasized on both patients as well as physicians to prevent strokes and achieve better outcomes.

Bradley BC, Perdue KS, Tisdel KA, Gilligan DM , authors. Frequency of anticoagulation for atrial fibrillation and reasons for its non-use at a Veterans Affairs Medical Center. Am J Cardiol. 2000;85(5):568–72

2014 AHA/ACC/HRS Guideline for the Management of Patients With Atrial Fibrillation A Report of the American College of Cardiology/American Heart Association Task Force on Practice Guidelines and the Heart Rhythm Society , author. Circulation. 2014;64(21):e1–76

The ACTIVE Writing Group on behalf of the ACTIVE Investigators. , author. Clopi-dogrel plus aspirin versus oral anticoagulation for atrial fibrillation in the atrial fibrillation clopidogrel trial with irbesartan for prevention of vascular events (ACTIVE W): a randomised controlled trial. Lancet. 2006;367:1903–12

Journal:
Journal of Cardiovascular Disease Research
‹ Breast Cancer and the Heart: Burden on the Chest up Association between Myocardial Infarction and Dermatoglyphics: A Cross-Sectional Study ›