During period from December 2016 to June 2017, 60 patients with STEMI were randomly assigned to undergo either primary PCI (Group I) or immediate fibrinolysis (Group II) with subsequent coronary angiography with PCI within 3 to 24 hr later. The primary end point was a composite of all-cause death, re-infarction, and target-vessel revascularization, re-hospitalization for cardiac reasons, any stroke and major bleeding up to 30 days.

Primary percutaneous coronary intervention (PPCI) is the preferred reperfusion strategy in patients presenting with ST-segment elevation myocardial infarction (STEMI).1 Because most STEMI patients initially present to hospitals without PCI capabilities, performing a PPCI in a timely fashion poses a significant logistic challenge in many healthcare systems across the world. Despite efforts to decrease transfer times, PCI related system delays remain substantial in many countries especially those economically burdened including Egypt.2

Unfortunately, these delays clearly have an unfavorable impact on morbidity and mortality,3 therefore early fibrinolysis followed by timely angiography often provides a faster reperfusion option in many patients than transfer for standard primary PCI.4

In light of encouraging results of trials comparing these 2 management strategies for STEMI which could give those patients more flexible options for emergent reperfusion, we think that it may be of considerable interest to conduct a similar work at our institution.

This prospective, randomized, parallel group, single center clinical study included 60 consecutive patients with STEMI who were admitted to the coronary care unit (CCU) at Benha University Hospital, Egypt in the period from December 2016 to June 2017. All patients were candidates for reperfusion therapy. We aimed primarily to compare in-hospital and short term outcome of primary PCI versus Pharmaco-invasive strategy (immediate fibrinolysis then coronary angiography with possible PCI within 3-24 hr later) for reperfusion in eligible patients with STEMI. Our institutional review board and ethics committee approved the performance of this research, and all patients signed a written informed consent. Key inclusion criteria were: patients of both genders aged 18 years or older with chest pain lasting more than 30 min, ST segment elevation in 2 contiguous leads of at least 1 mm except ≥ 2 mm in V2-3 or presumed new onset left bundle branch block (LBBB). Successful reperfusion after thrombolytic therapy in patients who underwent pharmaco-invasive strategy including: at least 50 % ST segment resolution in the lead with maximum elevation in baseline ECG, improvement of chest pain. While key exclusion criteria were: absolute contraindications for thrombolytic therapy, evidence of mechanical complications of MI including cardiogenic shock, non-cardiac condition limiting life expectance to less than 6 months, evidence of pre-existing multi-vessel disease not amenable for revascularization, evidence of pre-existing more than stage 2 chronic kidney disease (CKD) defined as creatinine clearance less than 60 ml/Kg/min, evidence of pre-existing peripheral vascular disease precluding rapid emergent vascular access, and patient refusal to give consent.

Streptokinase was the fibrinolytic agent used in those scheduled for pharmaco-invasive strategy and was given in the standard dosing regimen (1.5 million unites infused over 60 min) and was combined with low molecular weight enoxaparin (30-mg intravenous bolus followed by subcutaneous injection of 1 mg per kilogram of body weight [0.75 mg per kilogram for patients ≥75 years of age] every 12 hr) except for patients 75 years of age or older, in whom the intravenous bolus was omitted. In patients who were scheduled for PPCI; clopidogrel in a 600-mg loading dose (300mg for patients ≥75 years of age) followed by 150 mg daily for one week, then 75mg daily for one year. In those scheduled for pharmaco-invasive strategy, clopidogrel in a loading dose 300 mg was given followed by 75 mg daily. Aspirin (150 to 325 mg) immediately followed by 75 mg daily was applied in all patients. Beta blockers and ACEIs were given to all patients.

Un-fractionated heparin (UFH) of 10000 units’ bolus dose was given after sheath insertion. The procedure was done according to the standard technique for coronary angiography and PCI. Trans femoral approach was done in all patients using 6 Fr sheaths. Diagnostic coronary angiography was done to explore non-infarct related artery. XB or Judkin left guide catheters were used for lesions in the left system, while Judkin right catheters for lesions in right coronary artery (RCA). Thrombus aspiration and glycoproteins inhibitors (Eptifibatide or Tirofiban intracoronary bolus followed by intravenous infusion for 12 hr) were used in lesions with heavy thrombus burden and or impaired TIMI flow after the procedure. The operator determined the length and diameter of implanted stents. Sheaths were removed 4 hr post procedure.

After initial presentation and full clinical assessment, eligible patients were randomly allocated using simple 1:1 randomization into one of 2 groups based on the reperfusion strategy: 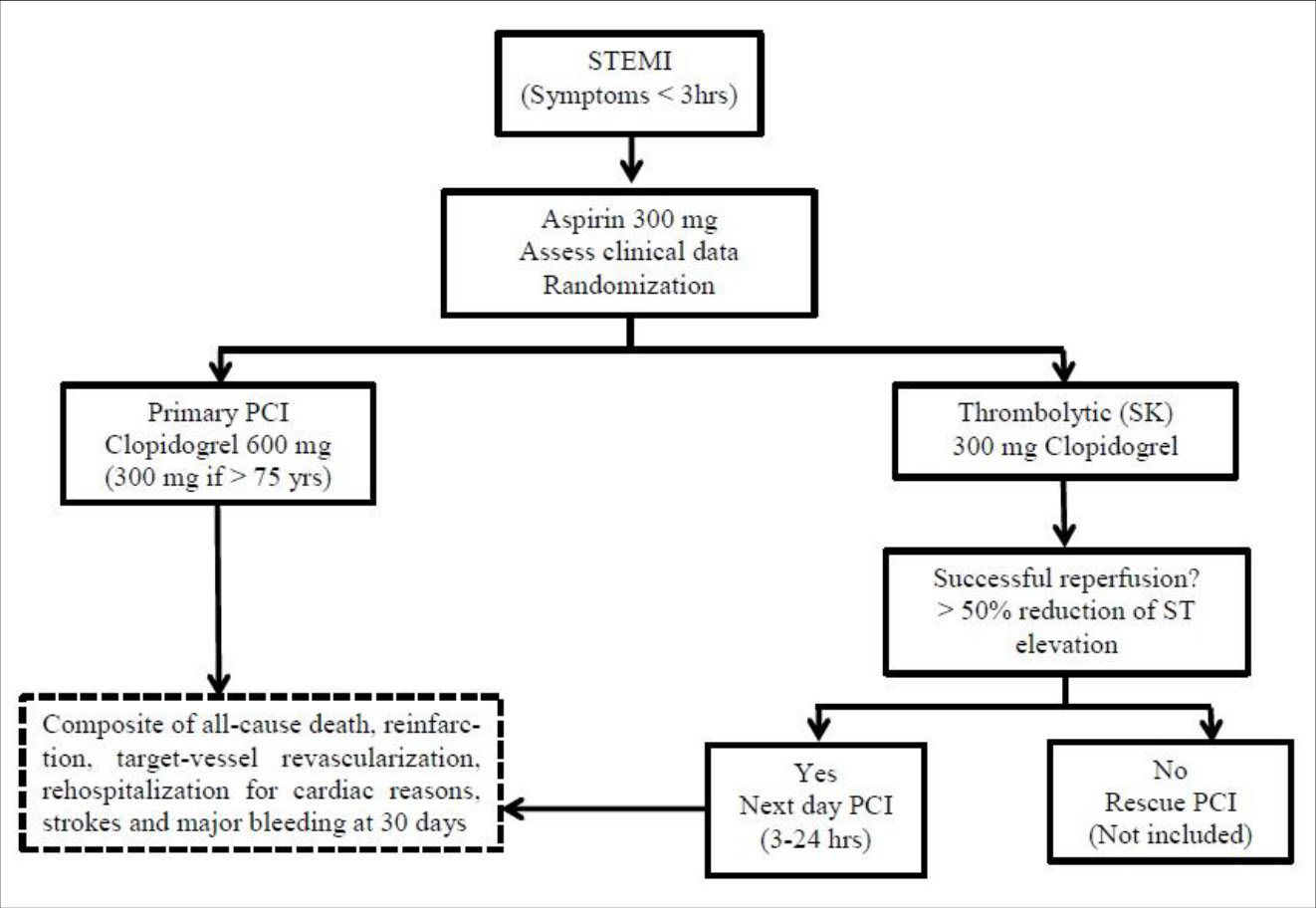 The endpoint of the study was a 30-days composite of all-cause death, re-infarction, target-vessel revascularization, re-hospitalization for cardiac reasons, any stroke and major bleeding.

Data management and statistical analysis were done using SPSS software version 23. Numerical data was summarized as mean and standard deviation or median and range. Categorical data was summarized as numbers and percentages. Comparisons between the 2 groups as regard numerical variables were done using independent t test. For paired data, Wilcoxon signed rank test was used. For categorical data, comparisons between both groups were done using chi-square test or Fisher exact test whenever appropriate. Log rank test was used to compare Kaplan-Meier curves for each group. All P values were two-sided. P value less than 0.05 is considered statistically significant.

The mean age was 52.3±10.1 years (51.7 ±10.1, 52.9 ±1.6 years in group I and group II respectively, P= 0.63). Seventy eight percent were males, 32% had history of DM, 30% were hypertensives, 68% were smokers, 13% were obese, 11% had known dyslipidemia, 8% had family history of premature CAD, 20% had past history of diagnosed CAD and 16% had prior coronary interventions. Between groups analysis did not reveal statistically significant difference in these baseline clinical characteristics. (Table 1)

Location of STEMI in both groups. 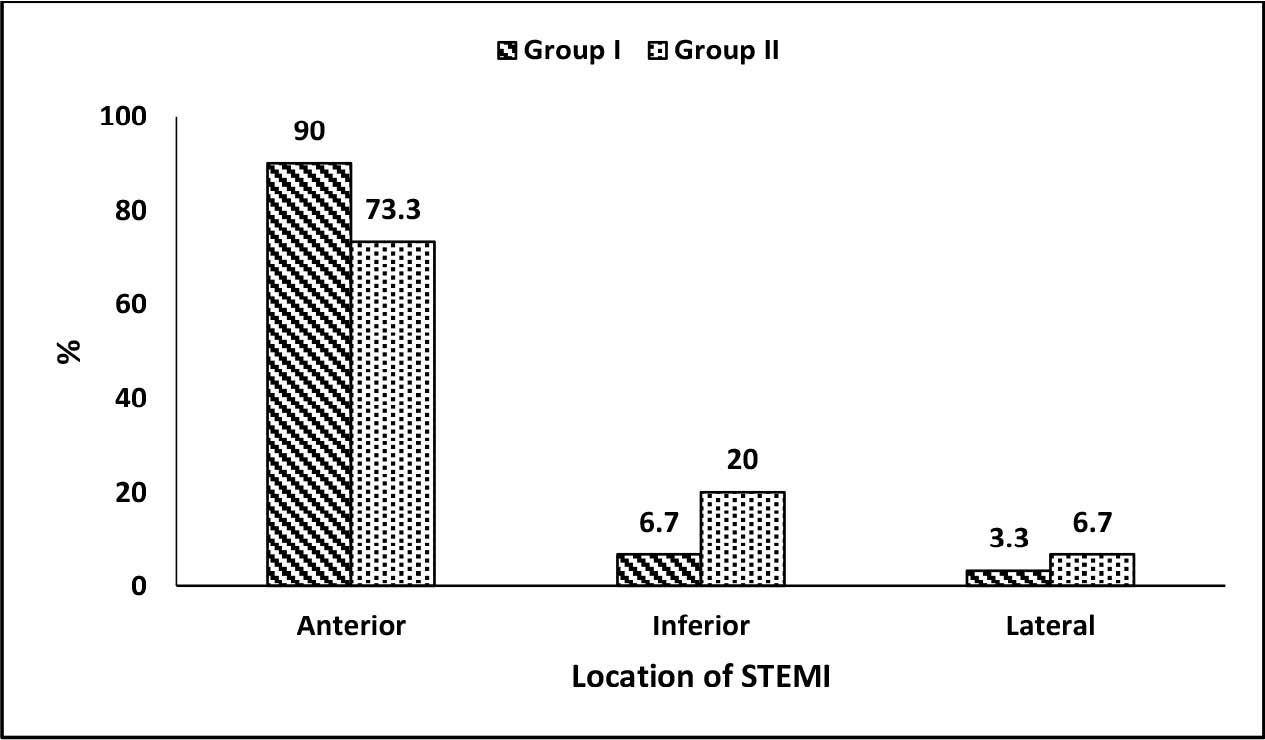 Of note, significantly more open vessels with TIMI-3 flow were found on first angiography before PCI in group II than in the group I.

Kaplan-Meier curves for the primary endpoint. 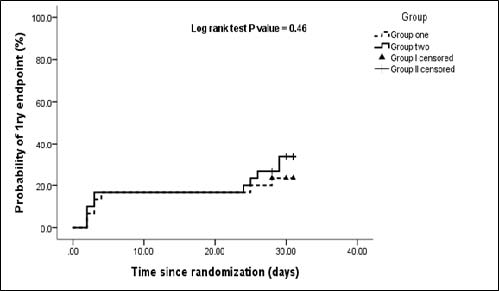 All individual components of the primary endpoint (except reinfarction) occurred more frequently in group II than group I but did not reach statistical significance. (Table 2).

Components of primary endpoint at 30-days

In this study, similar clinical outcome was reported when comparing primary PCI and pharmaco-invasive strategy in patients with STEMI who were eligible for reperfusion.

This is reassuring, and provides some flexible options for emergent reperfusion for patients with STEMI who could not attain the guideline-recommended time frames for reperfusion due to local factors causing time delay which are very common in an economically burdened country like Egypt.

It is first useful and noteworthy to emphasize that findings of the present study should not be confused with the Assessment of the Safety and Efficacy of a New Treatment Strategy with Percutaneous Coronary Intervention (ASSENT-4 PCI) trial, which evaluated another fibrinolysis-based strategy for reperfusion i.e. facilitated PCI versus primary PCI. That study was prematurely terminated due to excess of strokes and early thrombotic complications when mandatory routine PCI within 1 to 3 hr after fibrinolysis was performed, regardless of evidence of successful reperfusion.8 Our study was not designed to evaluate the facilitated strategy (that has been discouraged in recent guidelines)1 and moreover, unlike the use of adjunctive therapies in our study, which were specified in the protocol, suboptimal use of adjunctive antithrombotic agents were reported in the ASSENT-4 PCI trial.

Our findings are supported by other trials in which lytic therapy was administered very early after symptom onset9 and was combined with frequent additional revascularization.10

All authors disclose no conflicts of interest.

Authors would like to thank Dr. Mohamed Bendary for his great contribution to data analysis and all staff workers of coronary care unite at Benha University Hospital for their support.

It’s well known that PPCI is by far the best treatment option for patients with STEMI. Time delays remain a major obstacle for timely PPCI in economically burdened countries. Equivalency of early post-thrombolysis PCI to standard PPCI after STEMI has been demonstrated in many RCTs. This study reconfirms this fact and adds to the accumulating body of evidence supporting this approach giving those critically ill patients more flexible options for emergent reperfusion.

Francisco Fdez-Aviles: ‘GRACIA-4 (and Pooled Analysis): A Prospective, Randomized Trial of Percutaneous Coronary Intervention in Patients with STEMI with and without Preceding Fibrinolytic Therapy’ , author. https://www.tctmd.com/slide/gracia-4-and-pooled-analysis-prospective-randomized-trial-percutaneous-coronary-intervention8–July. 2017

Journal:
Journal of Cardiovascular Disease Research
‹ Probability of Dying and Survival Analysis of Diabetic and/Hypertensive Patients who Undergone Hemodialysis with Heart Disease Complication: A Comparison between a Hemodialysis Center Jakarta, Indonesia and Penang, Malaysia up Assessment of Risk Factors for the Cardiovascular Diseases in People Visiting a Tertiary Care Hospital for Routine Medical Check-Up ›