Prospective observational study conducted in a tertiary care hospital in Bangalore over 6 months. Subjects between 30-89 years of age visiting in and out-patient department of St. Philomena’s Hospital, Bangalore were enrolled in the study. Subjects with diabetes mellitus, hypothyroidism and who were on anti-hyper lipidemic agents were excluded. 92 subjects (44 male and 48 female) were included in the study, among whom 48 (52.2%) were in the age group of 50-69 years. Abnormal total cholesterol and Low Density Lipoproteins were found more in male subjects and abnormal High Density Lipoproteins and triglycerides were found predominantly high in female subjects. Approximately 62% of study participant were obese and overweight, only 34 out of 92 participants were doing physical activity, nearly 91.3% were belonged to lower socioeconomic class and among male participants 32 of them were current smoker. The result indicated that as the age increases, the risk of CVD raises.

Our study showed that the common risk factors among our subjects without comorbidity were age, obesity and over-weight, dyslipidemia, physical inactivity, low socioeconomic status and smoking.

With the turn of the century, cardiovascular diseases (CVDs) have become the single largest causes of disability and deaths in developing countries such as India.1 Global status report on Non-Communicable Diseases (NCD) in 2014 highlights that 70% of deaths globally are due to NCDs and among them CVD contribute 44.25%.2

According to the Global Burden of Disease study age-standardized estimates (2010), nearly a quarter (24.8%) of all deaths in India are attributable to CVDs.3 Behavioural and metabolic risk factors such as physical inactivity, overweight/obesity and dyslipidemia along with low socioeconomic class are some of the most important modifiable risk factors.2 Prevalence of risk factors varies in different regions in India for instance prevalence of obesity and overweight was the higher in southern and northern and the lowest in central India.4

Being one of the nation with a large number of young people in the world, India is set to lose its productive population to CVD morbidity and mortality.5 which is the first among top five causes of deaths in Indian population.6 Dyslipidemia is one of the key modifiable risk factors that attributes to CVD, when Indians’ fat intake increased from 24 to 36 g/d and from 36 to 50 g/d in individuals in rural and urban areas, respectively.7 Partially hydrogenated vegetable oils with high trans-fat content contribute to a significant proportion of total fat intake in Indians, and the consumption of partially hydrogenated vegetable oil is particularly common in urban adult slum dwellers belonging to the lowest socioeconomic status (SES).8,9

The Indian Council of Medical Research-India Diabetes study (ICMRINDIAB) study assessed physical activity using the Global Physical Activity Questionnaire which showed that one in every 2 individuals was considered physically inactive. In addition, <10% of the studied population engaged in recreational physical activity and physical inactivity was higher in urban areas, for women.10

The aim of this study was to determine the risk parameters of healthy individuals such as age, BMI, dyslipidemia, physical inactivity, low socioeconomic class and smoking, in the study population.

Prior approval was obtained from the Institutional Ethical Committee of hospital and written informed consent form was taken from each participant before enrolled them in the study. This prospective observational study was conducted in a tertiary care hospital in Bangalore. Study consisted of 92 volunteers, who attended the outpatient and inpatient of St. Philomena’s hospital for various conditions. Patients of age 30 years and above were included in the study and patients with pre-existing CVD, DM, hypertension and hypothyroidism were excluded.

Along with demographic details, objective anthropometric measurements like height, weight, Body Mass Index, blood pressure (BP), and biochemical details [lipid profile - triglycerides (TG), High density lipoproteins (HDL), Low density lipoproteins(LDL), Cholesterol], Physical activity, socioeconomic status (SES) and smoking were recorded in the out-patient and inpatient department according to standard prescribed guidelines. For calculating the risk of CVD, various assessment methods were available but our study used Joint British Societies for the prevention of cardiovascular diseases (JBS3) method which is suitable for Indian population.11 BMI classified based on World Health Organisation (WHO).12 Lipid profile according to National Cholesterol Education Program Adult Treatment Panel III (NCEP-ATP III) guideline.13 andthe modified Kuppuswamy scale was used to measure SES in urban communities. The Kuppuswamy scale was devised by Kuppuswamy in 1976 and is based on a composite score considering the education and occupation of the head of the family along with monthly income of the family, which yields a score of 3-29. This scale classifies the study populations into high, middle, and low SES.14

Collected information was analysed using Microsoft Office (MS-Word and Excel) 2016. Descriptive data analysis was performed in the form of percentage of demographic variables.

This Figure showed the abnormal Total cholesterol and Triglyceride level in male and female study subjects. 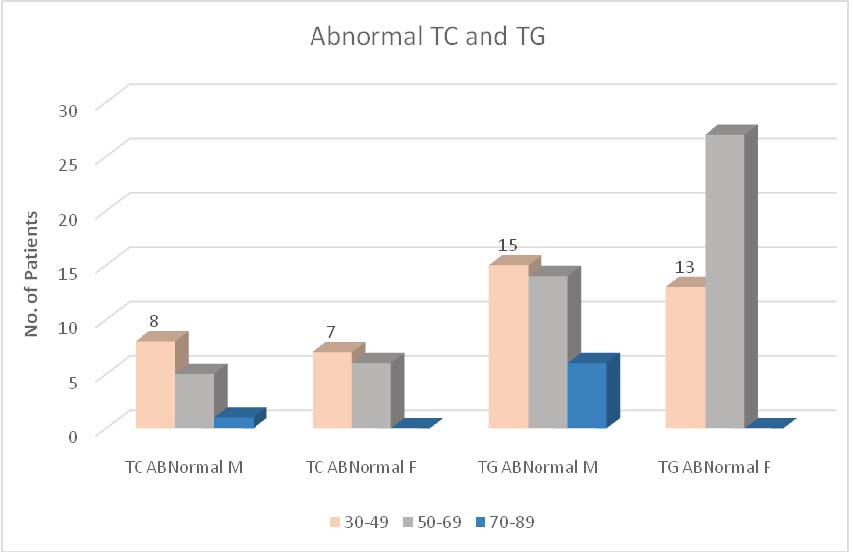 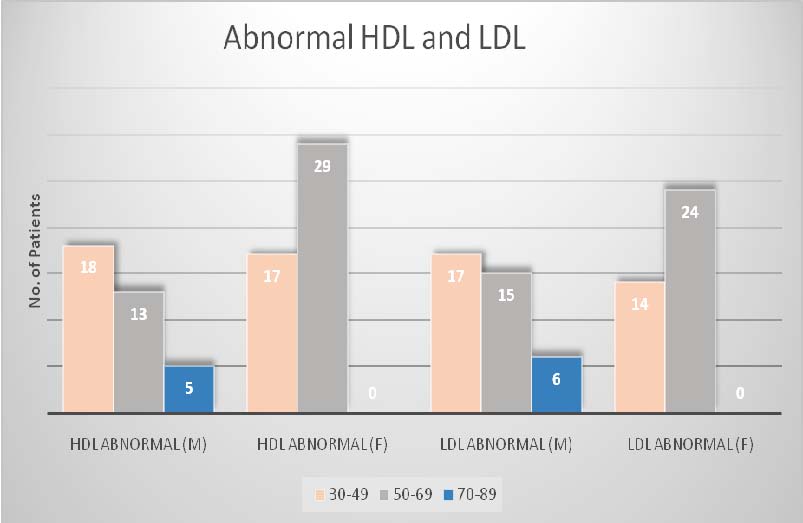 This study investigated the common risk factors for CVD among healthy individuals without co-morbidities. A study by Sawant (2008) indicated that the increased prevalence of dyslipidemia was high among age group 31 to 40 years in men in Mumbai, India, suggesting that this class is at increased risk of developing coronary artery disease leading to young people developing infarcts whereas in our study age group of 70-89(29.3%) followed by 50-69(11.3%) and finally 30-49(2.21) were at risk of developing cardiovascular problem, therefore the result showed as the age is increasing risk of CVD is also proportionally increasing (Figure 3).15

This Figure showed as the age is increasing the risk of cardiovascular diseases also increased proportionally. 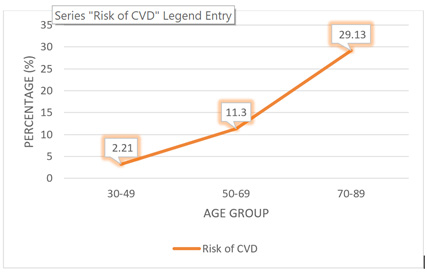 Globally obesity rates have more than doubled since 1980 from 5% to 10% in men and 8% to 14% in women. Based on the data published in WHO in the South-East Asia Region, 300,000 dies of overweight/obesity. Our study results also support the high prevalence of over-weight and obesity in female than in male respectively. (59.37% vs 40.62%, 60% vs 40%). Over-weight and obesity is preventable through educational interventions among other aspects such as policy changes that facilitates access to nutritious food.12

This table demonstrate the dyslipidemia as per Age and Gender.

Compared with the western populations, Indians tend to have higher TG levels and lower HDL-C levels but the total cholesterol and LDL-C levels are generally lower, similar to this study, in case of TG and total cholesterol. Serial epidemiological studies in India suggest a rapid rise in the mean levels of LDL-C and TG, and our study also showed the mean of 129%, 185.1% respectively which were high based on NCEP-ATP III guideline. Based on the various studies across India, range of hypercholesterolemia was found between 20-35% but our study showed 10.4%, which was lower than the range described (Table 2).

In a study carried out by Karpov.Y et al in 2015 in Russia, rate of hypertriglyceridemia was 29.2 %.18 Globally, around 23% of adults aged 18 and over were not active enough in 2010 (men 20% and women 27%). There is enough evidence that physical inactivity is an important risk factor for development of CAD, obesity, dyslipidemia.19,20,21,22 Physical activity is associated with reduction in risk for CAD and obesity. In India, a large percentage (392 million) of the people are physically inactive23 and our study also indicated that majority of patients were having sedentary life style (58 out of 92), and females [65.51%] were physically more inactive than males [34.49%]. Lower socioeconomic status (SES), whether assessed by income, education, or occupation, is linked to a wide range of health problems.24 Lower SES is associated with higher mortality, and the greatest disparities occur in middle adulthood (ages 45–65).25 Education improves the cognitive skills and assists in navigating the health care system and enhanced self-care.26 Adults with a higher education—especially in today’s knowledge economy—have conspicuous advantages in gaining employment and finding desirable jobs. Advanced degrees give workers not only high salary and job satisfaction but also health benefits.27-29 In our results, also 91.3% of participants belonged to lower socioeconomic class.

The present study reveals that with the progression of age, the risk of heart attack increased in most our study population. Approximately 62% of study subjects were overweight/obese. Abnormal HDL level was 31.5% followed by LDL 29.2%, triglyceride 28.8% and total cholesterol 10.4%. 63% of participant had sedentary life style. 91.3% of study subjects were belongs to lower socioeconomic class. 72.72% of male participant were current smoker. Therefore, we enumerate the risk factors of CVD in our study participants as

Joint British Societies recommendations on the prevention of cardiovascular diseases

Cardiovascular diseases have become the single leading cause of death and disease burden in India. The relatively early onset age of cardiovascular diseases in India in com-parison to Western countries also implies that most productive ages of the patient’s life are lost fighting the disease. Deaths associated with cardiovascular events remains constant in many countries due to new therapeutic approaches for prevention and treatment of cardiovascular diseases. This condition is widely attributable to unhealthy outcomes in its association with risk factors such as age, obesity, dyslipidemia, smoking, low socioeconomic state and sedentary lifestyle which play a significant role in the progression of cardiovascular diseases. The methodology used in the study was prospective observational study conducted in a tertiary care hospital in Bangalore over 6 months. Subjects between 30-89 years of age visiting in and out-patient department of St. Philomena’s Hospital, Bangalore were enrolled in the study. Subjects with diabetes mellitus, hypothyroidism and who were on anti-hyper lipidemic agents were excluded. 92 subjects (44 male and 48 female) were included in the study, among whom 48(52.2%) were in the age group of 50-69 years. Ab¬normal total cholesterol and Low Density Lipoproteins were found more in male subjects and abnormal High Density Lipoproteins and triglycerides were found predominantly high in female subjects. Approximately 62% of study participant were obese and overweight, only 34 out of 92 participants were doing physical activity, nearly 91.3% were belonged to lower socioeconomic class and among male participants 32 of them were current smoker. The result indicated that as the age increases, the risk of CVD raises. our study showed that the common risk factors among our subjects without comorbidity were age, obesity and over-weight, dyslipidemia, physical inactivity, low socioeconomic status and smoking.

Sawant AM, Shetty D , authors. Prevalence of dyslipidemia in young adult Indian population. The Journal of the association of Physicians of India. 2008;56(2):99–102

Hadley J , author. Sicker and poorer-the consequences of being uninsured: a review of the research on the relationship between health insurance, medical care use, health, work, and income. Med Care Res Rev. 2003;60(2):S3–75