Direct oral anticoagulants (DOACs) like dabigatran are new generation of oral anticoagulants, for the prevention and treatment of acute and chronic thromboembolic diseases. The pharmacokinetics of dabigatran is predictable. Dabigatran does not require routine monitoring which make it more convenient alternative to warfarin to reduce the risk of systemic embolism and its resistance has been reported rarely in the literature. We report a case of probable dabigatran resistance here.

Dabigatran, a direct thrombin inhibitor (DTI), was the first widely approved drug in new generation of oral anticoagulants, for the prevention and treatment of acute and chronic thromboembolic diseases. Direct oral anticoagulants (DOACs) like dabigatran do not require routine monitoring or dose adjustment and they have short half-lives, no food interactions, and relatively few drug interactions which make them more convenient alternatives to warfarin to reduce the risk of systemic embolism.1 Dabigatran causes lesser bleeding than warfarin.2 The pharmacokinetics of Dabigatran is predictable and its resistance has been reported rarely in the literature.3 We report a case of probable Dabigatran resistance here.

A 26 year old tobacco chewer and physically active male presented to our centre with complaints of effort dyspnoea and bilateral lower limb swelling. His complaints started 6 months back when he noticed swelling in his right calf. This swelling increased gradually and became painful. He started taking over the counter available painkillers for this painful swelling. Meanwhile, patient’s swelling and pain continued to aggravate. On consulting his primary care physician a diagnosis of right lower limb deep vein thrombosis was made. The physician started him on subcutaneous injection of low molecular weight heparin (LMWH) 0.6 cc twice daily along with oral dabigatran 150 mg twice daily in an overlapping manner. After this, overlap phase of ten days, patient was maintained on oral Dabigatran 150 mg. Patient’s symptoms gradually relieved with the treatment and his swelling subsided. Patient was advised to continue Dabigatran therapy. But after 2 months of initiation of the drug, the patient noticed de novo swelling of left calf. The swelling increased gradually with additional development of pain. Patient also started developing effort dyspnoea which increased gradually in severity. He again consulted the same physician, who referred him this time to our centre. On presentation, to the emergency department (ED) he was hemodynamically stable. On auscultation, his chest was clear, and heart sounds (S1, S2) were heard normally. There was no S3 or any other abnormal heart sounds. The patient was in normal sinus rhythm (Figure 1) and his chest x-ray revealed no gross abnormality except for prominent pulmonary arteries. (Figure 2). His two dimensional echocardiogram showed multiple homogenous masses in Right Atrium (RA), Right Ventricle (RV) and Pulmonary Artery (PA) (Figure 3a and 3b). Right heart evaluation revealed a pulmonary acceleration time of 67 ms (suggestive of pulmonary artery hypertension) and tricuspid annular systolic excursion (TAPSE) of 14 (suggestive of RV dysfunction). His creatinine clearance was 67 ml/min. CT Pulmonary Angiogram showed saddle thrombus at pulmonary artery bifurcation (Figure 4a), RA as well as RV thrombus (Figure 4b). His left lower limb Doppler (Figure 5) findings were suggestive of deep vein thrombosis involving left femoral, popliteal and iliac veins. He was diagnosed as a case of pulmonary embolism with RV dysfunction with DVT (bilateral Lower limbs). He was thrombolysed with intravenous reteplase. Afterwards, subcutaneous Low Molecular Weight Heparin therapy was initiated. He was repeatedly asked about adherence to the drug therapy and he confirmed full compliance to drug. His physician had informed him about the cost and short duration of action of drug which mandate strict drug adherence. As the patient developed embolism while he was on Dabigatran, question of Dabigatran failure came into the picture. So we planned to initiate Warfarin therapy in the patient. His symptoms improved dramatically with this regimen. His baseline PT INR was 1.0 and APTT was 28 seconds. Warfarin was increased upto 7 mg (once a day dosing) to achieve therapeutic PT INR levels. Thereafter, patient was maintained on Warfarin 7 mg. Patient was doing well on oral Warfarin at 2 months follow up.

12 Lead electrocardiogram of the patient. 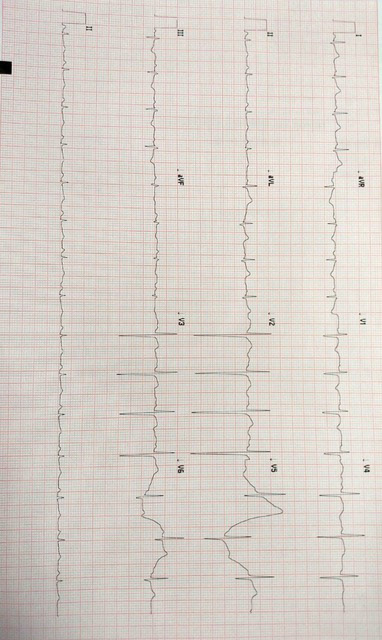 Chest X-ray Postero-Anterior view of the patient without any gross abnormality except for prominent pulmonary artery. 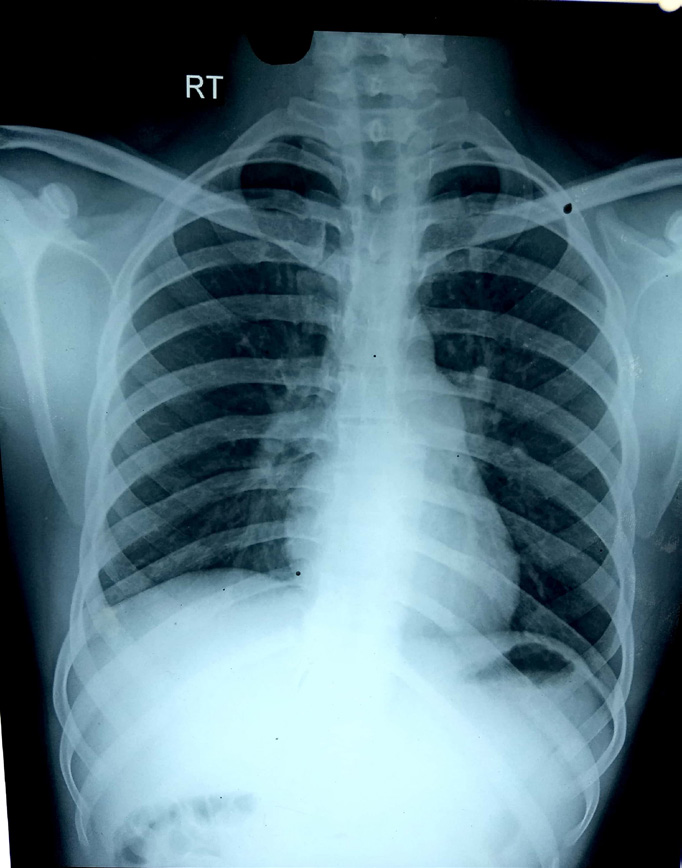 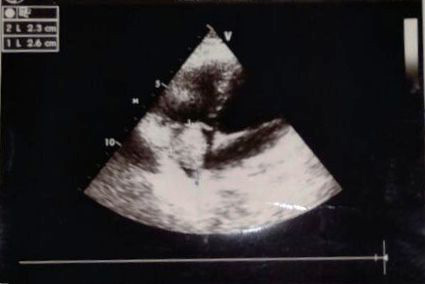 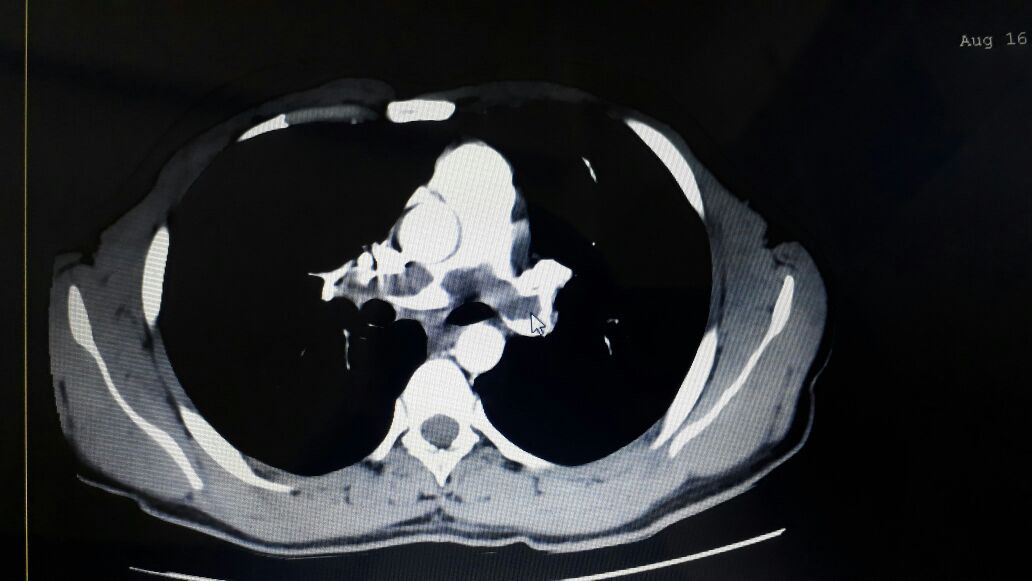 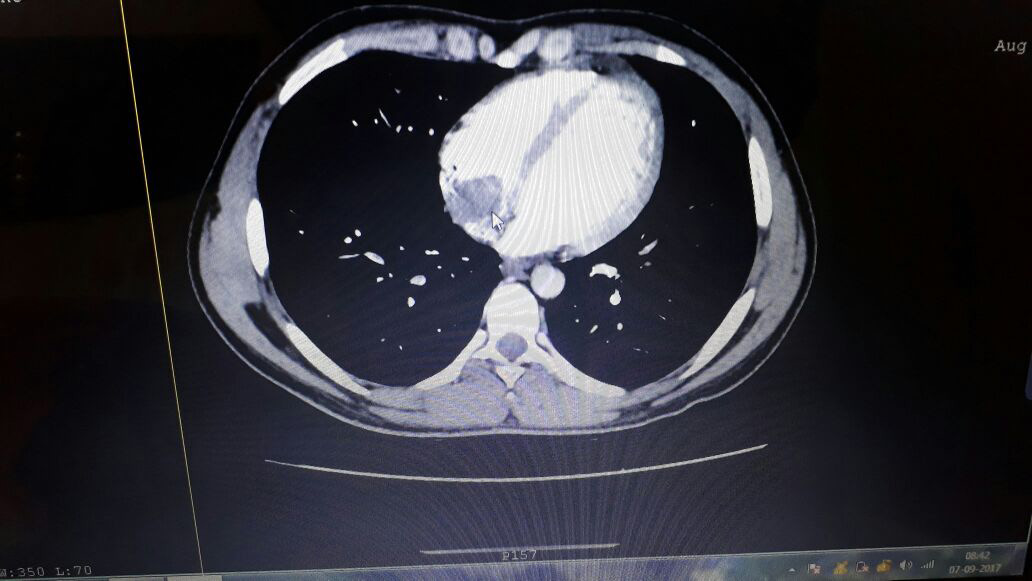 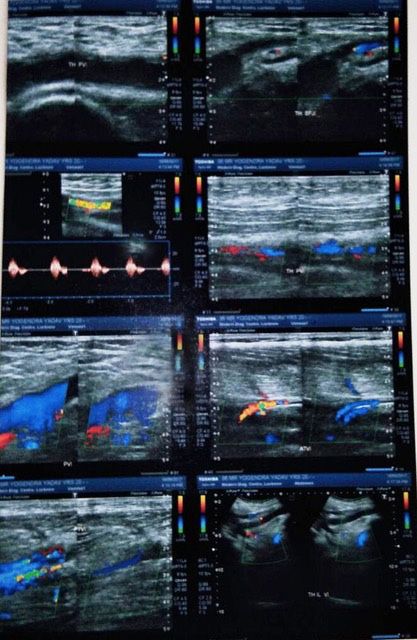 Dabigatran is approved by United States Food and Drug Administration (US FDA) for the treatment of deep venous thrombosis (DVT) and pulmonary embolism (PE) in patients who have been treated with a parenteral anticoagulant for 5-10 days.4 RE-COVER II, study confirmed the results of RE-COVER, with non-inferiority of Dabigatran to Warfarin in the prevention of recurrent VTE and with superiority of Dabigatran for clinically relevant bleeding and for any bleeding.2,5 Subgroup analyses of the pooled data indicated no need for dose adjustment of Dabigatran according to demographic characteristics in RECOVER II trial.

Pharmacokinetics of Dabigatran are predictable and hence routine coagulation monitoring is not needed. In our case, the patient was on Dabigatran for quite a good time period and was compliant to the drug and yet he developed de-novo deep vein thrombosis of the contralateral lower limb and pulmonary embolism.

Potential errors in the diagnosis can be made as it is difficult to differentiate a thrombus from a tumor in echocardiography and CT scan readings. But certain features like size, shape, mobility, presence of a stalk, location, presence of a thromboembolic evidence elsewhere in the body are very helpful in making a diagnosis. In our case, presence of DVT in lower limbs (as a precipitating factor for development of PE) strongly suggested the thrombogenic nature of the mass. Absence of a stalk in the mass was also in favour of a thrombus. He was repeatedly asked about adherence with the prescriptions advised to him to ensure compliance with the Dabigatran. The patient was not taking any other drug so question of any drug interaction was ruled out.

Reason of therapeutic failure of Dabigatran in this case seems to be a form of Dabigatran resistance. Various coagulation assays can be used to measure the anticoagulant effects of directly acting Oral Anticoagulants (DOAC’s) but no reliable investigation is mentioned in literature to state dabigatran resistance (Table 1). But as the patient was compliant to the recommended doses of the drug, possibility of some sort of resistance to the Dabigatran cannot be ruled out. Hypercoagulable state seems to be a second potential cause in this case. This case presents new challenges in this era where new oral anticoagulants are considered very promising in various studies. Development of new easily accessible and affordable methods to assess pharmacokinetics and methods to monitor pharmacodynamics are needed to overcome this situation. On the other hand, clinical response can be used as a method to assess therapeutic effect of a drug retrospectively. In literature, resistance to antiplatelet drugs like aspirin, clopidogrel refers to the continued occurrence of ischaemic events despite adequate antiplatelet therapy and compliance.6-7 Dabigatran resistance has not been studied much. It can be defined in the similar manner. So, dabigatran resistance should be considered in a patient developing thromboembolic event despite of taking recommended doses of dabigatran.

Various coagulation assays that can be utilized to confirm therapeutic efficacy of DOAC’s.8

Dabigatran is approved for prevention and treatment of venous thromboembolism. It’s stable pharmacodynamics obviate the need for regular monitoring unlike warfarin. Occurrence of thromboembolic episodes while on optimal doses of the drug raises the concern of possible resistance. Though rarely reported in literature, there is no universal definition and precise methods for diagnosis are lacking unlike antiplatelet resistance.